With the elimination of the Montreal Canadiens from the playoffs last week, Canada will extend its streak to 20 NHL seasons without a Stanley Cup. But Canadian hockey fans might have a mild rooting interest in the outcome of the Stanley Cup Final in favor of the New York Rangers. If the Los Angeles Kings win, it would move the Stanley Cup Center of Gravity further in the direction of the United States. 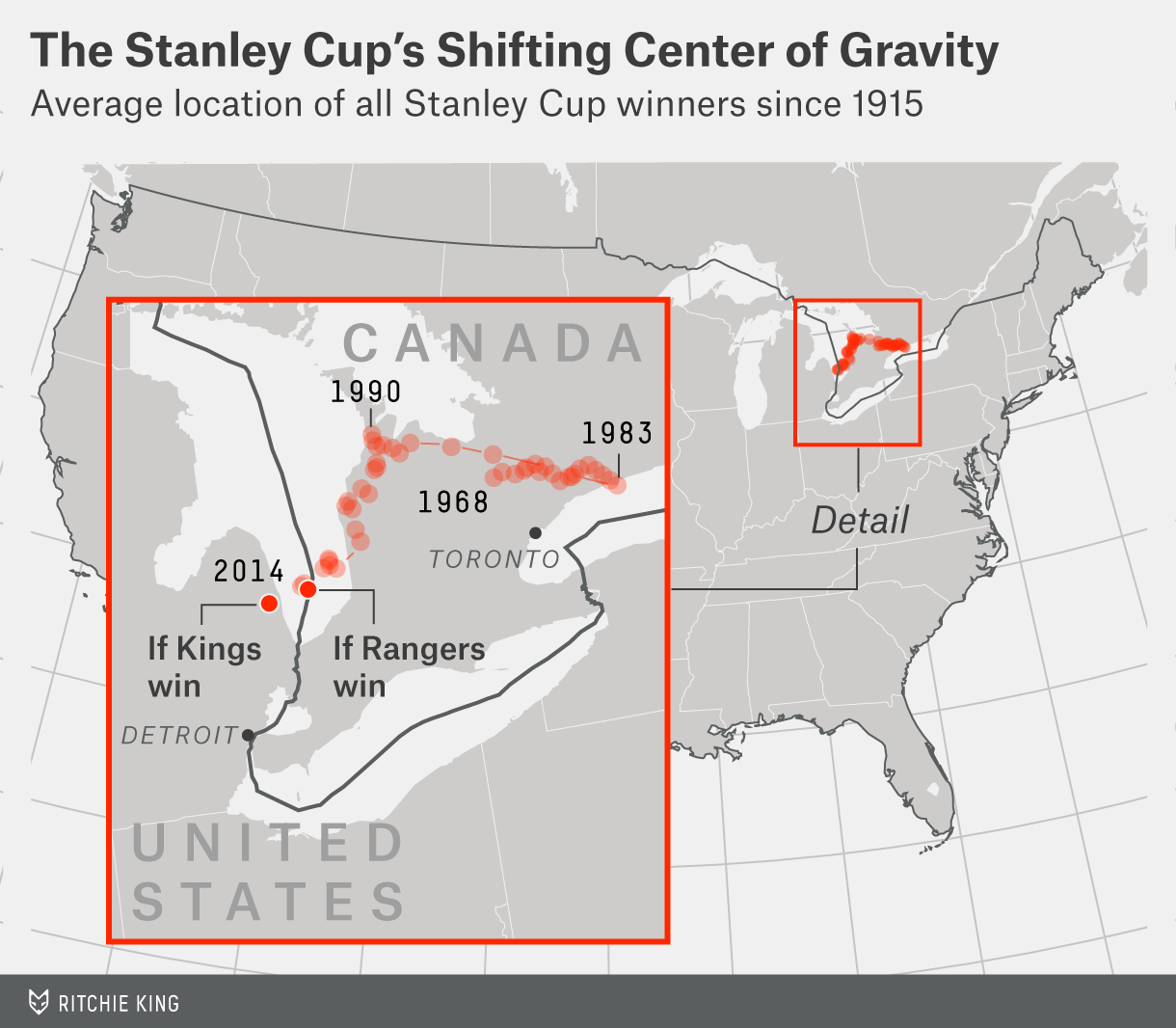 What the H-E-double-hockey-sticks is the Stanley Cup Center of Gravity? It’s a concept we came up with, which is calculated by averaging the geographic location of all Stanley Cup winners. (There’s some room for debate about which team qualifies as the first champion, but we date the series back to 1915 and the Vancouver Millionaires.)

After 1968, for example — the first Stanley Cup contested during the NHL’s expansion era — the Stanley Cup Center of Gravity was in southern Ontario, a little to the northwest of Toronto. It steadily moved eastward through 1983, with teams such as the Canadiens, the Boston Bruins and the New York Islanders winning the Stanley Cup consistently. At one point, it breached the shores of Lake Ontario.

The rest of the 1980s saw a sharp shift in a west-northwest direction, as the Edmonton Oilers won five Stanley Cups and the Calgary Flames added another. As of 1990, the Stanley Cup Center of Gravity was somewhere near Owen Sound, Ontario.

The long streak of U.S.-based winners has since moved the Center of Gravity to the south-southeast. It crossed into Lake Huron a few years ago. And, after the Kings won their first Stanley Cup in 2012, it shifted to the American side of the maritime border. U.S.A.!

A Rangers win would move the Center of Gravity eastward toward Ontario — not enough to bring it back into Canadian waters, but it would be close. By comparison, another Kings win would shift it to the south and west, putting it on the U.S. mainland for the first time in many decades — near Sandusky, Michigan.

P.S. Ever hear the one about the statistician who drowned crossing a river that was 3 feet deep, on average?