At FiveThirtyEight, we use census data all the time to track demographic and social trends, from the aging of the U.S. population to the decline in marriage and shifts in immigration patterns. But the census not only reveals societal changes, it responds to them. This week, we’re examining three changes the Census Bureau is considering for its 2020 questionnaire. In the first two installments, we looked at the proposed changes to the way the census counts people of Arab ancestry and same-sex couples. Here, in our final article: The bureau ponders a new way of asking about Hispanic ethnicity.

Nancy Lopez considers herself Latina — more specifically, Dominican. But she knows that when she walks down the street, many strangers see her as something else: a black woman.

“Race is not one-dimensional,” said Lopez, a sociologist at the University of New Mexico and co-director of the school’s Institute for the Study of Race and Social Justice. “It’s multidimensional.”

The census has struggled to capture that complexity for its entire history, from 19th-century battles over how to count free black Americans to more modern efforts to categorize the U.S.’s growing mixed-race population. Now as it prepares for its 2020 population count, the Census Bureau is considering its biggest change in decades: combining its questions about race and ethnicity into a single, all-encompassing question.1 Lopez could still, as she did in 2010, mark herself as black and Latina. But she could also select just one category – an option many U.S. Hispanics have said better reflects their self-identity.

That may seem like an academic distinction, but there are significant real-world implications, too. The government uses census data to help draw congressional boundaries, protect voting rights and allocate federal grant dollars. Researchers use it to track discrimination and social trends. And advocacy groups use it to secure political influence.

For decades, the federal government — like most researchers — has distinguished between two concepts: race and ethnicity. “Race” refers to physical attributes (skin color, facial structure and the like), while “ethnicity” is tied to culture and ancestry. So someone might be racially white and ethnically Italian, or, in Lopez’s case, racially black and ethnically Dominican.

Since 1980, the census has included separate questions about race and about Hispanic/Latino ethnicity.2 But in practice, the lines between race and ethnicity are often blurry and are becoming more so. Many Latinos, in particular, don’t consider themselves black or white. Of the 48 million Americans who reported being “Hispanic or Latino” in the 2010 census, only about half chose one of the officially recognized racial categories. Some 14.5 million chose “some other race,” and 6 million didn’t provide an answer.3 Many wrote in answers such as “Mexican,” “Hispanic” or “Latin American,” which are officially considered ethnicities. Roberto Ramirez, head of the Census Bureau’s Ethnicity and Ancestry Branch, said Latinos “either skip the question or they’ll say that they’re Mexican again.” 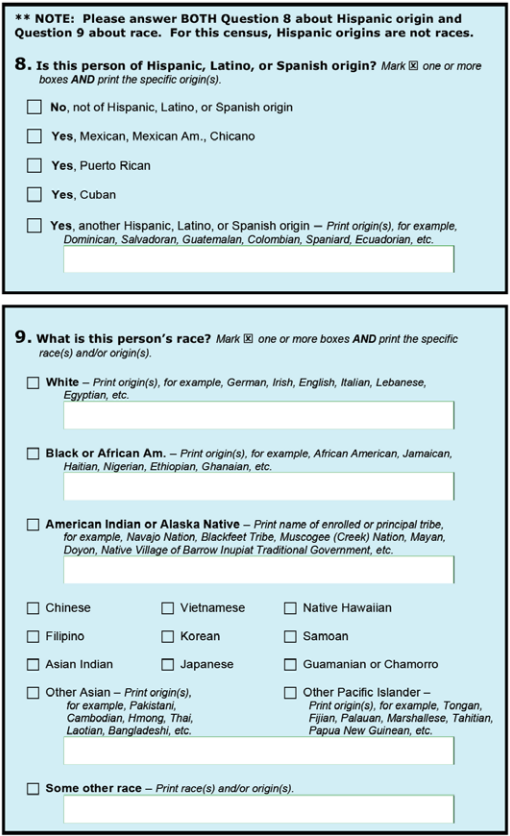 To the Census Bureau, and to many of the researchers who use its data, that’s a problem. The Office of Management and Budget (OMB), which sets the federal government’s standards for racial and ethnic categories, doesn’t consider “some other race” to be an official category, which means the Census Bureau has to assign a race to people who don’t answer. That introduces another source of error into the data. And though independent researchers don’t have to worry about the OMB’s official categories, “other” doesn’t do them much good either.

The bureau’s proposed solution: combining the race and ethnicity questions into one. The question would allow respondents to select from several categories4, and then write in more detailed responses below. Respondents could choose more than one category. 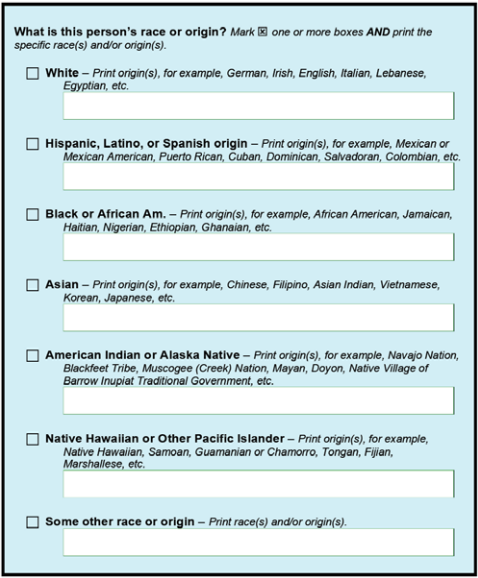 This would be only the latest in a long line of changes to the way the census asks about race. Early censuses distinguished between whites, slaves and “other free persons.” In 1850, on the eve of the Civil War, the census included three racial categories: white, black and “mulatto.” In 1890, the categories included not just mulatto but “quadroon” and “octoroon.” It wasn’t until 1970 that respondents selected their own race, rather than having it assigned by a census worker, and it wasn’t until 2000 that people could choose more than one race.5

In the past, critics have accused the Census Bureau for making changes without sufficient research. This time, the bureau is taking no chances. It has conducted tests and focus groups on the proposed change, and is planning another large-scale test for next year. The tests so far have found that the combined question reduces the number of Latinos selecting “some other race” while not reducing the number of people reporting that they are Hispanic or black.

“The respondents have told us, ‘I like this question. I found myself more easily,’ ” said Nicholas Jones, director of race and ethnic research and outreach for the Census Bureau.

But Hernandez, the Fordham law professor, said that although it’s true that many Hispanics don’t identify strongly with one race or another, it isn’t necessarily a reason to change the way the census asks about the subject.

“The census is not a platform for me to express my personal identity,” Hernandez said. “The census is where I get to put what is relevant for our pursuit of equality.”

Hernandez noted that the Census Bureau’s own test found that the combined question reduced the number of people saying they belonged to certain detailed Hispanic groups, such as Mexican or Cuban. That could make it harder to study those groups, she said, because we wouldn’t have complete data on them. And she worried that the proposed design could discourage researchers from looking at how race and ethnicity overlap. Research, for example, has shown that darker-skinned people of any ethnicity endure more discrimination than lighter-skinned people of the same ethnicity.

Other researchers are more ambivalent. In a new report, the Leadership Conference Education Fund, a civil rights organization, praised the Census Bureau’s attempt to improve its data collection but stopped short of endorsing the single-question approach. Among the group’s concerns: the risk that the change would make it difficult to track changes over time, because data from the 2020 and 2010 censuses wouldn’t be directly comparable.

Arturo Vargas, executive director of the National Association of Latino Elected and Appointed Officials, an advocacy group that was one of the sponsors of the Leadership Conference report, said the status quo isn’t working. But as to whether the Census Bureau’s plan is the best solution, Vargas demurred.