At FiveThirtyEight, we use census data all the time to track demographic and social trends, from the aging of the U.S. population to the decline in marriage and shifting immigration patterns. But the census not only reveals societal changes, it responds to them. This week, we’re taking a look at three changes that the Census Bureau is considering for its 2020 questionnaire. First up: the proposed addition of a new racial category for Arabs.

The first time Rashad Al-Dabbagh saw a census form, he didn’t know how to respond.

Sex? Male. Age? 20. But race? Al-Dabbagh, who moved to the United States from Saudi Arabia in 1998, scanned the 2000 census form looking for himself. He wasn’t white or black or Chinese or Samoan or any of the 10 other categories listed.

“I went through it and looked for Arab or Middle Eastern or Palestinian or anything I could identify with and there was nothing,” Al-Dabbagh said. “So I filled the ‘other’ box.” Beneath it, in the space provided, he wrote, “Arab.”

The next time he fills out a census form, Al-Dabbagh may not have to search so hard. The Census Bureau is considering adding a “Middle Eastern/North African” category to its questions on racial and ethnic background in the 2020 census. 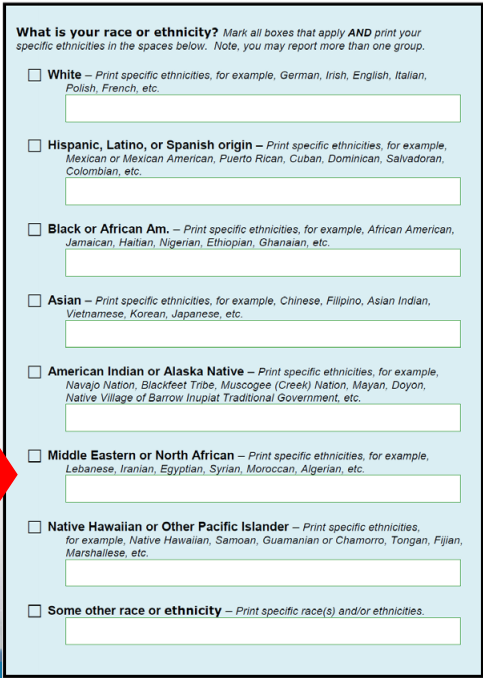 There is more than identity at stake. The government uses census data to help track discrimination in housing and employment, to draw congressional district boundaries and to allocate federal funds. Researchers use it to investigate racial disparities in income, education and health. And advocacy groups say accurate data is especially important at a time when Americans of Middle Eastern origin have been targets of discrimination, hate crimes and government surveillance.

Al-Dabbagh, who serves on the board of the Network of Arab-American Professionals, a national nonprofit, said the numbers are critical for another reason: political power.

“I work a lot with elected officials, with city officials, and they always ask us how many Arabs work in this area or in this city, and I don’t know,” Al-Dabbagh said. “I can never give an official, accurate number.”

Without a solid number, Al-Dabbagh said, it’s hard to convince elected leaders to take Arab-Americans’ priorities seriously — especially when they’re competing for funding with groups that do have a clear count. Better data, Al-Dabbagh said, “will translate into influence, funding, and I believe that it’s a vehicle of empowerment for the Arab community.”

The Census Bureau does provide an estimate of the number of Arabs in the U.S.: 1.8 million as of 2013.1 But since there’s no Arab category on the main census form, that figure is based on a separate question about “ancestry or racial origin” on the much smaller American Community Survey. The Arab American Institute Foundation, an advocacy group, believes the census’s estimate is far too low, something the Census Bureau doesn’t dispute. The Institute puts the figure at about more than double the government number — at 3.7 million.

“We know with a certainty that there has always been a dramatic undercount, and the simple reason for that is that there’s no real estate on the census form for us,” said Maya Berry, the Institute’s executive director.

The 2010 census asked two questions about racial and ethnic background: The first asked about whether a person was “of Hispanic, Latino, or Spanish origin.” The second asked about race and offered 14 categories, plus a 15th option for “some other race,” with an opportunity to write in an answer.

Officially, the Census Bureau considers Arabs to be white, and historically many Arabs have identified as such. In the early 20th century, Syrian immigrants argued in court that they should be considered white in order to avoid falling under laws that made it difficult for Asian immigrants to gain citizenship.2 In a 1909 editorial, The New York Times weighed the issue under the headline “Is the Turk a white man?”

“They are a cruel and massacring people, and they have lost none of their ancient proclivities,” The Times wrote. “But they are also Europeans, as much ‘white’ people as the Huns, Finns, and Cossacks.”

Many Arab-Americans still check “white” on the census. But in 2010 some Arab-American groups urged their members to choose “other” instead, using the slogan “check it right, you ain’t white.” Their hope was to help get a better count of the U.S. Arab population. Both Al-Dabbagh and Berry, who was born in Lebanon, said they don’t consider themselves white, or believe that they are perceived as white by the general public.

“I’ve always seen myself as a woman of color, that’s how I’ve always identified,” said Berry.

But Berry said that she knows many Arabs who do identify as white. The Arab American Institute has proposed adding a question to the census asking whether a person is “of Middle Eastern or North African origin.” Like the current question on Hispanic origin, the question would be distinct from the separate question on race, meaning Arabs could still check “white” or any other racial category.

The census is instead considering a more dramatic change that would combine the race and ethnicity questions into one and add a “Middle Eastern or North African” category.3 As they can now, respondents could choose multiple racial or ethnic categories. The proposal must still be approved by the Office of Management and Budget and, ultimately, by Congress.

Robert Kominski, a Census Bureau demographer, said that whatever the final form of the question, it’s important that the census keep up to date with people’s changing self-identification when it comes to race and ethnicity.

“People want a box to check,” Kominski said. “The worst thing is for people to say, ‘I’m not anywhere on the question.’”

Even if the new question is added, however, it may not immediately resolve the under-counting issue. Some Arabs have expressed reluctance to identify themselves on a government form, especially after the Census Bureau shared detailed data on the Arab-American population with the Department of Homeland Security in the early 2000s. Samia El-Badry, an Egyptian-born demographer in Texas, said it will take time for Arabs and Arab-Americans to become comfortable checking the new box.

“There are going to be political considerations in checking a box that says I’m from Egypt or I’m from Lebanon or I’m from Iraq or Libya. Those are hot potato countries,” El-Badry said. “This is going to take a few censuses before people say, ‘Yeah, this is OK.'”