In 1994, California Governor Pete Wilson aired television ads showing people scrambling across the Mexican border near San Diego. “The rules are being broken,” a narrator intoned. “Pete Wilson has had the courage to say enough is enough.” Wilson, who at one point trailed in the polls, ended up cruising to an easy re-election.

Two decades later, the rhetoric around immigration hasn’t changed much — just look at Virginia, where long-shot challenger Dave Brat upset Eric Cantor in part by promising to “secure the border” and “reject any proposal that grants amnesty” to undocumented immigrants.

But while the rhetoric has stayed largely the same, immigration hasn’t. The immigration debate, now as then, focuses primarily on illegal immigration from Latin America. Yet most new immigrants aren’t Latinos. Most Latinos aren’t immigrants. And, based on the best available evidence, there are fewer undocumented immigrants in the U.S. today than there were in 2007. Even the latest immigration crisis — a sudden influx of unaccompanied minors, for which President Barack Obama requested $4 billion in emergency funding to address on Tuesday — represents a break from past patterns: The children are from Central America, not Mexico, and are primarily escaping violence in their home countries, rather than seeking jobs in the U.S.

The immigration debate gets one thing right: The foreign-born population is growing. In 2012, according to data from the Census Bureau, there were more than 40 million people living in the U.S. who weren’t born here, up 31 percent since 20001; the native-born population grew just 9 percent over that time. The foreign-born now represent 13 percent of the population, near a historical high. The drivers of that growth, however, have changed significantly in recent years. 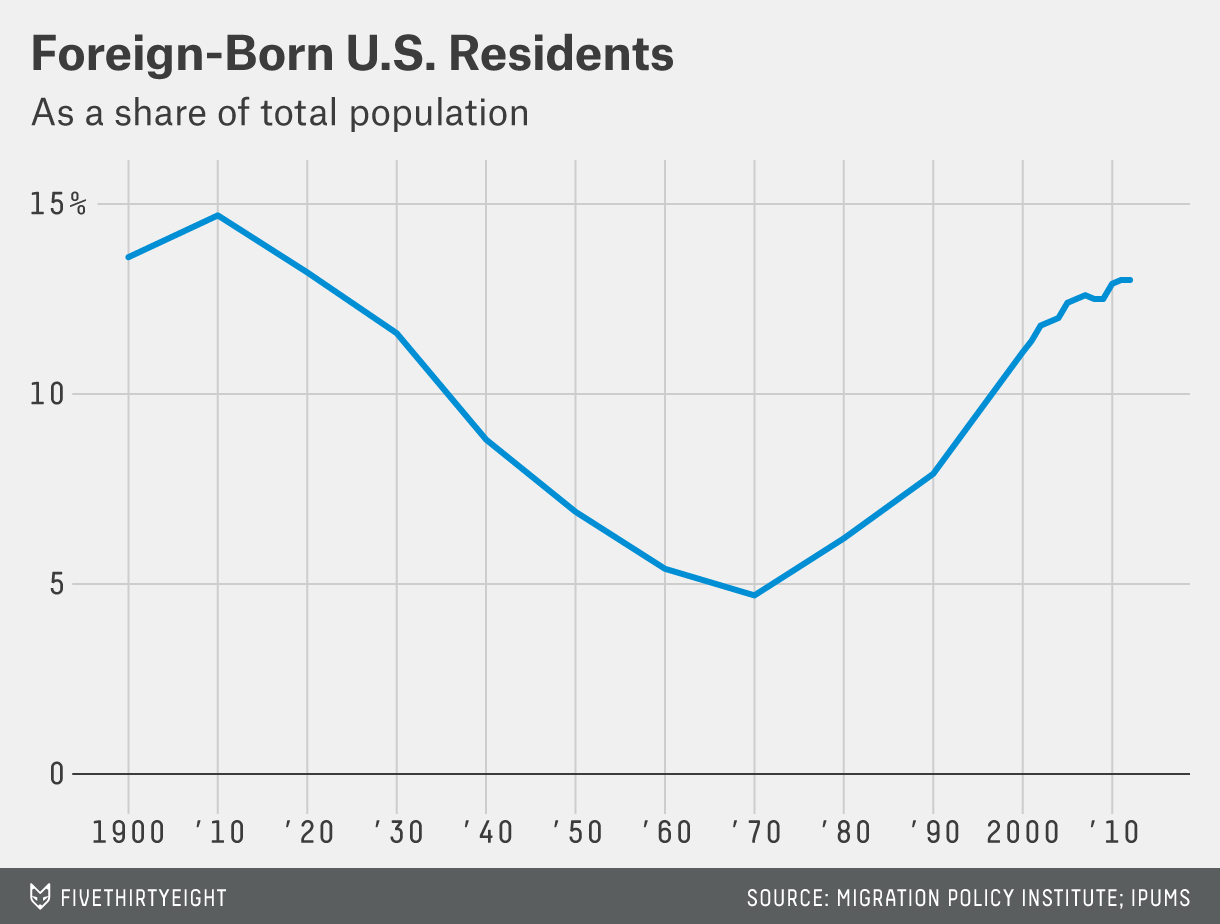 When Pete Wilson aired his ads in 1994, the U.S. was in the midst of a massive wave of immigration from Mexico. In 1980, there were 2.3 million Mexican-born immigrants living in the U.S.2 Over the next decade, that number nearly doubled, to 4.4 million; then it doubled again, to 9.3 million, by 2000. By 2007, about 12 million U.S. residents were born in Mexico; the majority were in the country illegally.

But in the mid-2000s, the surge began to ebb. Demographers cite several factors: A long decline in the birthrate in Mexico meant there were fewer young Mexicans seeking jobs north of the border. Improvement in the Mexican economy meant there were better opportunities closer to home. Tightened border security and increased deportations likely also played a role.

Then the recession hit, and turned a gradual decline into a steep drop. Construction jobs, a major source of employment for Mexican migrants, all but disappeared, and many other jobs also became scarce. As a result, immigration slowed, and many Mexicans living in the U.S. went home. By 2010, net migration from Mexico — the number of immigrants minus the number of emigrants — had fallen roughly to zero, and may even have turned negative, according to the Pew Research Center. 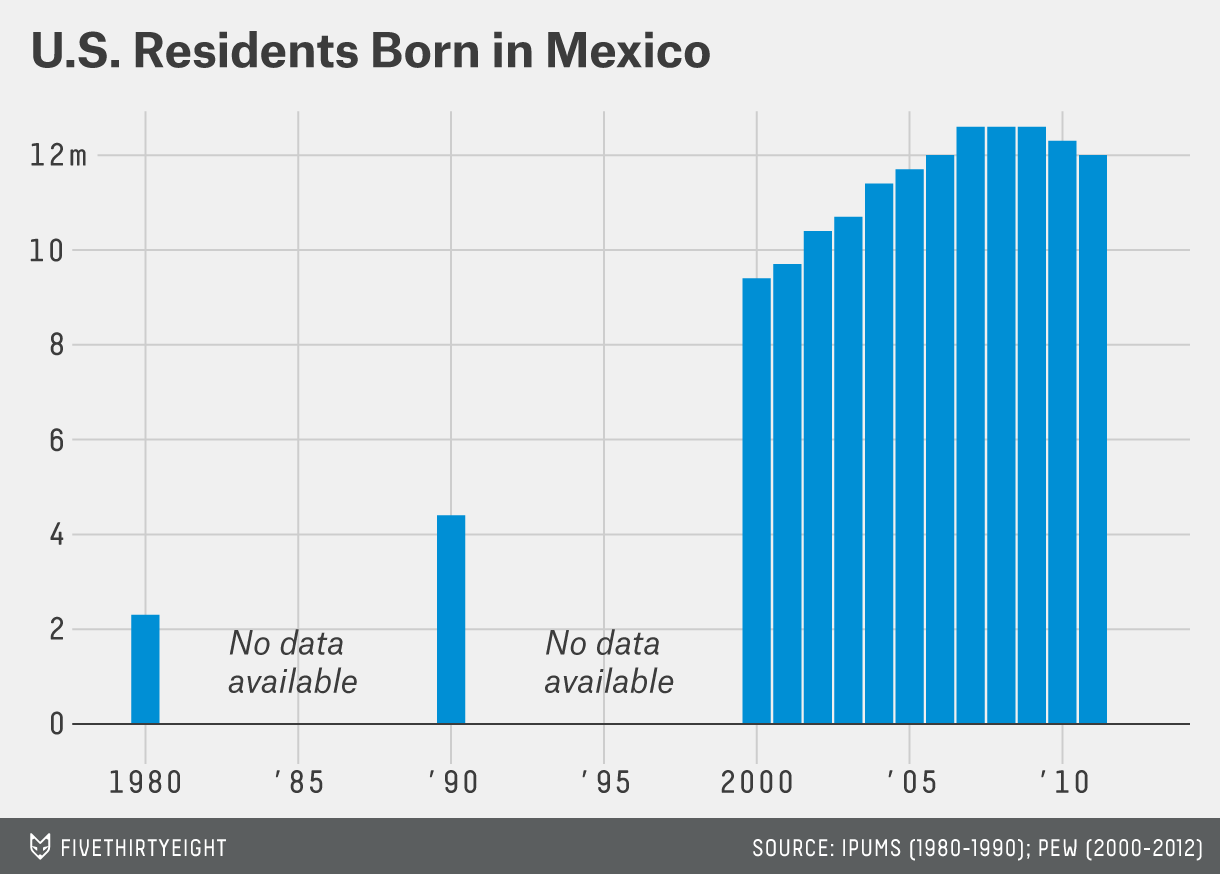 Mexican immigration has rebounded some as the U.S. economy has improved, but it’s still well below its early-2000s peak, and few experts expect it ever to rebound fully. “It’s now history,” Dowell Myers, a University of Southern California demographer, said of the immigration wave of the early 2000s. “It’s the peak level of Latino migration.”

As immigration from Mexico has been falling, migration from other countries has continued to rise. In the past five years, the number of new immigrants (those in the country less than a year) from China has risen 37 percent, to more than 70,000. Immigration from India and other Asian countries is also increasing, though at a more modest rate. 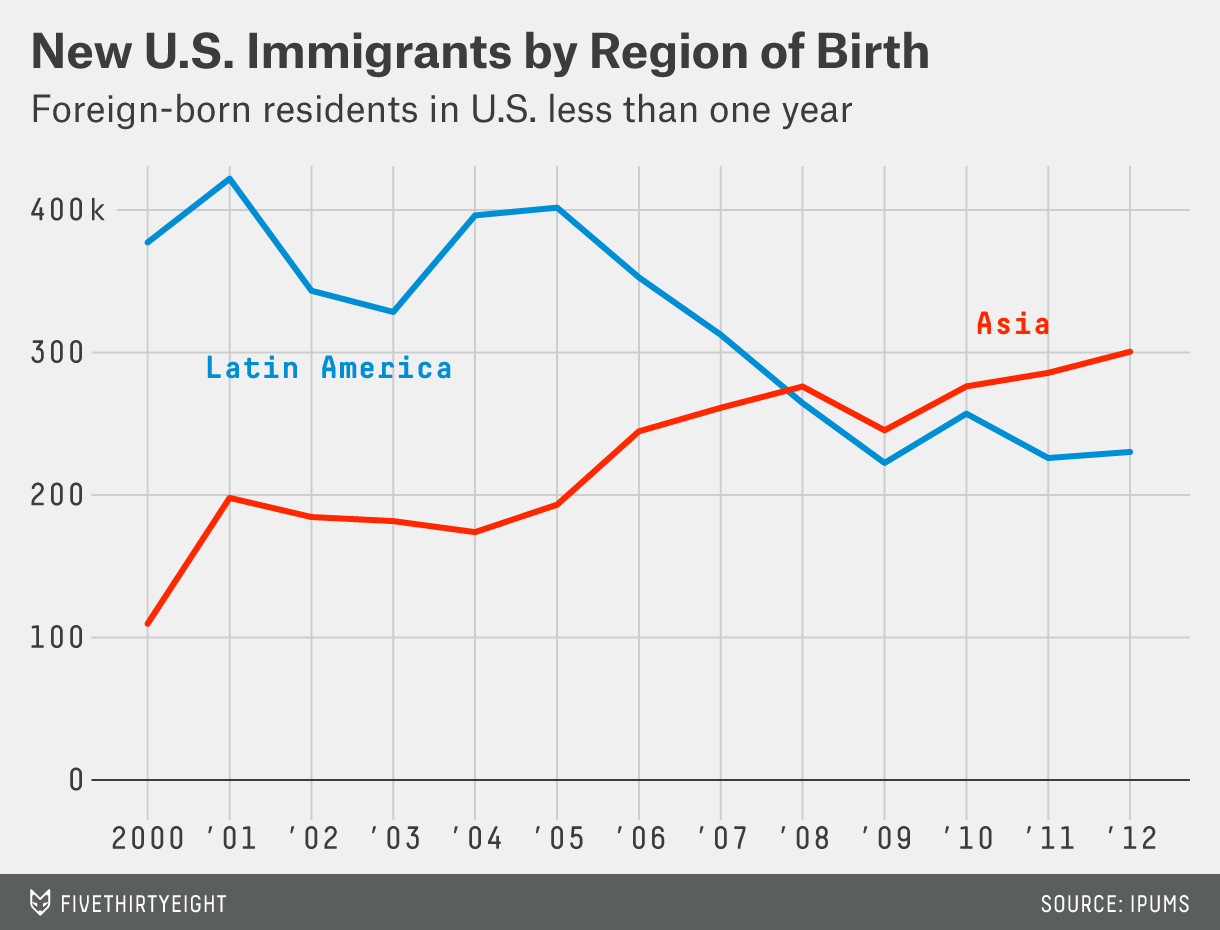 The immigration debate, of course, tends to focus on illegal immigration. There are in fact two separate debates about the undocumented: What to do about those who are here already, and how to prevent more people from entering the U.S. illegally. The two issues often get lumped together, but the data suggests the trends are very different.

Almost by definition, illegal immigration is difficult to track. But Pew has developed a well-regarded methodology for calculating the size of the unauthorized population, which essentially involves subtracting the number of legal immigrants from the total foreign-born population, subject to certain adjustments.5 According to Pew’s estimates, the undocumented population grew rapidly in the 1990s and early 2000s, rising from 3.5 million in 1990 to a peak of about 12.2 million in 2007. The total dropped during the recession, however, and has been roughly flat since then at about 11.7 million in 2012.6 A narrow majority — about 52 percent — are from Mexico, although a growing share are from Central America and, increasingly, Asia. 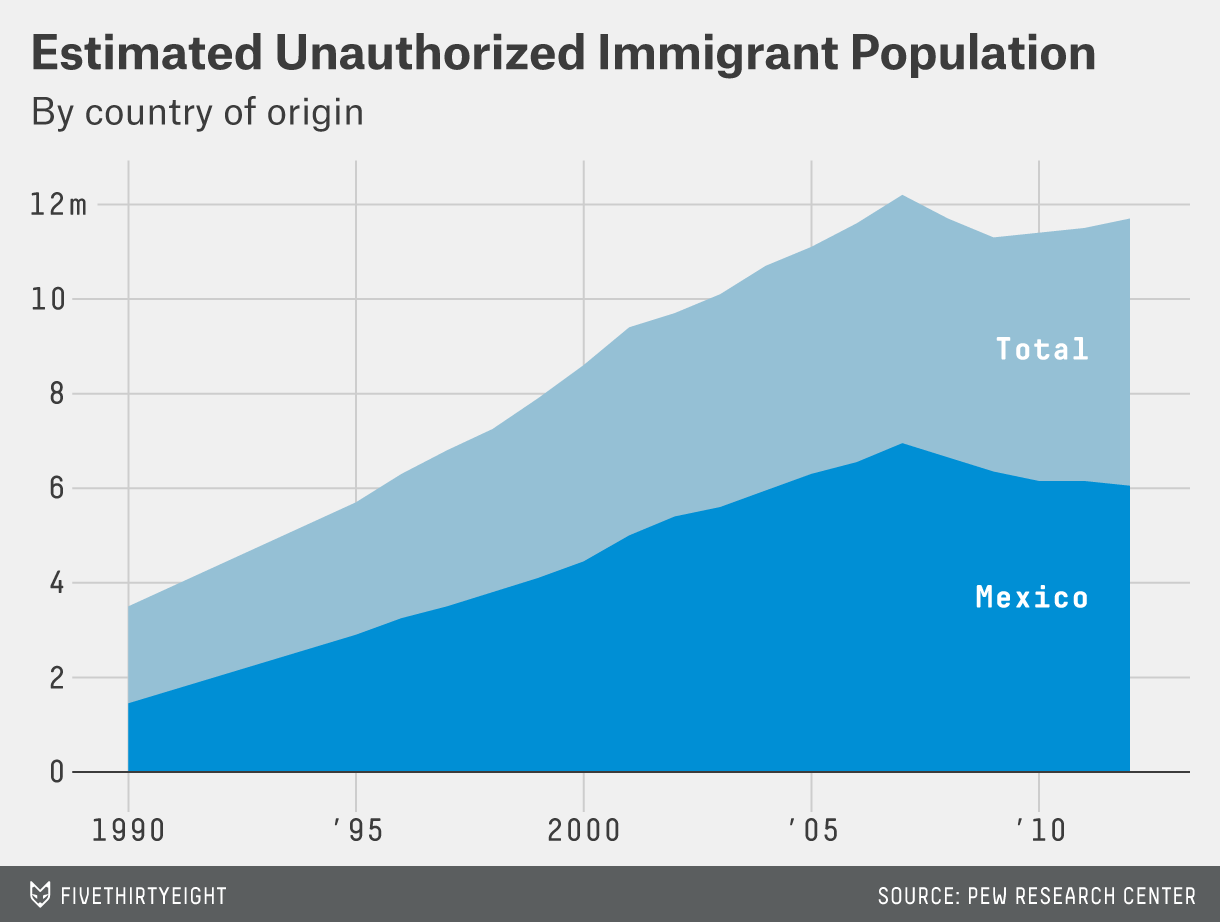 The question of what to do about existing undocumented immigrants remains highly relevant. There are nearly 12 million of them here, close to an all-time high. But at least for much of the past few years, the issue of securing the border has been all but moot: Between 2007 and 2012, more undocumented workers left the country than entered it.7

Whether that trend will continue is less clear. In recent months, tens of thousands of unaccompanied minors, most of them from Central America, have crossed the Mexican border. And it’s possible that as the job market rebounds, so will the number of people trying to enter the country illegally. But there’s so far little evidence of a more widespread resurgence in illegal border crossings.

Despite the changing patterns of immigration, however, the public debate has continued to focus on illegal migration from Mexico. One reason for that is likely that people experience immigration on a local, not a national, level. And immigration, including undocumented immigration, is spreading to parts of the country where it was relatively rare just a few years ago.

Take Hazleton, Pennsylvania, a small coal-country city about an hour southwest of Scranton. In 2000, the city had fewer than a thousand immigrants, less than 4 percent of its population of nearly 25,000. A decade later, nearly a quarter of its residents are foreign-born, and a third of the population speaks Spanish.8 The sudden population shift has led to conflict: In 2006, the city passed an ordinance, the “Illegal Immigration Relief Act,” that aimed to punish landlords who rented to undocumented immigrants and employers who hired them. The mayor at the time, Louis Barletta, told the Washington Post that he wanted to make the city “the toughest place on illegal immigrants in America.” Federal courts blocked the law as unconstitutional and earlier this year the U.S. Supreme Court declined to hear the city’s appeal. 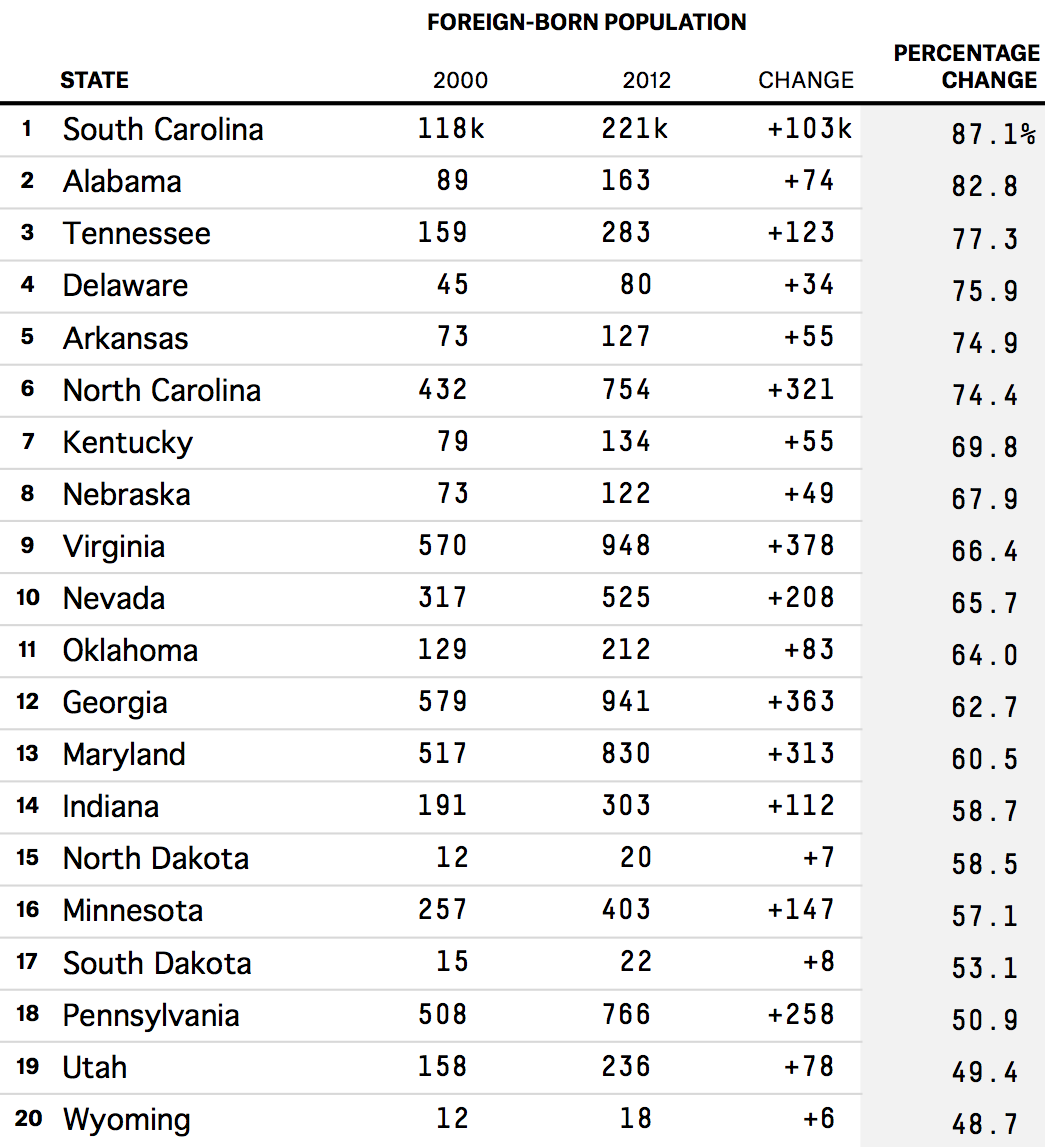 The geographic spread of immigrants is particularly striking in the groups that tend to draw the most political opposition: Immigrants who are here illegally or who don’t speak English. States like California, Texas and New Mexico that have long had large Spanish-speaking populations have seen a flattening-out or even a decline in the share of residents who don’t speak English fluently. Meanwhile states farther from the border, such as Washington state, New Jersey and Maryland, have seen big increases in their limited-English-proficient populations.

Undocumented immigration is spreading too. When Pete Wilson was running for re-election in the mid-1990s, California was the epicenter of illegal immigration, accounting for more than 35 percent of all unauthorized migration. Today, the state accounts for just over 20 percent of the national total, and its absolute number of undocumented immigrants has been trending down for several years. Other traditional immigration hubs such as Texas, Florida and New York have also seen the growth in their undocumented populations slow in recent years, and in some cases decline outright. Meanwhile, the number of undocumented immigrants in states outside those traditional hubs has increased nearly seven-fold since 1990, to 4.7 million people. As a result, people in many parts of the country are encountering immigration, including illegal immigration, for the first time.

The disconnect between perception and reality on immigration may be particularly stark right now, but it’s hardly unprecedented.

“Throughout the entire history of immigration, there was much more diversity within the flows in terms of origins, skills and other kinds of characteristics than you would think just by listening to the debates,” said Jeanne Batalova, a senior policy analyst at the Migration Policy Institute. “It’s fascinating how the history repeats itself nearly with the same language, which makes you both hopeful and disillusioned.”