After the Cleveland Cavaliers dropped Game 1 of the NBA Finals — and lost guard Kyrie Irving to injury in the process — things looked bleak for the team going into Sunday’s Game 2 matchup with the Golden State Warriors.

The undermanned Cavs were already the underdog against the Warriors (on a stage that’s especially unkind to underdogs). And they had to play on the road against an all-time great team without one of the few bright spots in an otherwise shaky supporting cast around LeBron James. Even if God doesn’t hate Cleveland, the Cavs’ chances of pulling even with Golden State seemed slim.

But Cleveland ended up defying those odds. It gutted out an ugly overtime win that, after taking into account the location of the game and the long-term talent of the players involved, ranks among the most unlikely NBA Finals victories of the past 30 years: 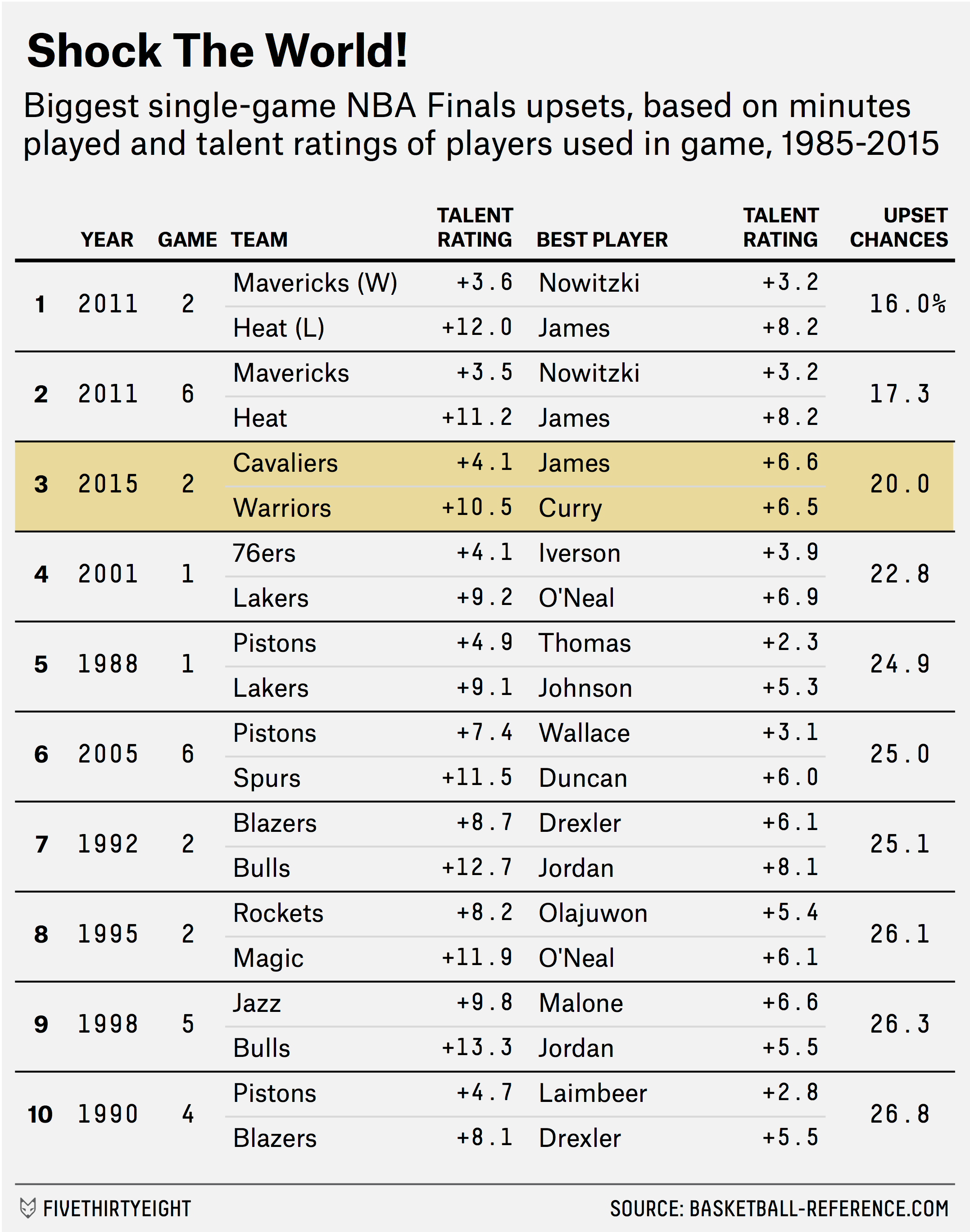 This isn’t the only way one could quantify an upset — though it is a good way to credit teams that overcame difficult talent disparities (many augmented by injury) in hostile arenas.1 And however you define an upset, it’s important to reassess the original prediction afterward. In the case of the underdog winners on that list, all but the 2001 Sixers and 1990 Pistons had already overachieved significantly in the playoffs, before the finals even began, relative to their regular-season Simple Rating System (SRS) scores.

In other words, there was already a solid sample of 15 or so games (which is actually a decent sample in the NBA) to suggest that these teams were capable of playing above the longer-term track records of their individual players. And going into the championship round, this year’s Cavs had established themselves as the sixth-biggest playoff overachievers (in terms of PPG margin relative to regular-season expectations through the conference finals) of any NBA finalist since 1985.

Even better news for Cleveland is that upsets of this magnitude do seem correlated with an increased chance of winning the NBA title. Since 1985, exactly half of finals teams that pulled off wins in games that they were 30 percent likely to win or less ended up winning the series. Granted, that number is a bit tautological: Some of those victories came later in the series — when games carry more leverage — and the winner of a series’ highest-leverage games is extremely likely to win the series itself.

But take into account the inherent value of stealing home-court advantage with a road win2 and the additional information an upset provides about the respective skill levels of each team, and for once, Cleveland might actually have a “team of destiny” on its hands, odds be damned.