The news wasn’t entirely unexpected, but it was still jarring to see that the Chicago Bulls had fired coach Tom Thibodeau on Thursday after five seasons at the team’s helm. After all, it isn’t every day that a team lets one of the best coaches in NBA history walk away.

Thibodeau reportedly had a strained relationship with the Bulls’ front office, so the firing is almost certainly related to more than the team’s on-court performance. (Bulls owner Jerry Reinsdorf practically said as much in a few pointed comments Thursday.) But even if the Bulls’ next coach is more in sync with management, the team might notice a distinct downturn in its play without Thibodeau in charge.

We can attempt to measure a coach’s influence by looking at how much his team wins relative to expectations set by preseason projections. And by that (imperfect) standard, Thibodeau during his time in Chicago has guided the team to about 36 more wins than would have been expected purely from its talent going into each season. 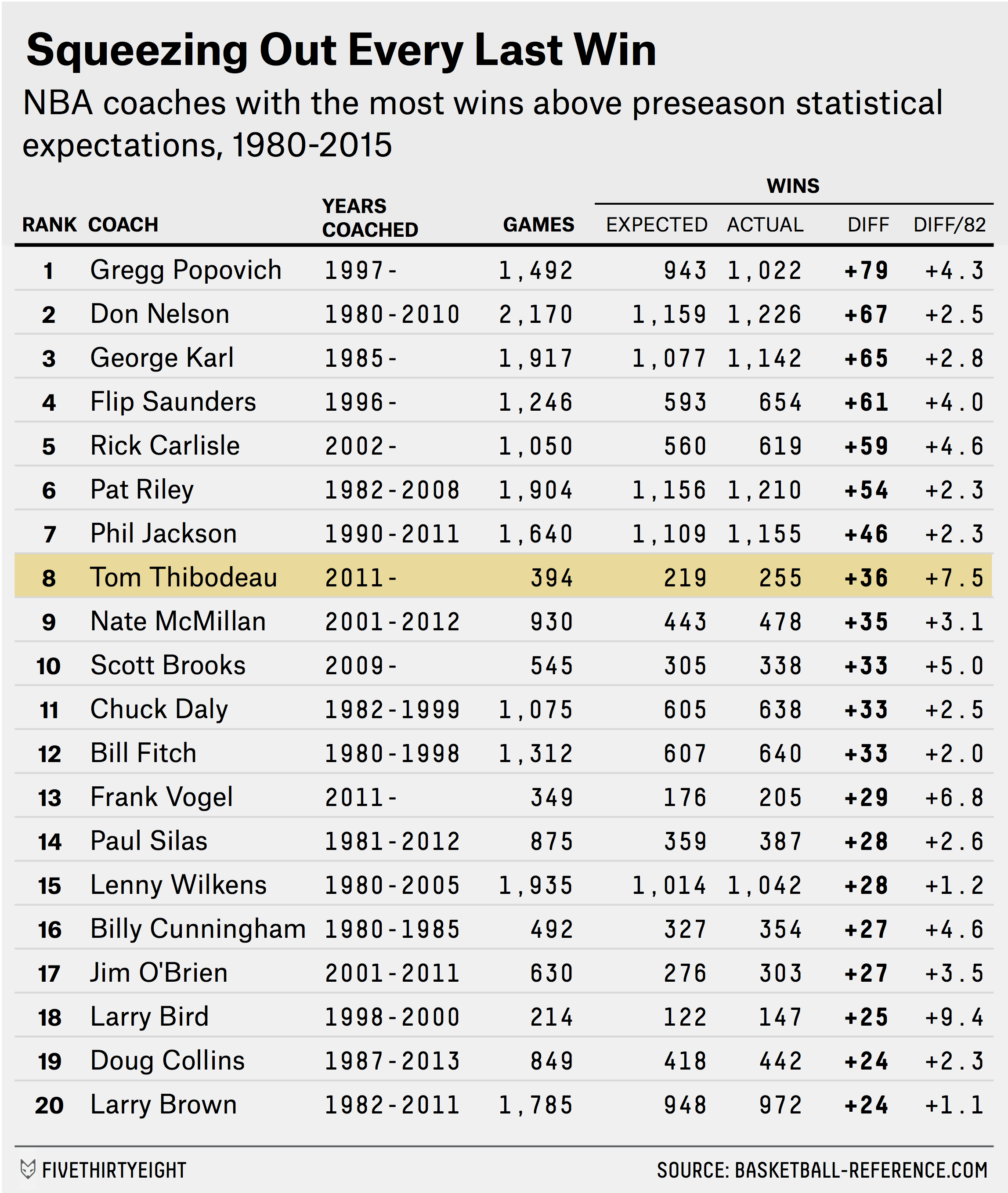 Thibs’s tally ranks eighth among all NBA coaches since the 1979-80 season, and he did it in far fewer games than his peers atop the list. Thibodeau added about 7.5 wins per 82 games (the standard length of an NBA season), the most of any coach with at least 300 games coached. Few coaches have squeezed more wins out of their talent than Thibodeau has in his short career.

Of course, there have been grumblings about Chicago’s playoff performance under Thibodeau after the team failed to advance past the second round of the postseason for the fourth straight season. But just as we looked at the Atlanta Hawks’ 2015 playoff run relative to expectations Wednesday, we can judge the Bulls’ dynasty points accrued relative to what would be expected from their preseason projections.

And Thibodeau’s Bulls teams have, on balance, gone further in the playoffs than they were projected to. During his tenure as Chicago’s coach, the Bulls have accumulated 625 dynasty points — 13.1 points more than would have been expected from the talent levels of his teams. (In 2015 alone, he racked up 40 more dynasty points than expected.)

That total “only” ranks 24th among NBA coaches since 1984,1 and it’s nowhere near the gaudy 6,606-point (!!) surplus generated by playoff god Phil Jackson, one of Thibodeau’s predecessors with the Bulls. But it flies in the face of the idea that the Bulls had a disappointing playoff record on Thibodeau’s watch.

Essentially, he extracted an incredible number of wins out of his talent base during the regular season and took the team a little bit further than expected during the playoffs to boot. Teams can get (and have gotten) a lot less from their head coach.

And maybe that’s why there’s a line of teams queuing up to potentially acquire Thibodeau’s services, now that the Bulls have cut him loose.