Was the Atlanta Hawks’ 2014-15 season a success or a disappointment? The answer depends on your perspective.

Judging by the playoffs alone, Atlanta — which entered the postseason as the Eastern Conference’s No. 1 seed — came up short. As the Hawks were swept out of the playoffs by the Cleveland Cavaliers in a 30-point loss Tuesday night, the team capped off one of the most disappointing playoff runs by a No. 1 seed in modern NBA history. (In full disclosure, I worked as a statistical consultant for the Hawks from June 2013 to July 2014.)

While Atlanta did reach the conference finals, its loss ultimately resulted in just 250 “dynasty points,” according to my system of measuring a team’s postseason success in proportion to how many teams it had to beat out. By comparison, all other No. 1 seeds since the NBA playoff field expanded to 16 teams in 19841 have produced an average of 526 dynasty points.

Moreover, the Hawks also posted the seventh-worst per-game point differential of any No. 1 seed in that span, relative to what would be expected from their regular-season Simple Rating System (SRS) score, those of their opponents, and the location and leverage index of each game. After Atlanta was humbled by a Cavs team it’d bested in SRS during the regular season, its postseason per-game scoring margin was about 6 points worse than what it would have been if the team had played to expectations. 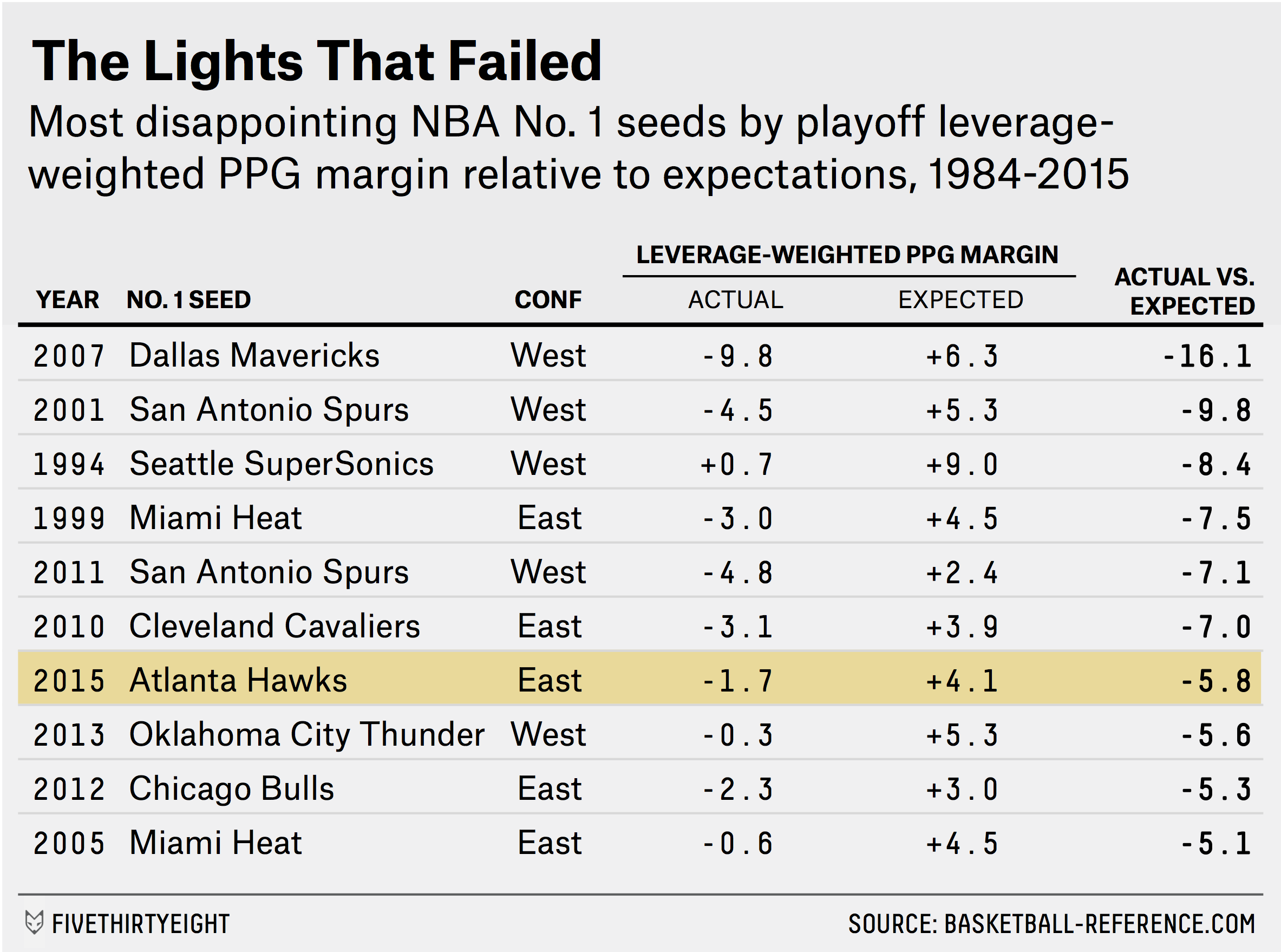 So by that standard, it’s tough to see Atlanta’s 2014-15 campaign as anything but a missed opportunity. Yet it’s also clear that the Hawks wildly exceeded expectations to make it as far as they did.

Going into the season, a projection system that employed Statistical Plus/Minus would have expected Atlanta’s scoring margin to barely break even — and that’s even if the projections knew exactly which players the Hawks would use and how much they’d use them. In fact, their projection was third-worst among No. 1 seeds since 1984. But Atlanta also beat expectations by the seventh-largest margin of any team in that group.

A team with a preseason projection like that of the Hawks usually goes on to produce about 77 dynasty points. So in a way, Atlanta’s 250 tally was far greater than what should have been expected of the team. Among teams that didn’t go to the NBA Finals, Atlanta’s 173-point victory over expectations in terms of dynasty points was the eighth-most of any team since 1984.

From the perspective of the entire season, then, the Hawks enjoyed a successful campaign in 2014-15, even if it did end on a sour note. 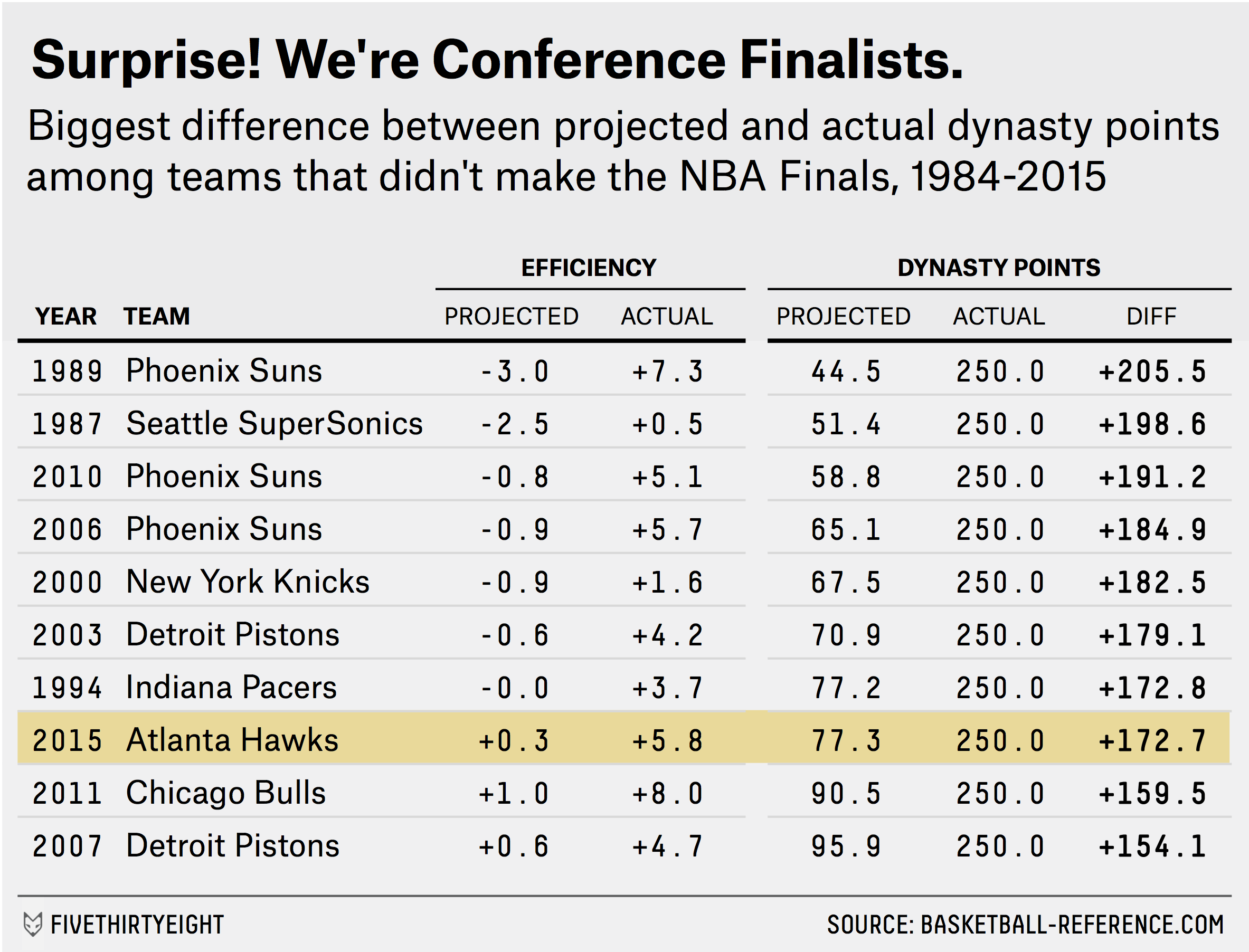 Of course, you might also expect for teams that exceed expectations by such a degree to show a greater tendency to regress toward the mean in subsequent seasons, which would be bad news for the Hawks. And, sure enough, if you had to predict a team’s efficiency differential next season using only its observed differential from this season and its projected differential from before the season, you’d use about two parts observed and one part projected to get the best prediction.

But, luckily for Atlanta, the projection effect above is mostly about regressing to any mean. So if you could make your predictions using the NBA average differential of zero in addition to the aforementioned observed and predicted differentials, you would mix together two parts observed differential and one part league average, effectively giving no weight at all to a team’s preseason prediction.

In other words, the Hawks will likely regress to the mean next season, just like any team that had a successful year. But there’s no evidence that they’ll regress more than other teams because of their humble preseason beginnings. And that should provide at least some solace to Atlanta fans as they hope for another playoff run next season.