Before the 2015 season started last week, the Boston Red Sox were projected by both Fangraphs and Baseball Prospectus to win nearly 90 games this season, with the best expected record in the American League East according to each method.

At a glance, that wasn’t incredibly notable. After all, Boston had won 90 or more games in 11 of the 17 seasons leading up to 2015. But the Red Sox are coming off a 91-loss, last-place season that ranked as one of the worst in franchise history. Since Major League Baseball expanded its schedule to 162 games in 1962, only 18 teams have transitioned from 90 losses in one season to 90 wins the next.

Statistical projections haven’t been much of a guide to which Red Sox team will show up. In 2012, Baseball Prospectus projected the Red Sox to win 89 games; instead, they won 69. And remember 2013, that year they put up 97 wins? They were only projected to win 85. Then, in 2014, they were projected to win 88 games but in reality won 71. (This year, BP projected 88 wins, for whatever that’s worth.) To hear the projections tell it, little has changed about Boston’s talent over the past four years, despite the wild swings in wins and losses.

It’s not just a case of misfortune in the injury department, either, or a case of the “wrong” players otherwise playing. Even if we somehow knew ahead of time exactly which Red Sox players would play (and how much) before the season, a statistical projection would still have been wrong about the team’s records by an average of about 13 wins per season since 2012.

To measure just how much Boston’s individual performances varied from what could have been projected even if future playing time was known, I reconstructed Phil Birnbaum’s seminal study (pdf) about player and team luck, this time using a Marcel-style projection of a player’s WAR runs above average.2

The basic gist is this: A player’s batting, baserunning,3 fielding and pitching runs were projected as rate statistics for each season based on his age4 and a weighted average of his performances over the previous three seasons. Those rates were then applied to his actual playing time during the season in question, to get the number of runs above average he’d have been expected to provide if you knew beforehand how much he’d play. The sum of a team’s individual projections could be construed as its talent, then, in the sense of how much production it theoretically had to work with on its roster.

For the Red Sox, their hitters undershot expectations by a total of 140 runs at the plate in the team’s down 2012 and 2014 seasons, with 197 more runs of disappointment coming from Boston’s pitching staff. Conversely, the team was 88 runs better at the plate and 25 runs better on the mound than projected during the team’s championship-winning 2013 campaign. All told, these projections say there were about 85 wins of talent on both the 2012 and 2013 Red Sox — despite the two teams’ vastly different results — and 81 wins of talent on last year’s 71-win Boston squad. 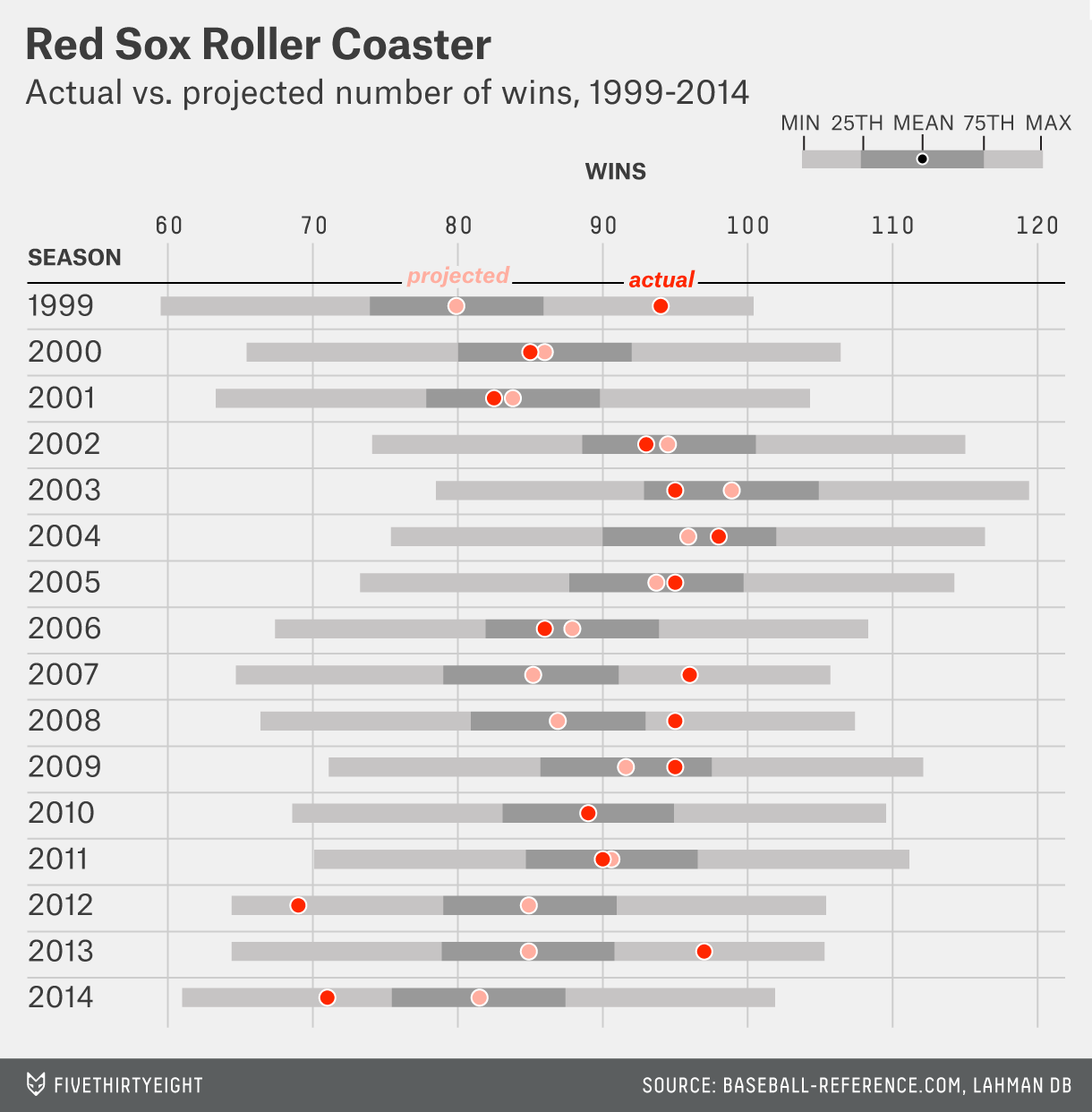 What could be driving these differences?5 It might be tempting to point to managerial influences (the 2012 Red Sox were infamously managed by the much-maligned Bobby Valentine), but very few managers in baseball history have shown any persistent ability to exceed these types of expectations. The uneasy answer might instead simply be luck, the same reason we have to regress teams’ records heavily toward the mean to better estimate their true talent.

Most great teams combine luck with skill. According to the method outlined above, the typical World Series winner since 1962 possessed about 88 wins of talent but posted an actual win total of 96 on average. Conversely, few teams with poor records are ever quite as bad as the loss column suggests. The 2012 and 2014 Red Sox are particular outliers in this regard, but even the average team to win between 69 and 71 games in a season since 1962 had 77 wins of talent on its roster.

What does that mean for this year’s Red Sox, then? They’ve started the season 6-3, which is good for first place in the AL East, but that doesn’t mean much fewer than two weeks into the season. Perhaps more telling is that most teams who undershoot their talent projections by a wide margin tend to improve a lot the following season.6 Also, a team’s preseason talent projection from the year before tells you more about how it’ll do this season than its actual record from the previous season itself.7 Between regression to the mean, superior projections and a fast start, the Red Sox are currently on pace for 89.7 wins, according to Fangraphs’ playoff odds simulations.

So to the extent that you can say anything for sure about the Red Sox these days, they’re tracking for another good season in 2015. And if it holds up, it would continue the franchise’s ongoing roller-coaster ride in the standings, completing the most extreme up-and-down-and-up-and-down-and-up-again stretch in modern MLB history.