Three days ago, the Chicago Blackhawks were staring down a 3-1 deficit against the mighty Los Angeles Kings and the prospect of an end to their quest for back-to-back Stanley Cups (and a third title in five years). Two tenacious wins later, though, and Chicago’s odds are looking much better. They face a Game 7 at home Sunday night for the right to be favored against the New York Rangers in the Cup Final.

If they prevail, are the Blackhawks an NHL dynasty? Early in the Western Conference finals, no less an authority than the Great One, Wayne Gretzky, said we can start using the “d-word” if Chicago wins it all this year.

Defining a dynasty is difficult, and ultimately arbitrary, but we can measure just how successful Chicago has been since the NHL rebooted after the 2005 lockout.

To quantify a franchise’s success, I’ll turn to a method I used for the NBA in this article from January 2013. In it, I adapted a simple system first devised by Basketball-Reference.com founder Justin Kubatko, which rewards teams for increasing their championship probability by winning playoff series.

In the current NHL, every team starts with 3.3 initial points, or 100 times one-thirtieth (there are 30 NHL teams, so at the beginning of the season every team has a 1-in-30 chance of winning the Stanley Cup). By qualifying for the postseason, a team has increased its chances from 1-in-30 (3.3 percent) to 1-in-16 (6.25 percent), so it gets a 2.9-point bonus just for making the playoffs.

From there, teams accrue points for winning series and advancing further into the playoffs. Win a first-round series? Get a bonus of 6.3 points. Advance to the conference finals? Tack on 12.5 more points. Make it to the Stanley Cup Final? Grab 25 points. And win the cup? That’s a 50-point prize. (This means the Stanley Cup champion gets exactly 100 points for its playoff run.)

The advantage of this system is that it’s relatively simple and is directly tied to the number of teams in the league, as well as the amount of competition a team has left behind by advancing through each stage of the season.

By this accounting method, the Blackhawks have racked up a league-best 300 dynasty points since the 2005-06 season: 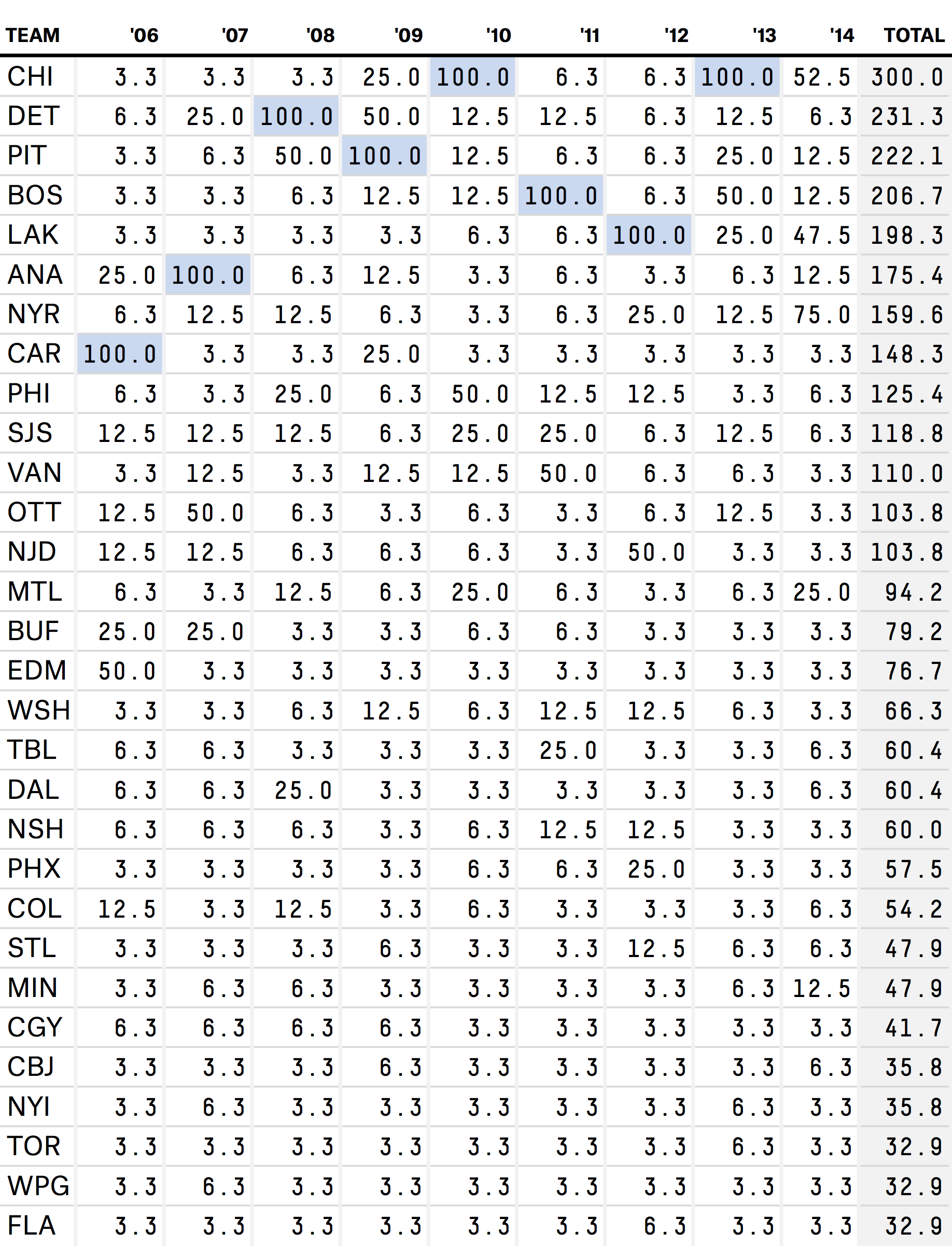 (To put the still-in-progress seasons of Chicago, Los Angeles and New York on the same scale as completed seasons, I weighted their potential point totals by the likelihood of each occurring, assuming that the Blackhawks have a 55 percent chance of winning Game 7 — because they have home-ice advantage — and that the Rangers have a 50-50 shot at beating either in the final.)

The Blackhawks are a safe No. 1 — the best the Kings could do would be to pull within 40.4 points of them if LA wins Game 7 and goes on to hoist Lord Stanley’s Mug. Dynasty or not, Chicago has established itself as the class of the NHL.