With Phil Jackson returning to the NBA as president of the New York Knicks — his first front-office job — there’s one move he can make to greatly improve the Knicks’ chances at success: Hire himself as coach.

I’m not saying that the Knicks’ players are a perfect match for Jackson’s “triangle” offense, or that I have any insight into his coaching shortlist — except that any name on that list other than his will be less likely to win championships.

To illustrate, let’s take a quick look at some of Jackson’s accomplishments: 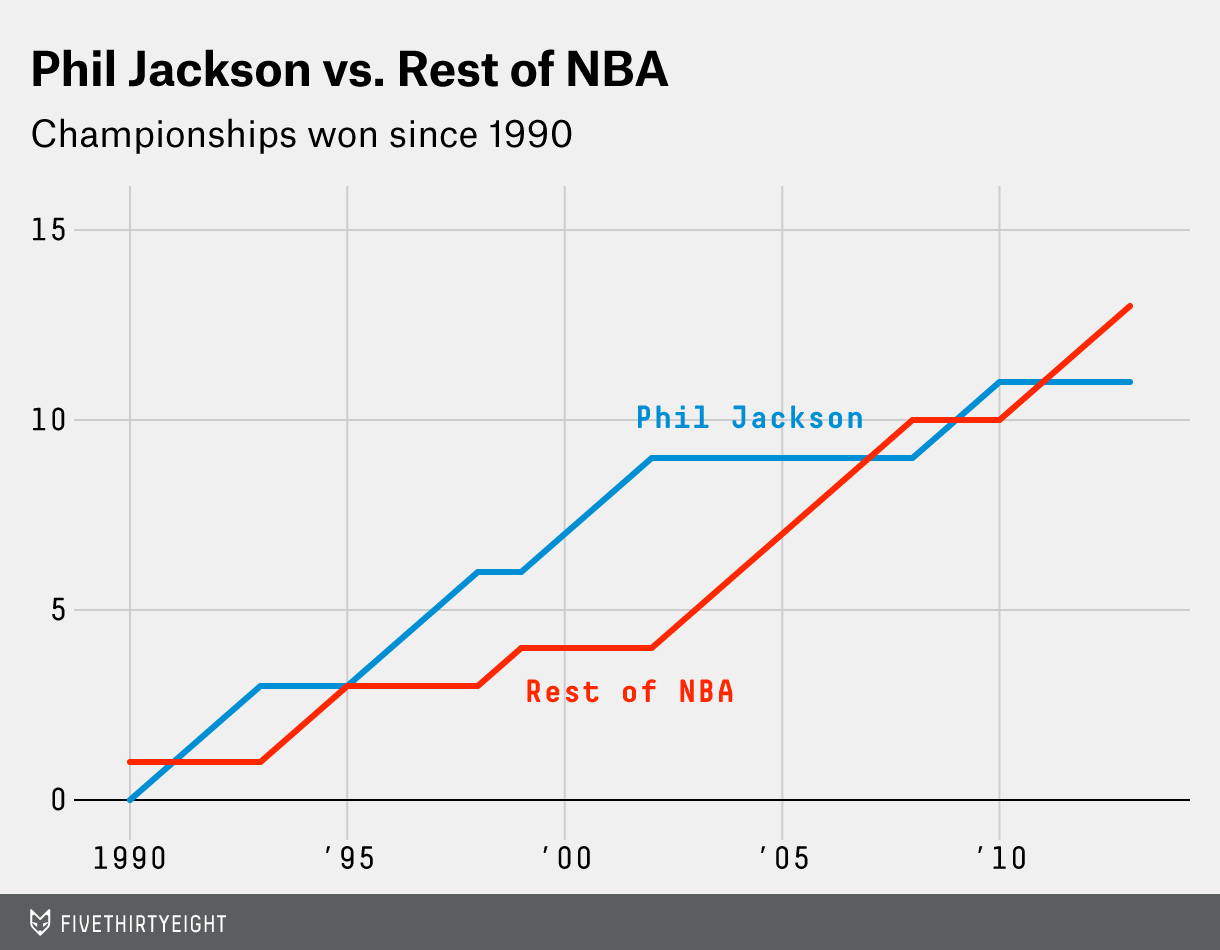 I know “count the rings” is a controversial argument, but Jackson has won a lot of championships. This graph also doubles as a good reason why he should return to coaching: He’s fallen behind the rest of the NBA. Time to catch up!

Though already a Hall of Famer and widely regarded as one of the best coaches in NBA history, Jackson still sometimes gets criticized for having won his 11 rings exclusively with some of the best players in history: First Michael Jordan and Scottie Pippen (and later Dennis Rodman) with the Chicago Bulls, then Kobe Bryant and Shaquille O’Neal (and later Pau Gasol) with the Los Angeles Lakers.

Of course, if he had taken over last year’s Lakers squad — with Kobe, Gasol, Dwight Howard and Steve Nash — and trounced everyone on his way to a 12th trophy, he would have faced the same criticism. It’s ridiculous: Take any player who Jackson won a championship with, and he has won at least five more without them. The reverse isn’t even close. Among Jackson’s regular starters, Rodman had two championships without him, and Shaq had one. That’s it.

But the point that Jackson’s teams were all very strong, while mostly true, misses a critical point: They won more championships than even incredibly strong teams are expected to.

But maybe his top teams are just better than the rest of the NBA’s top teams. So let’s look at the next step down: Jackson’s teams won between two-thirds and three-fourths of their games in the regular season 10 times, winning five championships (50 percent). The rest of the NBA has done the same just 10 of 108 times (9.3 percent).

None of Jackson’s four teams who failed to win two-thirds of their games ever won a championship. But of the 765 other teams in that category, only three ever did. To summarize:

One reason Jackson’s consistently great teams may have done so well relative to their records is that their records more accurately reflect their strength, more so than the random NBA team that runs well for a year or so. But Jackson’s dynastic teams do even better in the playoffs than other dynasties.

For example, the average Phil Jackson team saw its win-rate drop by about 4 percent in the playoffs (against much stronger competition) compared with the regular season (against average competition). The league dropped, on average, by 11 percent. Gregg Popovich is notorious for resting starters and otherwise not taking the regular season seriously, and even his San Antonio Spurs see a 9.5 percent drop. To find any dynasty nearly as consistent as Jackson’s, you have to go back to the 1980s. Pat Riley’s Lakers’ win rate dropped only 5 percent (though if you add in Riley’s years with the Knicks and the Miami Heat, his average jumps back to 10 percent).

Even if Jackson had nothing to do with his teams’ strength in general, his ability to keep them performing their best or even better in the playoffs is remarkable. Given the extreme rarity of clutch-like effects in sports, is it more likely that two to three different teams independently possessed this quality, and Jackson just happened to coach them? Or did Jackson’s coaching instill this quality?