Stop the presses! Last Sunday, the Packers’ Aaron Rodgers threw two interceptions, his first in Green Bay since December 2012. Granted, they were completely inconsequential, and at least the first was pretty much a freak accident — his pass deflected off a linebacker — but Rodgers accepted at least some of the blame for them all the same. Despite the embarrassment, his touchdown-to-interception ratio remains the stuff of legend. Now in his eighth year as a starter, he has 66 interceptions for his career, along with 262 touchdowns (counting the playoffs). Normally, I’m not impressed by such stats. As I wrote last year (and have defended on numerous occasions), I think that his incredibly low interception rate is in part the result of a potentially costly unwillingness to gamble — particularly in situations where his team is down multiple scores late. I haven’t changed my mind.

But I don’t think this quirk of Rodgers substantially diminishes his value. Or put another way, he is so valuable to begin with that even if he’s slightly too risk-averse, it’s largely irrelevant. Of course, Rogers is still relatively young (he’ll turn 32 in December), and he hasn’t had to deal with the ups and downs of a full career yet, either. But he’s a huge outlier, even for a quarterback at this stage of his career. For example, here is how he has accumulated touchdowns relative to interceptions game by game for his career, compared to every QB in NFL regular-season history since 1960: 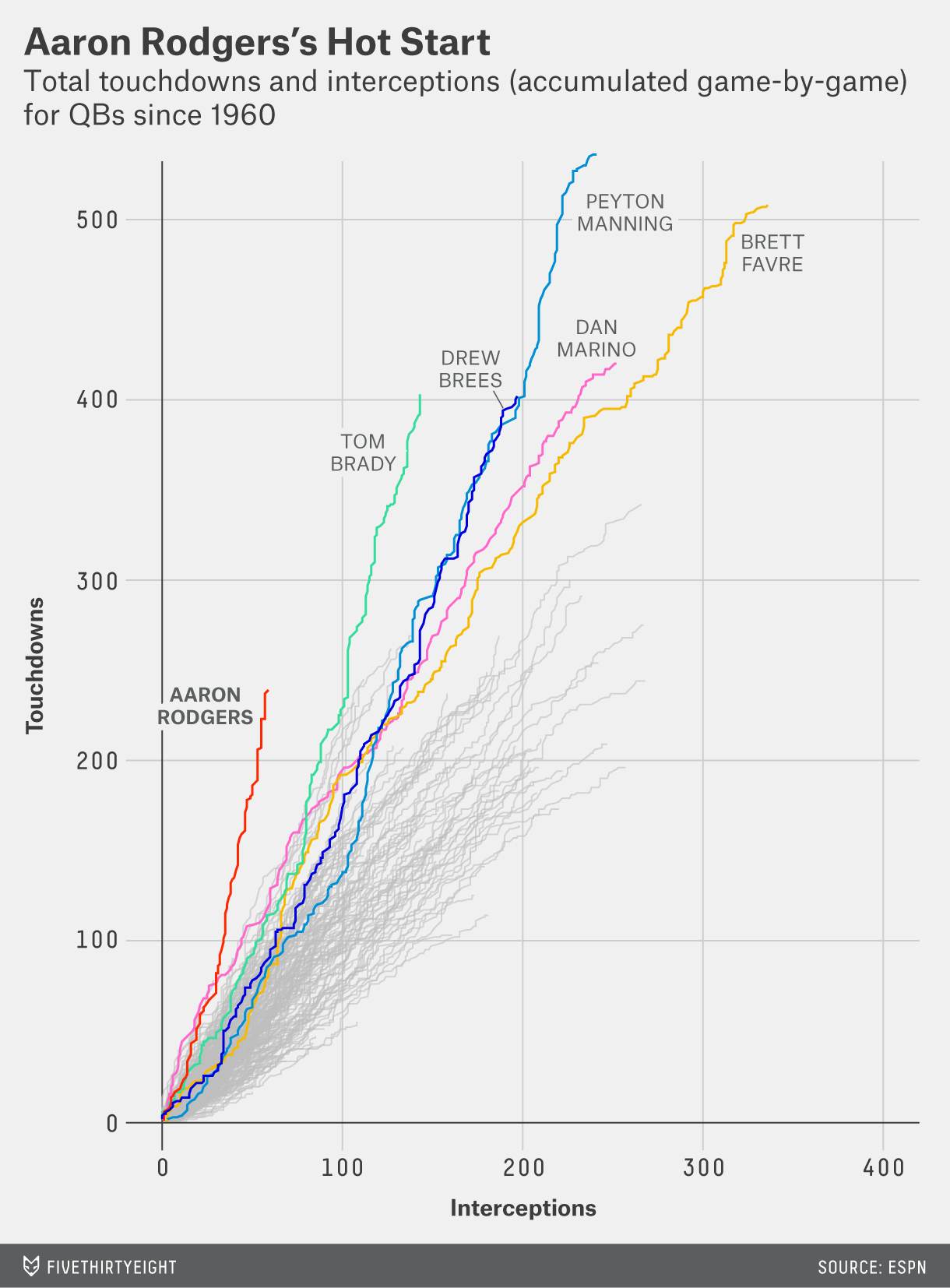 For most quarterbacks, losing causes interceptions just as much as interceptions cause losing. Rodgers is no different; he’d be even more valuable if he made certain win-maximizing adjustments (even though they might hurt his statistics a bit). But the steepness of Rodgers’s rise has no parallel. Criticizing him for it is a bit like criticizing Bill Belichick for not going for it enough on fourth down, or criticizing Lionel Messi for playing tiki-taka football so much instead of trading as many possessions as possible with his opponents. That is, they’re still pretty much the best at what they do, but could possibly be doing a little bit better.

There’s one more reason to give Rodgers the benefit of any (skeptical) doubt. Which brings us to our …

Chart(s) of the Week

Naturally, a quarterback’s ability to win games is affected by his team’s running game, defense, special teams, coaching and everything else. Even his broader statistical portfolio is largely a team accomplishment, and untangling everyone’s contributions can be nearly impossible. But one indicator of the strength of a quarterback’s teammates is money paid on their salaries. Some teams spend lavishly to surround their quarterbacks with high-powered offensive teammates.1 The Packers, not so much:

Rodgers is second only to Andy Dalton of the Bengals in Points Above Replacement.2 Yet the Packers have spent the fifth-smallest amount on offensive non-quarterbacks for the 2015 season. Part of this is because the Packers are fiscally responsible and aren’t spending much in general on payroll. But they also specifically rank near the bottom consistently in spending on the guys who play with their quarterback. Here’s how the Packers’ offensive spending over the past three seasons (including this one) stacks up to the rest of the league:

The NFL salary cap alone explains some of this chart. Teams spending more on QBs often end up spending less on other offensive players, simply because they have to spend less money somewhere. But it’s striking to me just how much a lot of teams with big-name, big-money QBs lean on them. For example, the Packers, Steelers and Giants all spent less money than average on offense despite having three of the top QB salaries in the business. In general, many of the top QBs in the game probably deserve even more esteem than the considerable amount they receive already. For instance, Eli Manning should get a bit more of a break sometimes, as he receives literally the least financial support for his offensive teammates in the league.

Rodgers, despite his team spending barely more money on offensive teammates than the Giants have for Eli Manning, has put up much better numbers. He has 73 TDs and 15 interceptions (counting the playoffs) since 2013, compared with 58 and 43, respectively, for Manning. What could Rodgers have done with another $60 million worth of offensive linemen?

As usual, tweet me questions @skepticalsports and there’s a chance I’ll answer them, even if they seem a bit silly. Like this one:

@No_Little_Plans Rob, maybe 538 can help. In NFL when road team gets ball to start 2nd half, do they score more since fans not in seats yet?

OK, silly, but interesting. The precise mechanism of NFL home-field advantage is still an open question. The conventional wisdom is that it has something to do with atmosphere, for example how crowd noise affects signal-calling. I can see how these kinds of effects might reach a nadir immediately after the half. But using ESPN’s play-by-play data, I tried filtering for drives by away teams that start immediately after the half, and found that they averaged a similar number of points as other drives.3 But for the margins we’re dealing with, that sample size is way too small to be meaningful.4 So I fished around a bit and found that, broadly speaking, the third quarter is better for road teams than average.5

Now, contra the conventional wisdom, many — though not all — statistically minded NFL analysts think home advantage is more likely to relate to officiating. So with that in mind, I looked a bit more carefully at penalties in particular. Penalties tend to favor the team on offense, but they favor the offense even more often when it’s the home team. The margins here also don’t look huge, but it’s pretty clear over more than 400,000 offensive plays: For every 100 plays a home offense runs, it normally nets about three (expected) points from all penalties called. The equivalent rate for away offenses is just more than two expected points per 100 plays. That difference adds up to about a point per game: not a large fraction of your typical scoreline, but a pretty big chunk of the total home-field advantage that we tend to see (generally around two to three points per game).

But here’s the interesting bit: The home team’s advantage from penalties isn’t divided equally by quarter. Nor is it strongest in the fourth quarter, when calls are most crucial, as in basketball. The home team’s largest advantages are in the first and second quarters, with the smallest coming in the third quarter: 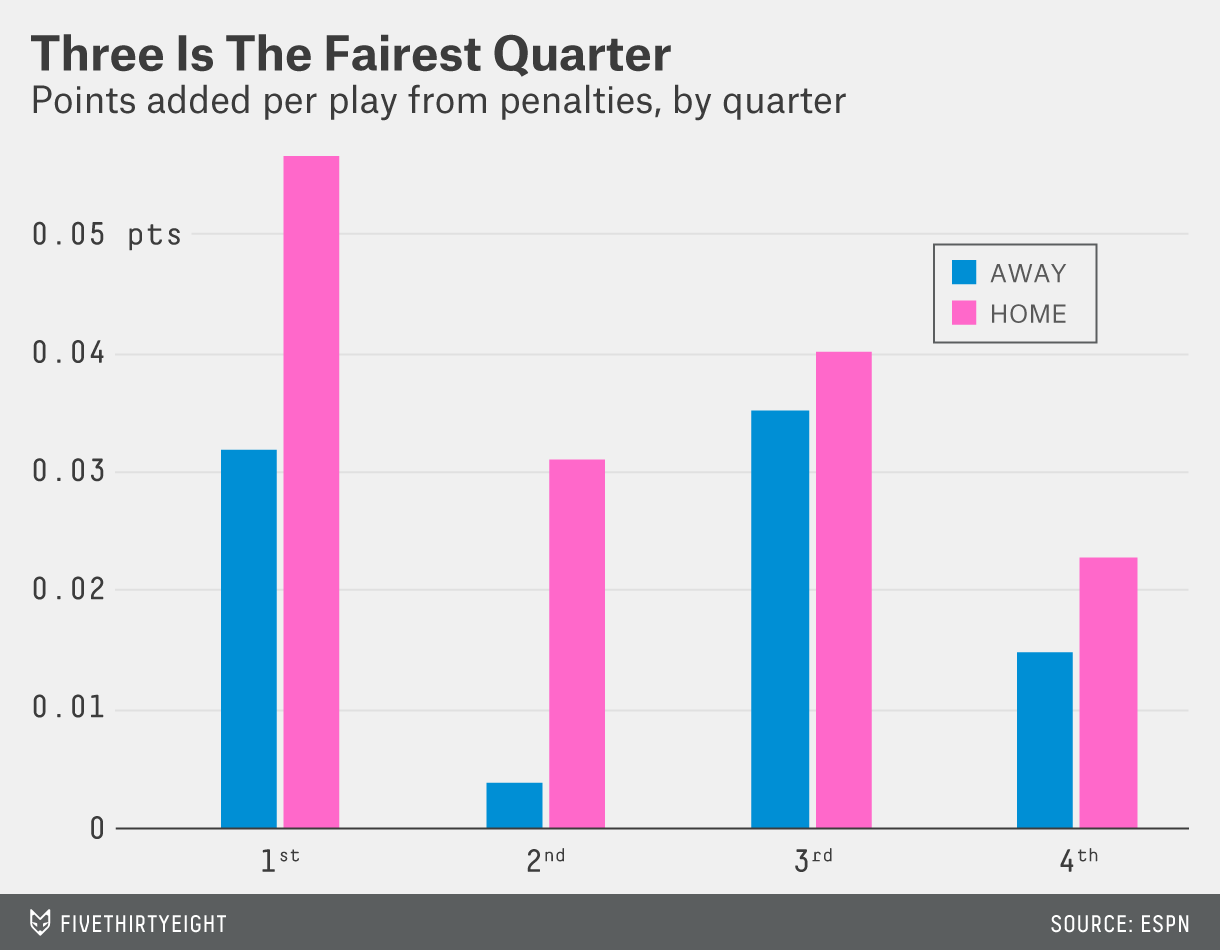 I really don’t have any explanation for this, and at this point I would categorize my speculation as “wild.” For instance: Perhaps the second half is when refs start trying very hard not to give in to their unconscious bias toward the home team.

Most empirically significant game of this week

There are many great and potentially revealing matchups set for this weekend, including the Panthers at the Seahawks. A lot of rookie quarterback theory hinges on the fate of Cam Newton — whose rookie campaign bore the hallmark (namely lots and lots of production) of a potential all-time great, but who has had only one winning season in his first four years.

But Carolina-Seattle gets only an honorable mention, because the matchup of the week is clearly the Patriots at the Colts. Since the AFC championship game thrashing by the Pats (known for a certain controversy), these two teams — and their two star quarterbacks — have been on very different trajectories. The Patriots obviously did this little thing called winning the Super Bowl, and have started this season on a tear reminiscent of their 16-0 campaign in 2007. Andrew Luck, meanwhile, has been outplayed by 40-year-old backup Matt Hasselbeck — the oldest non-kicker in football this year. 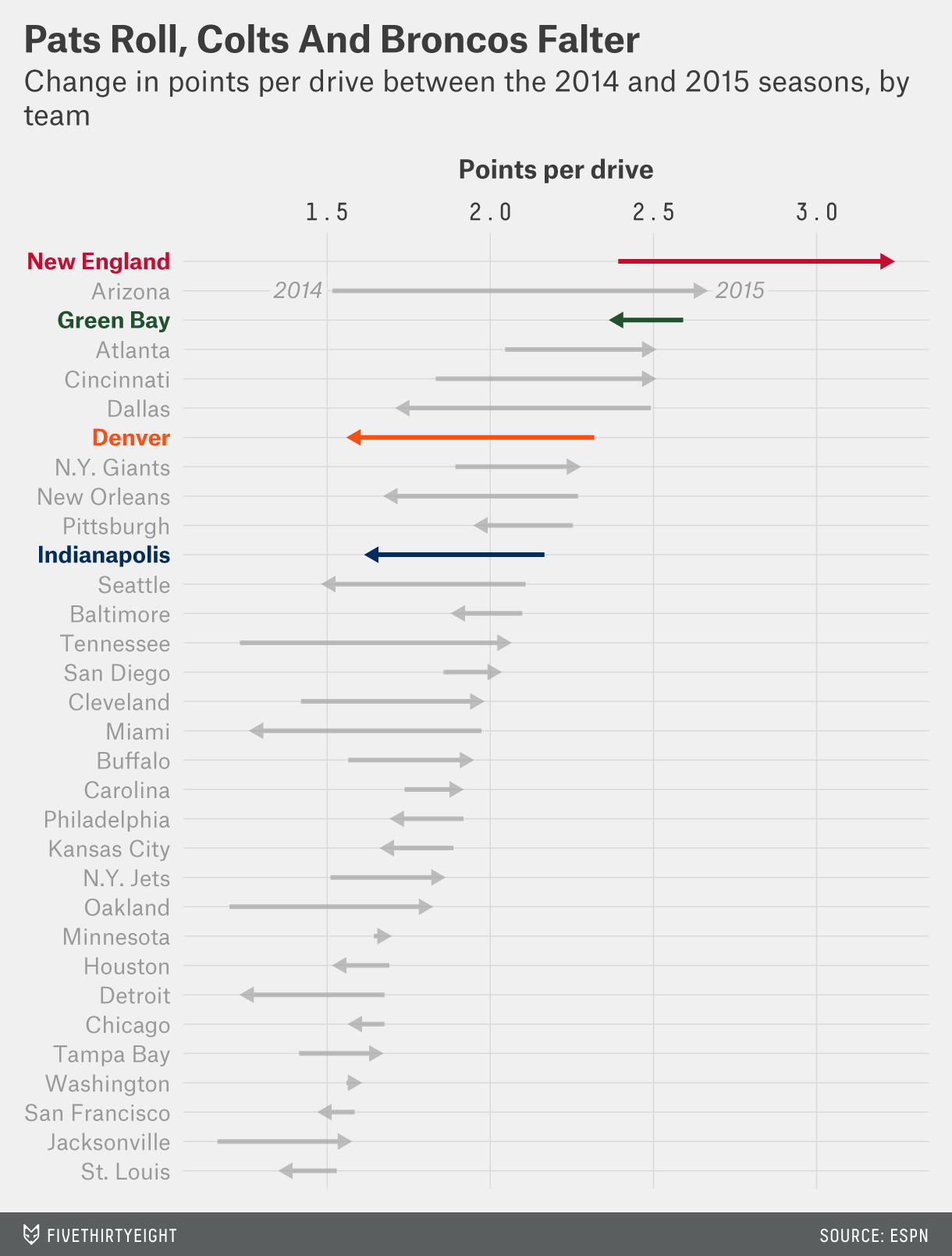 Rodgers essentially has maintained his MVP form, while Peyton Manning seems finally to be in real decline. But the Colts and Luck, their 26-year-old quarterback, have underperformed by nearly as much as the Broncos have with 39-year-old Peyton Manning at QB.

Luck, who is practically the patron saint of Skeptical Football, is expected to return. Given the result the last time these two teams met, the Patriots are expected to romp. Whether that happens or not, we should learn more about the strengths and weaknesses of some of the most important figures and phenomena in the sport today.