Sunday morning brought a bonanza of new Senate polls. Marist College, on behalf of NBC News, released new surveys in Kansas, Iowa and North Carolina. YouGov released its latest round of polling in every Senate race in conjunction with CBS News and The New York Times.

But the polling had almost no impact on the bottom line: Republicans remain slight favorites to win the Senate in the FiveThirtyEight forecast. Their chances are 59.4 percent according to our model, not meaningfully changed from 58.5 percent as of our previous update on Friday.

Why so little change? Neither YouGov nor Marist has had much “house effect” this cycle, meaning that their results have usually tended to match the FiveThirtyEight forecast to begin with. YouGov also re-interviewed many respondents from previous waves of its Senate polling, a technique that tends to produce less change than the traditional method of contacting an entirely new batch of respondents.

YouGov and Marist did have a substantial disagreement in Kansas: Marist showed the independent candidate, Greg Orman, 10 points ahead of the Republican incumbent, Pat Roberts, while YouGov had a tied race. YouGov’s poll is the first to show anything other than a lead for Orman since the Democrat, Chad Taylor, dropped out of the race in early September. Still, it was counterbalanced by Orman’s strong result in the Marist poll.

The outcome in Kansas remains uncertain because of the unusual dynamics of the race and because the polling differs so much from the state’s Republican-leaning “fundamentals,” but our model now has Orman as a 65 percent favorite, his highest figure to date.

In Iowa, Marist had a two-point lead for the Republican, Joni Ernst, while YouGov had the Democrat, Bruce Braley, up by a percentage point instead. Iowa leans slightly toward Ernst, who is about a 60 percent favorite in the FiveThirtyEight model. But the consensus of surveys suggests that the race hasn’t gotten away from Braley as much as last week’s Des Moines Register poll might have implied.

One of Democrats’ better results in the new batch of polling was in Colorado, where the YouGov poll had Mark Udall three points ahead — reversing a string of polls that had the Republican, Cory Gardner, in the lead. However, as we described on Friday, the polls that showed an advantage for Gardner had been a somewhat Republican-leaning bunch. In contrast to Iowa, where it would be worth betting on Ernst if you could do so at even odds, Colorado is close to being a true tossup.

The least favorable results for Democrats were the YouGov numbers in Alaska, Arkansas and Louisiana, all of which had Republican challengers ahead of the Democratic incumbents by margins of about 5 percentage points. Democrats Mary Landrieu of Louisiana and Mark Begich of Alaska each saw their chances decline to about 25 percent from 30 percent with the new polls added.

It would be a mistake to dismiss the importance of these states. If Republicans become more certain to win them, they’ll have a clear path toward picking up six Democrat-held Senate seats, as the races in Montana, South Dakota and West Virginia look like near-certain gains for the GOP. Republicans would then need to win just one of Iowa, Colorado or Kansas to take control of the Senate (or they’d need to convince Orman to caucus with them if Roberts loses). With only 30 days to go until the election, any polling confirming Republican leads in these states qualifies as bad news for Democrats.

But as we’ve said repeatedly, it’s not yet time for Democrats to panic. Republicans retain the clearer path to a majority, but the race is competitive — and the outlook hasn’t changed much. 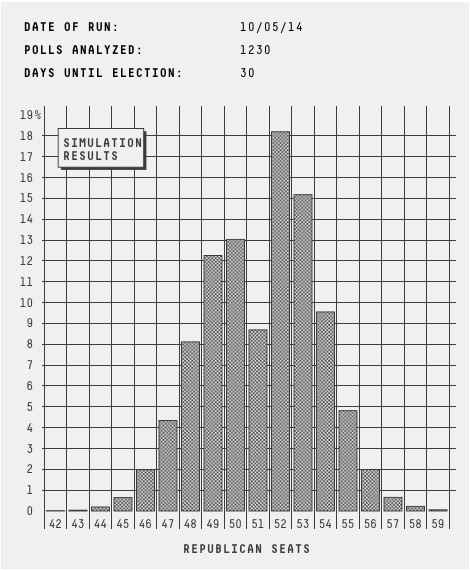