The battle for Senate control has been close all year, but also remarkably consistent. Way back in March, we described Republicans as slight favorites to pick up the chamber. And since FiveThirtyEight officially launched its forecast model this month, Republicans have had between a 53 and a 65 percent chance of winning the Senate. Our most recent update, as of Thursday evening, is close to the middle of that range, putting Republicans’ takeover chances at about 58 percent.

There’s no guarantee things will remain this way. At just about this time two years ago, Democrats broke open what had been a stalemate in the battle for Senate control. The FiveThirtyEight forecast had the race almost even at the beginning of September 2012, but had Democrats as an 80 percent favorite by the end of that month.

This year, however, has been characterized by what Charlie Cook calls “head fakes.” Just 10 days ago, Democrats had been benefiting from a string of good polls in Colorado. Since then, the Democratic incumbent in Colorado, Sen. Mark Udall, has seen his situation worsen, with the past five polls showing a lead for Republican Cory Gardner instead.

The chart below tracks polls of Colorado’s Senate race since June 1. It lists both the margin as originally provided in the poll, and the margin the FiveThirtyEight model uses after the various adjustments it applies. A few of the earlier polls were of registered voters, rather than likely voters, so the model adjusts those toward the Republican, Gardner. On the other hand, some of the more recent polls have had a Republican-leaning “house effect,” so the model adjusts those toward Udall. 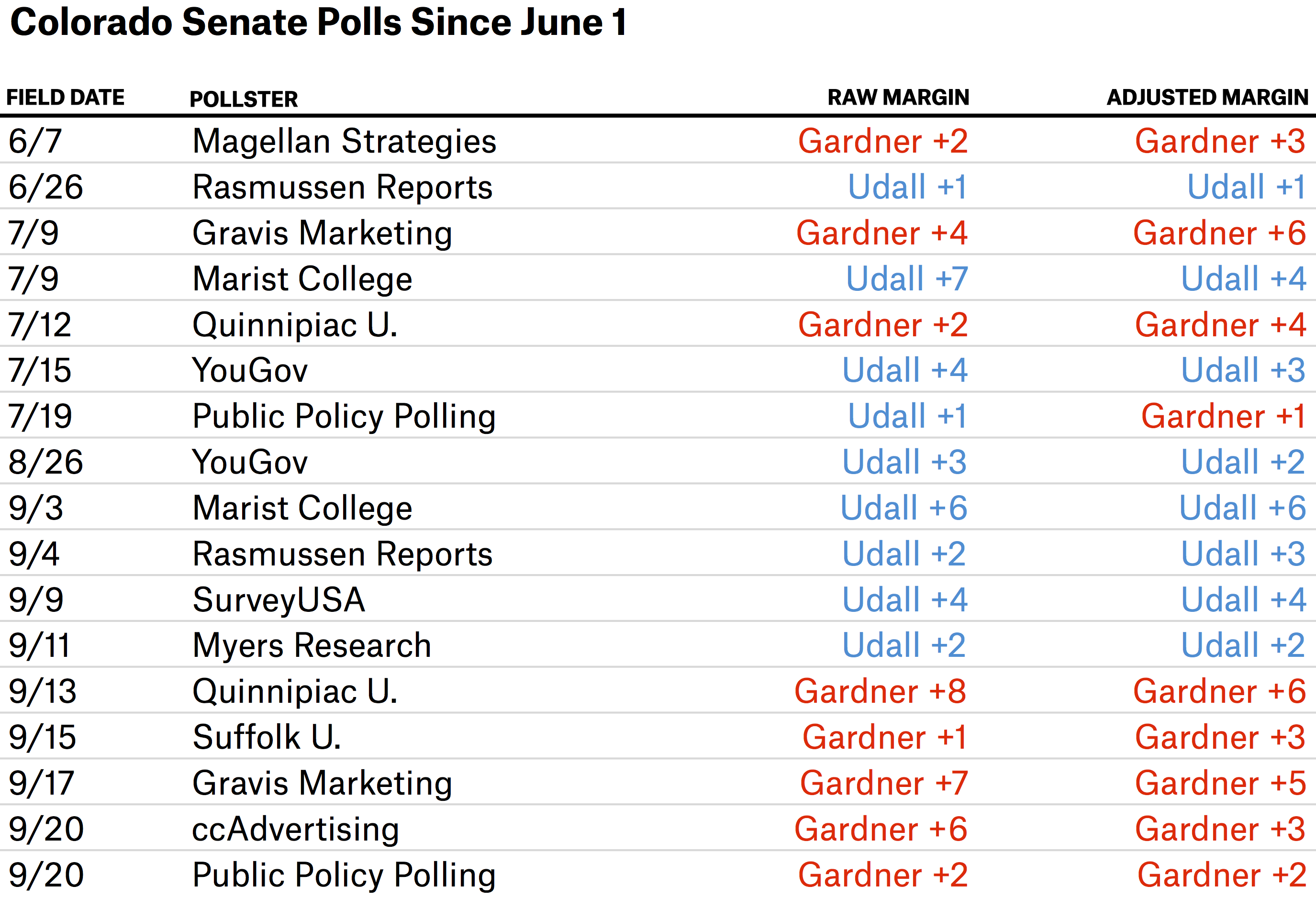 Even with these adjustments, the trend isn’t favorable for Udall. All five polls between Aug. 26 and Sept. 11 had him ahead. All five since have shown him behind.

Could this just be a coincidence? Absolutely. If you’re tracking dozens of races for months at a time, you’re going to find a few weird patterns like these — and sometimes they’re just statistical noise. The FiveThirtyEight forecast still sees the race as very close. Gardner is only a 56 percent favorite, in part because the model places a fair amount of weight on the earlier polls.

In this case, however, there’s a credible hypothesis to explain the trend toward Gardner. Whereas a few weeks ago, Udall had a heavy advertising advantage in Colorado, more recent ad placements have been almost even, according to data from Echelon Insights, a Republican analytics and consulting firm. Advertising blasts can sometimes produce temporary bounces in the polls; perhaps Udall had one a few weeks ago.

The troublesome implication for Udall is that race may slightly favor Gardner when ad spending is even.

The silver lining for Udall is that perhaps he’ll be able to regain an advertising advantage when it matters most, in the closing days of the campaign. As of June 30, Udall had $5.7 million in cash on hand compared to Gardner’s $3.4 million, according to the Federal Election Commission.

But those figures are somewhat out of date; the FEC will release new ones next month. Which candidate raised more money in the third fiscal quarter? Which one had a higher burn rate? Which one will be helped more by outside groups? Which one is doing a better job of buying the right ad placements?

These aren’t sexy questions, but they’re important for understanding the movement in the polls — and they may determine who controls the Senate next year.