Over the long run, Republicans and Democrats each win elections about half the time. This is not only a strong historical tendency1, but also one well predicted by political theory. A party that continually loses elections because it’s too far removed from the political center or because it appeals to too narrow a range of voters should seek to remedy that by expanding its coalition or moving toward the median voter — perhaps by compromising some of its ideological goals.

Sometimes the transition can be rough. The Republican Party, for example, is currently engaged in a battle between its more moderate and more conservative forces. It’s not clear the conflict between the Republican establishment and the so-called tea party is over. Nonetheless, parties usually become more moderate before long. In presidential elections, they’ve tended to nominate successively more moderate candidates the longer they’ve been out of the White House. Democrats, for instance, chose Bill Clinton in 1992 after losing with more liberal nominees in 1984 and 1988. And Republicans nominated more moderate candidates in Senate races this year than they did in 2010 or 2012.

But that the parties tend toward electoral parity doesn’t mean their coalitions are mirror images of each other. For a long time in American politics, Republicans have represented those voters who are in the majority (or plurality) demographically. A voter who is white, straight, suburban, Christian, middle-aged and middle income is quite likely to be a Republican. However, a voter who deviates from that profile in some respect — for instance, by being black, Hispanic, gay, Jewish, an atheist, young or by having completed an education beyond an undergraduate degree — is likely to be a Democrat. The majority of Americans deviates from that profile in at least one of those respects. That’s part of why a larger share of Americans have long identified as Democrats rather than Republicans.

Why would the GOP accept such an arrangement and take the smaller coalition? Doesn’t it defy the median voter theorem that I described before?

One reason may be that a less diverse coalition is easier to manage; Republican voters generally have more in common with one another than Democratic voters do. A straight, single Latina mother living close to the poverty line in El Paso, Texas, is very likely to be a Democrat. So is a white, wealthy, PhD recipient with a same-sex partner in Madison, Wisconsin. But the straight Latina voter and the gay white voter may have few interests in common.

The other consolation to the GOP is that the Americans affiliated with the Republican Party are more likely to turn out to vote, especially in midterm elections. Whites turn out at greater rates than racial minorities; older Americans at greater rates than younger ones; wealthier ones at greater rates than poorer ones. To editorialize for a minute, I think voting ought to be made easier — you ought to be able to vote in a box, with a fox, in your house with the click of a mouse, or in any other way that damn well pleases you. But in the status quo, demographic groups differ in their ease of access to voting and their overall level of political engagement — and those Americans who tend to have easier access and higher levels of engagement are more likely to vote Republican.

That was a long windup, so here’s the pitch: Polls of so-called likely voters are almost always more favorable to Republicans than those that survey the broader sample of all registered voters or all American adults. Likely voter polls also tend to provide more reliable predictions of election results, especially in midterm years. Whereas polls of all registered voters or all adults usually overstate the performance of Democratic candidates, polls of likely voters have had almost no long-term bias.2

And history is on our side. I compared likely voter polls conducted during the final three weeks of Senate campaigns since 1990 against the actual results in each state.3 I looked for evidence of statistical bias in these polls — for example, a poll that put the Republican ahead by 2 percentage points in Arizona when the Republican won by 9 points. That poll would have had a 7-point Democratic bias. The table below reflects the average statistical bias of likely voter Senate polls in each election since 1990, broken down between midterm and presidential years. 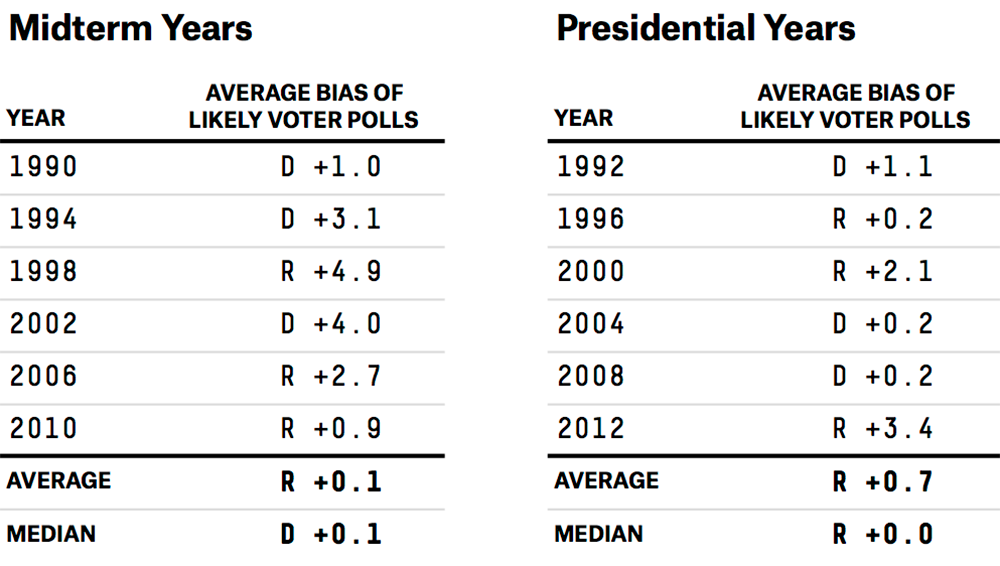 As the table shows, the bias has varied quite a lot from year to year. In 1998, the average likely voter poll overstated the performance of the Republican candidate by almost 5 percentage points. But there was an opposite and nearly equal bias in the next midterm in 2002, when the polls overstated the performance of Democrats by about 4 points. (To drop a bomb in the #nerdwar, results like these ought to make one very skeptical of models that implicitly or explicitly assume the error in polls is uncorrelated from state to state or from survey to survey. At least as often when the polls miss they miss in the same direction; that contributes to the uncertainty of the forecast and makes an “unexpectedly” good showing by one party or the other more likely.)

But while likely voter polls may show a bias toward one party in any given election, they’ve been fair over the long run. In the average midterm year since 1990, Senate likely voter polls have had a bias of 0.1 percentage points toward the Republican candidate — that is to say, virtually no bias. In presidential years, they’ve had a 0.7-point GOP bias. That’s very small compared with the overall error in Senate polls and probably reflects statistical noise rather than anything systemic.

However, we can come up with a reasonable proxy for registered voter surveys by comparing the partisan affiliation of voters in each year’s national exit poll against the affiliation of a larger sample of American adults. In particular, for years before 2010, I’ve compared the party affiliation numbers in the exit poll against those among all adults in polls conducted by the Pew Research Center, Gallup and CBS News/The New York Times.

This evidence suggests that the turnout gap almost always favors Republicans. In 2008, for instance, Democrats had a 7-point partisan ID advantage in the national exit poll. That’s impressive, but it’s smaller than the 9- or 10-point advantage Democrats had throughout the year in polls of all adults. Overall, since 1990, there has been a 2.7 percentage-point turnout gap favoring Republicans in midterm years, and a 1.9-point gap favoring them in presidential election years, we estimate. 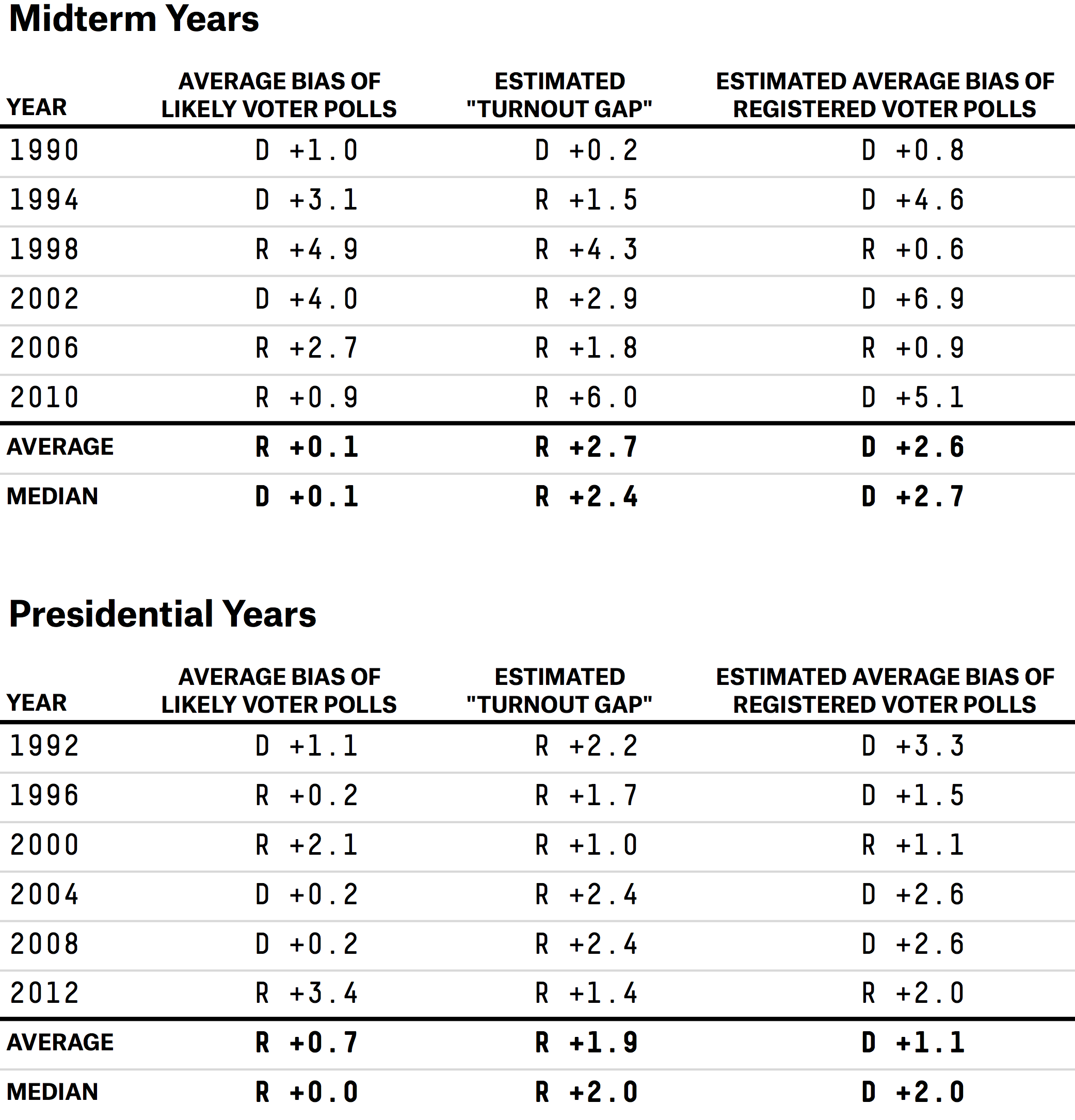 We estimate that on average in midterm years since 1990, registered voter polls have had a 2.6 percentage-point Democratic bias — compared against likely voter polls, which have been unbiased.

That’s why our model adjusts registered voter polls in the way it does; their Democratic bias is fairly predictable, especially in midterm years.

CORRECTION (Sept. 11, 1:28 p.m.): A previous version of this article referred incorrectly to a poll conducted by ABC News and The Washington Post. The poll was released on Tuesday, and while the Post sometimes labels one of the survey’s subsamples as “likely voters,” ABC News does not.