When we officially launched our forecast model two weeks ago, it had Republicans with a 64 percent chance of taking over the Senate after this fall’s elections. Now Republican chances are about 55 percent instead. We’ve never quite settled on the semantics of when to call an election a “tossup.” A sports bettor or poker player would grimace and probably take a 55-45 edge. But this Senate race is pretty darned close.

What’s happened? The chart below lists the change in our forecast in each state between Sept. 3 (when our model launched) and our current (Sept. 15) update. 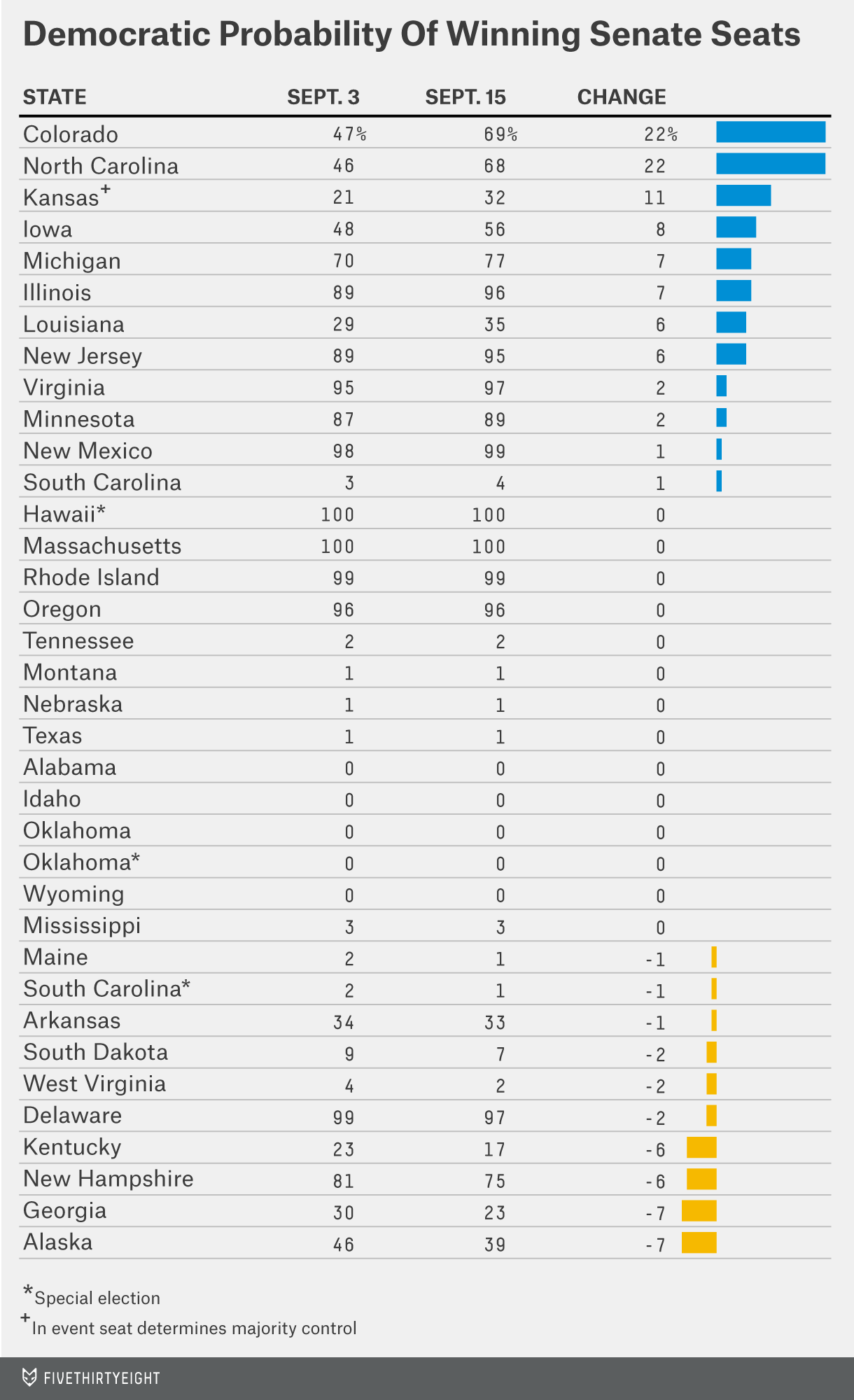 As you can see, there hasn’t been an across-the-board shift. Republicans’ odds have improved in several important races since the launch of our model. Democrats’ odds have improved in several others. But the two states with the largest shifts have been Colorado and North Carolina — in both cases, the movement has been in Democrats’ direction. That accounts for most of the difference in the forecast.

It might help to break the states down into several groups:

Most of the Democrats’ gains, however, have come from the purple states. What’s perplexing is that this has happened right as Democrats’ position on the generic congressional ballot — probably the best indicator of the national mood — has deteriorated. Historically, the generic ballot and state-by-state Senate polls — while not perfectly correlated — have moved in tandem more often than not. On average since 1990, a one-percentage-point change in the generic ballot has translated to a half-point change (in the same party’s direction) in the average Senate race.

Might Democrats be benefiting from strong voter outreach in these states — perhaps the residue of President Obama’s “ground game” in 2012? You could make that case in North Carolina, where two polls released on Monday showed a smaller gap between registered and likely voters than most other states that have been polled this year. But this story isn’t so consistent. By contrast, CNN’s poll of New Hampshire on Monday had a conspicuously large turnout gap. And in 2010, presidential swing states showed an especially large turnout drop-off for Democrats.

These totals do not account for outside spending. But in stark contrast to 2010, liberal and Democratic “super PACs” have spent slightly more money so far than conservative and Republican ones, according to the the Center for Responsive Politics. (One caveat for Democrats is that when money is spent on advertising, it can sometimes have short-lived effects.)

Whatever the reason, the GOP’s path to a Senate majority is less robust than before. They still look pretty good in the “path of least resistance” states. But while West Virginia, Montana and South Dakota are extremely likely pickups, Alaska, Arkansas and Louisiana are not sure things. Meanwhile, Republicans have fewer top-tier backup options, as states like North Carolina and Colorado have trended away from them. Republicans may need to decide whether to consolidate their resources. It won’t help them if they lose each of Colorado, Iowa, New Hampshire and North Carolina by a couple of percentage points — and in the process blow a state like Arkansas.