Many post-mortems of the 2012 presidential campaign suggest that Mitt Romney erred by allowing President Obama to “define” him early through an advertising blitz in battleground states. Certainly Mr. Obama’s advisers have trumpeted the success of this strategy. A few weeks after the election, a Bloomberg News article about an appearance by the Obama campaign strategist David Axelrod said:

…Obama’s campaign made a strategic decision to spend more heavily from May through August, with the belief that campaign ads become less effective closer to elections. “By September, people are disregarding ads,” he said. “They back-loaded. We front-loaded.”

And just last week, in a lengthy inventory by The Boston Globe of the Romney campaign’s regrets, a Romney adviser, Beth Myers, seemed to validate the Obama campaign’s move:

“I wish I had expressed my deep concern more vociferously at that point; this was May, June, when they really went on the offense,” Ms. Myers said. “I remember thinking, ‘This bothers me.’ ’’

The problem, however, is that there is very little evidence that these early ads mattered much, according to research I have done along with Lynn Vavreck, a political scientist at the University of California, Los Angeles, for an upcoming book, The Gamble.

Some of that evidence comes from political science research into other campaigns, including presidential races. As I noted here over a year ago, this research finds that political ads have short-lived effects. If during one week a candidate broadcasts significantly more advertisements than the opponent, that candidate may see a boost in the polls, but the effect of that advertising will be mostly gone within a few days. Political ads are a bit like morphine: you need dose after dose for them to keeping working.

In the 2012 campaign, what is most striking about the polls during the spring and summer months is how stable they were. Consider the trend in candidate favorability in YouGov polling, for example: 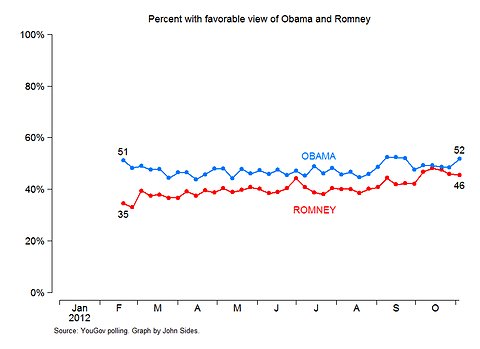 During the campaign, Ms. Vavreck and I worked with YouGov to gather and analyze polling data about the race. The trend above resembles the trend in favorability across all of the public polling. Views of Mr. Romney hardly moved in May or June, which is when the Obama advertising surge occurred. If they did move, it was in the opposite direction than one might expect, since Mr. Romney’s favorability actually notched up briefly in late June.

Of course, the trends might be sharper if we distinguished the battleground states, where the ads were actually being broadcast, from other states. But the trends in May and June don’t suggest Mr. Obama gained very much over Mr. Romney. Here is the trend in Mr. Romney’s favorability in YouGov’s national polling, broken down by these two groups of states: 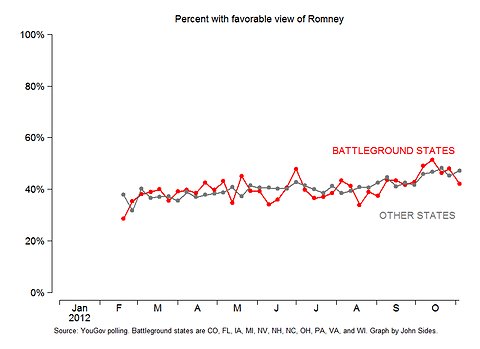 There are some bumps and wiggles in the battleground states, but nothing that suggests Obama’s advertising took a serious toll.

Perhaps we need to drill down to assessments of Mr. Romney’s specific qualities. These early Obama ads often emphasized Mr. Romney’s time at Bain Capital in an effort to portray him, in Haley Barbour’s piquant phrase, as “a wealthy plutocrat married to a known equestrian.”

Ms. Vavreck and I tracked several qualities relevant to this message, with arguably the most relevant being whether Mr. Romney “cares about people like me.” Here is the trend in that indicator throughout the campaign. 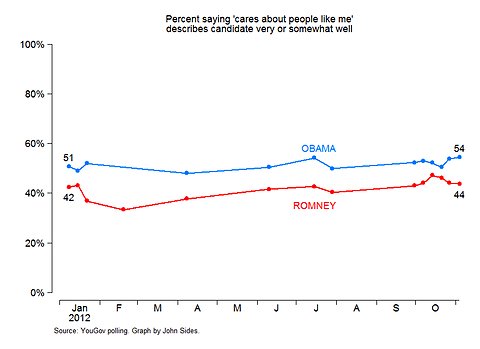 What this graph shows is fairly remarkable, given this narrative about the Obama campaign “defining” Mr. Romney. Obama’s advantage on this indicator — an advantage Democratic presidential candidates have traditionally had — was in place in January 2012 and never shifted much during the entire campaign. When Ms. Vavreck and I looked more closely at the trend in battleground states, we saw little notable movement in the spring and summer.

So perhaps “front-loading” the ads, as Mr. Axelrod described it on Politico.com, wasn’t as effective as many believe. In fact, the polls throughout this time period resemble this description:

Interestingly, that description was also provided by Mr. Axelrod.

To be sure, my claim is not that campaign advertising in the 2012 presidential election did not matter at all. As I noted earlier, an advertising advantage — if it is substantial enough and close to the election — can sway votes. So it would be folly for a candidate to unilaterally disarm and run no ads whatsoever. Moreover, this initial analysis cannot speak to other kinds of counterfactuals, including ones that the Romney camp is still pondering like, “What if we had run more positive ads?”

But the political science research and this initial evidence from 2012 suggests that the Obama campaign’s blitz of early advertising did little apparent damage to Mr. Romney in the minds of voters.