If you read my Skeptical Football column regularly last season (which I’m sure you did), you may already be familiar with my “gunslinger” obsession. But in case you’re new, here’s the quick recap: For a quarterback to maximize his ability to win, he has to take risks. Just as a coach failing to go for it in certain fourth-down situations costs his teams wins, so does a quarterback who doesn’t alter his game to exploit the situation he faces. Many times this means making decisions that can be costly to a player’s statistical efficiency — and often his popular reputation — in order to slightly improve his team’s chances of victory. In other words, throwing interceptions may not always be bad, and not throwing interceptions may not always be good.

To celebrate the QBs willing to make this bargain, last year I picked a Gunslinger of the Week (the QB who set the best example of taking “good, smart risks in their relentless pursuit of victory, whether or not those risks succeeded”) each week. This season, we’re spinning that off into its own post, to be released on Mondays. (MNFers are eligible to steal the next week’s award, but only if they’re really really slingy.) So without further ado:

Philip Rivers and defending Gunslinger of the Year Tony Romo both won despite trailing big and throwing multiple interceptions while they were behind. Those impossible wins are rare feats that I love to reward.

But when I looked over the play-by-play, I was less impressed from the gunslinger perspective. Romo’s first interception came with less than a minute left in the first half, on Dallas’s own 20-yard line, and was thrown only 1 yard downfield on a first-and-10. “Good” interceptions are low risk/high reward — or sometimes high risk/high reward — but a bad short pass on first down in Romo’s own territory is high risk/low reward. His second came on a throw that went 2 yards downfield on third and 6, again in Dallas territory. Suffice to say, these were not the kind of plays that signify that a QB is pulling out all the stops to win; they were just good, old-fashioned turnovers.

Rivers had two interceptions in the first half, including one returned for a touchdown and one on the Lions goal line. While he eventually pulled out an amazing win, gunslinging had little if anything to do with it. The Lions’ Matthew Stafford — a Gunslinger Award veteran himself — got a little too slingy for his own good and threw two INTs while in the lead to help the Chargers get back into things, and then Rivers sealed the deal with an impressively robotic but decidedly non-slingy stretch of 20 straight completions, only four of which went for more than 5 yards in the air (and eight of which were thrown behind the line of scrimmage).

Note: Gambling by throwing downfield isn’t the only way to be a good gunslinger, but it’s certainly one way. Which leads us to this week’s winner:

This week 11 quarterbacks faced extended multiple-score deficits,1 and none pushed the ball downfield as hard as Steelers QB Roethlisberger: 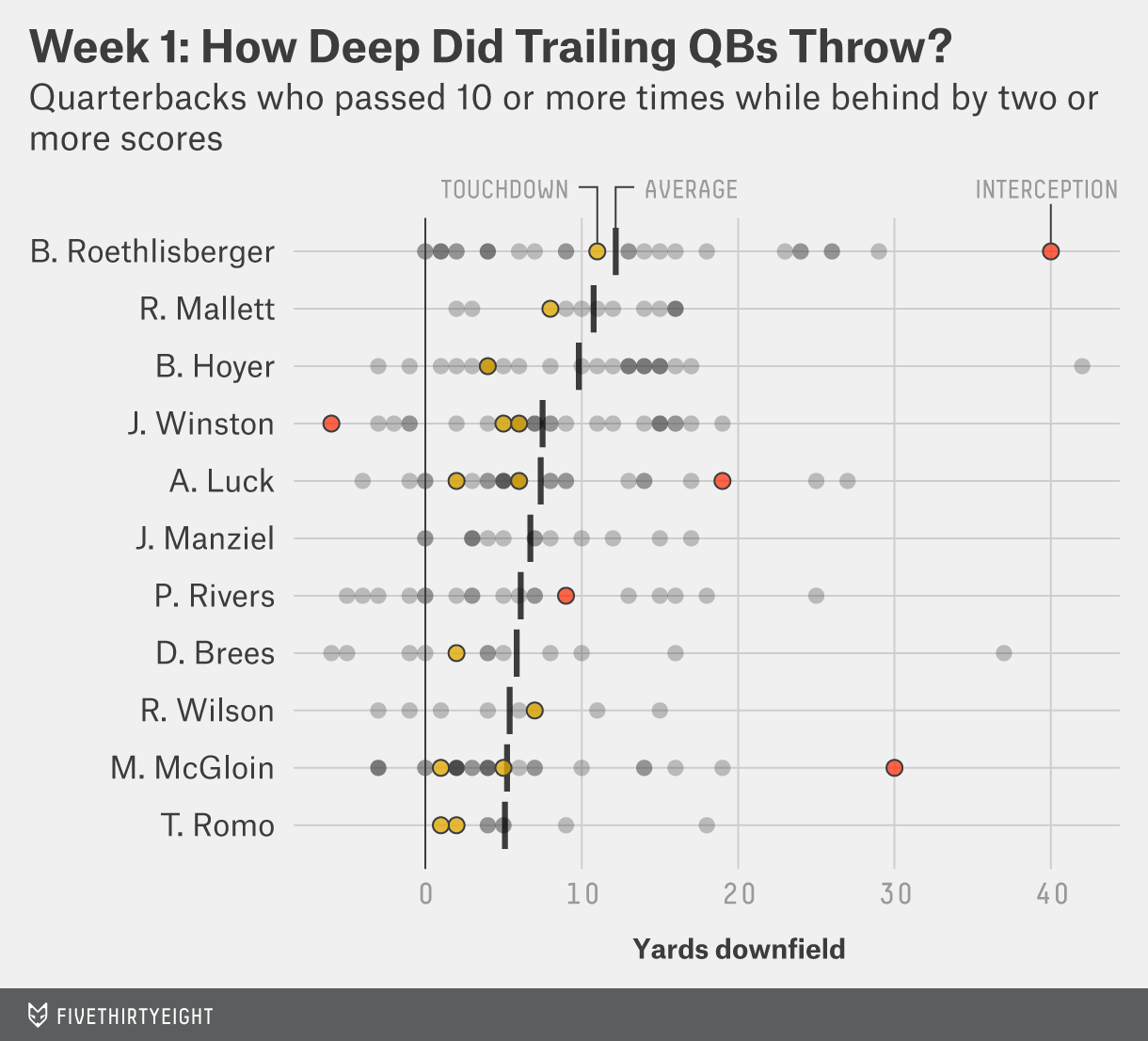 Playing the Patriots, Roethlisberger threw his passes the farthest downfield by far: on average, more than 12 yards per pass. That included seven attempts of more than 20 yards — more than the rest of these quarterbacks combined.

After New England raced out to a 21-3 lead early in the third quarter, things looked pretty bleak for the Steelers. But Roethlisberger brought them to within 7 with a TD (plus 2-point conversion) and a field goal on the next two drives — each featuring passes completed 24 yards downfield. When the Patriots went back up 14, Roethlisberger continued to push, completing an 18-yard pass to get the Steelers to midfield and then going big with a 40-yard pass that was intercepted by Duron Harmon. There’s no shame in being intercepted on a throw that — if completed — would have set up a potentially crucial score with seven minutes remaining.

On the final drive of the night, Roethlisberger would push his yard tally to 351 and get a meaningless TD with seven seconds left. But with two minutes left on that same drive — when he probably could have given up and padded his stats a little more easily — he was throwing a 29-yard bomb to Markus Wheaton that a defender got a hand on. Had that been successful, it might have given the Steelers a slim chance of winning instead of none. That’s the kind of choice I like to see.

Reminder: If you tweet NFL questions to me @skepticalsports, there is a non-zero chance that I’ll answer them in Skeptical Football.