It reads like a dream résumé for a Republican presidential candidate: nine-term congressman, six-year Fox News host and now twice-elected governor of a crucial swing state. His record puts him snugly in the mainstream of the Republican Party. Oh, and he won re-election as governor in 2014 by 31 percentage points.

And yet, Ohio Gov. John Kasich, who officially kicks off his campaign today, is currently in 12th place in national primary polls with a net favorability rating of just +3 percentage points, according to the latest Monmouth University survey. Kasich’s problem: Voters who have an opinion about him — Kasich isn’t well-known — don’t view him as a mainstream conservative. So far, they consider him 2016’s version of Jon Huntsman.

Kasich, like Huntsman, is adored by the media, is seen as too moderate by GOP voters and appears to enjoy telling Republicans they’re wrong. As Kyle Kondik first pointed out in Politico, Huntsman entered the 2012 race with great press but went on to kill his campaign, in part by tweeting stuff like: “To be clear, I believe in evolution and trust scientists on global warming. Call me crazy.” Huntsman won no primaries and dropped out of the race after the New Hampshire primary, where the only party affiliation he won was self-identified Democrats.

Kasich’s record is actually considerably more conservative than Huntsman’s. For one thing, he isn’t in favor of same-sex marriage. When we look at our aggregate ideological ratings, which combine Kasich’s congressional voting record, the ideology of his donors and the left-right lean of his public statements, Kasich is about as moderate as Jeb Bush, John McCain and Mitt Romney. Huntsman, on the other hand, looks a lot more like Chris Christie. 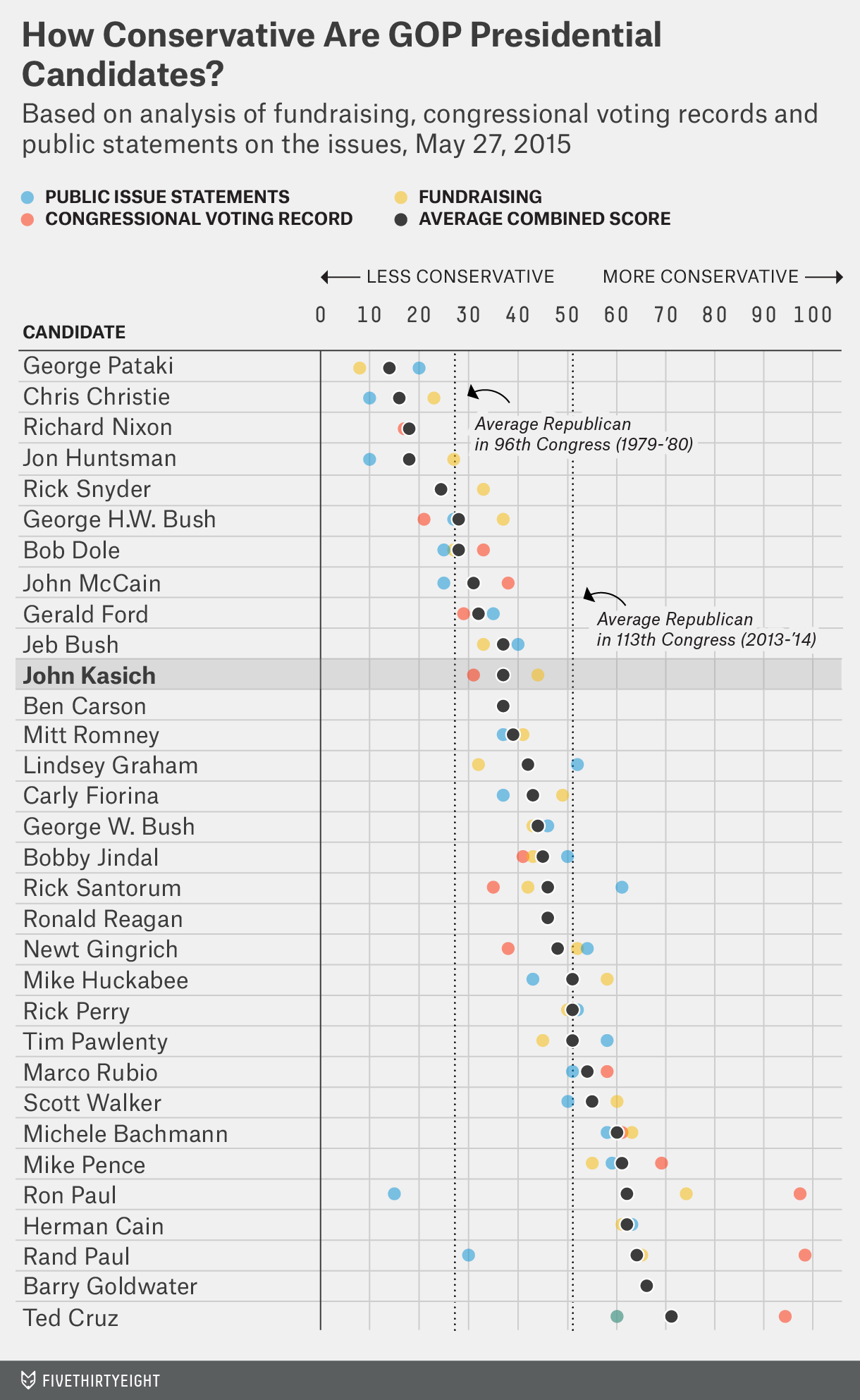 Kasich’s problem is that he sounds a lot like Huntsman. That is, he defends moderate positions — often in a manner that comes off as condescending. Most prominently, he has embraced Medicaid expansion in Ohio. Once challenged on expansion, Kasich yelled, “I don’t know about you, lady, but when I get to the pearly gates, I’m going to have an answer for what I’ve done for the poor.” It isn’t just what Kasich said, but how he said it. As Politico detailed, this type of reaction is fairly typical for Kasich. He likes to yell and to tell people, “You don’t know what you’re talking about.”

But it’s not a good way to win over Republican voters. When all Republican voters hear are moderate answers, they begin to think you’re, well, moderate. In June, YouGov asked voters four times to put candidates on a 0 (liberal) to 100 (conservative) scale. Kasich was rated as more moderate than all the other candidates except for George Pataki. Heck, even Christie was rated as slightly more conservative than Kasich. 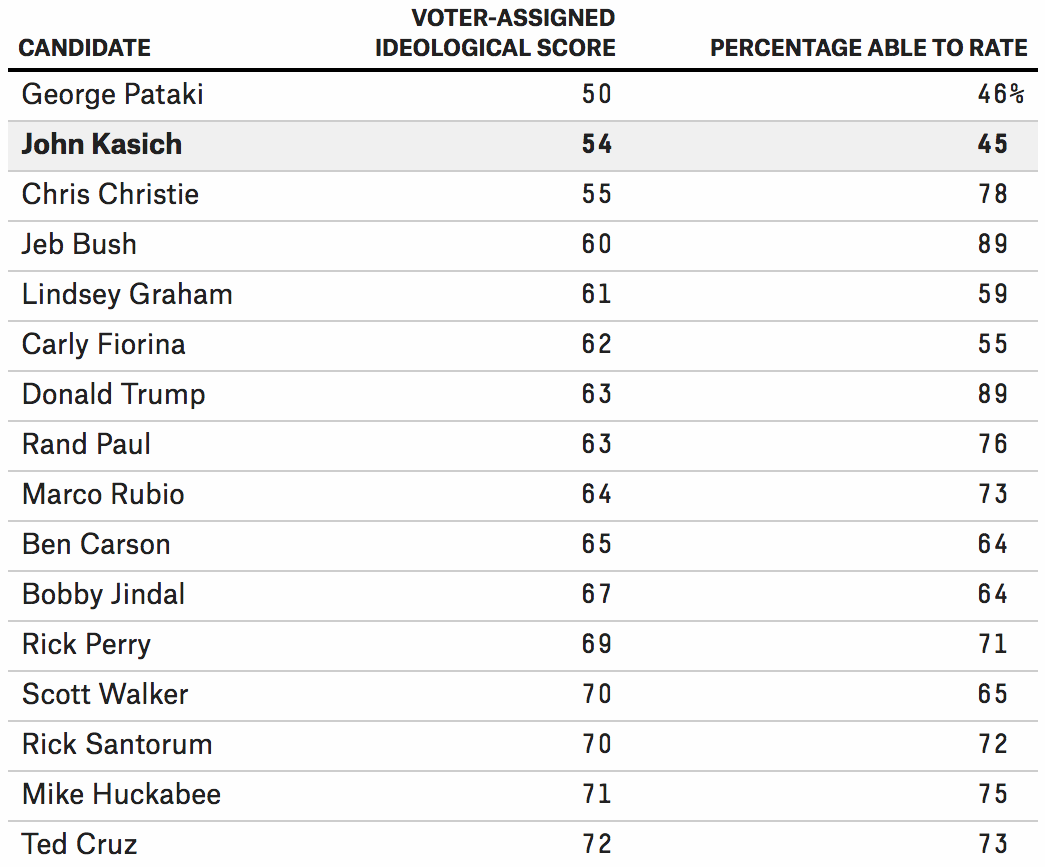 With a score of 54, Kasich was 17 points to the left of the average Republican respondent. Kasich is rated as considerably more moderate than Bush, even though their records are similar. Kasich is also scored as more moderate than McCain or Romney were rated when they sought the Republican nomination, and the GOP base has become more conservative since then. It’s difficult to imagine how anyone seen as this liberal could win the Republican nomination.

The good news for Kasich is that most voters don’t know who he is yet. In the most recent YouGov poll taken in June, fewer people could rate Kasich’s ideology than any other candidate’s (including Pataki’s). About twice as many people could place Bush on the ideological scale. That means Kasich has more room to change voters’ perceptions. Kasich could really benefit from being on the debate stage.

But while Huntsman had the opportunity to debate (and say stuff in Chinese), Kasich may have more trouble. Because so many candidates are running for the GOP nomination, the debate sponsors are using polling to determine who gets an invite and who doesn’t. Right now, Kasich would be on the outside looking in for the first debate, hosted by Fox News, which is taking place in Kasich’s home state, Ohio.

Even if Kasich gets into the debates, it will be difficult to break through in such a crowded field. Moderate Republicans already can choose from Bush, Christie and Pataki, and moderates are, as mentioned, a shrinking part of the Republican Party. There’s no reason for moderates to back Kasich when he’s seen as a much longer shot to win than Bush, despite a similar ideology.

More than that, it’s not entirely clear that Kasich would change his message if given the chance. Key members of Team Huntsman have joined Team Kasich. These include media strategist Fred Davis and consultant John Weaver. As Kondik wrote in Politico, “Weaver is so far from the GOP mainstream that he consulted for a time with the Democratic Congressional Campaign Committee.”

Still, it’s too early to dismiss Kasich. He’s a serious candidate (unlike Donald Trump) whose actual record isn’t too liberal to win a primary and who can make a real case that he’s among the most electable Republican candidates. As my colleague Nate Silver pointed out, Kasich could be the “moderate backstop” if Bush falters. But there are no signs of that happening yet, and Kasich’s campaign so far seems more determined to give voters a moderate Republican who talks down to other Republicans.

Check out how Kasich is doing in the 2016 Endorsement Primary.