By any standard, the New York Knicks’ 2014-15 season — team President Phil Jackson’s first at the helm — has been an unmitigated disaster.

It’s a fact that Jackson himself couldn’t avoid acknowledging in a message he issued to fans (particularly season-ticket holders) this week. “While I know this has been a challenging season for our team on the court, I can also tell you that everyone in the organization is working tirelessly to get our Knicks back to a place where we are once again competing at the highest level,” Jackson said.

In the message, Jackson requested that fans be patient as the team works on its long-term plans. (“I ask that you remain optimistic and hope you will join us on our continued journey as we build a team that once again reflects the spirit of being a New York Knick.”) But what should Jackson’s rebuilding timetable look like? The legendary former coach signed a five-year deal last March. Given the particulars of the 2013-14 Knicks team he inherited (their average age, Simple Rating System scores relative to the league and the Eastern Conference, and the wins above replacement of their top player), how quickly should Knicks fans have expected Jackson to turn things around?

To answer that question, I ran a series of logistic regressions using every non-playoff NBA team since the league expanded to 27 teams in 1989-90, estimating the likelihood of a team like the Knicks eventually returning to the postseason and reaching various SRS milestones within the five years of Jackson’s contract. These probabilities should serve as a rough guideline for how quickly the Knicks should have expected to return to respectability when Jackson came on, and when patience with Jackson should start to wear thin if the Knicks continue to languish. 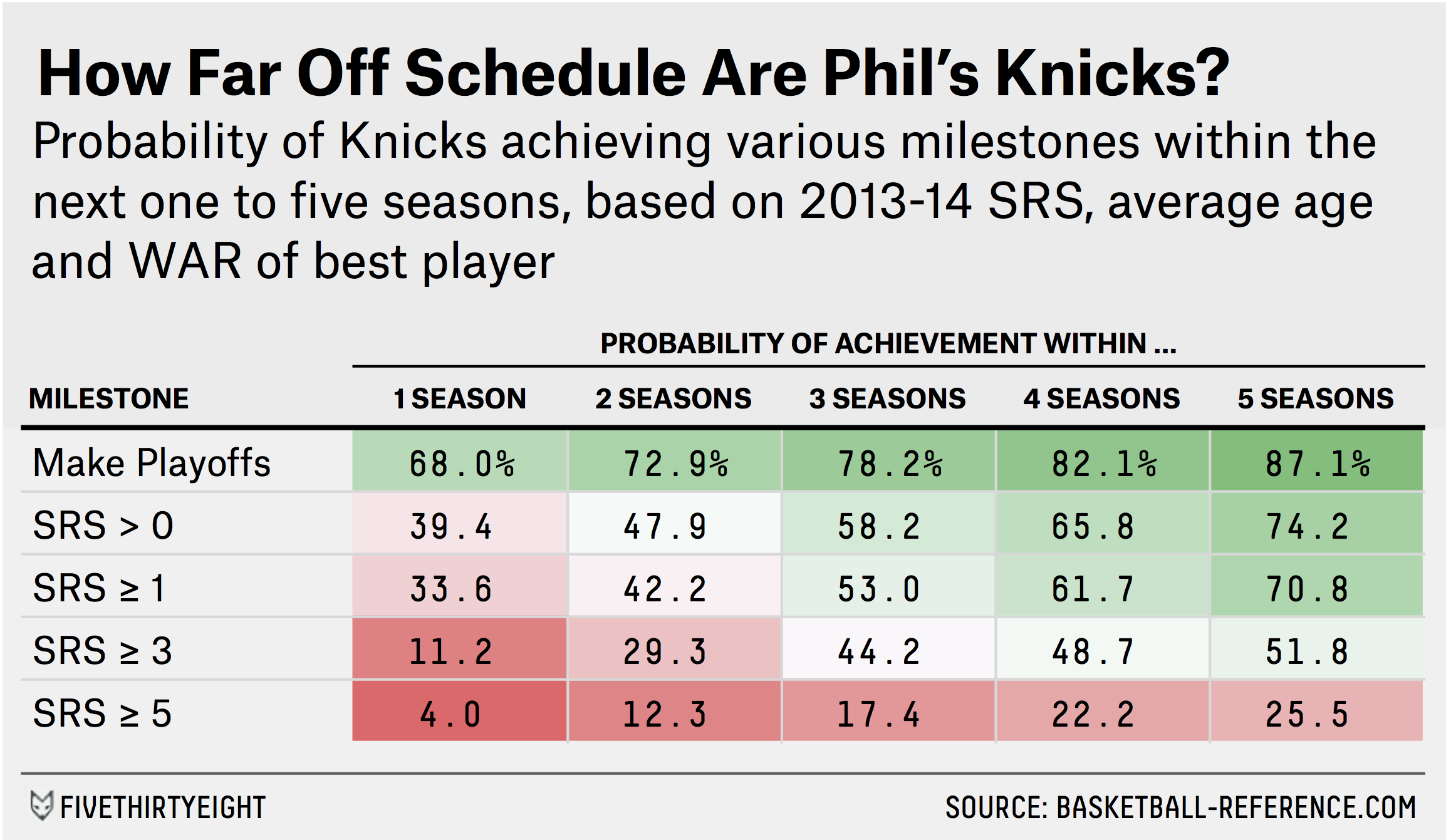 In some ways, Jackson is already far behind schedule. Based on historical trends, we’d expect 68 percent of Knicks-like teams to return to the playoffs within one season. (Instead, New York is currently 19.5 games out of the last playoff spot in a weak Eastern Conference.) But Jackson has also described his “ultimate goal” as bringing an NBA title back to New York after a 42-season drought, and to do that, a team typically has to be better than just a fringe playoff qualifier. The 25th percentile NBA championship team since the 1976 ABA-NBA merger had an SRS around 5 — a qualification that only five teams in 2014-15 met (after rounding up).

That’s a level of performance our model says the Knicks are unlikely to attain, even within five years. But there was a 50 percent chance that the Knicks would reach the tier right below that, with an SRS of 3, by the end of Jackson’s contract. And progress toward that goal might be best judged three seasons in; while we’d expect a Knicks-like team to post an SRS of 3 within two seasons less than a third of the time, the probability of checking off that milestone within three seasons was 44 percent.

In other words, while the Knicks have been absolutely awful this season, it’s still too early to ignore Jackson’s pleas for patience if building a contending team is the goal. We probably won’t really know what kind of progress he’s made in that direction for another couple of seasons.