Most of our focus this year has been on the battle for the U.S. Senate. But 36 states will hold gubernatorial elections Tuesday. We hope it’s not too late to give you some polling-based forecasts of how they might turn out.

We’ve adapted a pared-down version of our Senate model to handle gubernatorial races. Unlike the Senate model, these gubernatorial projections use polls only — rather than polls plus “fundamentals.” Otherwise, the models are about the same:

That’s pretty much it; you can read about a few other simplifications we’ve made in the footnotes2.

In Alaska, there’s no Democratic candidate on the ballot. Instead, the figures you’ll see below represent the margin between the independent Bill Walker and the Republican incumbent, Sean Parnell.

Georgia’s gubernatorial race — like the state’s Senate race — will require a runoff if no candidate gets past 50 percent of the vote. Our projection reflects the likelihood that Gov. Nathan Deal, the Republican, will win the plurality of the vote Tuesday; we are not making a separate projection for the runoff. (We can tell you how likely a runoff is to occur: Our model estimates there’s a 48 percent chance of one.)

Then there’s Maine, where the gubernatorial race had been a three-way contest among Republican Gov. Paul LePage, Democrat Mike Michaud and the independent Eliot Cutler. Cutler had averaged about 14 percent of the vote in recent polls, while LePage and Michaud hovered at about 40 percent each.

On Wednesday, however, Cutler announced that although he was not dropping out of the race, his supporters should feel free to vote for one of the other candidates. Cutler also lost the endorsement of popular Maine Sen. Angus King, a center-left independent, who endorsed Michaud instead.

This is an unusual circumstance: Cutler, in essence, halfway dropped out of the race. So in the absence of any polls conducted since his announcement, we’re assuming that Cutler will lose half his vote, which will be redistributed to Michaud and LePage. But we’re not assuming those votes will be distributed equally.

Instead, it’s likely that Michaud will benefit more from the news; Cutler takes left-of-center policy positions that are largely similar to Michaud’s. This is confirmed in a number of polls — conducted before Cutler’s announcement — that asked about the second choice of his supporters. They found, on average, that 64 percent of his vote would go to Michaud and 36 percent to LePage.3 So our model takes half of Cutler’s vote from any polls conducted before his announcement and gives 64 percent of it to Michaud (and the rest to LePage). This is enough to make Michaud a narrow favorite in the race (our model gives him a 56 percent chance to win). Without the extra votes from Cutler, his chances would be 36 percent.

Without further ado, here are our projections in each state. 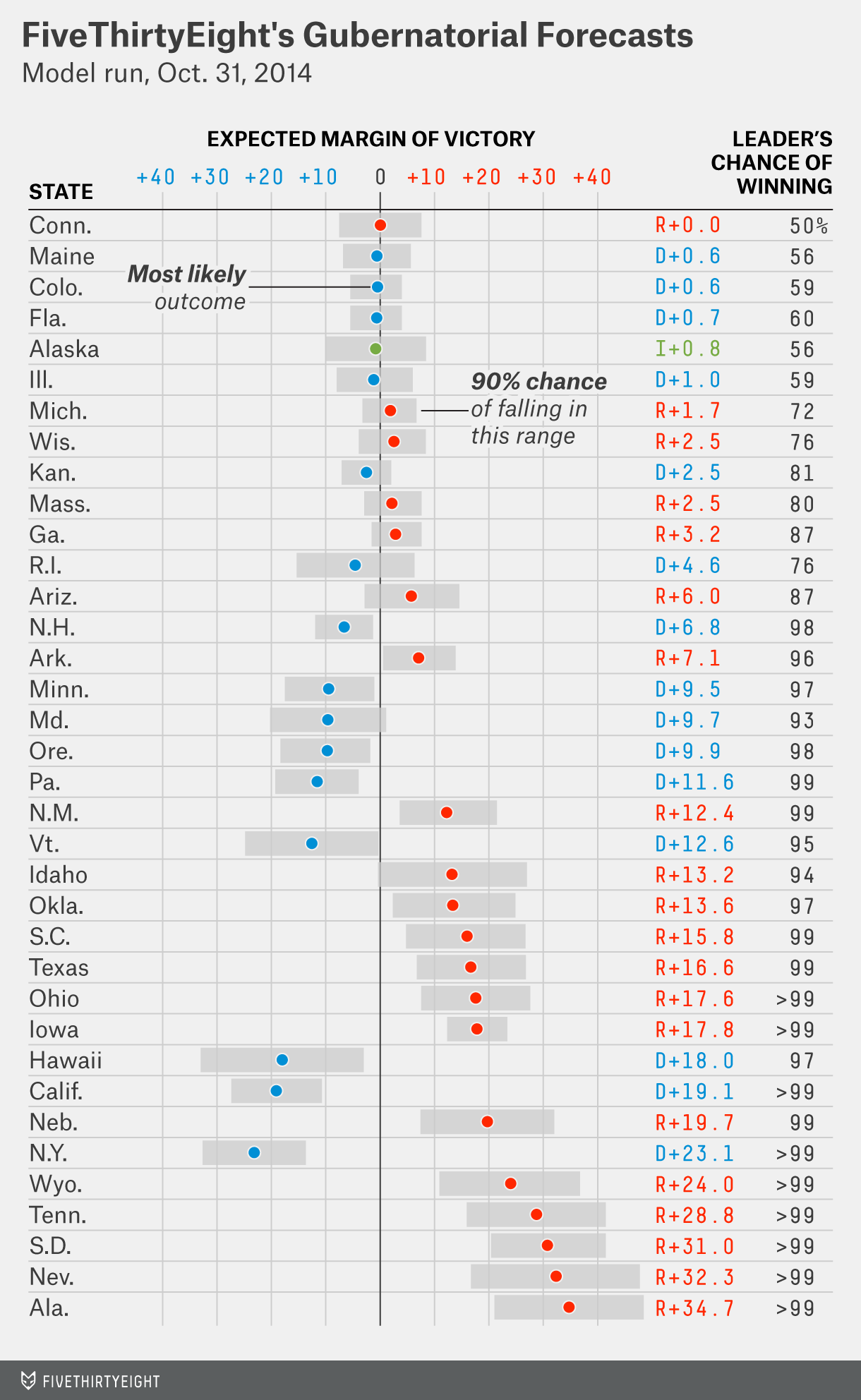 As in the Senate battleground, there are a number of extraordinarily close races: 11 in which the projected margin of victory is within 3 percentage points.

Some of these races, including Alaska and Connecticut, are about as close to true tossups as you can get. In others, one candidate has a slight advantage.

Gov. Scott Walker of Wisconsin, who leads by 2 or 3 percentage points in the polling average, is a 76 percent favorite to win re-election. Another Republican, Rick Snyder of Michigan, has a 72 percent chance.

Charlie Crist of Florida, the former Republican turned Democrat, is just slightly more likely than not to oust Republican Gov. Rick Scott from office. A slightly safer bet for a Democratic pickup is in Kansas, where Paul Davis has a 81 percent chance of beating Republican incumbent Sam Brownback.

Martha Coakley, the Democratic candidate in Massachusetts who famously lost her lead against Republican Scott Brown in a special Senate election in 2010, looks more likely than not to blow a big advantage again; our forecast has Republican Charlie Baker with an 80 percent chance of winning. And Democrats hoping for signs that Texas has turned purple will have to hold on for at least two more years. Wendy Davis, far behind in the polls, has only a 0.6 percent chance of beating Republican Greg Abbott.

We plan to have at least one more forecast of the gubernatorial landscape, along with a deeper analysis of some of the individual races, before Tuesday.