It’s a cliché: Every seat matters. But that’s especially true in this year’s Senate election. A very close result — 50-50 for Democrats, or 51-49 for Republicans — could be reversed later on in the event a senator switches parties or relinquishes his seat and triggers a special election.

Furthermore, in contrast to 2014’s Senate map — dominated by red states and Democrats who won election in the extraordinary Democratic year of 2008 — the 2016 map will be just the opposite. Most of the battlegrounds will be in blue states, and will include Republican incumbents who won election in the party’s wave year of 2010. If Republicans can finish with 53 or more seats this year, they’ll be much more likely to hold the Senate in 2016. Keep in mind that senators are elected to longer terms than anyone else in federal office. The ones elected this year will be in place for the entire first term of the 45th president — whether it’s Hillary Clinton, Marco Rubio, Rand Paul or someone else.

So let’s spend some time considering the range of possible outcomes. The 90 percent confidence interval on our forecast covers a range of 49 to 55 Republican seats. Democrats could limit Republicans to 48 seats if they have a very, very good night — while Republicans would need an extraordinary night (winning a state like Virginia where the polls show them behind by about 10 points) to get more than 55. 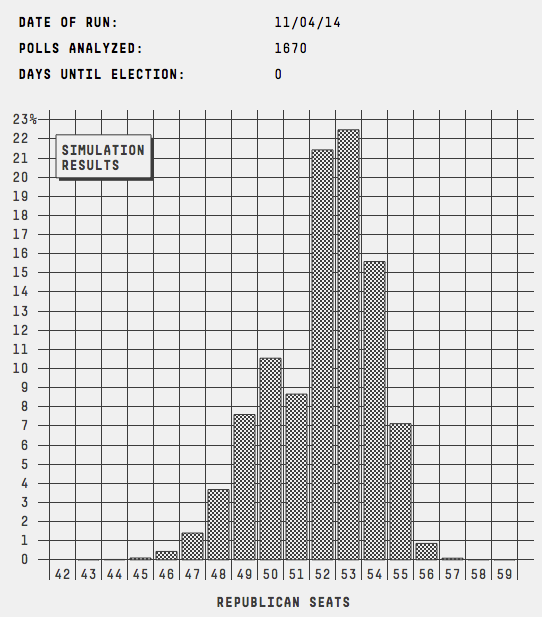 We’ll also be thinking about two other frameworks for evaluating the results. First, will the election be called Tuesday night or early Wednesday morning? The odds are that it won’t be, because of possible runoffs, slow vote counts and other circumstances. But if it is, that will represent very good news for the Republican party; Democrats would need a minor miracle to win the Senate without going to “overtime.”

And second, is there evidence of systematic bias toward either Democrats or Republicans in the polls? The outcomes at the tail ends of our probability distribution might suggest one.

Here are the five basic scenarios that account for these various measures of success:

Republicans have a 33 percent chance of having the Senate election called for them by midday Wednesday, according to our model. This would probably mean they win the election with some room to spare — they won’t need the seats in Louisiana and Alaska, for example, even though they might win them anyway.

Similarly, Republicans have about a 25 percent chance of finishing with 54 or more Senate seats, which would require them to win at least one race (most likely either North Carolina or New Hampshire) where they slightly trail in the polls. A win in New Hampshire, in particular, would be a bellwether for a Republican landslide year. Democrats have a reasonably popular incumbent there in Jeanne Shaheen, who has been elected and re-elected in New Hampshire many times. When candidates like that lose, it’s a sign of a wave.

Our probability distribution peaks at 52 or 53 Republican seats. That’s what you’ll get if the leader in the polls in every state wins (allowing Kansas, which is a toss-up, to go either way). Of course, it’s quite unlikely that the polls (or the FiveThirtyEight forecasts) will get every state exactly right. You could also get in this range if, for instance, Republicans failed to pull off Alaska but won North Carolina.

An outcome like this probably wouldn’t be “called” for Republicans on Tuesday night, although there are cases where a Republican win would be extremely statistically likely even if it hadn’t been declared officially by news organizations. For instance, if Republicans win 50 seats and need just one more from among Georgia (going to a runoff), Louisiana (ditto), Iowa (going to a recount) and Alaska (waiting for more ballots), their probability of capturing the Senate will be well above 90 percent.

Somewhat oddly, our forecast says there’s relatively little chance — only about 10 percent — of Republicans winning a 51-49 majority exactly. This is mostly because of the behavior of the independent in Kansas, Greg Orman, who, if he wins, has said he’ll caucus with whichever party has a clear majority. So Orman will often act as an “add-on” senator, bolstering the winning party’s margin in the Senate.

To a lesser extent, the low probability attached to a 51-seat Republican Senate reflects the distribution of the polls in the various battleground states. Republicans are narrowly ahead in most of them — if the polls are about right, the GOP should finish with at least 52 seats. But if the polls get one state wrong — say, Colorado — they could get other ones wrong as well. Republicans might not stay on the precipice of winning the Senate with 51 seats and could lose it entirely instead.

We covered the difference between these two types of Democratic wins in Tuesday morning’s Senate overview. It doesn’t concern the number of seats Democrats win so much as whether there is evidence of systematic bias in the polls against them: There would be such evidence in the shocker scenario but not in the squeaker scenario — the latter instead would be the result of Democrats winning seats for idiosyncratic reasons.

To make this distinction, we’d probably want to consider which states Democrats win to keep the Senate. Wins in Alaska and Kansas — unusual and hard-to-poll races — might be more in line with the squeaker case. Wins in Iowa and Colorado — well-polled states that tend to follow the national mood — might imply the shocker scenario instead.

We’d also want to look beyond Senate races. There are number of extremely close gubernatorial races — for instance, it would make Democratic partisans extremely happy if they were to knock off Republican Gov. Scott Walker of Wisconsin, who is a 75 percent favorite to keep his seat according to the polls. Another benchmark is if Democrats win the aggregate popular vote for the U.S. House.

Even in the “shocker” scenario, Democrats’ majority in the Senate will probably not wind up at more than 51/49. But there’s an outside chance they could do better than that. Mark Pryor of Arkansas and Alison Lundergan Grimes of Kentucky now look unlikely to win based on the polls — they have a 4 percent chance and a 2 percent chance, respectively, in our forecast. But unlikely is not the same thing as impossible. Between politics and sports stuff, we’ve issued thousands of probabilistic forecasts at FiveThirtyEight over the years. We know that those 2-percent chances — and even lower — do come through every once in a while.