Our last gubernatorial forecast continues to point to a lot of close contests. The favorite in 10 races — Alaska, Colorado, Connecticut, Florida, Illinois, Kansas, Maine, Michigan, Rhode Island and Wisconsin — has less than an 80 percent of winning. The favorite in Colorado, Connecticut, Florida and Maine has less than a 60 percent chance of winning.

The final slate of polls released on Monday only confirmed how close these races are. 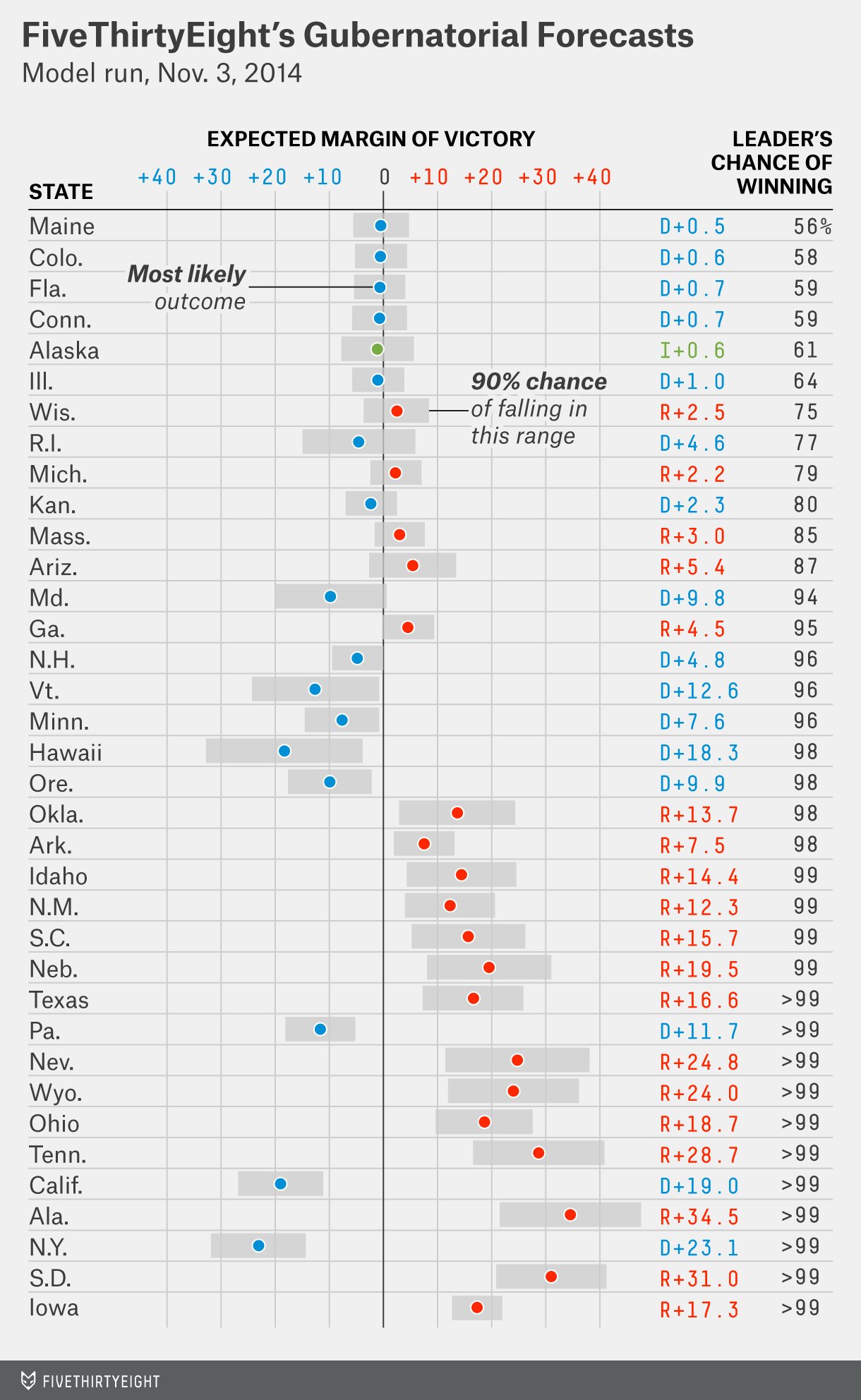 If every current favorite in FiveThirtyEight’s forecasts wins (which is unlikely), we’d be looking at a net gain of three governorships for Democrats and independents. Republican governors in Alaska, Florida, Kansas, Maine and Pennsylvania are forecasted to lose.

The GOP is projected to gain open seats from Democrats in Arkansas and Massachusetts.

Here’s a rundown of the main polls added since our last update:

A survey by Public Policy Polling (PPP) found Republican Gov. Sean Parnell of Alaska down 1 percentage point, 46 percent to 45 percent, to independent Bill Walker. Given Alaska’s history of taking a long time to count its votes and the tightness of this race, we may not know a winner for weeks.

In Colorado, Democratic Gov. John Hickenlooper trailed Republican Bob Beauprez 45 percent to 43 percent, according to a Quinnipiac University poll. But Quinnipiac has had a 2 percentage point pro-Republican house effect in 2014, so the model views this poll more as a tie.

Democratic Gov. Dan Malloy was either up 1 or 3 percentage points on Republican Tom Foley in a Quinnipiac poll of Connecticut, depending on how you allocate independent Joe Visconti’s vote share. Visconti dropped out of the race and endorsed Foley. PPP released a survey over the weekend also showing Malloy up 3 percentage points. PPP has a pro-Democratic house effect, so the two polls point to a slight Malloy lead.

In Florida, Republican Gov. Rick Scott trailed Charlie Crist 42 percent to 41 percent in a Quinnipiac survey. Over the weekend, PPP had Crist ahead by 0.2 percentage points. This race, between two unpopular candidates, is heading towards a photo finish.

In Maine, a new Maine People’s Resource Center poll showed Gov. Paul LePage essentially tied with Democrat Mike Machud, 44.7 percent to 44.4 percent. This survey was conducted entirely after independent Eliot Cutler released his supporters to vote for someone else. So even with Cutler all but out of the race, both candidates have a real shot.

And finally, in Michigan, a Mitchell Research poll gave Republican Gov. Rick Snyder a 47.1 percent to 46.9 percent edge over Democrat Mark Schauer. Additionally, a Clarity Campaigns survey put both candidates at 45 percent. That’s actually good news for Snyder because their last poll had Snyder down 3 percentage points, and Clarity Campaigns has had a 2 percentage point pro-Democratic house effect this cycle.