While the national political scene has decayed into polarized stagnation, Americans’ views of state governments have remained mostly positive. That’s probably part of the reason why governors seem to have an advantage when running for president. Yet in Florida, home to one of the nation’s marquee gubernatorial races, Democrat Charlie Crist and Republican incumbent Rick Scott are teetering on becoming the least-liked pair of candidates for any governor’s race in the past 10 years.

Scott was down by 15 percentage points in polls taken early this cycle against former Republican governor (turned Democratic candidate) Crist. But Scott and his allies have closed the gap, running millions of dollars in TV advertisements. Many of the ads, instead of praising Scott, disparaged Crist. Crist was seen as bipartisan, for instance, and so ads said he was actually “slick” and more interested in career advancement.

Both Crist and Scott hold negative net favorable ratings (the percentage of people with a favorable view minus the percentage with a negative view). No other gubernatorial campaign in the country currently features such bipartisan disdain. Thirteen races for governor have had at least one live interview poll that asked about candidate images since the beginning of May. Among the candidates in those races, the average net favorable rating is just over +10 percentage points, compared to the -4 points in Florida. (I limited my search to live interview polling because it is thought that favorable ratings are systematically lower across alternative polling technologies.) 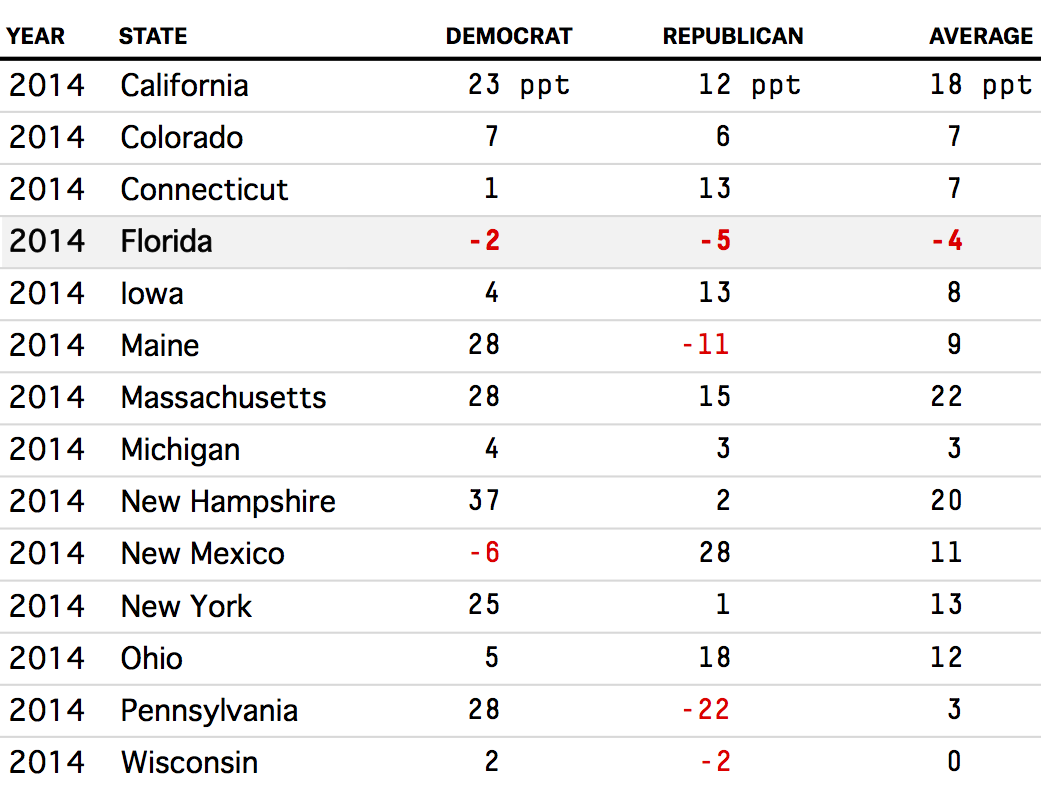 Indeed, Florida is an outlier even if we include the past several election cycles. I gathered favorable and unfavorable ratings in every gubernatorial race from the past 10 years in which at least one live interviewer poll was released within three weeks of the election. Out of 109 races, 54 gubernatorial elections since 2005 met this criteria (see the table at the end of this article).

It’s rare for both gubernatorial candidates to finish the campaign season with a negative net favorable rating — in fact, it’s only happened twice.

The other was the 2009 New Jersey gubernatorial election, in which the incumbent Democratic governor, Jon Corzine, and Republican Chris Christie pummeled each other with negative ads. By the end of the campaign, a large majority of voters said both had attacked the other unfairly. Christie won as the lesser of two evils.

Christie, however, had a net favorable rating of -1 percentage point, a bit better than Crist’s current net favorable, -2 points. So if the campaign ended today, Floridians would dislike Scott and Crist more than any pair for which we have data over the past 10 years.

Of course, there is still a long way to go. But with Crist now airing negative advertisements against Scott, it’s not difficult to imagine both candidates’ images falling further.