The shutdown was indicative of a second polarization, largely caused by the first: Ideologically, the House and Senate are more divided than at any time since the end of World War I.

You can measure this statistically using the Common Space DW-nominate scores, a system which rates members of Congress on a scale from -1 (most liberal) to +1 (most conservative) based on their roll call votes. I’m using the Common Space scores, which rate senators and representatives on one scale, so we can compare public officials across the House and Senate. This is done using bridge legislators (i.e. those who served in both bodies). We can also compare across time thanks to legislators who served in multiple Congresses.

Here are the scores for the median legislator in each body over time, and the differences between the two medians. 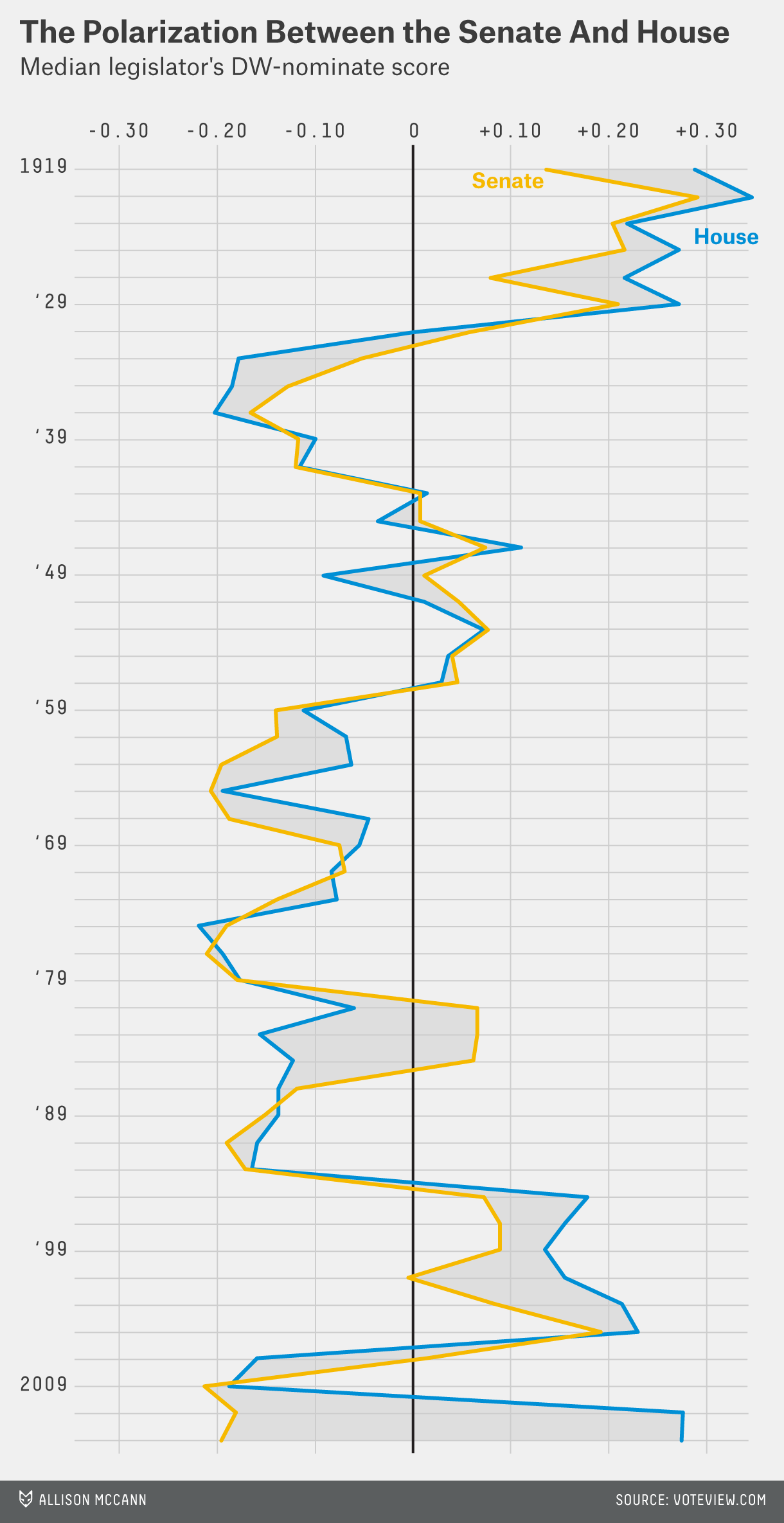 The House and Senate’s ideologies move mostly in unison. Gaps are usually small and appear during periods of split control, as we have now. For example, there was a modest gap in the early and middle 1980s, when Democrats held the House and Republicans the Senate.

But the past few years have been very different. The gap between the House and Senate is huge. The difference in score is 0.47 for 2013. The next widest is 0.46 for the 2011-12 Congress. There’s no other score above 0.4 in our data set. During the aforementioned early and middle 1980s, the space between House and Senate scores was, at most, a little more than 0.2 points.

What is causing this yawning split between the House and Senate? For one, this is only the seventh time since World War I where one party controlled the House and another the Senate. But that’s not all of it.

Although there is definitely some disagreement, the prevailing view is that Republicans have moved further to the right than Democrats have moved to the left. This is seen best when comparing within bodies, though we also see it when comparing between bodies.

When we contrast the two bodies, we see that the House is slightly more conservative at 0.27 than the Senate is liberal at -0.20. That fits with the idea that polarization is “asymmetric,” with House Republicans more responsible than Senate Democrats, but it’s clear that the median member of both chambers is closer to the poles than they usually are. The median House member in the current Congress is the fourth-most conservative out of 49 Congresses since the end of World War I. The median senator is tied for the fourth-most liberal.

Basically — and this will shock no one — Congress is a mess: The two parties are acres apart, and the two branches are the furthest apart they’ve been in our lifetime (though that may change come November).