It’s reasonably well known that governors have a more successful record than senators when it comes to winning presidential nominations. Throughout American history, about twice as many governors as senators have been chosen to be standard bearers by the major parties, even though at any given moment there are only half as many sitting governors as sitting senators.

The advantage may be even more powerful than you think. Not only are governors more likely to win nomination, they also do better than senators even after accounting for their polling. That is, if you take a governor who is polling at 10 percent and a senator who is polling at 10 percent in a race, and the candidates seem about equal in most other respects, the governor is more likely to outperform his polling and win the nomination. Governors likewise hold an advantage over members of the House of Representatives and over holders of most other elected offices — everyone except presidents and vice presidents.

Since the modern primary era began in 1972, there have been 15 competitive presidential primary campaigns. (The ones I exclude are the 1972, 1984, 1992 and 2004 Republican nominations and the 1996 Democratic nomination, with the 1992 G.O.P. field really being the only debatable case.) The 15 competitive nominations have been won by 5 candidates whose most recent elected office was governor, 5 United States senators, 3 vice presidents, and 2 sitting presidents. (I am counting Gerald Ford as a sitting president in 1976 even though he was appointed, not elected, to the job; other than that, candidates throughout this post are classified by the office to which they had been most recently elected, even if they had left office before running for president.)

This data isn’t terribly useful, however, without considering how many candidates in each category ran for higher office. Only about half as many governors as senators have run for president since 1972, so their batting average is much higher: 17 percent of governors who officially ran for their nominations went on to win them, versus 9 percent of senators who did so. 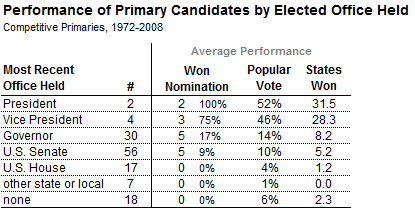 This is not quite what I’m interested in, however. Instead, for purposes of forecasting the field, it would be more useful to see how candidates perform relative to their polling.

For a previous study, I built a database of presidential primary polls conducted in January through June in the year before the primaries were held (that is, the period that is now ending in the 2012 Republican race). To this database I have added candidates who eventually ran but were not included in an early poll (they are treated as having had a polling average of zero), and I have subtracted those who were included in the early polls but did not wind up running. We can then compare the share of the primary vote that each candidate ultimately received with the early polling: 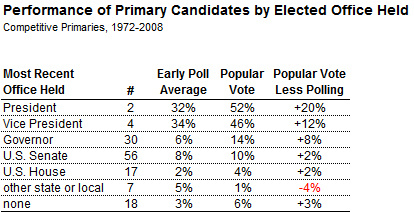 Note that most candidates are liable to improve by this metric, since the early polling will include support for candidates who never join the race, along with undecided voters — so there are some extra votes to go around. But governors make considerably bigger gains than senators do — the difference between the two groups is statistically significant.

Presidents and vice presidents have done even better than governors, but the sample size is extremely small. Senators, on the other hand, don’t do any better than members of the House of Representatives relative to their polling: candidates in either group gain an average of about 2 percentage points between the early polls and their actual finish.

Another factor that is helpful to account for is the length of time a candidate has spent away from elective office, if any. Of the nominees since 1972, all but three were in office when nominated, the exceptions being Carter in 1976 (two years removed from the governorship of Georgia), Ronald Reagan in 1980 (it was six years since he’d been governor of California) and Walter Mondale in 1984 (four years after he’d finished his term as Carter’s Vice President). On the other hand, you have candidates like Mike Gravel, who ran for president in 2008, 28 years after he had last represented Alaska in the Senate, and Harold Stassen, who ran for the Republican nomination in 1988 some 46 years after he left office as governor of Minnesota, a record that may prove harder to break than Joe DiMaggio’s hitting streak.

By using regression analysis, we can develop a formula to predict a candidate’s share of the popular vote based on average standing in the early polls, the type of elected office most recently held, and the number of years (if any) since leaving that office. To simplify things a bit, I’ll group presidents and vice presidents together, and lump together the eccentric group of candidates who held other state or local offices (mayors, for instance) or had never been elected to anything at all. That formula looks like this: 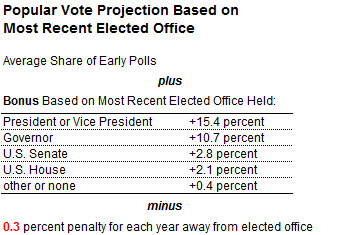 Let’s look at Tim Pawlenty as an example. Right now, Mr. Pawlenty averages about 5 percent in the national polls; that’s our starting point. To that, the formula says, we add a substantial 10.7-percentage-point bonus because his most recent elected office was governor. Mr. Pawlenty then gets a modest penalty because, although he was a governor quite recently, he is not in office now. Each year away yields a deduction of three-tenths of a point (think of this as the candidate getting “rusty”), and by the time that next year’s general election rolls around, Mr. Pawlenty will have been out of office for two years, so he loses 0.6 percentage point in all.

Our forecast, then, is that Mr. Pawlenty will finish with about 15 percent of the primary vote, despite his mediocre standing the polls right now: 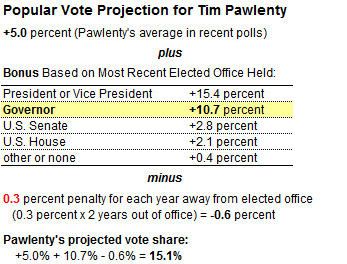 Contrast that with a candidate like Rick Santorum, the former senator from Pennsylvania. Right now, Mr. Santorum is averaging about 3 percent in the polls — not much worse than Mr. Pawlenty. But Mr. Santorum can expect a much smaller gain because of his former office — just 2.8 percentage points, rather than 10.7. On top of that, he will have been out of office for six years by next November, so his “rust” penalty is more substantial. Our forecast is that Mr. Santorum will get just 4 percent of the primary vote: 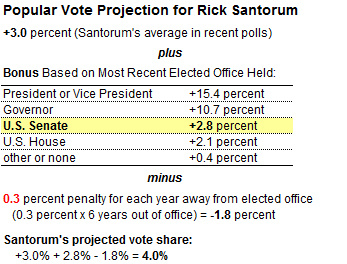 To be clear, this forecast comes with a very high margin of error, and the errors won’t be normally distributed: most candidates who run for president flop, while a small minority turn out to be tremendous successes. So don’t put too much weight on this forecasting exercise; it’s just one of the (many) perspectives that can be applied to this year’s presidential campaign.

The qualitative insight is more robust than the quantitative results: Governors seem to have an intrinsic advantage when it comes to running for president. I’ll leave it to others to determine why, but here are some things you might consider:

First, a presidential campaign is quite an undertaking. You have to manage a fairly large staff, balance the books of a multimillion-dollar operation, cultivate donors, make public appearances, give speeches, kiss babies, perform well in debates — it helps to have executive experience and a diverse range of skills, and those are probably cultivated better as a governor than as a senator.

Second, the Congress is an inherently unpopular institution. Governors can escape this burden — they can run as Washington outsiders, and they can run more on their individual records.

Finally, governors may be giving up more to run for president. A senator, unless he or she has a party leadership job, does not have many specific responsibilities and obligations; there are few truly important floor votes, and many of the remaining functions that a senator needs to perform can be taken care of in and around Washington, where it is easy to fit in frequent appearances on the Sunday talk shows and do other things that may help a presidential bid. A governor cannot hedge bets as much: Running for president probably will erode popularity at home, particularly if the campaign goes badly. (Look at what happened to Bill Richardson’s popularity in New Mexico, for example.) So when a governor does run, it may be that he or she is more fully committed to the enterprise and has more tolerance for risk, both of which are almost certainly desirable qualities in a person who wants to become the President of the United States.