Americans are starting fewer companies. New research released Thursday provides some of the first hints about why.

I’ve written several times about the long decline in U.S. entrepreneurship. It’s a counter-intuitive claim given the nearly constant buzz about “disruption” in Silicon Valley, but the data is clear: Multiple sources show the startup rate has been falling for decades.

What has been much less clear is why. Several of the most obvious explanations don’t bear out. The decline in startups doesn’t line up with the aging of the baby boom generation. It isn’t limited to “mom and pop” retailers or other low-growth sectors. And the long, steady nature of the trend means it can’t be the result of short-term economic or political cycles. Economists have, until recently, focused mostly on documenting the decline in entrepreneurship and studying its implications, not explaining why it’s happening.

That is starting to change. In a new report from the Brookings Institution, economists Ian Hathaway and Robert Litan offer two partial explanations: population growth and business consolidation.

Hathaway and Litan look at more than three decades of data on business startups, expansions and failures from the Census Bureau’s Business Dynamics Statistics. They find a strong correlation between a region’s population growth and its startup rate. That makes intuitive sense: For example, Arizona, Florida and Utah experienced booming economies for much of the late 20th century that attracted new residents and new entrepreneurs. Overall population growth, however, has been gradually slowing over the past 20 years, possibly dragging the startup rate down with it. From Brookings: 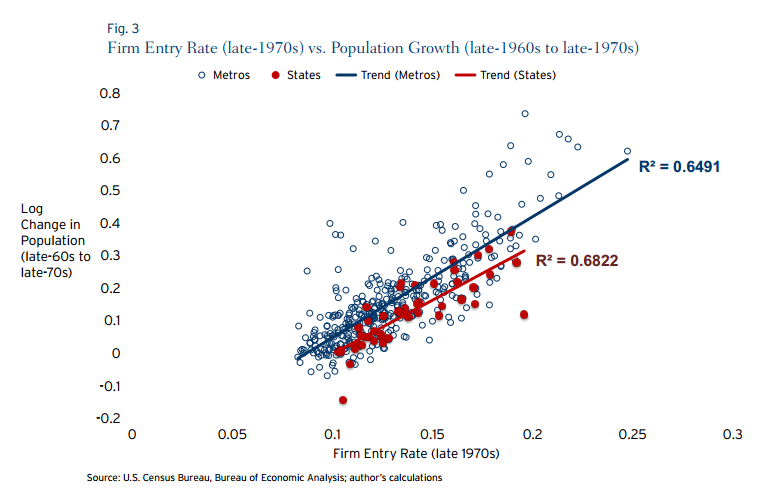 The second big trend Hathaway and Litan look at is consolidation. Virtually every sector of the economy is more dominated by big companies today than it was 30 years ago. The authors find that regions that have seen more consolidation have also seen bigger declines in entrepreneurship. That, too, makes sense: For all the talk about disruption, it’s much harder to break into an industry that’s dominated by a handful of big, entrenched incumbents.

These two factors together explain roughly three-quarters of the decline in entrepreneurship, according to a regression model developed by Hathaway and Litan. That means other, still unidentified factors such as taxes, regulations, immigration or education are also playing an important role. Moreover, those factors could be contributing to the increasing explanations that Hathaway and Litan have already identified; immigration policy, for example, affects population growth, while regulation and tax policy can influence business consolidation.

Hathaway and Litan end their paper with a call for more research. “Nonetheless,” they write, “we believe that our estimates go a long way toward understanding cross-regional variations in entrepreneurial activity, as well as the national decline in the startup rate over the last few decades.”