A couple of months back, I noted that despite all the attention paid to Silicon Valley’s startup economy, overall entrepreneurship in the U.S. has been falling for more than three decades. Last week, economists Ian Hathaway and Robert Litan at the Brookings Institution highlighted a related trend: American companies are getting older. In 1992, 60 percent of Americans worked for companies that had been around for at least 16 years. Today, that share tops 70 percent.

Hathaway and Litan call the trend “disturbing,” given that young companies account for a disproportionate share of job growth and tend to be more innovative than older ones.

But over at Vox, Matt Yglesias is unconcerned. Maybe, he says, American companies are simply getting older because Americans themselves are. He points to research showing that the typical successful entrepreneur is 40. Because of the aging of the baby boom generation, the U.S. has a lot fewer 40-year-olds than it did 20 years ago. But fear not, Yglesias says: The millennials, the largest generation in U.S. history, will be turning 40 soon enough, and the trend will reverse.

The story about aging is so well-known that people tend to neglect this sub-trend of the youth bulge. But right now we’re at a moment where a lot of inexperienced workers are entering the labor market, and 10 to 20 years from now we’ll be in a moment when a lot of experienced workers are founding new businesses. But for the past 10 years, we’ve been seeing a demographic trend that’s unfavorable to entrepreneurship.

I’ll have more on the issue of entrepreneurship and aging companies in a coming, more in-depth article. But it’s worth taking a moment to note that while the aging of the U.S. population probably plays some role in the entrepreneurial slowdown, it’s far from the only explanation.

The simplest way to see this is via the chart below. The red line is the startup rate (the share of U.S. companies that are less than a year old). The blue line is the share of the population that is between ages 35 and 45, five years on either side of Yglesias’s peak age for starting a business. It’s clear that whatever is driving down the startup rate, it began long before the boomers began to age out of their prime entrepreneurial years. (Note: For the years 1981 to 1989, the population data in the chart is imputed from data from the 1980 and 1990 censuses.) 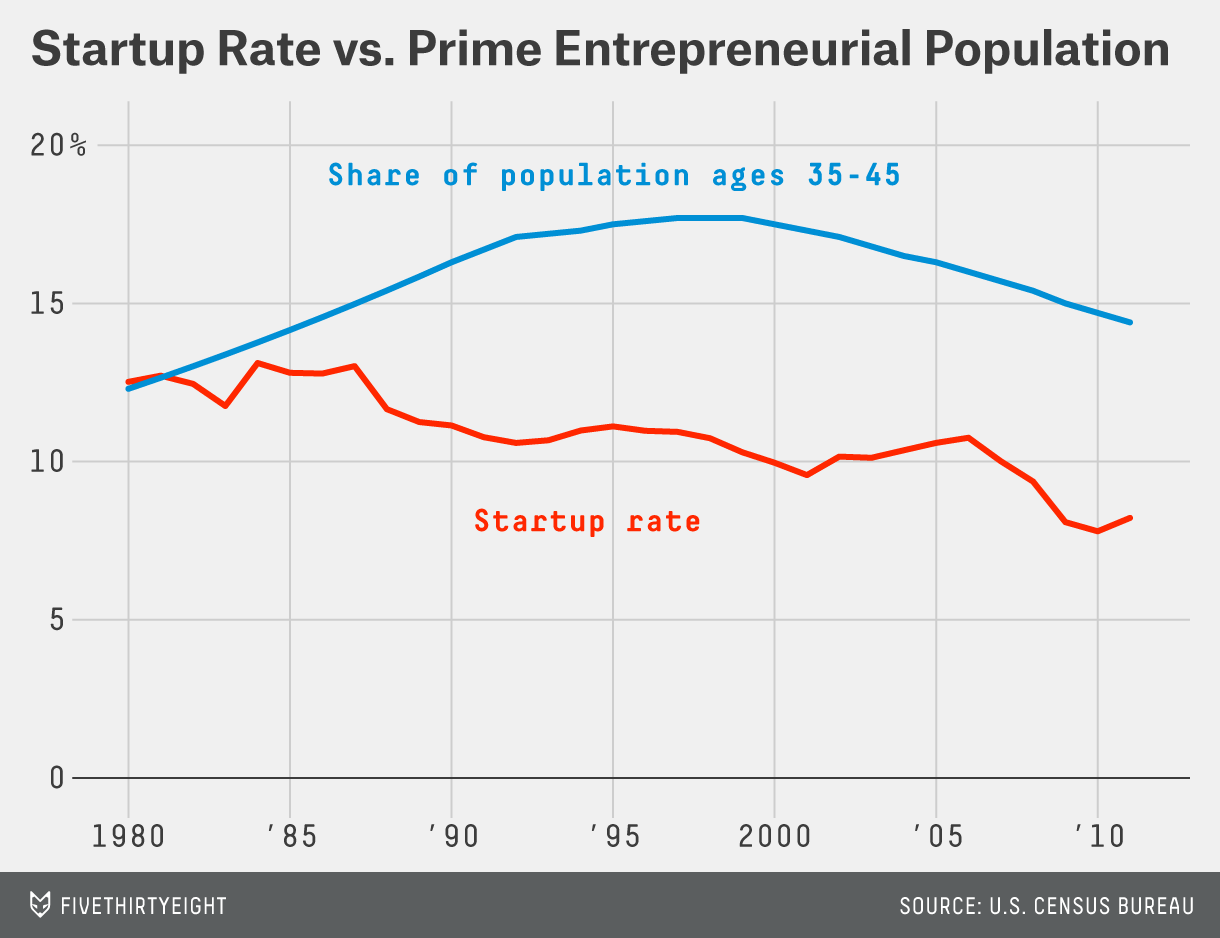 There is other evidence that America’s aging population can’t explain its aging businesses. Self-employment rates, for example, have declined for all age groups (other than teenagers) over the past 20 years. And as Hathaway and Litan showed in an earlier paper, the decline in entrepreneurship is remarkably constant across regions and industries, hitting youth-heavy tech hubs and graying industrial cities alike. Demographics may be contributing to the problem, but they aren’t the primary cause.