Mark Zuckerberg was a billionaire before age 30 and investors are fretting over the prospect of an another tech bubble, but according to the data, U.S. entrepreneurship is on the decline.

Americans started 27 percent fewer businesses in 2011 than they did five years earlier, according to data from the Census Bureau. As a share of all companies, startups have been declining for more than 30 years. 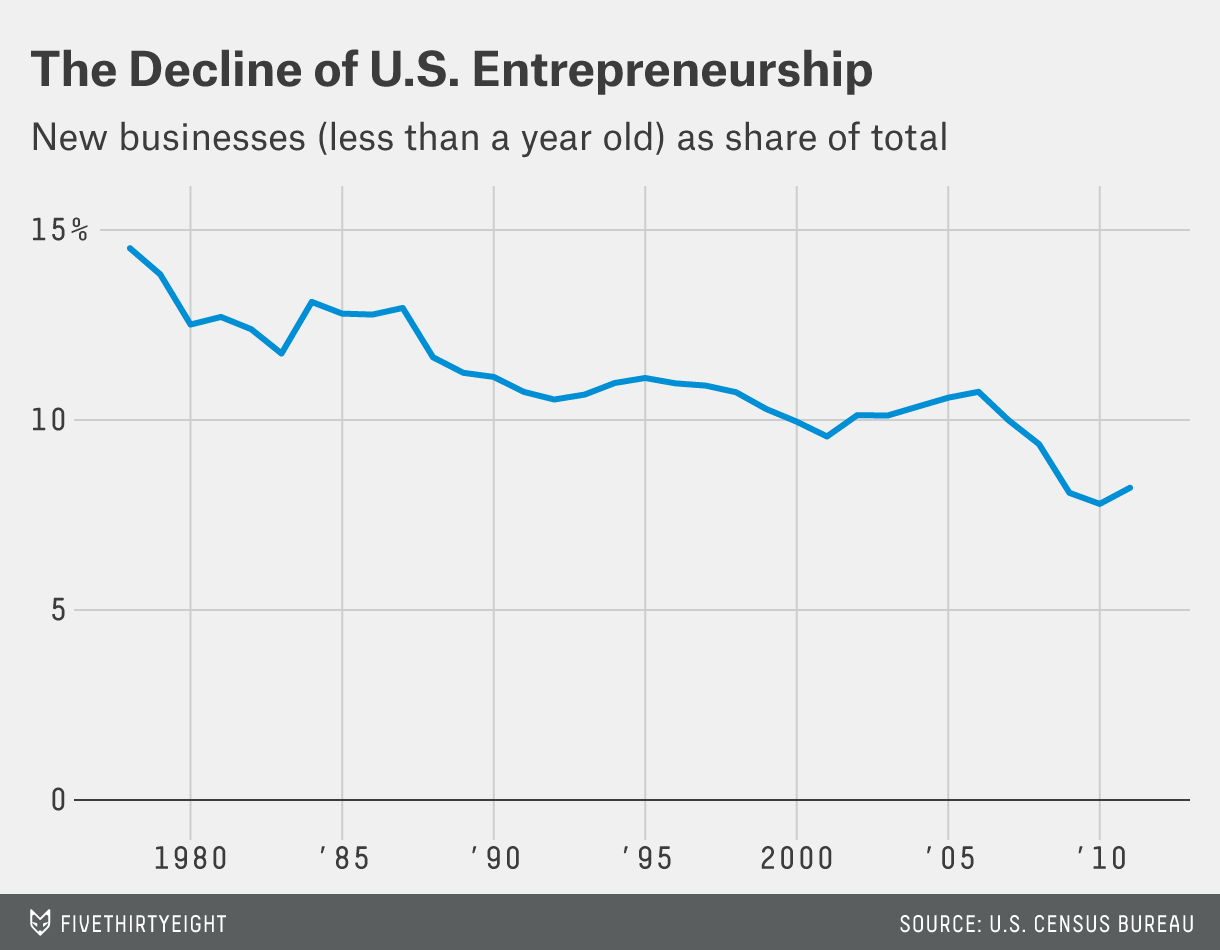 It isn’t clear what’s causing that decline, which accelerated during the recession but long predates it. The aging of the baby boom generation may be part of the explanation, since people are more likely to start businesses when they are younger. The U.S. economy is also increasingly dominated by large corporations, suggesting deeper structural changes working against small companies. People have pointed to other explanations, from increasing licensure requirements in many industries to high corporate tax rates to a broader decline in innovation and productivity growth.

Whatever the reason, the decline has economists worried. New businesses are a key driver of job growth, responsible for more than 15 percent of new job creation despite accounting for just 2 percent of total employment. And they play a vital role in promoting innovation and productivity gains across the economy. In a recent report from the Brookings Institution, Ian Hathaway and Robert Litan wrote that the decline in entrepreneurship “points to a U.S. economy that has steadily become less dynamic over time.”1

“Business dynamism is inherently disruptive,” they wrote, “but it is also critical to long-run economic growth.”

Some economists are less pessimistic, in part because of the way the government counts startups. These days the term “startup” calls to mind social networks and iPhone apps, but the Census Bureau’s data casts a much wider net, lumping tech companies like Airbnb and Uber in with barbershops and dry cleaners. That second group is much larger but also much less important from the standpoint of job growth and innovation.2 “The birth and death of small family businesses is one kind of ‘economic dynamism,’” economist Noah Smith wrote on his blog last week, “but not really the kind that leads to increasing living standards or technological progress.”

In other words, maybe the U.S. hasn’t seen a decline in the kind of fast-growing startups that economists care about most. It’s possible that this kind of entrepreneurship is doing fine and it’s just being hidden by the long and well-documented decline in family-owned businesses.

The available evidence, however, doesn’t seem to support that theory. For one thing, the decline in entrepreneurship is remarkably broad-based, not isolated to the industries such as retail where big corporations have edged out family businesses. According to the Brookings paper, every major industrial sector, every state and nearly every large city has a lower startup rate today than it did three decades ago.3

Even the tech sector, the industry most closely associated with startups, isn’t immune to entrepreneurial malaise. According to a recent paper from the Kauffman Foundation, the tech industry’s startup rate rose sharply in the late 1990s but fell quickly after the tech bubble burst and, at least as of 2011, has yet to rebound. The tech sector still forms businesses at a higher rate than other sectors, but the decline in its startup rate has been just as steep.

Broad sectors don’t tell the whole story, however. After all, Walmart and Starbucks grew into some of the country’s biggest companies despite belonging to supposedly staid sectors. If we really want to distinguish high-growth, innovative startups from mom-and-pops, we have to drill down to the individual company level.

Unfortunately, the Census Bureau doesn’t provide company-level data for privacy reasons. But it does classify companies by how old they are and how many employees they have. That means we can take all companies that are 5 years old and see how many stayed small (fewer than 10 employees) and how many experienced growth (20 or more employees). If the decline in entrepreneurship were concentrated among low-growth family firms then we’d expect to see fewer small companies after five years and more big ones. 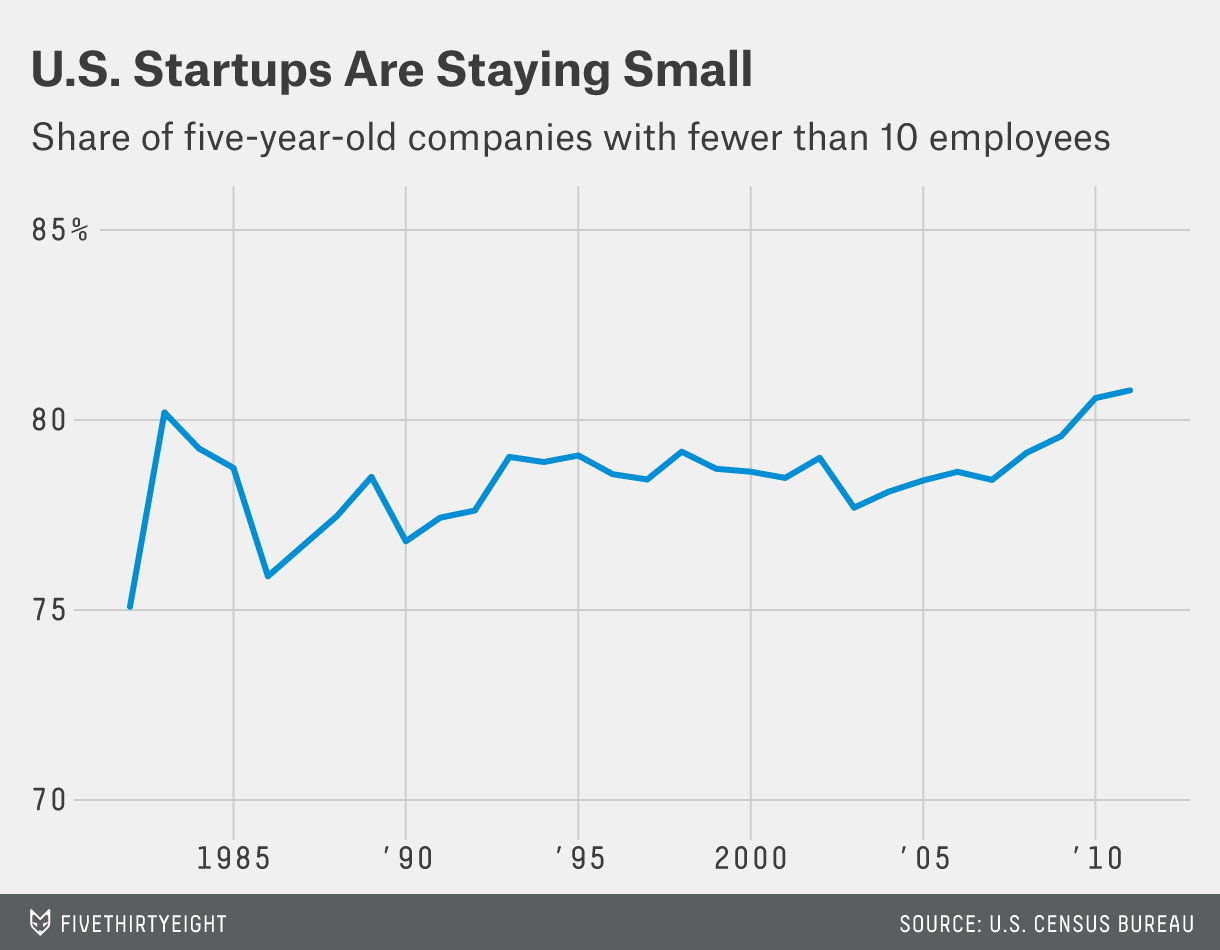 Instead, the data shows the opposite: Fast-growing startups are disappearing more quickly than slow-growing ones. In 1982, 75 percent of all 5-year-old firms had fewer than 10 employees, while 12 percent had 20 or more. Two decades later, the share of new companies that stayed small had risen to 80 percent, while only 8 percent grew to 20 or more employees.4

This approach isn’t perfect. It only reveals outcomes, not intentions; there’s no way to distinguish between a five-person company that never planned to grow and one that just hasn’t yet hit it big. And this analysis doesn’t tell us anything about the companies that didn’t make it to five years. It’s possible that the problem doesn’t lie in Americans’ willingness to pursue their entrepreneurial dreams but in their success once they do so. But for whatever reason, the number of startups that manage to grow is declining.5

It isn’t clear how long this trend will continue. The Census Bureau was planning to release 2012 data this week but delayed the release by a year in order to improve “quality and consistency” of the figures. Separate data from the Bureau of Labor Statistics, which measures entrepreneurship somewhat differently, shows a modest uptick in 2012 and 2013.6 But so far, at least, there’s little sign that the longer-term decline is reversing — or that it’s limited to mom-and-pop companies.