It’s Mark Zuckerberg’s 30th birthday Wednesday. If you’re not familiar with the name, you should be familiar with the company that’s earned him $26.6 billion dollars: Facebook. How common is it for someone so young to be so rich? And have the other young billionaires also made their money through online ventures?

According to Forbes, there are 1,640 billionaires in the world; 29 of them are younger than 40. They are mostly American men. 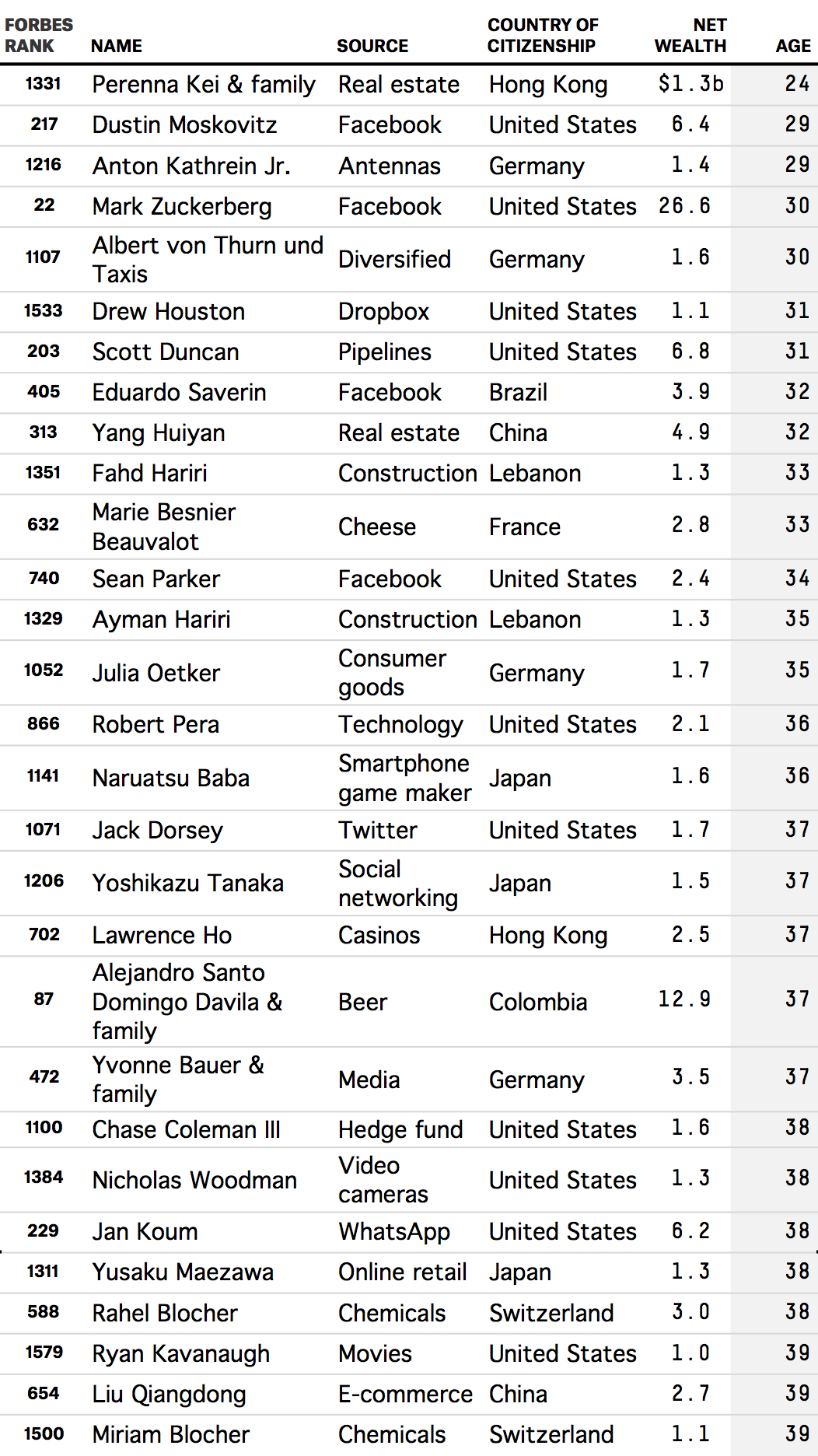 Industry
Four of those 29 young billionaires made their money through Facebook. In fact, the tech world as a whole is a good place for young money; 13 of the under-40 billionaires on the Forbes list (all of them men) worked in the tech industry. Startups like WhatsApp, Twitter and Dropbox feature on the list — although as Ben Casselman explains, those companies don’t reflect the downward trend in American entrepreneurship.

For some billionaires, no matter how young, money can come through more established means. By the age of 33, Marie Besnier Beauvalot accrued $2.8 billion through cheese (yup, she’s French), while Alejandro Santo Domingo Davila and his family have earned $12.9 billion selling beers.

Wealth
Among them, the 29 under-40 billionaires have $107.5 billion in net wealth; that’s more than the gross domestic product of Bolivia, Ivory Coast, Cyprus and Estonia combined. The group’s median net worth is $1.7 billion. Zuckerberg is the richest of the lot — worth over $26 billion, according to Forbes, and accounting for one in every $4 of wealth in the young billionaires club.

Age
Zuckerberg is also one of the youngest billionaires. He has only three juniors on the list: Dustin Moskovitz, 29, also of Facebook; Anton Kathrein Jr., 29, the third generation in his family to lead Kathrein-Werke AG, an antenna-manufacturing company; and Perenna Kei, who at 24 is the veritable baby of the group. Kei is a giant in Hong Kong real estate.

In sum, if you want to be a billionaire before 40, start a tech company in the United States. Also, be a man; only seven wealthy young people on the list were women, none of them from America.