Political ads on TV: Past research has shown just how much political ads can act as cash cows for TV stations. But Philip Bump at The Washington Post wanted to get a much more detailed understanding of the phenomenon, so he found a way to trawl through PDF reports about ads for Senate candidates, and then see during which specific shows they appeared. When he analyzed the results, he found that Republicans went for “Big Bang Theory” in prime time while Democrats were far more likely to air ads on “Scandal” and “Big Brother.” 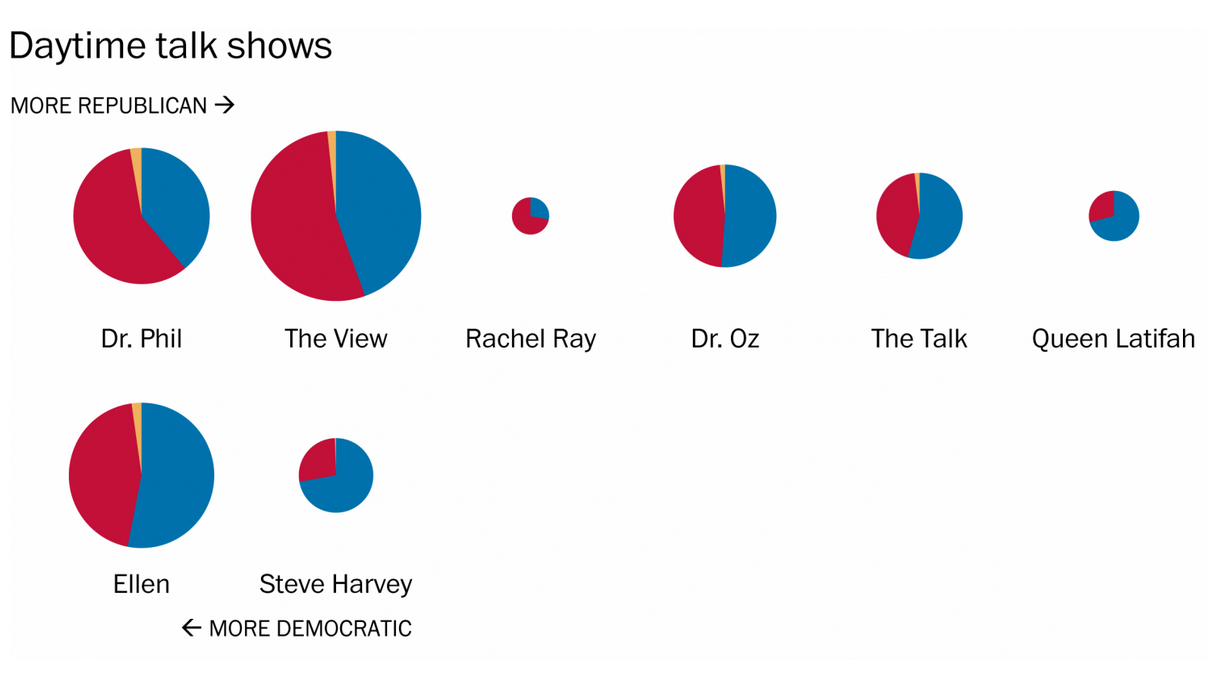 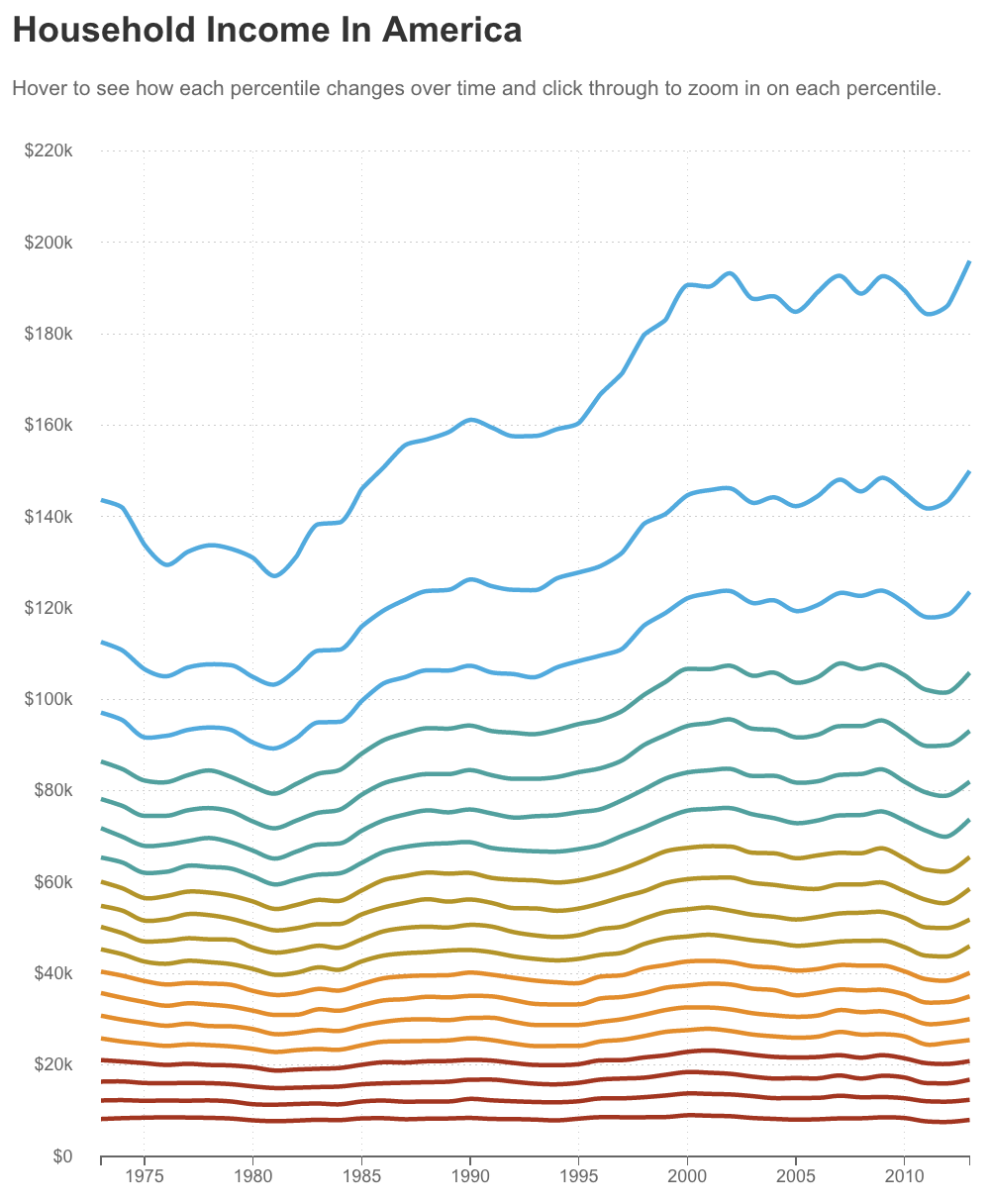 40 years of household income: Sometimes a chart is worth a thousand words, as Quoctrung Bui demonstrated in this NPR article on income inequality in the United States. Bui split American households according to their wealth and showed how the income of the poorest 5 percent, the richest 5 percent and everyone in between has changed over the past 40 years. The result is an elegant demonstration of how income growth has been concentrated among the wealthy.

What a United States of College Football Fans would look like: The Upshot has already published maps on baseball and basketball fandom by analyzing data on Facebook likes. This one on college football reveals a slightly different trend, however: Unlike rooting for professional sports leagues, American college fandom doesn’t cross state boundaries that much. 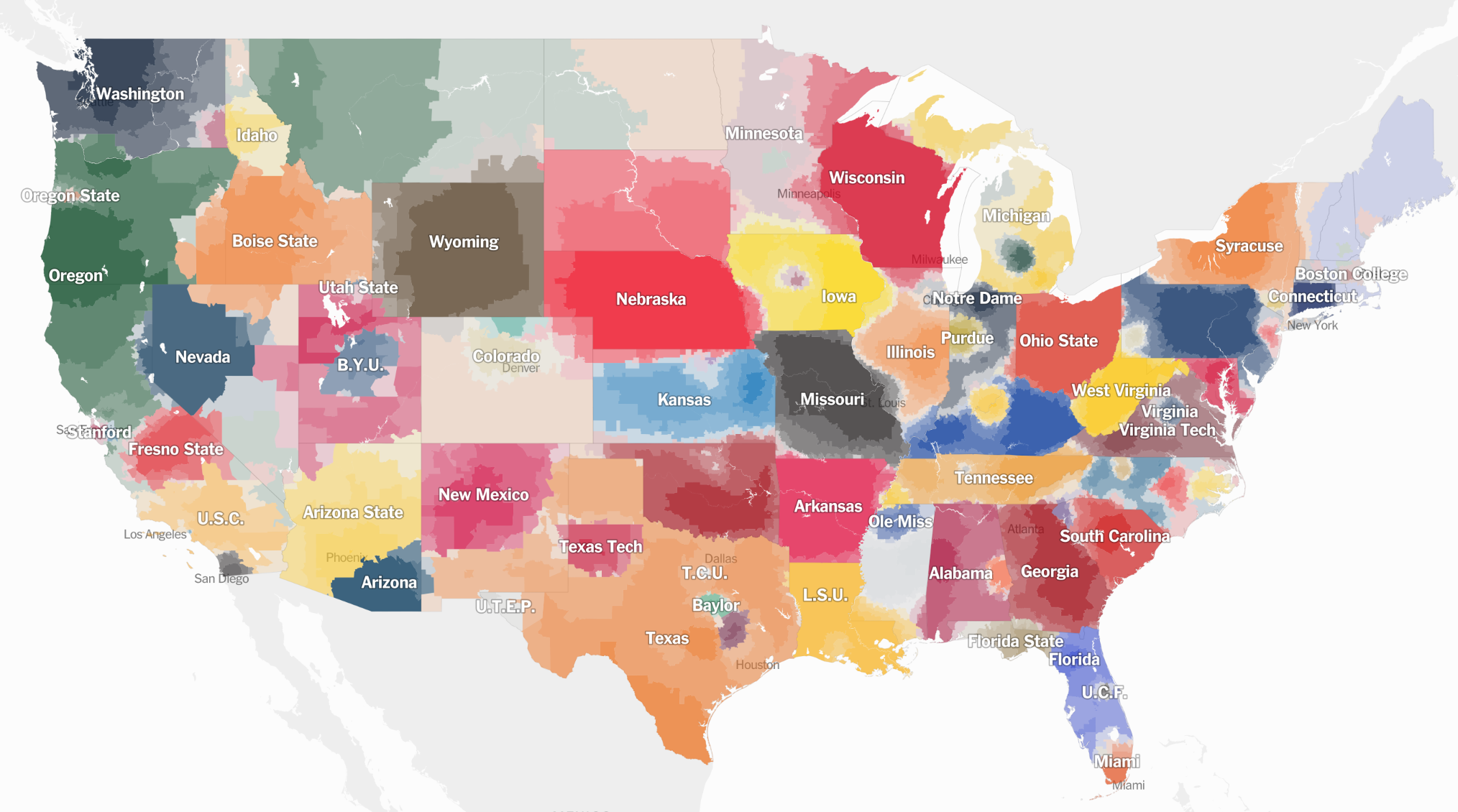 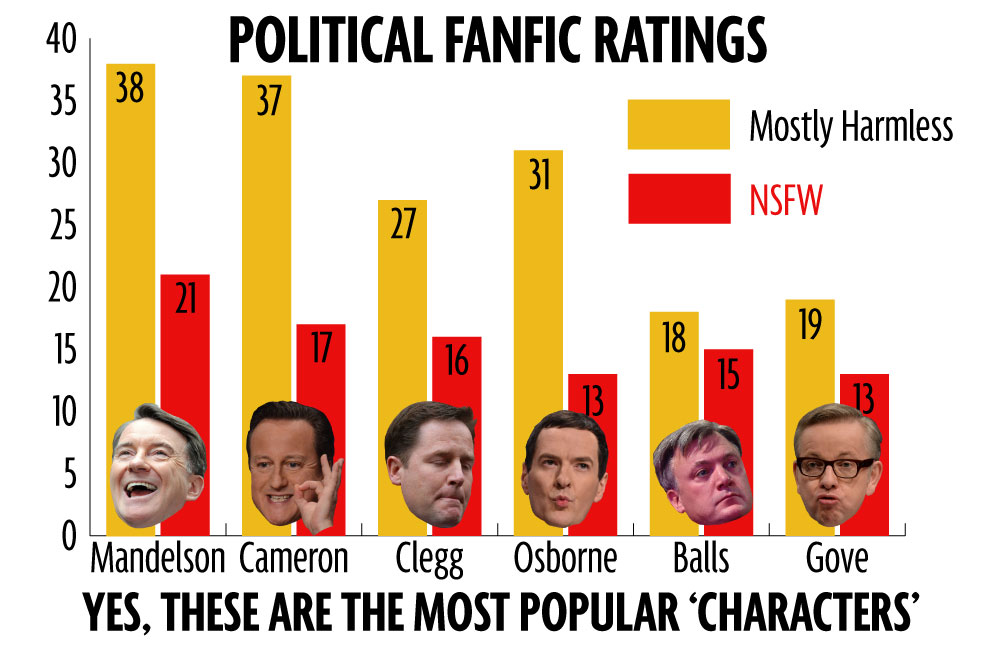 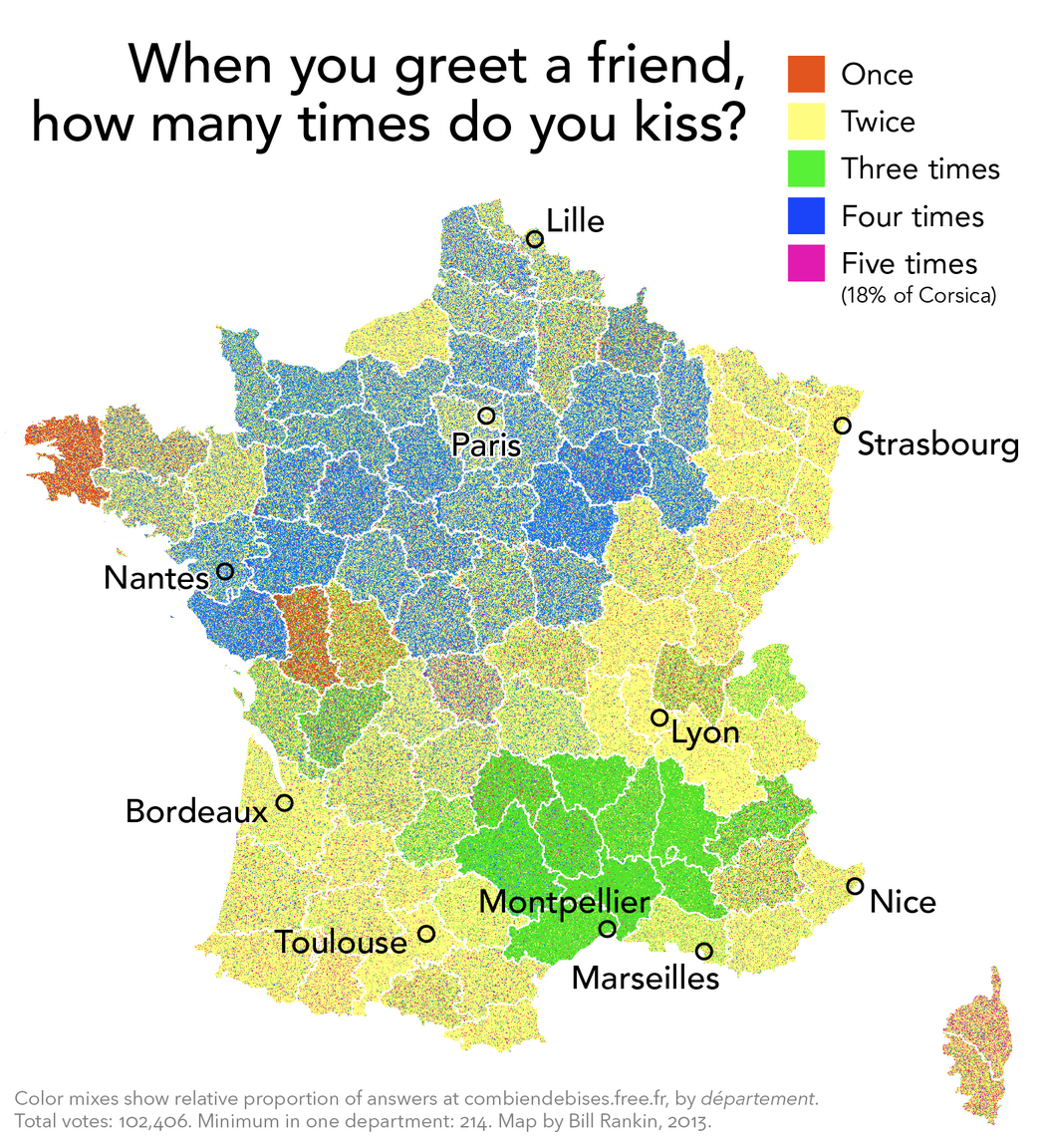 Mapping french kisses: When you ask a French person how many times she might “faire la bise” (kiss in greeting), the answer will differ depending on where she lives. In the south of France, people are more likely to lean in for three kisses, while in the north they tend to go for two or four. By mapping 104,206 responses to the question, Bill Rankin at Radical Cartography was able to show those geographic patterns. The visualization is from 2013, but there’s still time to add your data to the project.

Solving the traveling salesman problem: This simulation of travel routes by Todd W. Schneider has been around for a couple of weeks, but it wasn’t until Nathan Yau mentioned it that I saw it. Given a list of cities, Schneider’s interactive map finds the “shortest possible route that visits each city exactly once and returns to the origin city” — just what a traveling salesman would want. Of course, there aren’t too many traveling salesmen left in the United States, but if you’re curious about how to move between, say, 48 state capitals, then it’s worth taking a look. Schneider used a technique called “annealing” to work out the quickest way around the country without having to check each and every possible path — there’s a very technical but nevertheless interesting explainer of how he did it here. 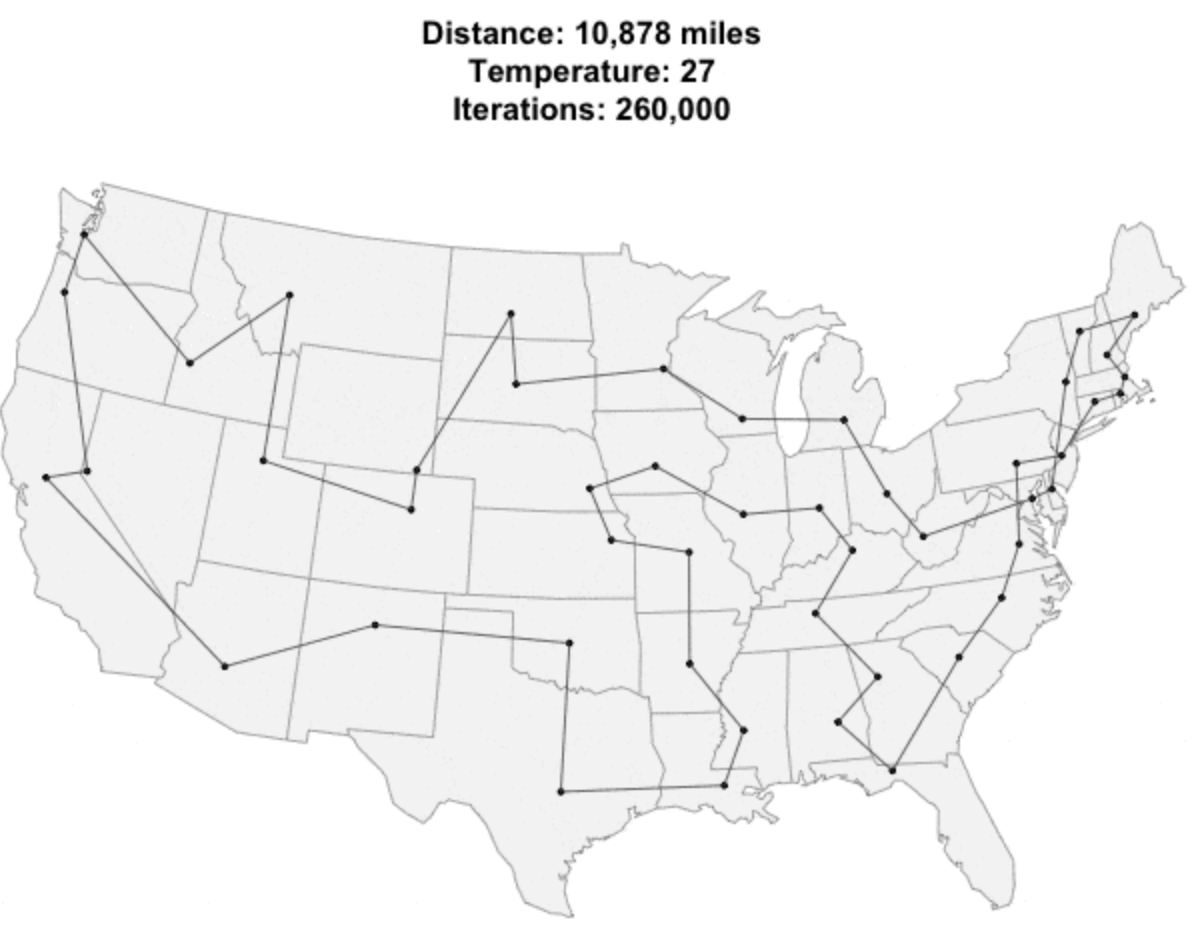