When FiveThirtyEight launched its Senate forecast almost a month ago, Democratic Sen. Kay Hagan had just a 46 percent chance of winning re-election in North Carolina. Her chance of winning now stands at 80 percent. On Tuesday, a National Research survey in the Tar Heel State put Hagan up 46 percent to 41 percent over Republican Thom Tillis — the 10th consecutive non-campaign sponsored survey to give her a lead.

But North Carolina is the exception. While some political observers have gleaned signs of Republican momentum in the overall Senate picture, the truth is little has changed since our first Senate forecast.

We currently peg the chance of a GOP takeover at 58 percent. Republicans have bounced around between a 53 percent and a 65 percent chance of winning back control. 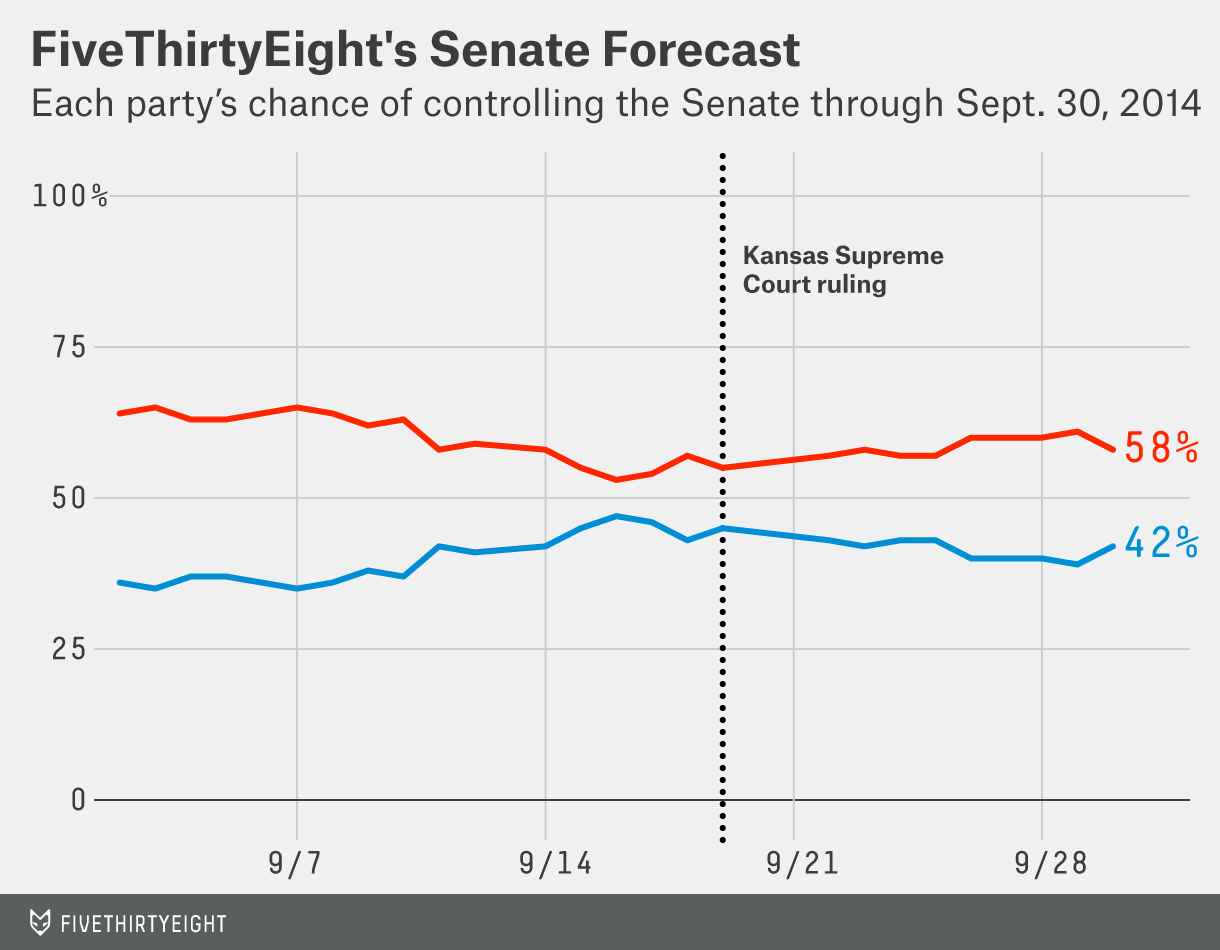 Democrats started to make a move around Sept. 10, when polling showed Hagan building support. You can also see a separate mini-spike for Democrats about a week later, when the Kansas Supreme Court ruled that Democrat Chad Taylor, who had dropped out of the Senate race there, could take his name off the ballot. That decision left a two-way race between Republican Sen. Pat Roberts and independent Greg Orman. That helped Orman, who is a 58 percent favorite. Indeed, Kansas is the only state besides North Carolina in which the Republican’s chance of winning has changed by more than 15 percent.

In the past few weeks, Republicans have gained back some of the ground they lost with the Hagan surge and the Taylor news. Republican Cory Gardner has led in the four most recent polls released in Colorado, after trailing in the previous seven surveys. And the picture in Alaska has become somewhat clearer; Republican Dan Sullivan has led in the three non-sponsored surveys taken since the middle of the month.

Otherwise, not much has changed. The average state has shifted by only 4.5 percentage points since the beginning of the month. Even that movement is mostly due to the changes in Kansas and North Carolina. The median shift has been just 1.1 percentage points. That means the forecasts in half of the races have shifted by about a percentage point or less.

And as you might expect given the overall picture, the movement in individual states hasn’t been in one direction. We’ve seen an average shift of 1.7 percentage points in the Democrat’s favor. The median shift has been 0.2 percentage points toward the GOP.

Overall, there has been a lot of noise, but the signal has remained mostly steady. Republicans are ahead — by a few hairs.