The perception after the NFL’s fourth week of play is that parity reigns supreme. Only two teams, the Arizona Cardinals and Cincinnati Bengals, remain undefeated — and they’re both 3-0 rather than 4-0, having had a bye last week. No one else seems to have much momentum. Consider the Atlanta Falcons, who crushed the Tampa Bay Buccaneers 56-14 two Thursdays ago in one of the most dominant single-game performances in NFL history. Last week, the Falcons lost by 13 points to the Minnesota Vikings. The Buccaneers? They upset the Pittsburgh Steelers, who were coming off a big win against the Carolina Panthers.

Here’s the thing: All of this is pretty normal. Parity exerts a profound gravitational pull on the NFL. It’s a league of short careers, hard salary caps and redistributive schedules that punish winning teams. Its season is just 16 games. There’s always a lot of parity in the league.

The question is whether there’s more than usual, and as best as I can tell, the answer is no. One way to evaluate this is through FiveThirtyEight’s NFL Elo ratings. (For the methodology, see here.) We can look at the standard deviation of each team’s Elo ratings through the first four weeks of the season. The higher it is, the less parity.

Some of the perceived parity in Week 4 is because a number of the best teams were out of action, including the Bengals, Cardinals, Seattle Seahawks and Denver Broncos.

Meanwhile, there are at least two really terrible teams in the NFL, and terrible teams count as much as great ones when measuring standard deviation. The Oakland Raiders squandered one of their better opportunities to pick up a win in a London game against the Miami Dolphins last week and now project to win only 2.4 games, according to the Elo simulations. That’s in part because of a tough schedule. (The Raiders have about a 10 percent chance of going 0-16.) The Jacksonville Jaguars have a more forgiving schedule, but they’re worse than the Raiders, according to Elo.

We haven’t, however, seen much turnover in which teams might be considered great, average or poor. Before the season began — based on their Elo ratings at the end of 2013 — Elo’s top 10 teams were, in order, the Seahawks, San Francisco 49ers, Broncos, New England Patriots, Panthers, New Orleans Saints, Bengals, San Diego Chargers, Cardinals and Indianapolis Colts.

Are any of those teams clearly outside of the top 10 now? Only the Panthers and Saints have fallen out of the Elo top 10; they rank at No. 14 and 15, respectively. You could also make a case for the Patriots after their disastrous performance Monday night. But if there’s anything Week 4 demonstrated, it’s that one game may not tell us much.

Meanwhile, the worst 10 teams at the start of the year were — from the bottom up — the Jaguars, Raiders, Houston Texans, Cleveland Browns, Washington Redskins, Buccaneers, Buffalo Bills, Falcons, New York Jets and Tennessee Titans. Nine of those teams remain in the bottom 10. The exception is Atlanta, which has climbed to 22nd place.

We’ve seen more reshuffling in the middle tier of teams. The Dallas Cowboys are the biggest gainers so far on the season, having added 61 Elo points. Still, the Cowboys’ schedule has been easy, and Elo will need to see more from them before it concludes they’re anything beyond slightly above average. The same might be said for the Detroit Lions, who are the next-biggest gainers, with 54 Elo points added.

But if the early games have not done much to contradict preseason expectations, they have had a pronounced impact on playoff odds. A 10-6 team almost always makes the playoffs, an 8-8 team almost never does and a 9-7 team does about half the time. A “bad” or unlucky or uncharacteristic loss still matters a great deal whether it comes in Week 4 or Week 17. So, which teams have dug themselves the biggest holes, and which have more slack? 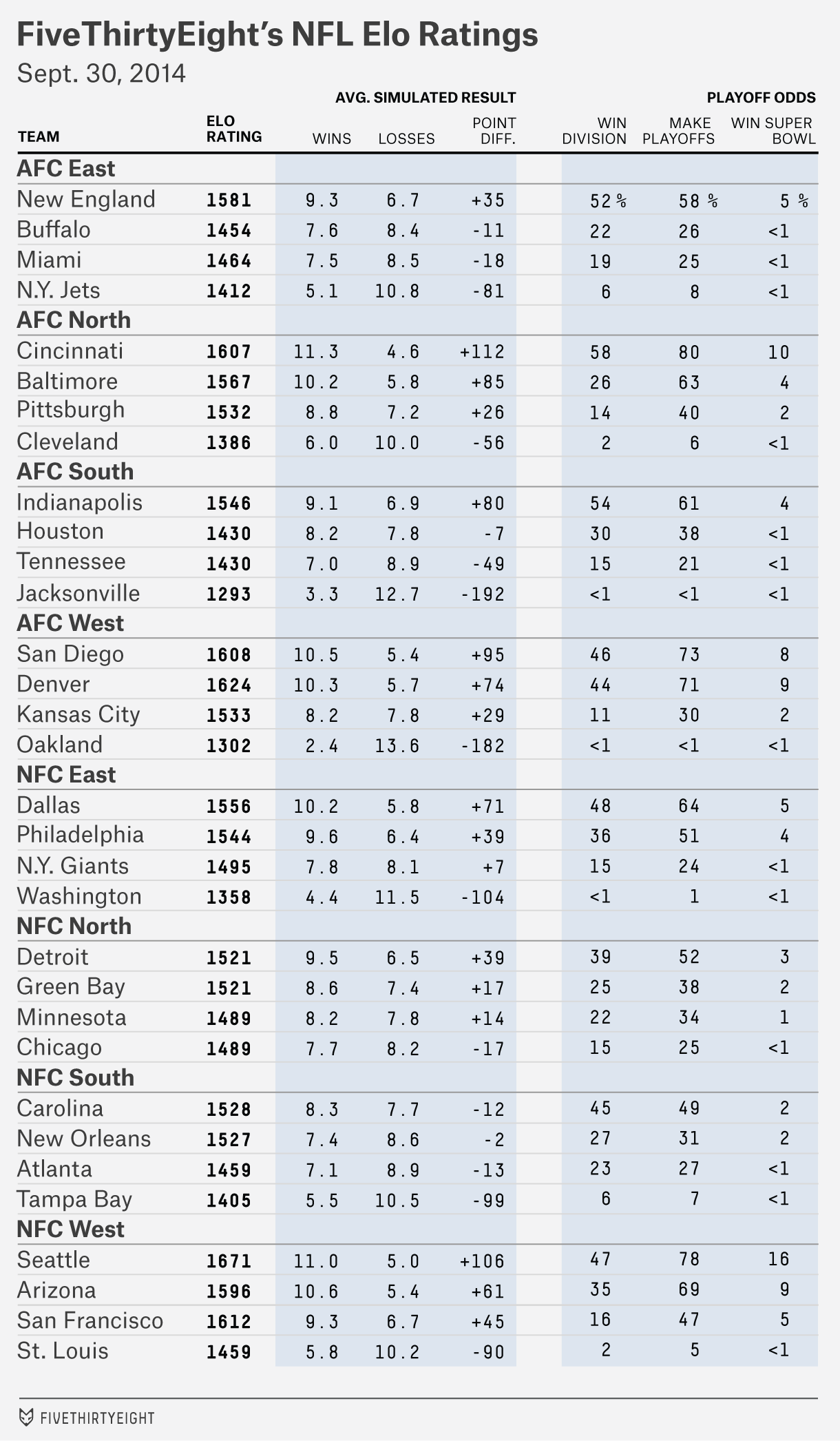 The Patriots, despite their loss in Kansas City, are still more likely than not to make the playoffs. There are three major reasons for this: The Bills, Dolphins and Jets, the other teams in the AFC East. The Jets project to just a 5-11 record. Buffalo and Miami are better, but with each team at 2-2, Elo is still putting its money on a diminished version of Tom Brady rather than a team with an actual quarterback controversy.

The Saints, 1-3 after a loss in Dallas, have seen their playoff chances fall more than any other team since the start of the season (they’ve dropped from 56 percent to 30 percent). Still, New Orleans got a reprieve because division rivals Carolina and Atlanta also lost last week. Every team in the NFC South now projects to finish the season with a negative point differential, and none projects to win more than 8.3 games. That means New Orleans can recover with a merely good — rather than extraordinary — performance. In our simulations, the Saints made the playoffs about 60 percent of the time when they finished 9-7, and almost 25 percent of the time when they went 8-8.

The 49ers, on the other hand, still have their work cut out for them despite having secured a victory against Philadelphia last week and ranking third overall in the Elo ratings. They play in the NFC West, by far the NFL’s toughest division. In our simulations, a 9-7 record won San Francisco the NFC West only 1 percent of the time (although it was occasionally good enough to back the Niners into a wild card). The 49ers’ playoff chances improved, but only to 47 percent, from 40 percent a week ago.

The loss hurt the Eagles more than the win helped San Francisco; Philadelphia’s playoff chances fell from 65 percent to 51 percent, in part because Dallas (now the divisional favorite) and the New York Giants won.

The NFC North, meanwhile, has parity befitting the NFL’s old Norris Division: All four teams have an Elo rating between 1489 and 1521. But the Lions have three wins when everyone else has two, and that makes them the best bet to make the playoffs.

Elo ratings can also be used to project point spreads. Since the start of the season, we’ve been recommending that you don’t bet on them, and we hope you’ve heeded that advice. They went 5-7-1 against closing betting lines in Week 4 and are 25-33-2 overall on the season. (As an aside, the Elo point spreads would have had you take Miami over Oakland against the point spread last week if we’d realized the game was in England instead of California. But that wasn’t the forecast we published, so we’ll take the loss.) On the positive side, Elo’s picks are 41-20 straight up this year, including a 10-3 performance in Week 4. 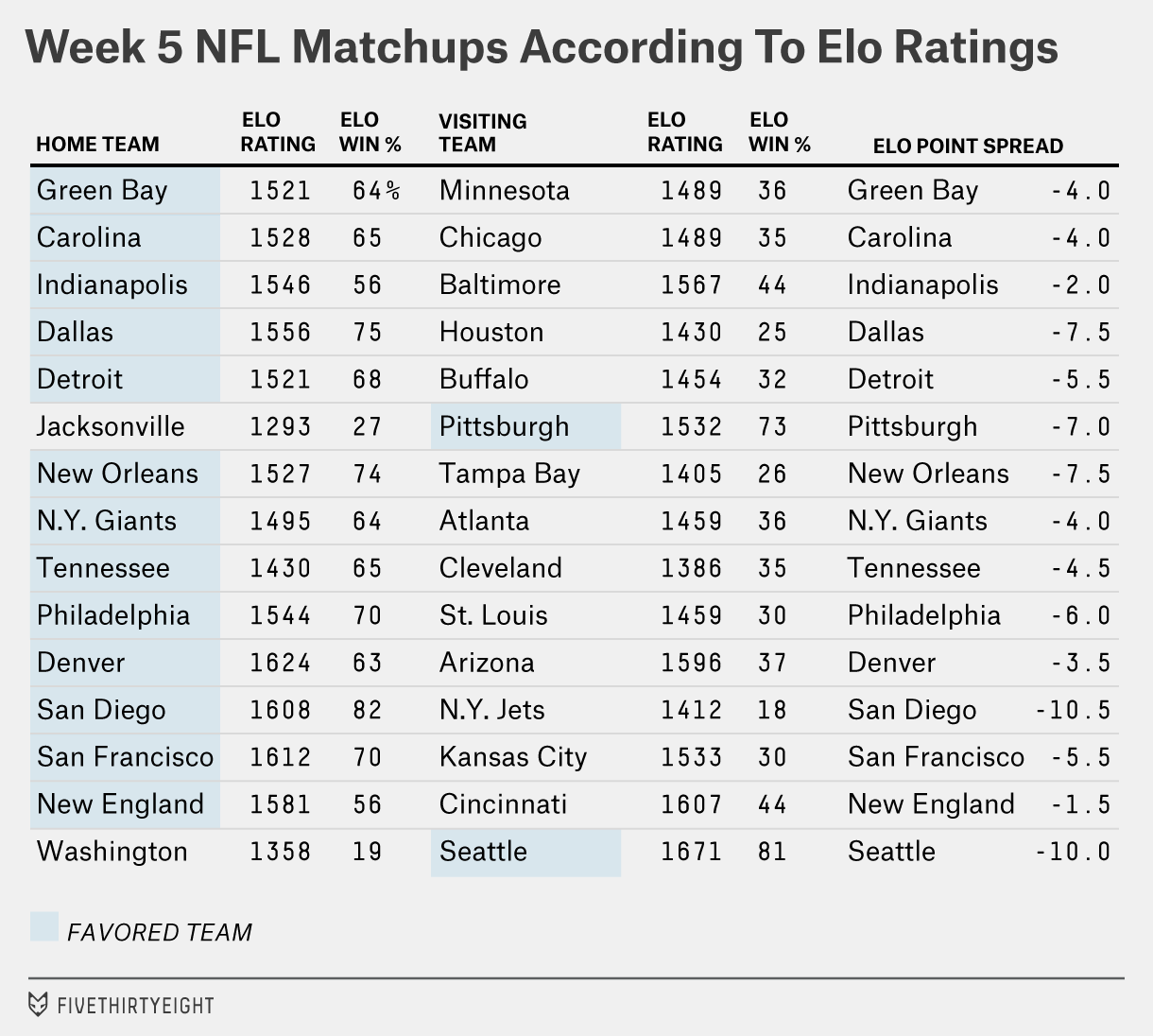 In contrast to Week 4, when there were a number of “pick ’em” games, Week 5 features some easier calls, in part because the stronger teams tend to be playing at home. Straight-up (not against the point spread), Elo would have you take the home team in 13 of 15 games. The exceptions are clear: No home-field advantage would be enough to make Washington favored over Seattle, or Jacksonville over Pittsburgh.

Compared against early Vegas point spreads, there are several cases with a discrepancy of at least a field goal. Against the point spreads, Elo would have you bet on the Chargers and Cowboys and against the Packers, Saints and Broncos. But to reiterate, we don’t recommend that you do this. I have nothing against gambling; I have something against losing money.