The job market has been getting so much better for so long that it’s reasonable to start asking whether it has at last fully healed from the recession that ended six years ago this month. But most of the evidence suggests the answer is still “no.”

U.S. employers added 280,000 jobs in May, the Bureau of Labor Statistics said Friday, the 14th time in 15 months that job growth has topped 200,000. Other numbers in the report were similarly positive: More Americans entered the labor force, hourly earnings rose, and the government revised upward its estimate for job growth in previous months by a combined 32,000 jobs.

The recovery in the job market was so slow for so long that it can be easy to miss how significant a turnaround we’ve experienced in the past year and a half. Since the start of 2014, the economy has added 4.2 million jobs, the unemployment rate has fallen 1.2 percentage points and virtually every other measurement — hiring, layoffs, voluntary quits — has shown significant improvement.

The question, then, is no longer, “Is the job market getting better?” but rather, “How much better can it get?” Economists debate what, exactly, a fully healthy job market looks like, but they agree that zero unemployment isn’t an achievable goal. Many think the unemployment rate can’t get much below 5 percent for a sustained period without triggering inflation.

If they’re right, the U.S. is already getting close to full employment: The unemployment rate stood at 5.5 percent in May, up slightly from April but down from 6.3 percent a year earlier.

Wages: Average earnings rose 8 cents an hour in May and are up 2.3 percent over the past year, significantly faster than the rate of inflation. But over the longer run, wage growth has been weak, and there have been at best cautious signs of acceleration. That suggests that employers still aren’t having trouble finding workers, or at least not so much trouble that they’re being forced to offer them higher pay. 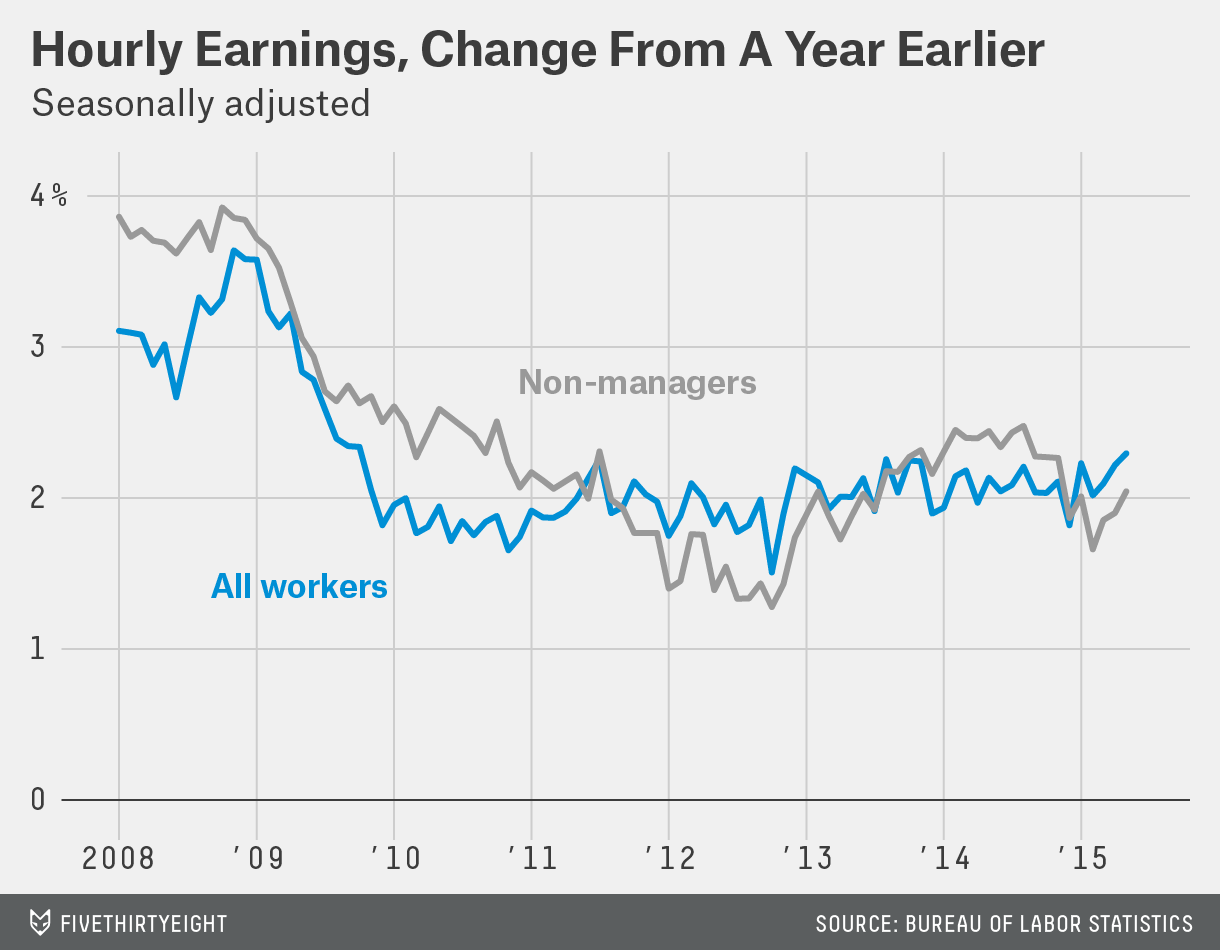 Full-time jobs: In terms of total jobs, the U.S. finally got back to pre-recession employment levels in the middle of last year. But in terms of full-time employment, we’re still waiting. When the recession began in December 2007, there were 121.6 million Americans working full-time (which the government defines as at least 35 hours a week). As of May, there were 121.4 million. Some 6.7 million Americans are stuck working part-time because they can’t find full-time work, a number that’s been falling but remains far above pre-recession levels. 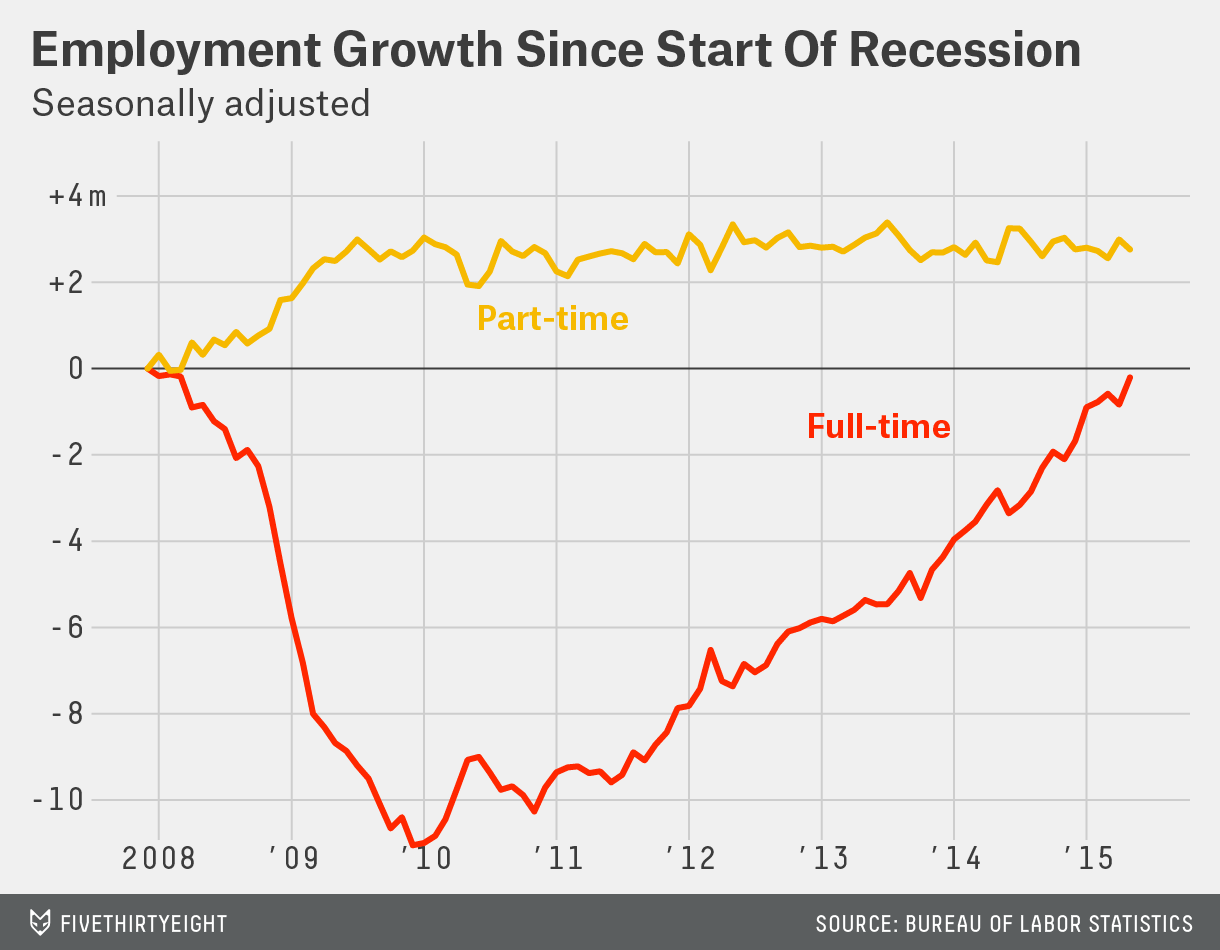 Long-term unemployment: The overall unemployment rate might be getting close to normal, but the crisis of long-term unemployment isn’t close to resolved. More than 2.5 million Americans have been out of work for more than six months, 1.7 million of them for at least a year. Research suggests that many of them may never work again, but the rate at which the long-term jobless have found work has been rising in recent months, suggesting it’s too soon to give up hope. 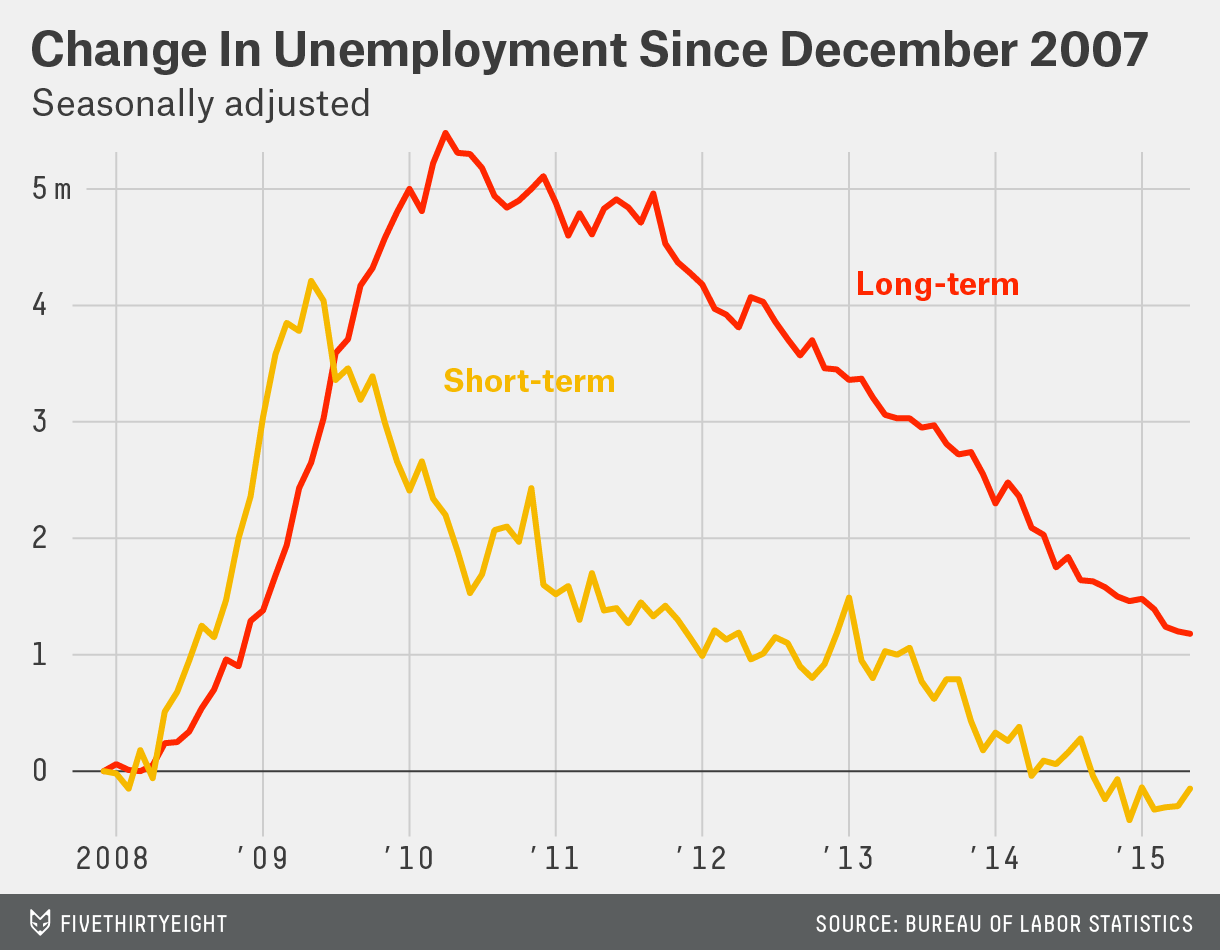 The labor force: The biggest question mark in the “Are we fully healed?” debate is a measurement economists call the labor-force participation rate: the share of adults who are either working or actively looking for work. It sank like a stone during the recession and the early part of the recovery, and it’s barely rebounded since. 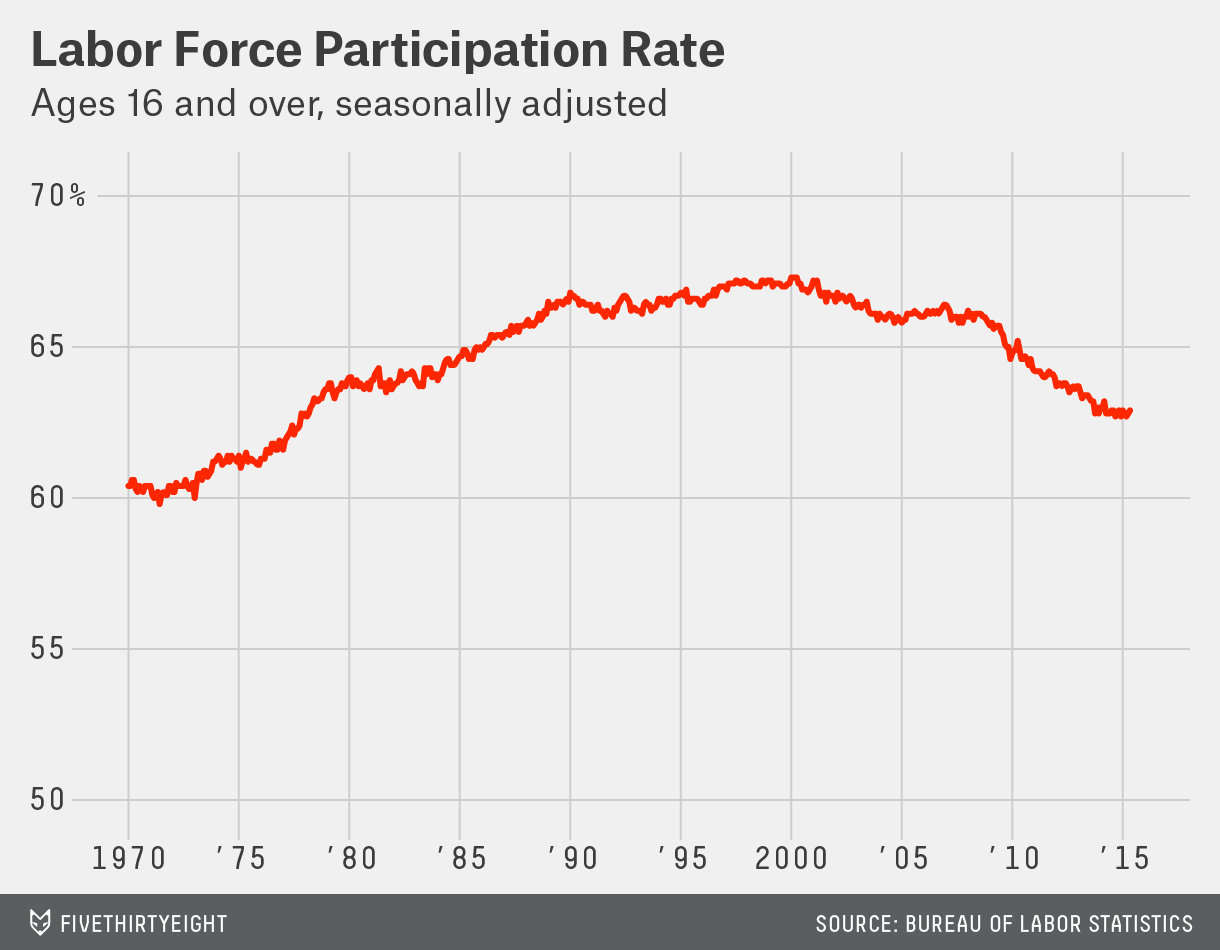 A big part of the decline in the participation rate was the aging of the baby-boom generation — as boomers retire, they leave the labor force, pushing down the overall rate. But that isn’t the whole story. Millions of people left the labor force during the recession because they couldn’t find work. The question now is whether they’ll come back. If they do, then there would be a big pool of workers out there waiting to find jobs, and the job market still has plenty of room for improvement. If they don’t — if the people who stopped looking have left the labor force for good — then the U.S. could be getting close to full employment.

That question is a matter of tremendous debate among economists. But there’s reason to believe that at least some of those who left the labor force will return as the job market improves. For one thing, there are still more than half a million “discouraged” workers — people who say they aren’t looking for jobs because they don’t think they can find one. For another, the employment rate among Americans in the prime of their working lives — those between the ages of 25 and 54 — has been rising, although those gains have stalled out in 2015. May’s report brought some good news: The labor force grew by nearly 400,000 workers as people joined or re-entered the job hunt. 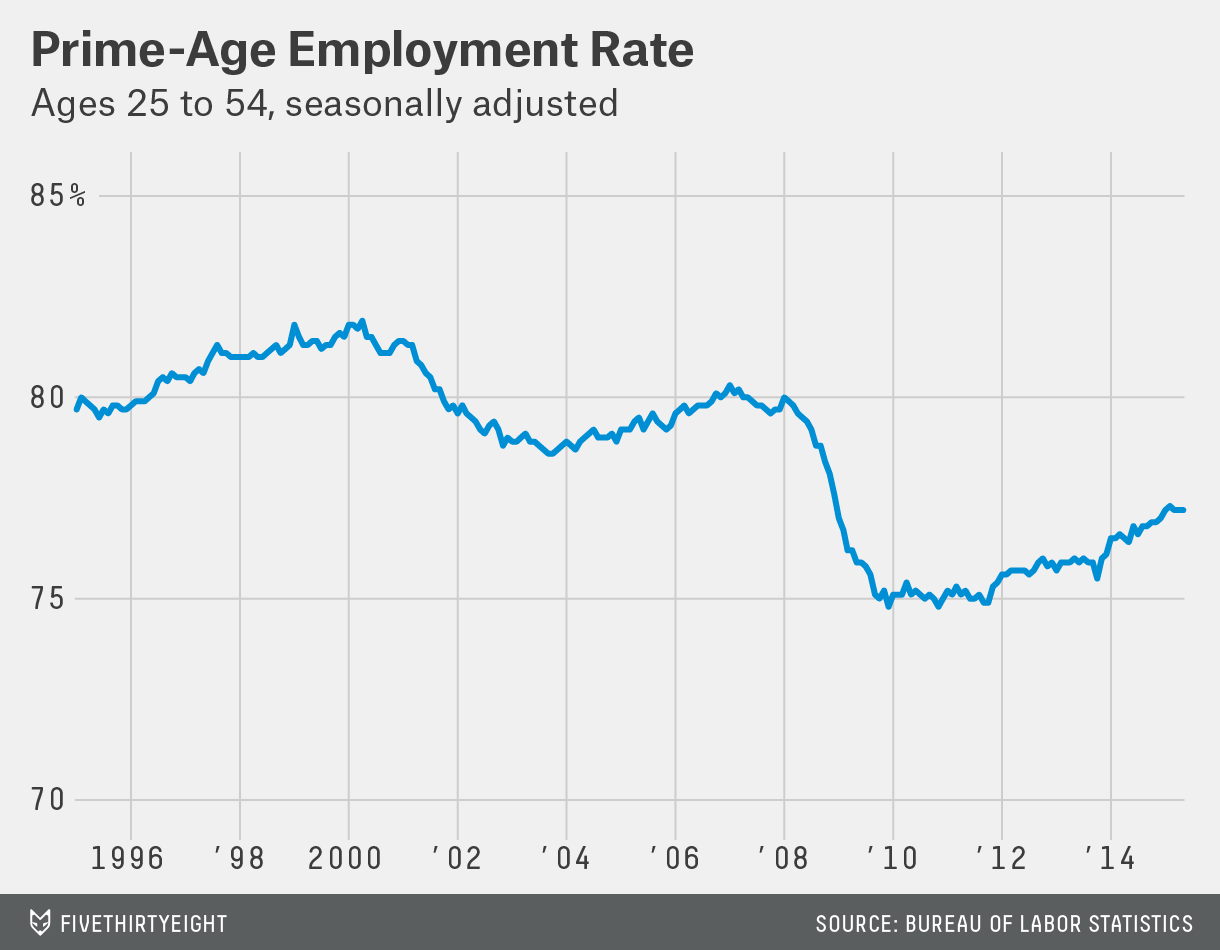