The U.S. economy added 252,000 jobs in December, the Bureau of Labor Statistics said Friday. That’s the 11th month in a row that job growth topped 200,000, the first time that has happened since the mid-1990s. For the full year, employers added nearly 3 million jobs, making it the best year since 1999. And the unemployment rate dipped to 5.6 percent, the lowest it has been since June 2008. 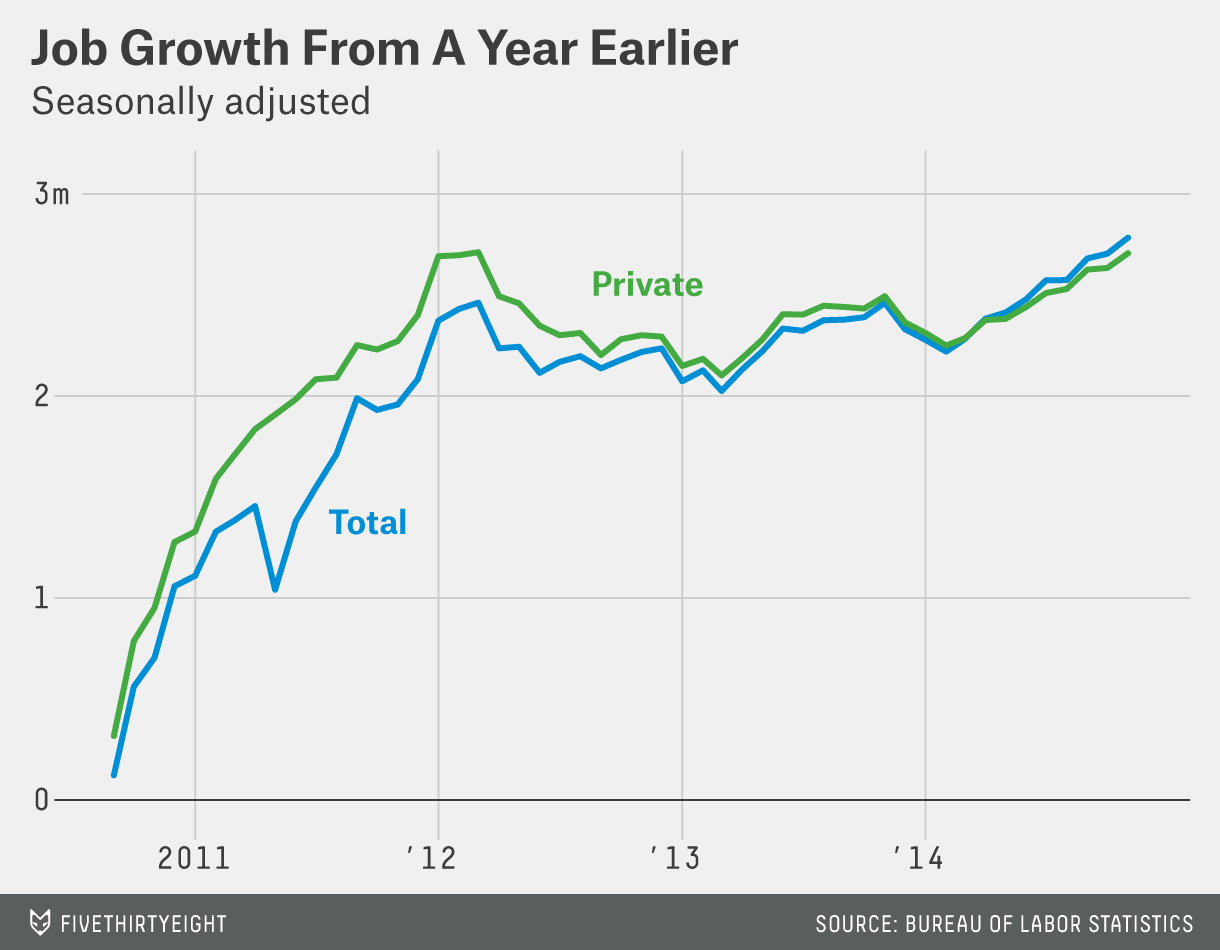 But accelerating job growth isn’t translating into wage gains for most workers. Average hourly pay fell in December, and while that may be little more than statistical noise — there was an unusually big jump up in November — the overall trend hasn’t been much better. Average wages are up just 40 cents an hour over the past year, and growth shows no hint of picking up. 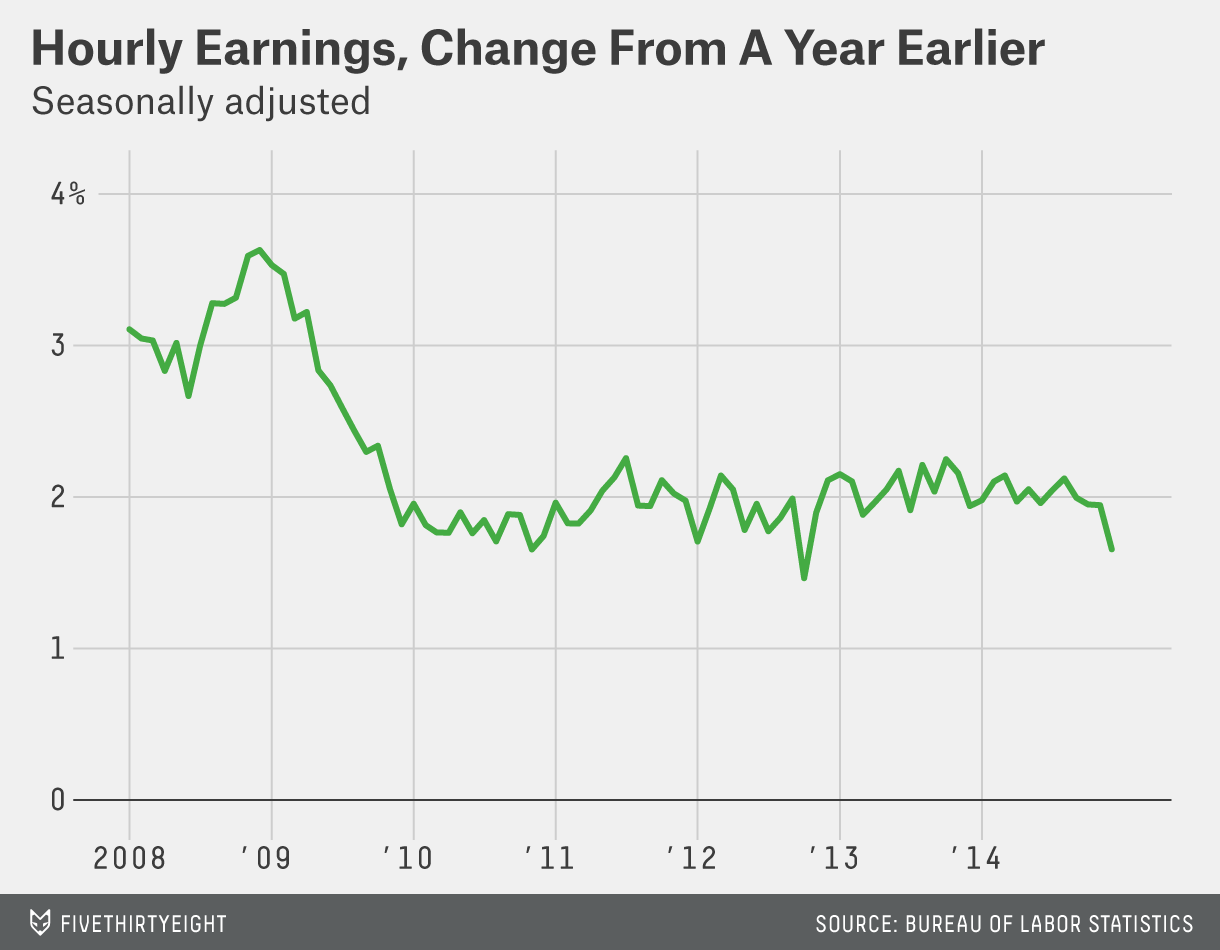 In the short term, the weakness in wage growth is being at least partly offset by tumbling energy prices, which will put money in consumers’ pockets and help keep inflation low. But over the longer term, the trend is concerning.

Last week, I wrote that 2015 is shaping up as a test of the recovery. If economic growth continues at its recent pace and the unemployment rate keeps falling, we should start to see the progress reflected in workers’ paychecks. If we don’t, that’s a sign there are deeper problems in the economy.

Friday’s numbers are from 2014, so that test hasn’t begun. It’s possible that the economy is poised for a breakout in 2015 and we just don’t know it. Average wages are a blunt measure, lumping together everyone from CEOs to fast-food workers, so it can be hard to pick up trends bubbling beneath the surface. There are at least a few individual sectors in which earnings are rising faster.

But after five years of dashed expectations, it’s probably wise to stay in a “show me” mind-set. The economy finally showed us job growth in 2014. For wages, though, we’ll have to wait to see what 2015 reveals.

Here are a few other notes from Friday’s jobs report.

Positive revisions: Last month, I wrote that November’s jobs report “crushed it.” It turns out it was even better than we knew at the time. The government revised up its estimate for October and November job growth by a combined 50,000 jobs. That’s particularly good news because November looked a bit like an outlier when the report first came out — some economists expected a downward revision. Compared with November’s 353,000 jobs, December’s total looks fairly tame. But what’s important here is the trend, and there’s no question that hiring picked up over the year. 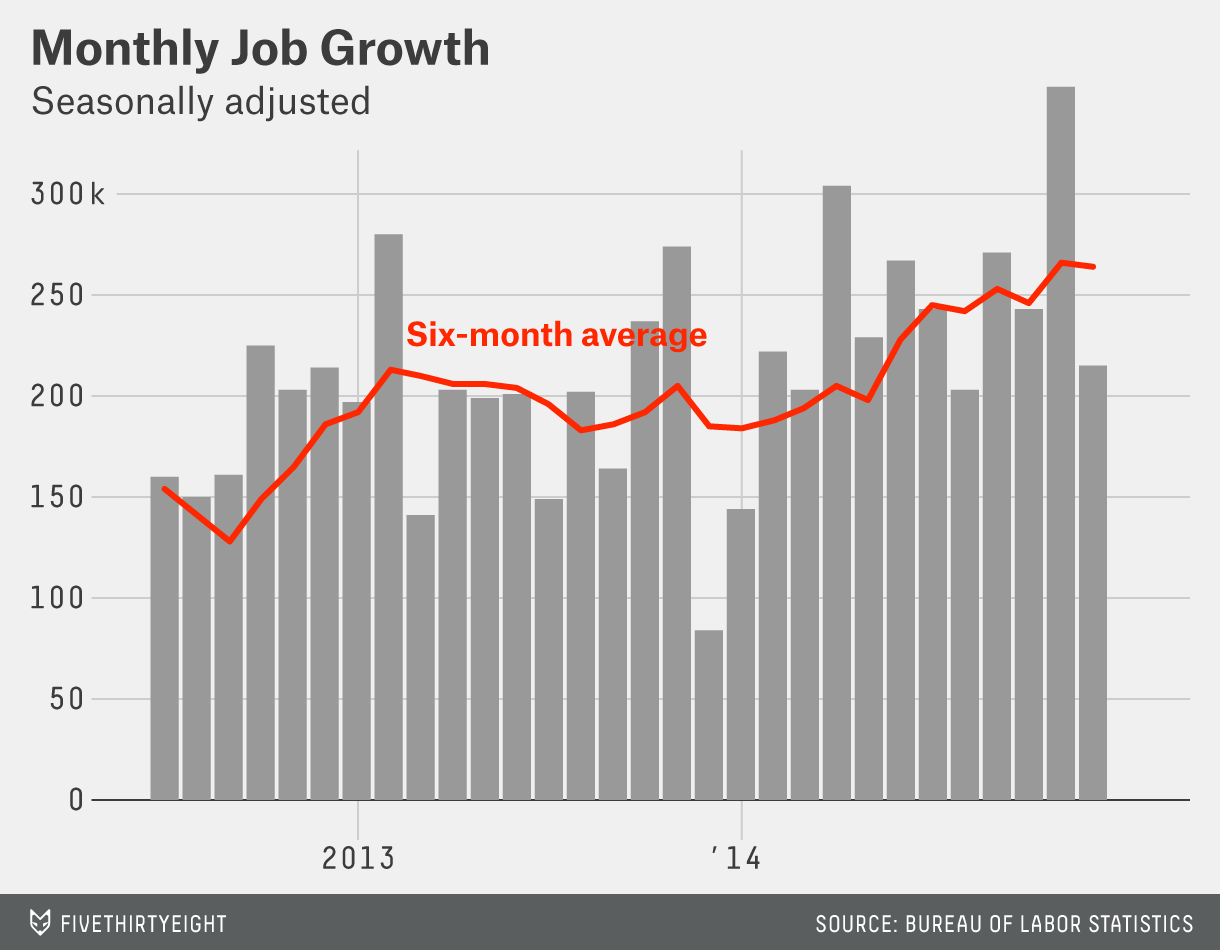 Good jobs: Despite anemic wage growth, the quality of the jobs being created appears to be improving. December’s job growth was broad-based, hitting well-paying sectors like construction and manufacturing, as well as lower-paying ones like restaurants and retail. Moreover, most of the jobs being created are full time, and fewer people are stuck working part time because they can’t find full-time work. 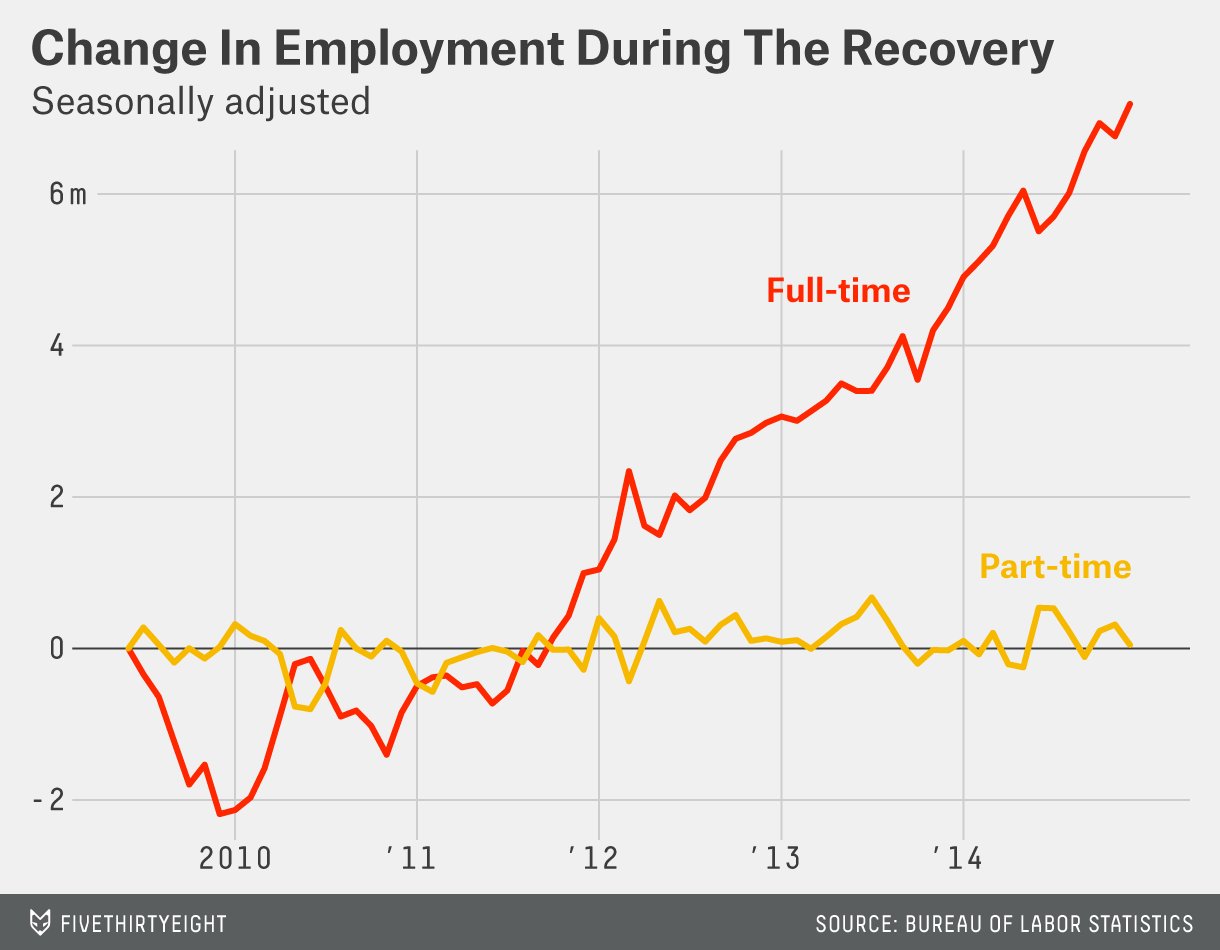 Still no recovery in participation: One major question for the economy in 2015 will be whether Americans who left the labor force during the recession begin to return now that the economy is improving. So far, there’s no sign of that happening. The share of adults working or actively looking for work, a measure known as the participation rate, ticked down in December and has been essentially flat since spring. The number of unemployed workers re-entering the labor force fell in December, and the share of the population that is employed remained flat.

It’s hard to know how to interpret the monthly figures. The retirement of the baby boom generation is putting downward pressure on the participation rate, as are other long-term trends. As a result, many economists argue that even a good economy won’t do much more than hold the participation rate steady. But even among so-called prime-age workers, those between ages 25 and 54, there hasn’t been a rebound in participation. 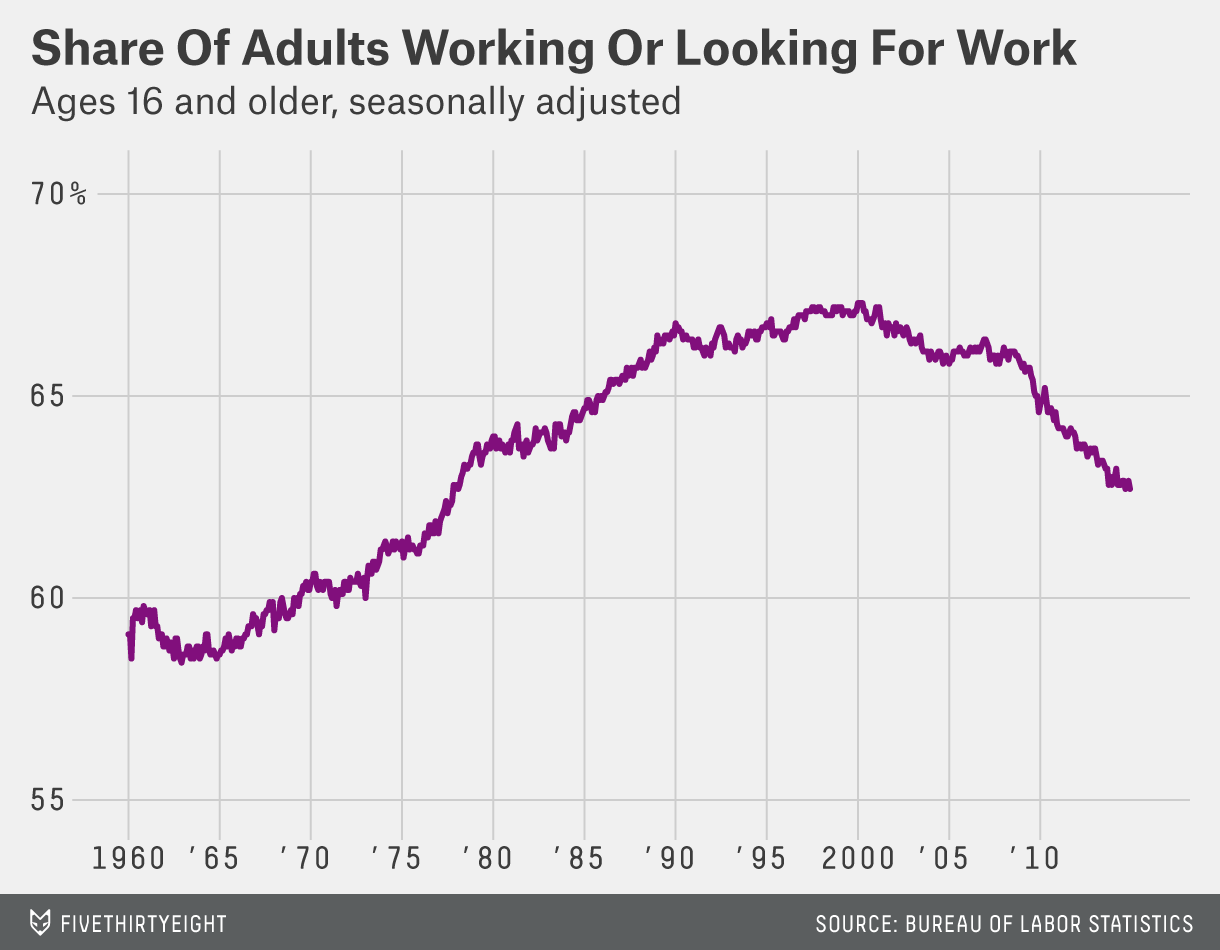 Good news for the unemployed: Nearly a quarter of unemployed workers found jobs in December, a significant improvement over a year earlier when just 20 percent did so. Job seekers are now roughly as likely to find work as to stop looking, a clear shift from earlier in the recovery. There are even signs that progress is at last reaching the long-term unemployed. The number of Americans out of work more than six months is down 28 percent from a year ago and is at its lowest level since 2009. Preliminary evidence, at least, suggests they’re finding jobs, not just dropping out of the labor force. 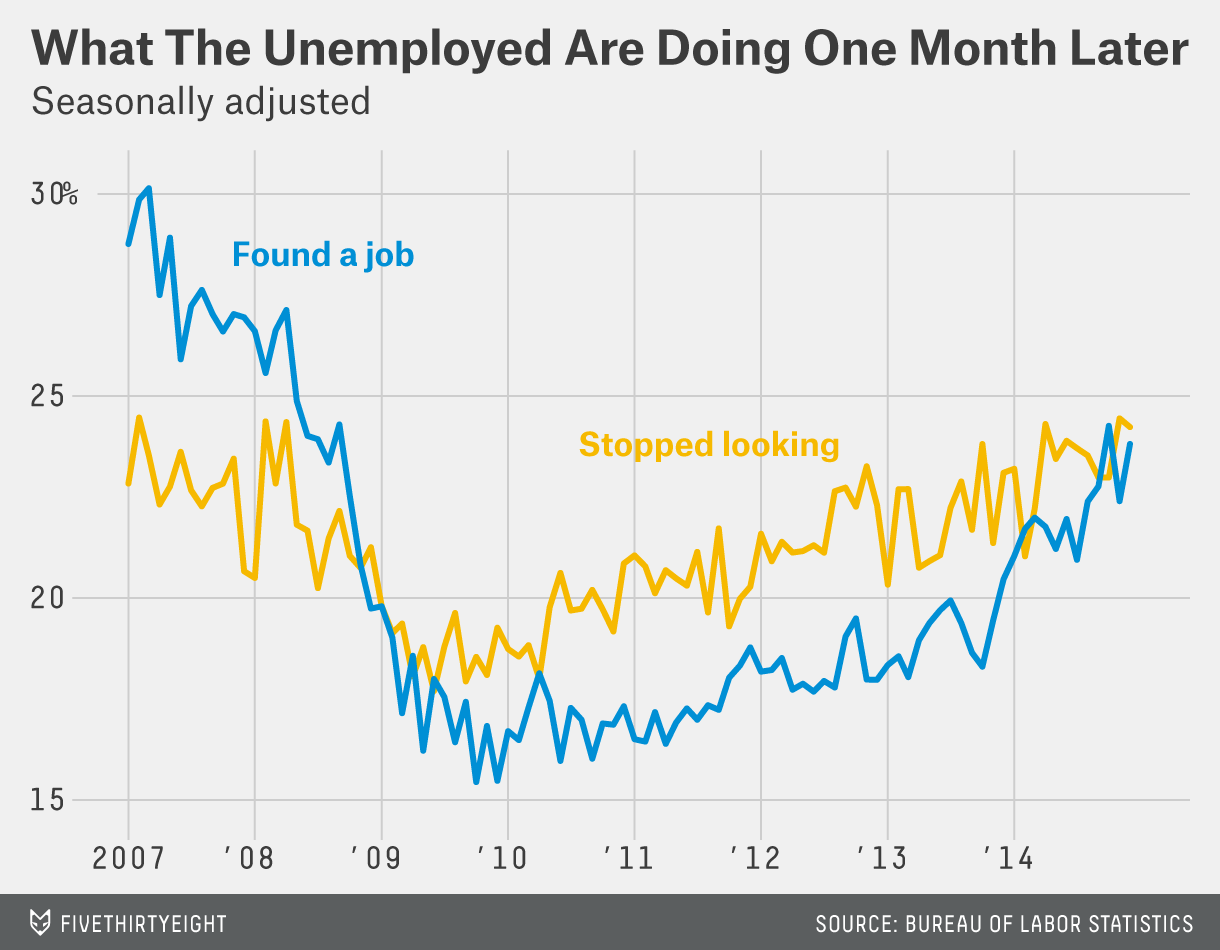