Every January since the recession ended in 2009, economists have predicted that this was the year the recovery would take off. In 2014, they were finally right.

The year didn’t get off to a good start. Gross domestic product, the broadest measure of economic output, shrank in the first three months of the year, something that’s rare outside of recessions. But most economists chalked up the weak numbers to the brutal winter storms that swept across much of the country. This time, at least, it looks like they were right: Once the weather warmed up, so did the economy. 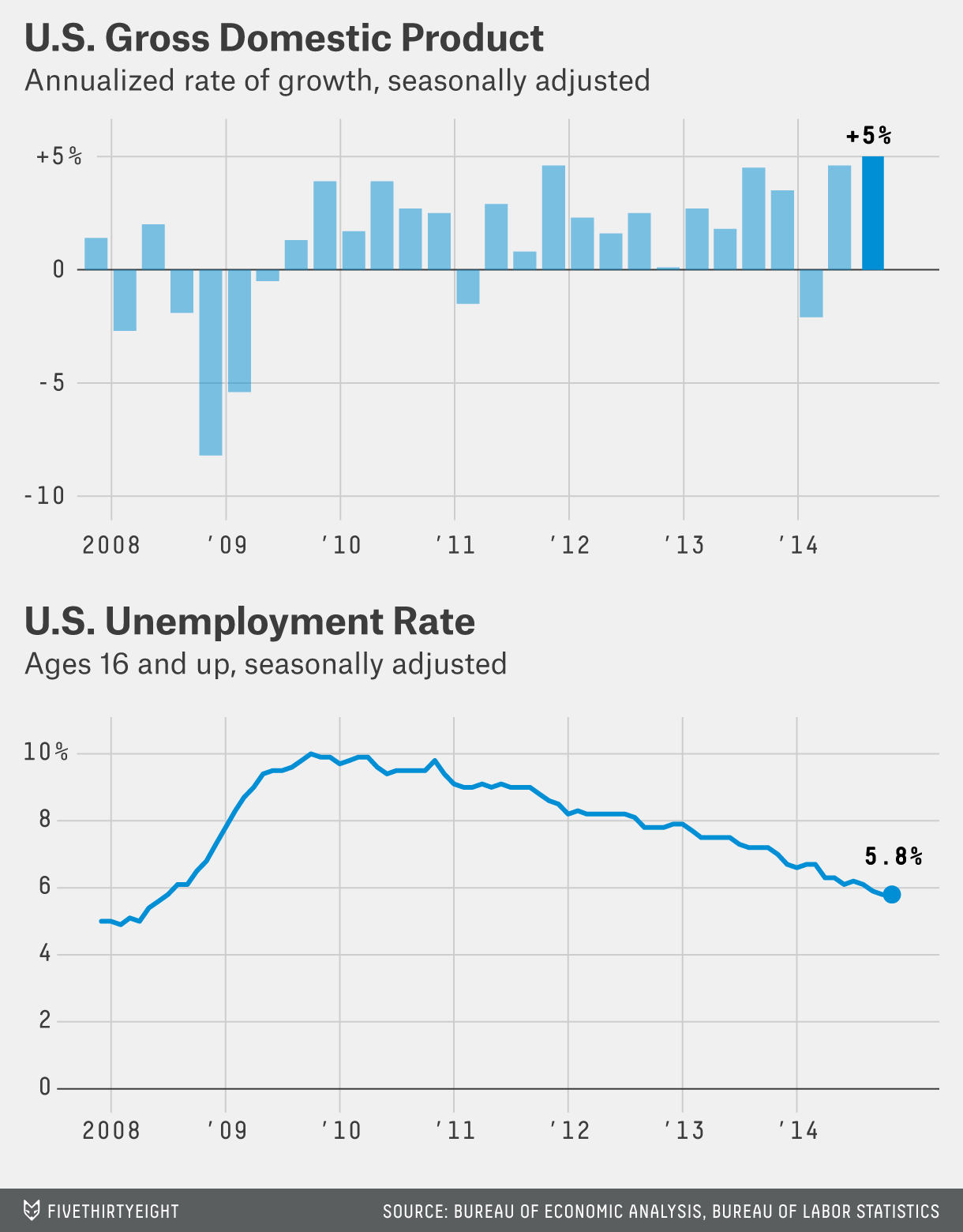 By pretty much any measure, the last nine months have been the best of the recovery. Employers added an average of 260,000 jobs per month between April and November, and most economists expect another strong showing in December. The unemployment rate dipped below 6 percent in September and has continued to fall. Consumer spending is up, the housing market is improving and Americans are starting to feel better about their economic prospects. Barring a huge surprise when the next set of numbers is released in January, gross domestic product should show its third straight quarter of strong growth.

The troubling reality, however, is that a large swath of Americans haven’t yet reaped the benefits of that recovery. Household income was basically flat in 2013, and anemic wage growth means it’s unlikely 2014 was dramatically better. The rising stock market has helped the affluent regain the wealth they lost in the financial crisis, but it hasn’t done much for everyone else. Americans in their mid-20s haven’t experienced a healthy job market in their adult lives — their unemployment rate remains in the double digits.

There are, broadly speaking, two explanations for the recovery’s failure to reach the middle and working classes. One is that it just hasn’t yet been strong enough, but as growth picks up, so will Americans’ fortunes. The other is that there is something more fundamentally wrong with the structure of the U.S. economy that growth alone won’t solve. The new year is shaping up as a test of those two theories. Now that the recovery has taken hold, will it finally reach the many Americans who have been left behind?

There are reasons to be optimistic. In the short term, tumbling prices at the pump should put money in consumers’ pockets, although there’s no way to know how long the relief will last. Perhaps more enduringly, the decline in the unemployment rate has left fewer workers chasing more job openings. In other words, after years in which companies could have their pick of workers at practically any price, the tables may at last be turning. That could force companies to raise wages if they want to attract and retain good employees. 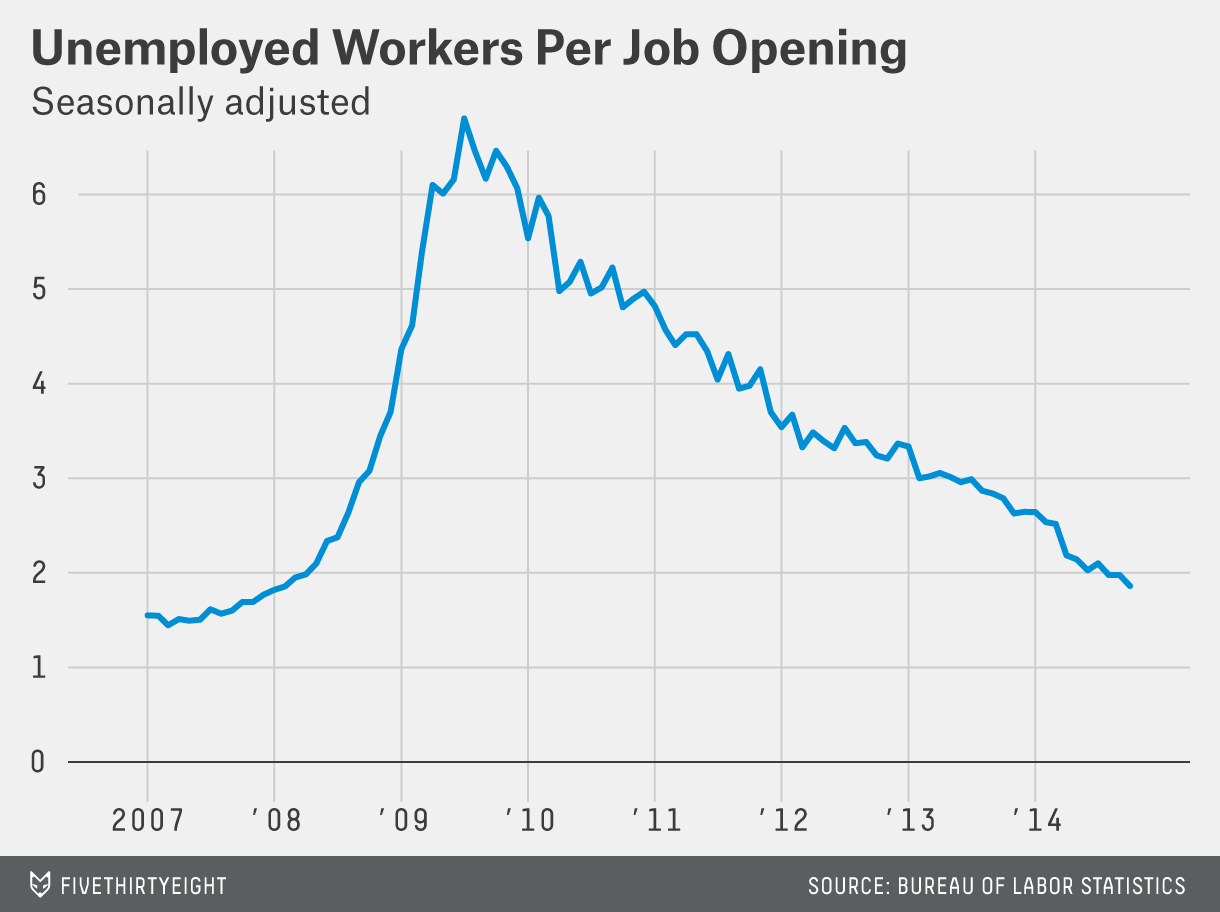 There are hints that could already be happening. Wage growth picked up in November, and while it’s dangerous to read too much into one volatile data point, other indicators have told a similar story. More workers are quitting their jobs, which is an important source of wage growth. Companies are being forced to work harder to fill open positions. If those trends continue in the new year, they should start to push wages upward.

But there are also reasons to be skeptical. There’s no question that the job market is in better shape than it was a year ago, but economists remain divided about just how healthy it is. Millions of Americans left the labor force during the recession and the early stages of the recovery, meaning they aren’t counted in the official unemployment rate. If even a fraction of them decide to return to the job market, they would represent hundreds of thousands of additional job seekers competing for positions and driving down wages. 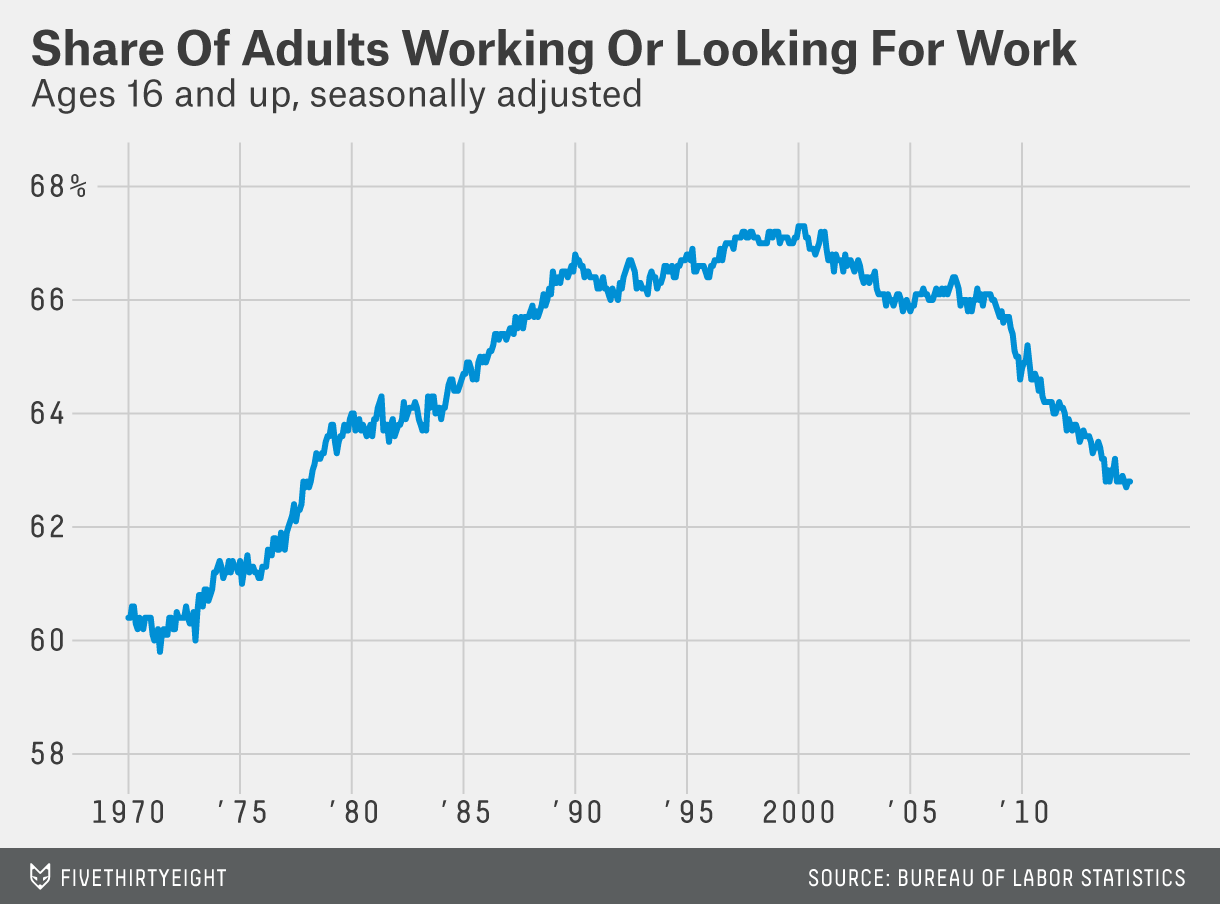 It’s hard to know how many of those workers will start looking for jobs as the labor market improves. Many of them were retiring baby boomers who have left the labor force for good. Others have been out of work so long that they would be unlikely to find work in anything but the strongest of job markets. But more than 2 million Americans have looked for work recently enough that the government considers them “marginally attached” to the labor force, meaning they’re more likely to come back. And nearly 7 million more Americans are working part-time because they can’t find full-time work. Both figures suggest there are many more workers available than the official unemployment rate suggests.

Recent history provides another reason for concern. In the years leading up to the recession, unemployment was low and job growth was strong, yet wage and income growth were still modest for most Americans. Not since the late 1990s has the U.S. economy managed to generate strong income gains for the American middle class, let alone those at the bottom of the earnings totem pole.

Economists don’t agree on the root cause of that weakness. Among the (not mutually exclusive) theories: trade policy, the rise of automation, the decline of unions, tax policy and declining rates of entrepreneurship. All of those issues are what economists call structural problems, meaning they aren’t likely to reverse just because the economy picks up. And there’s certainly little reason to think they have been resolved in the years since the recession.

What’s worse, the recession may have left lasting scars on the U.S. economy. After past downturns, economic growth accelerated to close the gap left by the recession — gross domestic product would return more or less to its prior trend line. That acceleration hasn’t happened this time around, and despite the recent improvement, it looks increasingly unlikely that it ever will. 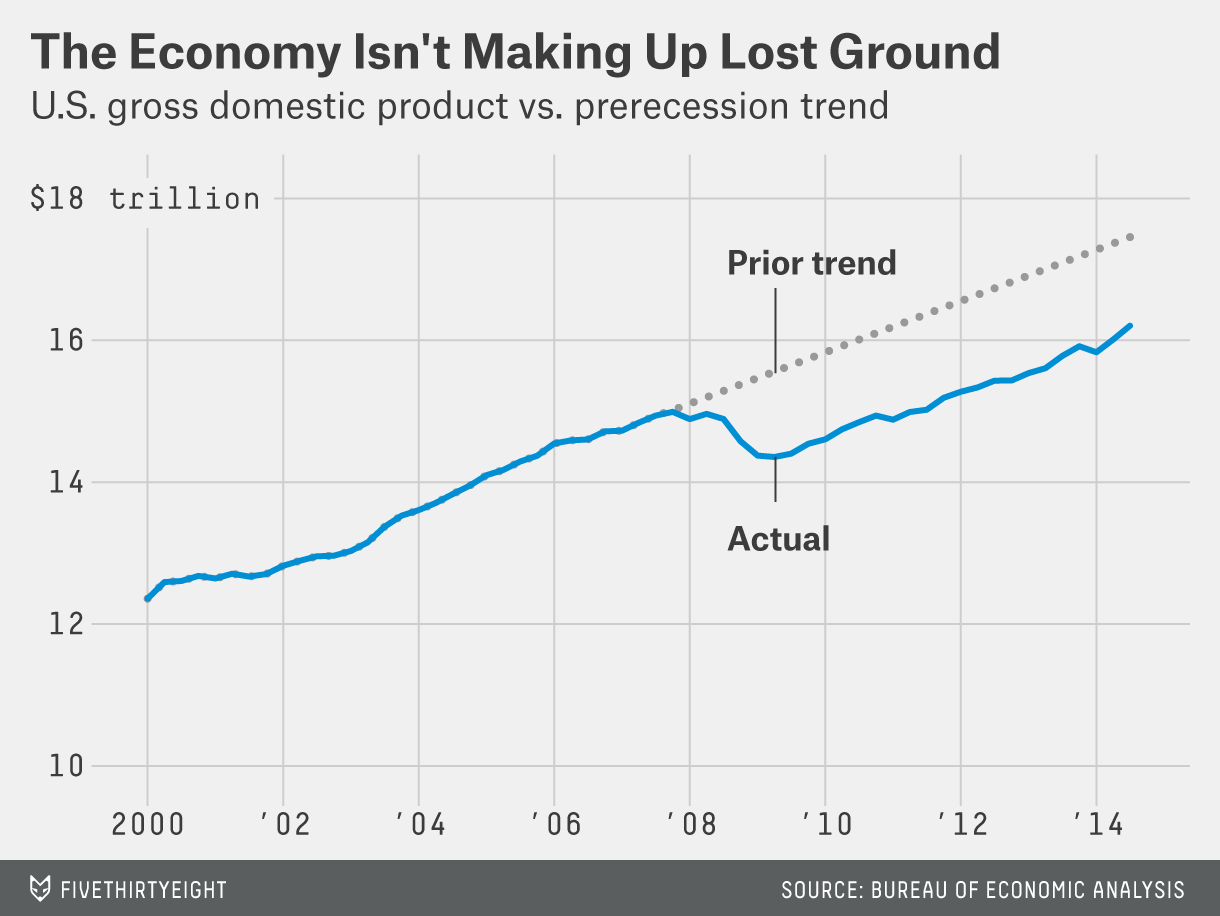 Former Treasury Secretary Lawrence Summers has popularized the related theory of “secular stagnation,” the idea that the U.S. and other developed countries have entered an extended period of slower economic growth. The coming year won’t render a definitive verdict on that thesis, but it will provide an early hint. If faster growth leads to higher incomes for the middle class, it would suggest the U.S. economy is at last finding its footing. If it doesn’t, that will point to deeper problems that even a strong recovery won’t be able to solve.