Last month, I wrote that it was time to retire clichés about the “slow but steady” recovery in the job market. The recovery had found its footing; there was no longer anything “slow” about it. But I had one caveat: Job growth was strong, but employers weren’t raising pay.

Now even that caveat is looking less necessary.

The Bureau of Labor Statistics reported Friday that employers added 321,000 jobs in November, the most in nearly three years. And crucially, employers are paying workers more: Average weekly earnings rose 2.4 percent from a year earlier, their fastest pace in a year. 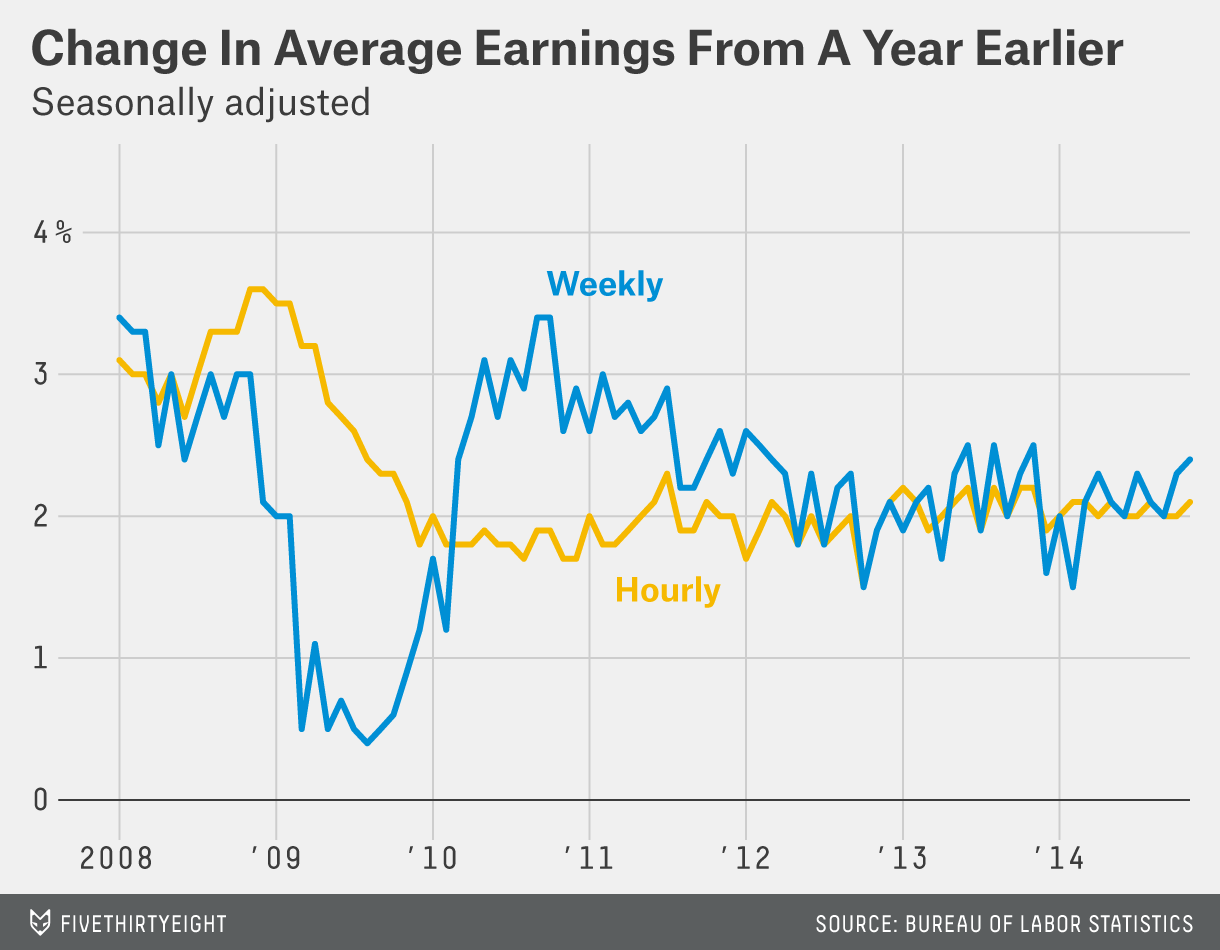 Note that’s weekly earnings. Hourly earnings are up a more modest 2.1 percent, only a bit faster than the rate of inflation. The growth in weekly earnings was driven by companies asking their employees to work more hours — a good sign for the economy but not evidence that employers are being forced to offer raises to hold on to workers. In any case, one month of solid wage growth isn’t enough to declare victory.

But let’s call a spade a spade: This month’s jobs report crushed it. Job growth far exceeded economists’ expectations — they were predicting only about 230,000 new jobs — and was widely distributed across industries. The government also revised up its estimate of September and October job growth by a combined 44,000 jobs. There were some notes of caution buried in the report, as there always are, but all the trends are pointed in the right direction. After years of tempered optimism, this economy is finally starting to look like one that Americans can feel good about. 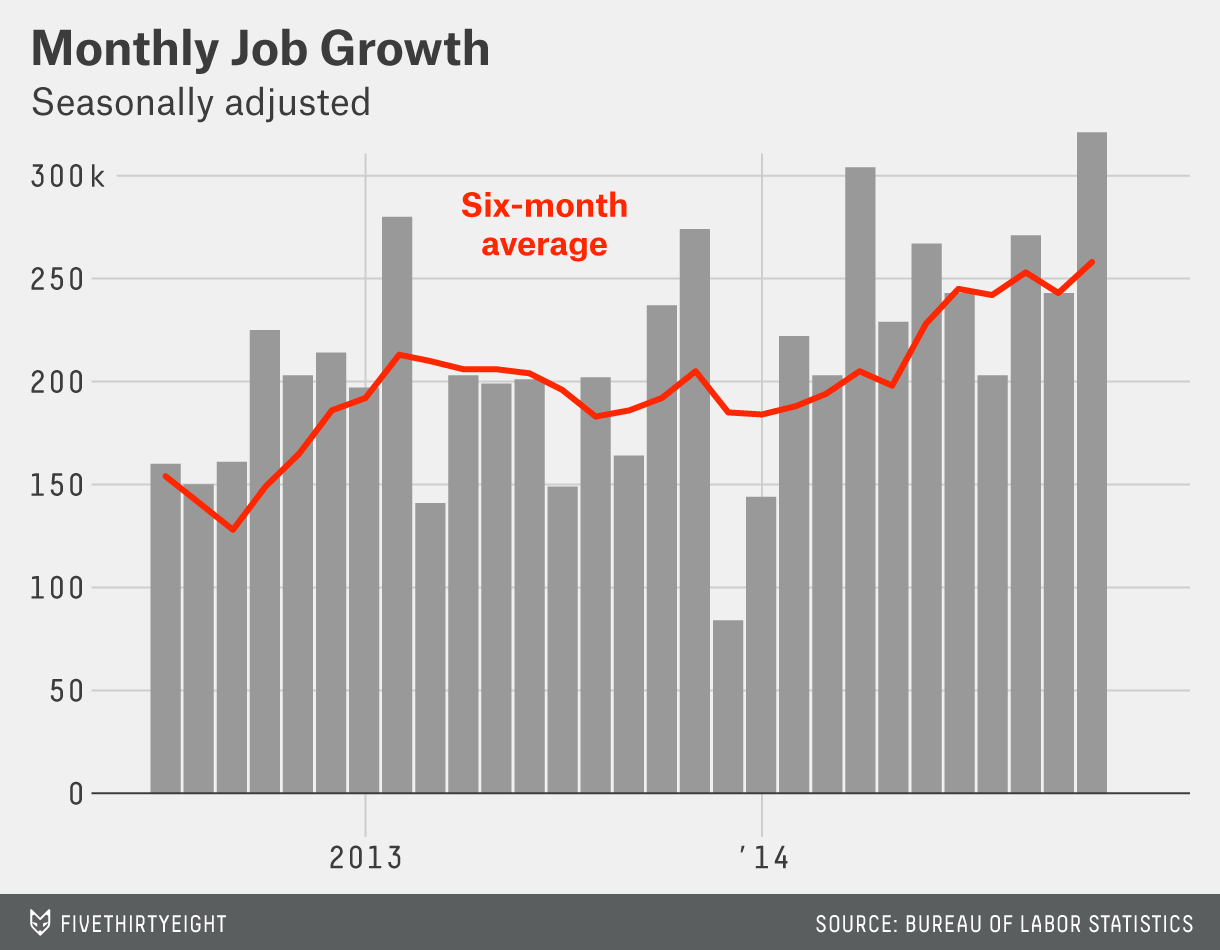 Here are some other observations from Friday’s report:

A strong trend: It’s never wise to get too excited, or too depressed, over one month’s jobs report. The month-to-month figures are volatile and subject to revision. But though November’s 321,000 jobs may turn out to be an outlier, the longer-run trend is nearly as strong. This was the 10th consecutive month of job growth over 200,000 — the first time that’s happened since the Clinton administration. The economy has added 2.7 million jobs over the past year, and the year-over-year pace of job growth has shown a clear acceleration in recent months. 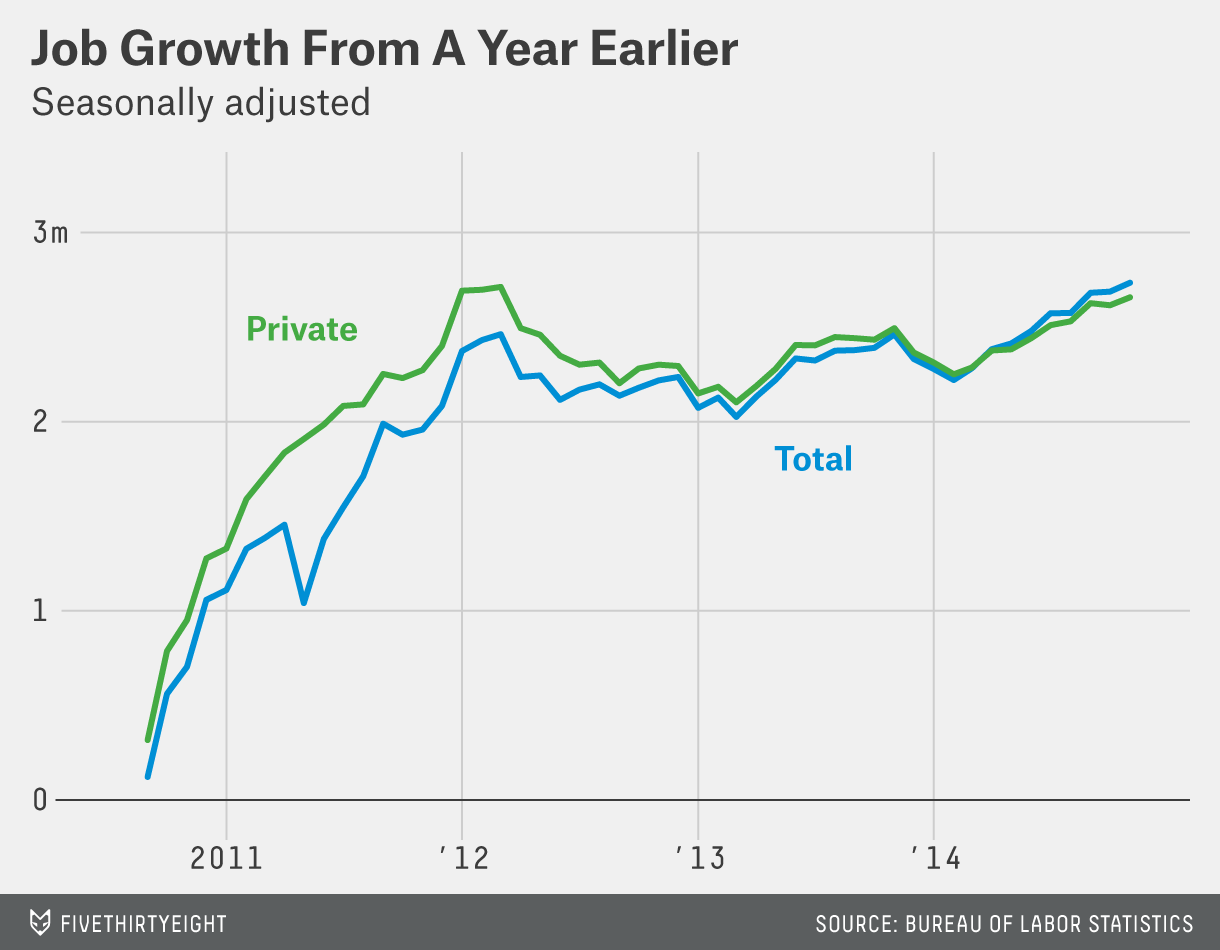 Not just jobs. Good jobs: One of the fears in the recovery has been that while the economy is creating more jobs, it isn’t necessarily creating the right kind. But that’s been less true in recent months. In November, job growth was spread across industries, with construction, manufacturing, finance and other generally well-paying sectors posting strong gains. Meanwhile, fewer people are getting stuck in part-time jobs. The number of people working part time because they can’t find full-time work is at its lowest level since the recession (although it remains high by historical standards). 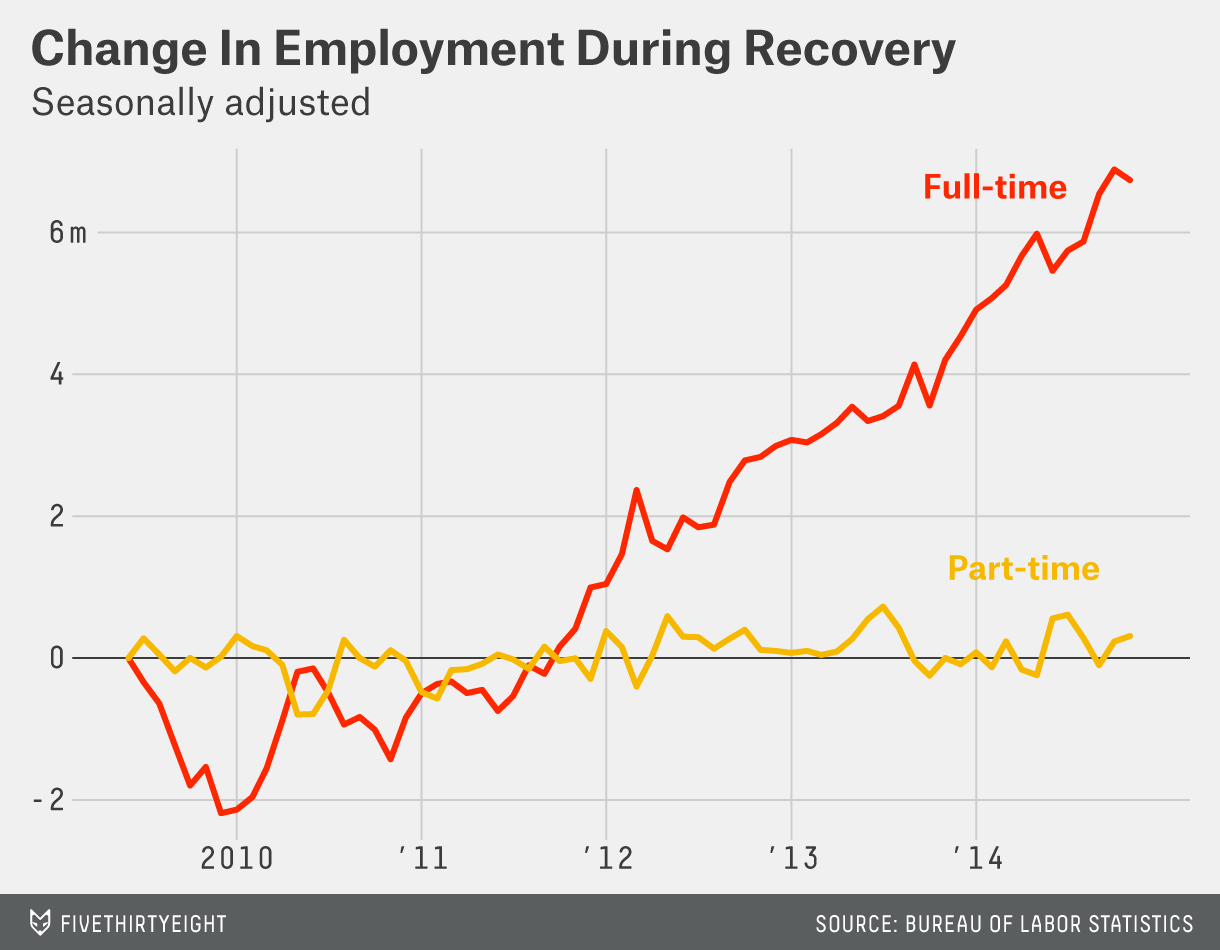 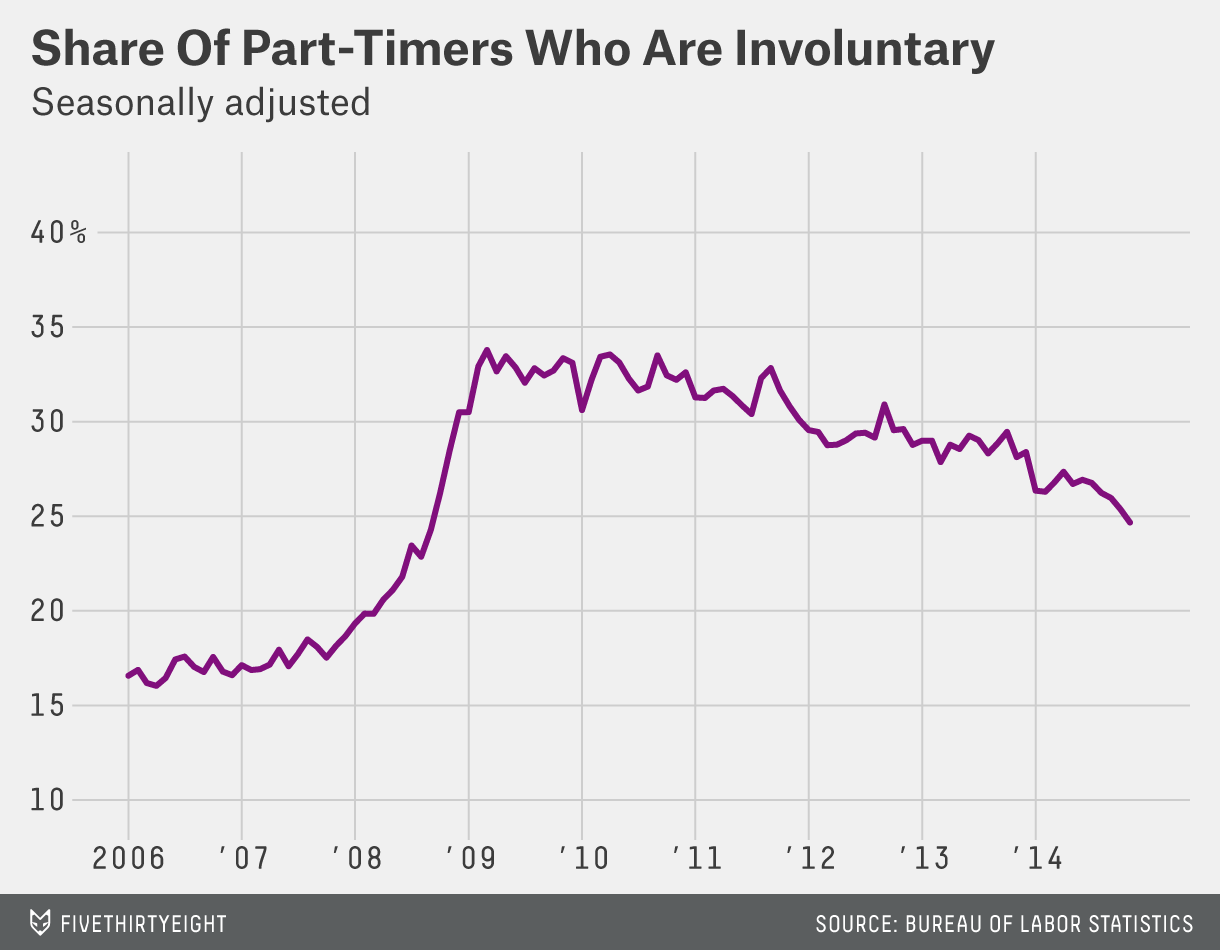 Unemployment flat: The unemployment rate remained unchanged at 5.8 percent in November, which might sound surprising given the rapid pace of job growth. As regular readers know, the jobs report is based on two surveys: a huge survey of businesses, which is the source for data on job growth, and a smaller survey of households, which produces the unemployment rate and related figures. This month’s household survey wasn’t as strong as the business survey: Unemployment was up slightly, and employment was barely positive. That most likely reflects monthly volatility — last month’s household survey was unusually strong — and the overarching trend remained positive. But Friday’s report does drive home how hard it remains to find a job: More unemployed Americans stopped looking for work than found jobs in November, and fewer people re-entered the labor force to look for work. 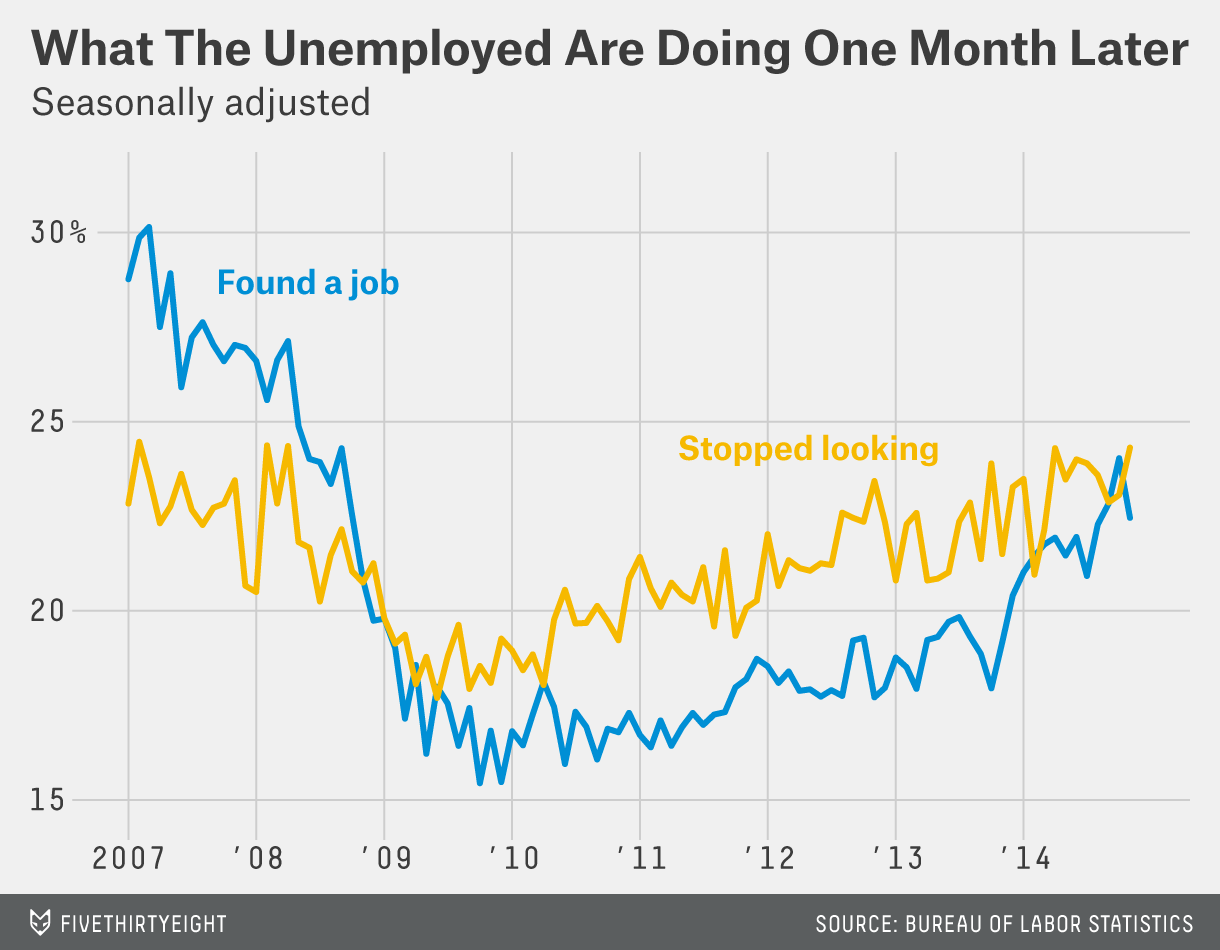 CORRECTION (Dec. 5, 11:50 a.m.): In a previous version of the “Monthly Job Growth” chart, the line showing the six-month average was incorrect. The chart has been corrected.