Saturday brings a handful of games that are close enough to be fascinating — or boring; it depends on your point of view. Love blowouts? We’re unlikely to see one in this set of games (Uruguay and Costa Rica’s predicted goal differential is just 0.7) . But we do have one of the most mismatched mascot matchups with Japan versus Ivory Coast. 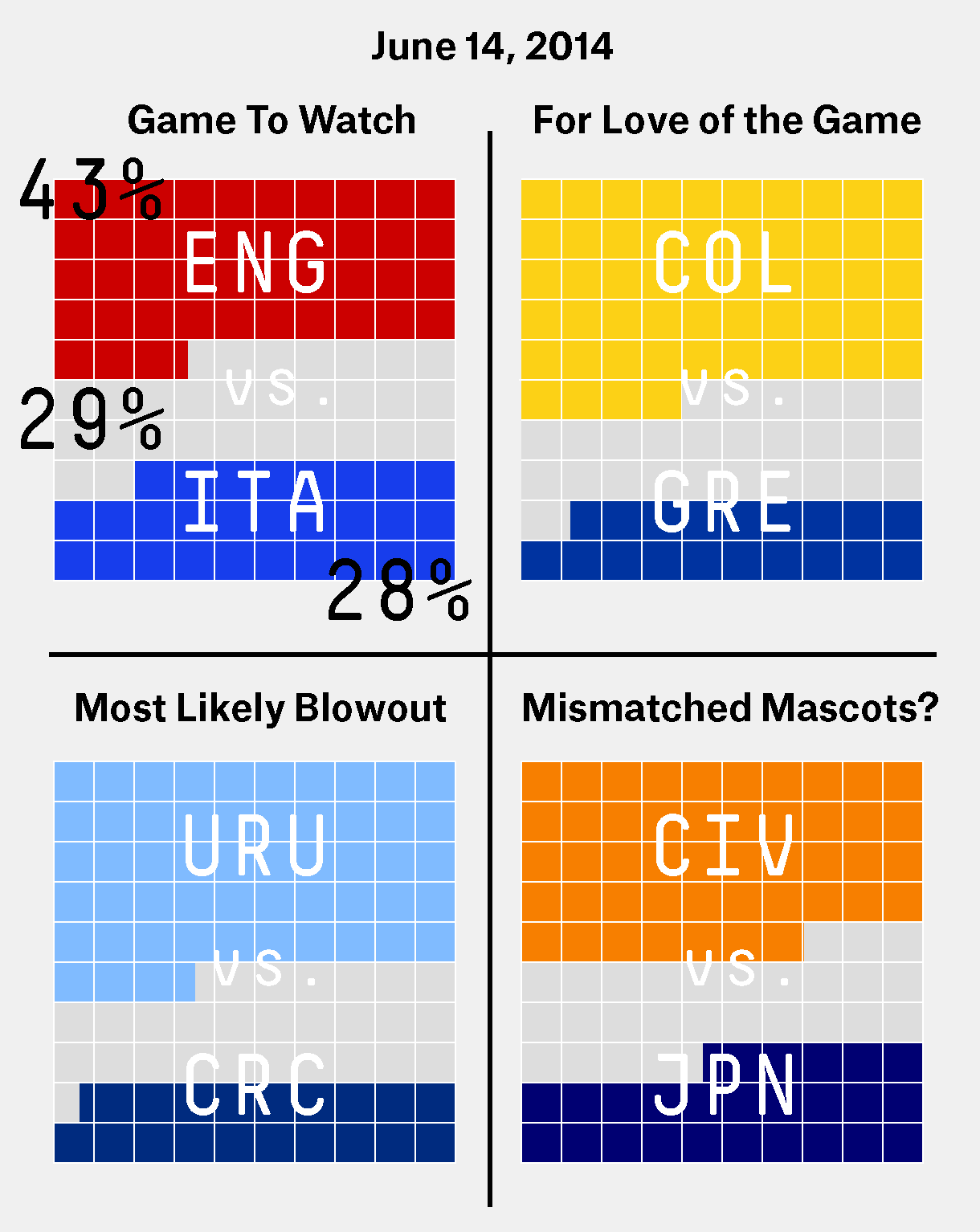 Today’s sexiest matchup is, of course, England against Italy — a battle between the third-most and fifth-most successful countries in World Cup history. But it’s not quite as sexy as you’d think from the teams’ reputations.

England currently ranks tenth in the Soccer Power Index, ESPN’s worldwide ranking of national teams, and that’s quite a bit lower than where it was in the lead-up to the 2010 World Cup. Back then, the FiveThirtyEight model (which is based on SPI) gave England the third-best tournament win probability (13.2 percent) of any team in the field. This year, though, England has just the ninth-best chance, at 1.6 percent.

Italy, meanwhile, sits even lower in the current SPI rankings — 15th — and its 11th-place showing in the current Elo ratings is the lowest it’s been going into a World Cup since 1986. According to SPI, Italy only has a 1-in-188 chance of winning the Cup this year.

Both teams had a similar path through qualifying and friendlies. England played to draws against Ukraine (twice), Poland and Montenegro, and failed to win in four of its last five friendlies against top-10 Elo sides. Italy had draws against Armenia, Denmark, Czech Republic and Bulgaria in qualifying, and is currently riding a seven-game winless streak against international competition. Needless to say, both sides’ form could be better heading into group play.

But the talent is still there. England’s roster includes a number of the best players in the English Premier League — Wayne Rooney, Steven Gerrard, Danny Welbeck, Daniel Sturridge, Raheem Sterling — making the team a worthwhile watch even if the Three Lions always seem to play beneath their skill level. Likewise, Italy has a host of recognizable names: Mario Balotelli, Andrea Pirlo, Giorgio Chiellini, Daniele de Rossi, etc. (Although it’s worth noting that SPI’s plus/minus player-rating system, part of which looks at club team performance, doesn’t think quite as highly of Italy’s stars as it does of England’s.)

So watch for the stars, and the tradition. One of the group stage’s most competitive games should break out, even if these particular squads aren’t quite at the level usually befitting the insignia on the front of the jerseys.

The Netherlands’ 5-1 defeat of Spain on Friday was the worst for a defending champion in World Cup history, and one that ESPN’s Soccer Power Index gave only a 1-in-1,030 chance of happening. The result was almost impossible to predict, but the match’s opening 30 minutes went very much according to plan.

The first two-thirds of the first half showed why Spain looked like a bad matchup for the Dutch to test their recent switch to a 5-3-2 formation.

All five Dutch backs were making their World Cup debuts, and simple turnovers led to a pair of early Diego Costa chances for Spain. Spain held a 56-9 advantage on touches in the attacking third, paced by a 40 for 58 passing performance into the final third. In that same span, the Dutch completed only 85 total passes, including just nine into the attacking third.

A penalty kick goal from Xabi Alonso at the 27-minute mark put Spain up 1-0.

The next 60 minutes were somewhat less predictable.

One of the strengths of a 5-3-2 formation is the opportunities it presents fullbacks to get forward in attack, and Dutch left fullback Daley Blind was Exhibit A for what happens when it works. Blind struck a long ball to Robin van Persie, whose 17.5-yard header was the longest headed goal since 1970 (the start of ESPN Stats & Info’s data set).

Over the last 60 minutes of the match, the Dutch matched Spain’s attacking-third passing total (42 completed passes each), a rare feat for this generation of Spanish soccer. — John Parolin, senior stats analyst, ESPN

An exciting foot chase between an English striker and an Italian defender may evoke a Rolls Royce racing a Fiat — both countries are known for their fine cars as much as their footballers. And sure enough, according to OECD trade data (if you’ll permit us to let U.K. figures stand in for English ones), cars represent the largest British export to Italy, at over 12 percent in 2011; and about 7 percent of Italians’ exports to the U.K. were cars or auto parts, too.

Cars, buses and delivery trucks also make up the lion’s share of Japan’s exports to the Ivory Coast, at over 50 percent. Flows back to Japan are even more concentrated — in cocoa. Cocoa beans, butter and paste comprise over 90 percent of all Ivorian exports to Japan.

Colombian charcoal will likely be firing grills in Greece during the two countries’ matchup on Saturday, as coal briquettes make up nearly one-third of the former country’s exports to the latter. Greek razors (at 19 percent) are the major good traveling from Athens to Bogotá.

The largest export from Costa Rica to Uruguay, gruesomely, is “human or animal blood” worth about $66 million in 2011. (If that sounds like a lot, it isn’t; the world’s largest exporter of blood is the United States, at over $19 billion.) The more, um, edible export shipped to Uruguay from Costa Rica is rice, at 21 percent. — Andrew Flowers