With the World Cup taking place in a country comprising several different ecosystems — a rain forest among them — you’re going to be hearing a lot about the weather in Brazil over the next month.

But we don’t have to wait until the day of — or even five days before — any given match to get a sense of what the weather will be. We already know the broad outlines of the next month of weather in Brazil — June and July have happened before, after all, and somebody kept track of whether it rained.

I did something like this for the Super Bowl in New York, when I provided a climatological forecast based on years worth of historical data. This isn’t the most accurate way to predict the weather — seven days before a match there will be far better forecasts — but it is a solid way to do it many weeks in advance.

I collected past weather data for the World Cup’s timespan (mid-June through mid-July) from WeatherSpark and Weather Underground for the observation stations closest to the 12 different World Cup sites. Keep in mind, the data for the different areas of Brazil hasn’t been collected for as long as it has in the United States. In some cases, we only have records since the late 1990s, which is about half as many years as I’d like to make the best climatological assessment. Still, history can give us an idea of the variability of the weather in Brazil. 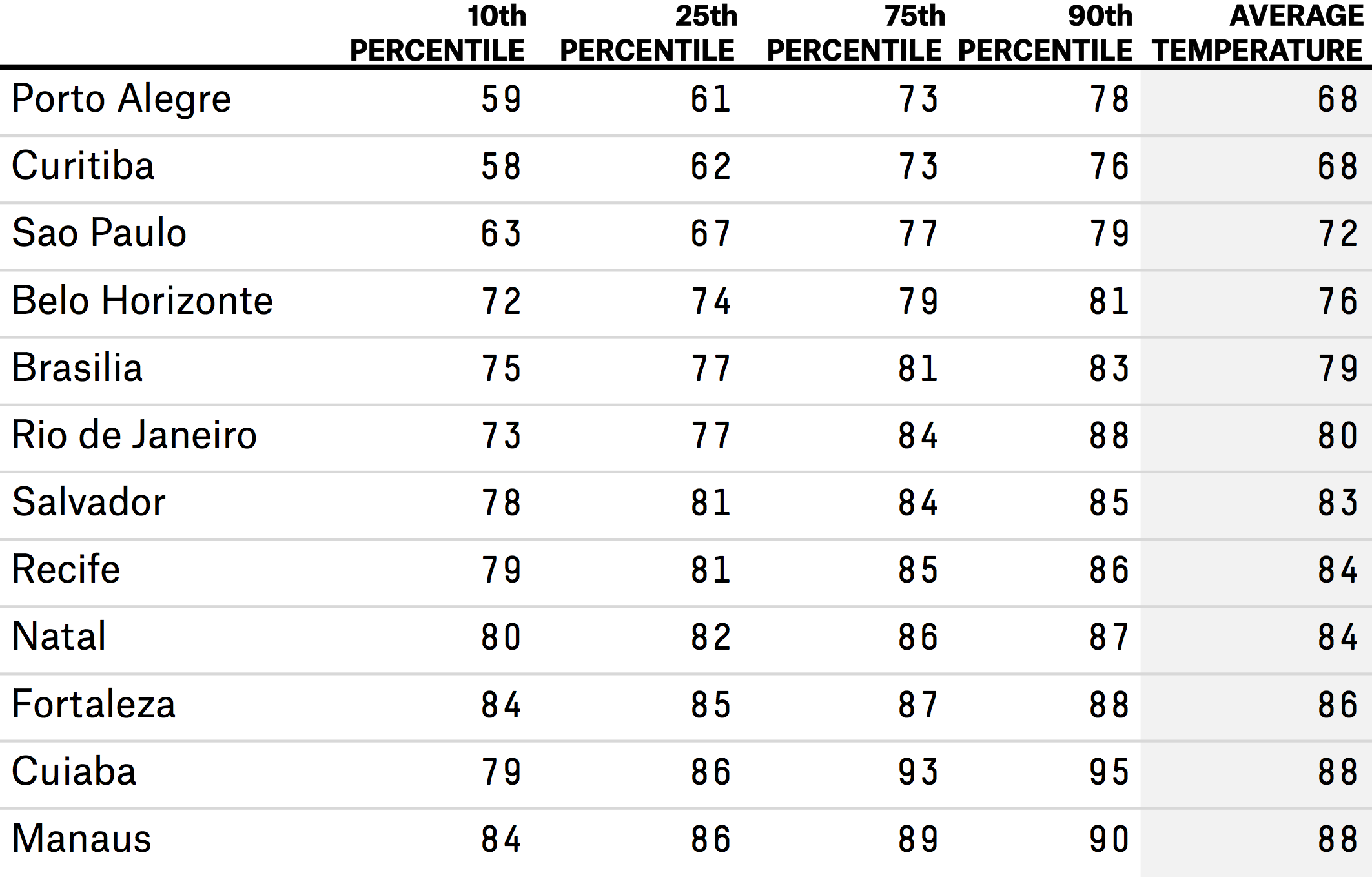 What we see is that the weather can be quite comfortable or hot, depending on the site. In the southern coastal region, we see high temperatures that average below 70 degrees Fahrenheit in the cities of Curitiba and Porto Alegre. (I’ve presented all temperatures in Fahrenheit.) It may seem odd to you that southern areas are actually coolest, but remember that this is the southern hemisphere, so everything’s topsy-turvy for a Northerner. It’s winter in Brazil, and climatology suggests that we shouldn’t be surprised if the high temperature is below 60 degrees at one of these sites.

But most of the country is not like these two sites. Belo Horizonte and Brasilia reach the mid- to high 70s usually, but don’t go too much higher because of their elevation (2,720 feet for the former and 3,500 feet for the latter). From Rio de Janeiro northward, temperatures average 80 degrees or greater, but winds from the ocean will often keep them from getting out of hand.

The site tied for the highest median temperature is Manaus, which is also surrounded by the Amazonian rainforest, making it the most interesting site climatologically. There’s a 15 percent chance that it will rain in Manaus on any given day during the tournament. In small quantities, rain can help a passing game by making the grass slick, but if there’s too much precipitation, it can slow the ball significantly as the pitch gets waterlogged. And that doesn’t even get to the threat of lightning, which can halt a game completely.

But Manaus isn’t the site with the highest chance of rain. (Just the highest chance of thunderstorms.) To figure out what is, I looked at the average rainfall and thunderstorm tallies during the 1 p.m. to 6 p.m. hours during June and July in past years. From there I estimated the chance of rain during two-hour stretches in the afternoon and early evening, rather than for the entire day.

So here are approximations for each site on rain and thunderstorms during the games: 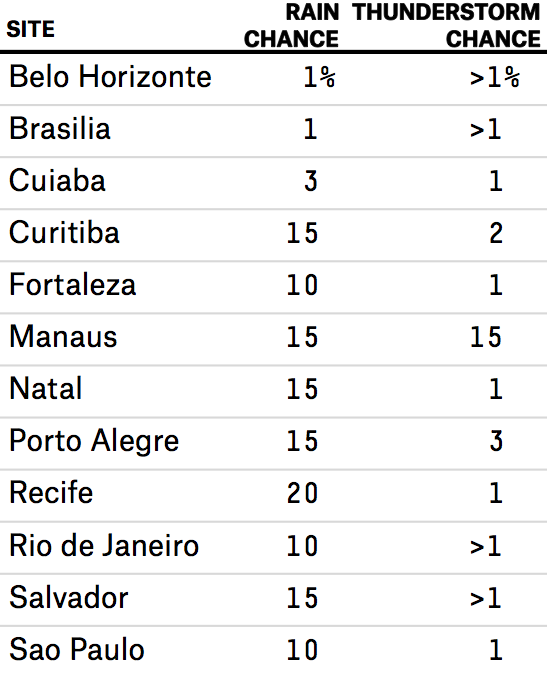 It probably won’t rain during any given match, but if it does it’s likely to be in the sites closest to the tropics in the north and the humid subtropical climate in the south. Recife, for example, has the best chance of rain of any site in the country, in part because it’s right where a lot of different air masses combine, which makes the weather there somewhat more unpredictable.

Thunderstorms, on the other hand, rarely occur anywhere besides Manaus, where the chance of a thunderstorm in a given afternoon hour is in the double digits. Manaus is also where the United States will be playing against Portugal in its second match; climatology suggests it should be a muggy game.

The Americans’ other games are likely to be hot but dry. The United States’ first match, against Ghana, is in Natal on Monday, a city that normally is expected to offer a high temperature around 84 degrees, with a slightly cooler temperature by the evening game time. The current forecasts (based on meteorological data, rather than climatology) are calling for something around normal with around a 15 percent chance of rain, as we’d expect. The weather for the U.S. team’s third match, on the coast in Recife, should be about the same. Thunderstorms probably won’t interrupt the game, but rain is possible.

Most likely, though, the weather will hold up just fine. The optimistic U.S. fan can safely engage in blue-sky thinking — for the team’s chances, and for the skies above it, even if our coach is finding another way to rain on the parade.