The World Cup’s knockout stage begins Saturday, with both matchups pitting South American teams against each other. Lose and they’re gone. 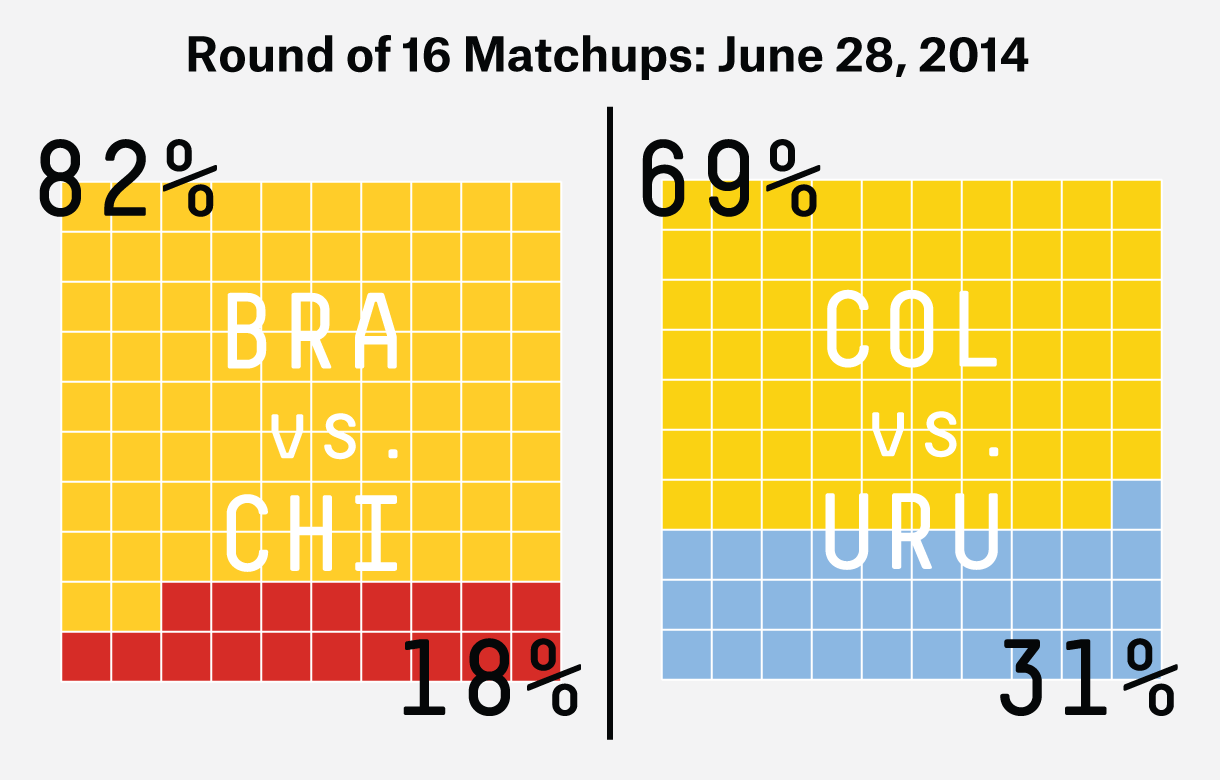 Uruguay must face Colombia without striker Luis Suárez, who has been suspended nine games for eating a little Italian (defender Giorgio Chiellini) during Uruguay’s 1-0 victory over Italy on Tuesday. That’s good news for Colombian players who don’t care to be sampled like beef jerky, but bad news for Uruguay, which has proven itself to be more effective with Suárez than without him.

Suárez’s teammates missed him when sat out Uruguay’s June 14 Group D match against Costa Rica because of tenderness from a knee operation three weeks earlier. Although Uruguay possessed the ball 56 percent of the time, it managed just nine shots (compared to Costa Rica’s 13), with only three on target. Without Suárez, Uruguay couldn’t finish and lost 3-1.

Contrast that to Uruguay’s 2-1 victory over England on June 19. With Suárez in the lineup, the Uruguayans possessed the ball only 37 percent of the time but made the most of their opportunities: Suárez took Uruguay’s only two shots on frame and converted on both. He didn’t score when the team edged Italy 1-0, but he took a good bite out of the Italians’ concentration, and the Uruguayans scored soon after.

The Colombians are led by attacking midfielder James Rodríguez, who has three goals and two assists in the tournament. Our World Cup predictive model gives Colombia a 69 percent chance of beating Uruguay.

Saturday’s other match pits host Brazil, which won twice and drew once in Group A play, against Chile, which went 2-1 in Group B. ESPN’s Soccer Power Index rates Brazil as the best team in the world, and our model gives it a 41 percent chance of winning the tournament. We give it a 82 percent chance of beating Chile.

Brazil and Chile aren’t neighbors, but that hasn’t stopped them from forming close ties, both historically and in the modern day. After winning their independence from Portugal and Spain, respectively, in the early-19th century, their relations began with mutual support in separate conflicts with Argentina. More recently, the two countries signed bilateral agreements in education, culture and research — and that was before Chilean President Michelle Bachelet was re-elected and promised to put more focus on the nation’s relationship with Brazil. But what does that mean for these countries’ trade?

According to data from the Observatory of Economic Complexity, the cooperation translates. In 2012, Brazil sent $9.59 billion worth of exports to Chile, but without a focus on one particular product. The biggest share was crude petroleum, at about 26 percent, but public passenger vehicles, bovine meat, footwear, glues and chocolate all had significant shares as well. Flowing in the opposite direction was $8.33 billion worth of Chilean goods. Their breakdown is a little more imbalanced, with cooper making up 55 percent of exports, but the remaining products are well-distributed, with things such as fresh fish, fertilizers, wine and car parts all comprising comparable fractions of exports to Brazil. — Hayley Munguia