Starting Saturday, only 16 of World Cup’s qualifying 32 teams will continue to play in the tournament. After just two matches, Spain — the defending champion — was the first country to be eliminated during the group stage. Notable squads like Italy, the 2006 champion, and England are also heading home.

Because the World Cup is the most anticipated sporting event on the planet, many fans are unlikely to tune it out after their country is booted. But which team will they root for now?

Answering this question isn’t easy. Once patriotism is out of the equation, a preference for another country’s side could be based on all sorts of factors: Do you love one team’s style of play? Are you influenced by politics, religion or race? Did you have fond memories of travel to a particular place? Perhaps the most confounding factor is whether you’re motivated by love or hate. That is, will you root for your next favorite country or against a loathsome rival?

The ideal data to help answer this question would be recent, statistically-sound, cross-country polling of all 32 nations participating in the World Cup. Unfortunately, as is often the case in data analysis, our wishes have not been granted.

The best polling we’ve got is the Pew Global Attitudes Survey, which provides cross-country favorability measures for nine of the countries participating in this year’s tournament: the U.S., the U.K. (which we’ll take to approximate England’s team), France, Greece, Italy, Germany, Spain, Iran and Russia. The survey tries to gauge Greeks’ opinions of Spaniards, Russians’ of Americans, and so on. The specific question that Pew poses is, “Please tell me if you have a very favorable, somewhat favorable, somewhat unfavorable, or very unfavorable opinion of [country name].” The acceptable responses are, “Very favorable,” “Somewhat favorable,” “Somewhat unfavorable,” “Very unfavorable” and “Don’t know/Refused.” To condense this information into one value, I’ve weighted the responses +2, +1, -1, -2 and 0, respectively. 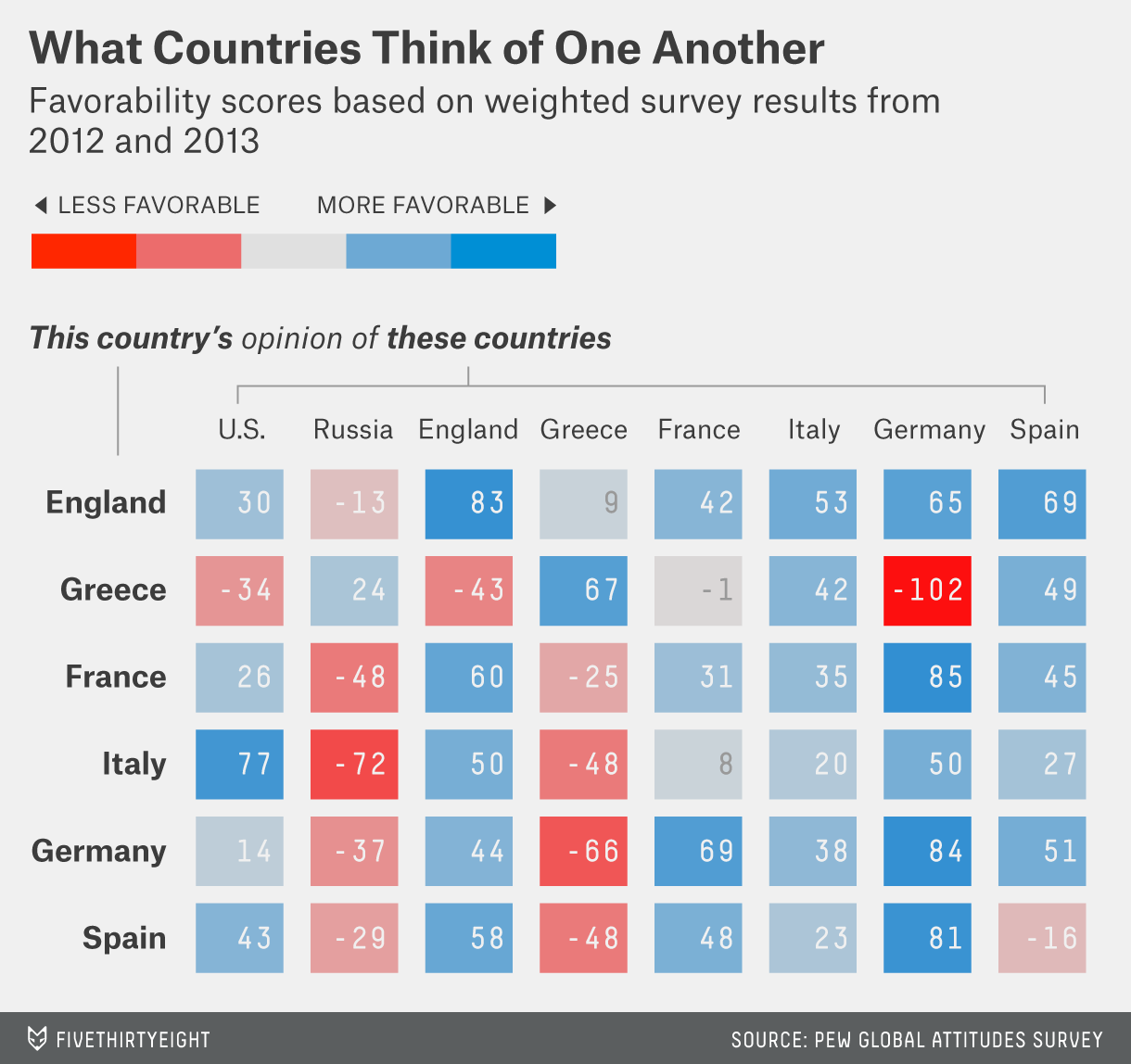 Based on the favorability polling, it appears the English might prefer Germany over France of the teams left in the World Cup. But you probably won’t catch an Italian cheering on the Greek national side. No, fans in Rome might instead be rooting for the United States. (In fact, the Italians view the U.S. more favorably than they view their own country.) The defending World Cup champions, Spain, ranked Germany in the most favorable terms, followed by England and then France. So with no more matches of their own in Brazil, the Spanish might be inclined to root for Germany.

But if you look closely, yes, that’s right: The country that has the lowest opinion of Spain is … Spain. It’s worth noting that Pew conducted this survey in March and April of 2012, at the height of the European economic crisis.

Greeks, for example, have an extremely unfavorable opinion of Germany. That’s no surprise given the intra-Eurozone disputes over bailouts, austerity measures and dire economic circumstances. (So, if Greece were to be eliminated in the knockout round and Germany played on, it’s a safe bet that Greek fans wouldn’t be cheering for Die Mannschaft.) But outside of Greece, Germany appears to be rather highly regarded. On the flip side, Russia is viewed unfavorably throughout Europe, except by Greece. (Russia exited the tournament after drawing with Algeria on Thursday, but the Greeks will have at least one more opportunity to cheer on their national side in the Round of 16.)

Still, no matter whom the eliminated countries’ fans go on to root for — if they root for any country at all — that new team won’t match the fans’ true wish: for their original favorite to have won the Cup.

CORRECTION (June 27, 10:45 a.m.): An earlier version of this post misstated the result of Thursday’s Algeria-Russia match. It ended in a draw, not a loss for Russia.