Certainly, we’ve reflected positively upon Rodriguez’s immense talent — steroids notwithstanding — in the past. But we also thought it would be a useful public service to once again point out that passing a legend on a prestigious statistical list doesn’t necessarily mean you’re the better player. In the case of the Say Hey Kid versus A-Rod, it’s Mays in a landslide.

An easy way to measure Mays’ dominance over A-Rod is to look at the all-time wins above replacement (WAR) leaderboard1. By total WAR, Mays ranks as the fifth most-productive player in major-league history, trailing only Babe Ruth, Barry Bonds and pitchers Cy Young and Walter Johnson. Mays also ranks as the third-best non-pitcher ever, according to JAWS, which attempts to balance a player’s aggregate WAR compilation against the brilliance of his peak. Among position players in the history of baseball, only Ruth had a better prime — as measured by WAR in a player’s best seven seasons — than Mays did when he was at the top of his game.

Rodriguez also ranks highly in WAR, but his numbers are nowhere near those of Mays. A-Rod ranks 17th all-time in total WAR, trailing Mays by about 40 wins. At his career rate of WAR per 162 games, Rodriguez would have to play five and a half more seasons of 162 games apiece — that is, until age 44 — to catch Mays. It also bears mentioning that Rodriguez hasn’t even played more than 150 games in a season since 2007; at a more realistic rate of 125 games per year, he’d have to play until age 46 (with no decline in performance) to reach Mays’ total.

Since Rodriguez has recently missed big chunks of playing time in which he could have been accumulating raw WAR, his peak ranking fares a bit better than his overall WAR rank. That’s why A-Rod sits at 12th all-time in JAWS. But the difference in JAWS between No. 3 Mays and No. 12 Rodriguez is the same as the difference between Rodriguez and No. 33 Charlie Gehringer.

And the gap isn’t likely to close much before Rodriguez retires. While A-Rod is having a resurgent start to the 2015 season, Baseball Prospectus’ PECOTA projection system still only predicts about 0.7 more wins above replacement left in his career before his contract runs out (and, coincidentally, he begins to provide negative value) following the 2017 season.

So, any way you cut it, Mays provided much more value in his career than A-Rod.

From a skills perspective, Mays was also a better ballplayer than Rodriguez in most facets of the game.

Using percentile rankings in Fangraphs’ rate statistics for five key skill indicators — plate patience, contact and power hitting, speed, and (position-adjusted) defense — we can measure how good both Mays and Rodriguez have been in each category relative to their peers over the same range of ages2. They’re not exactly the canonical five tools of scouting lore (arm strength is wrapped up inexorably in defense), but they should give us an idea of the raw building blocks that made up Mays’ and Rodriguez’s playing styles: 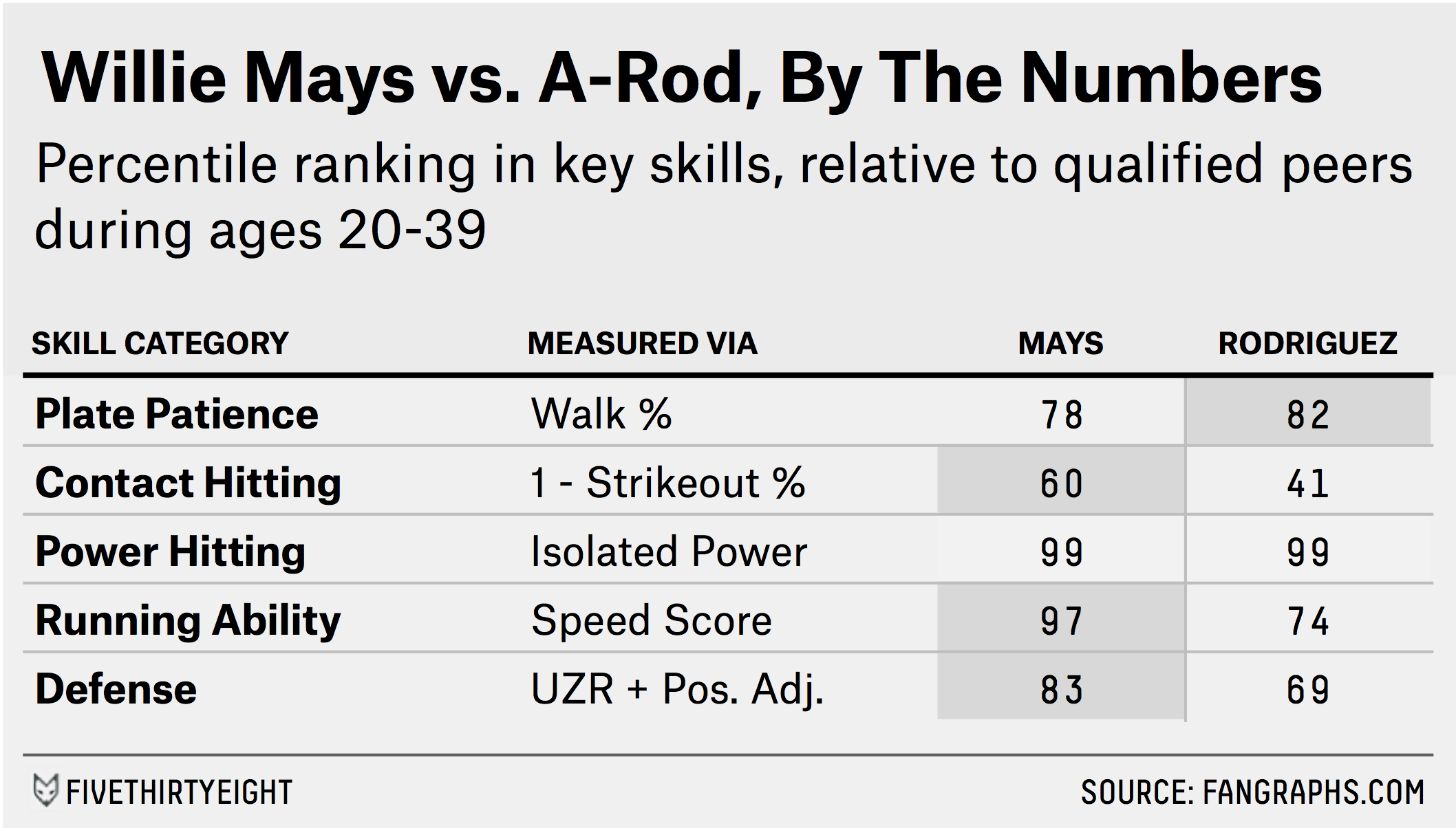 Mays and Rodriguez were both among the pre-eminent power hitters of their eras, and the two are also very close in terms of patience at the plate (in fact, A-Rod has drawn walks at a slightly greater rate than Mays, relative to his era). But Mays separated himself from Rodriguez — and just about everyone else ever — as an all-around ballplayer with his speed, defense and ability to make contact at the plate. Not only did Mays compile a fantastic statistical record, but he did it without any real flaws in his game.

And it’s not as though Mays’ playing style was particularly better suited to his era. During Mays’ career, power hitting was more correlated with WAR — and defense less correlated — than during A-Rod’s era,3 so it’s possible Mays’ edge in defense would have produced even more value in the modern game than it did during his playing days.

Either way, Rodriguez — while an all-time great — is no Mays. The former’s passing of the latter on the all-time home run leaderboard should not be mistaken to mean that there’s any debate between the two in playing ability or career value. On both counts, Mays soars high above A-Rod.