If you’re a baseball fan, you’ve heard a scout, general manager or talk-radio yakker call somebody a “five-tool player.” The label promises that a player can do nearly everything — hit for average, hit for power, run, throw and field — better than most. While the tools don’t capture everything about being a good player, the more tools a player possesses, the thinking goes, the more well-rounded his skill set.

But in a modern baseball age, the five-tool worldview can seem outdated, and scouting lingo and its 20-80 grading scales for player tools anachronistic. Now that we have a more precise understanding of what makes a baseball player valuable, we know, for example, that it’s more important to be able to hit for power than it is to throw the ball real fast.

But after spending a couple of weeks with the data, I found that while certain tools are more valuable than others, estimated toolsiness actually does serve as a leading indicator for sabermetric value. To test this, I selected a representative statistic for each tool. For average, I used projected batting average, blending the ZiPS and Steamer systems. For power, I used projected isolated slugging percentage.1 For speed, throwing and fielding, I used data from the Fan Scouting Report. For each category, I calculated z-scores, an indicator of distance from the average, for every regular or semi-regular player from 2013. That allowed me to identify the players who were so far above the mean (one standard deviation) in each of the five tools that they can be called baseball’s true five-tool players.

Without further ado, they are:

There’s no Mike Trout, and there’s no Miguel Cabrera. Just missing inclusion, as well, are Adam Jones and Starling Marte; the former was just shy on fielding, and the latter was just shy on power. Most impressive: Two out of the four players are on the Colorado Rockies.2

But if those are MLB’s five-tool players, there’s something to be said for the toolsiest players — the ones who are most above the mean when considering all five tools combined. To measure aggregate toolsiness I just added up all the z-scores in each player’s tool set, and came up with the top 10 below. There’s an unsurprising man atop the list:

While Trout doesn’t count as a five-tool player because of his roughly league-average arm, he’s so good at everything else he makes up for that and then some. He isn’t bad at any one thing, and he’s terrific at several things. See each player’s tool score below:

But all tools aren’t created equal. Just adding up a bunch of tool scores assumes that speed is as valuable as slugging which is as valuable as arm strength. We know just from watching the game, though, that this isn’t the case. These days, a player’s value is synonymous with his wins above replacement (WAR) tally.

I calculated projected 2014 WAR per 600 plate appearances to balance all the players and estimate their true talent. Unsurprisingly, there is a strong relationship between aggregate toolsiness and projected WAR/600. The correlation coefficient comes out to 0.66, meaning there’s a real relationship there.3 It’s evident that the more tools a player has, the more valuable he is. 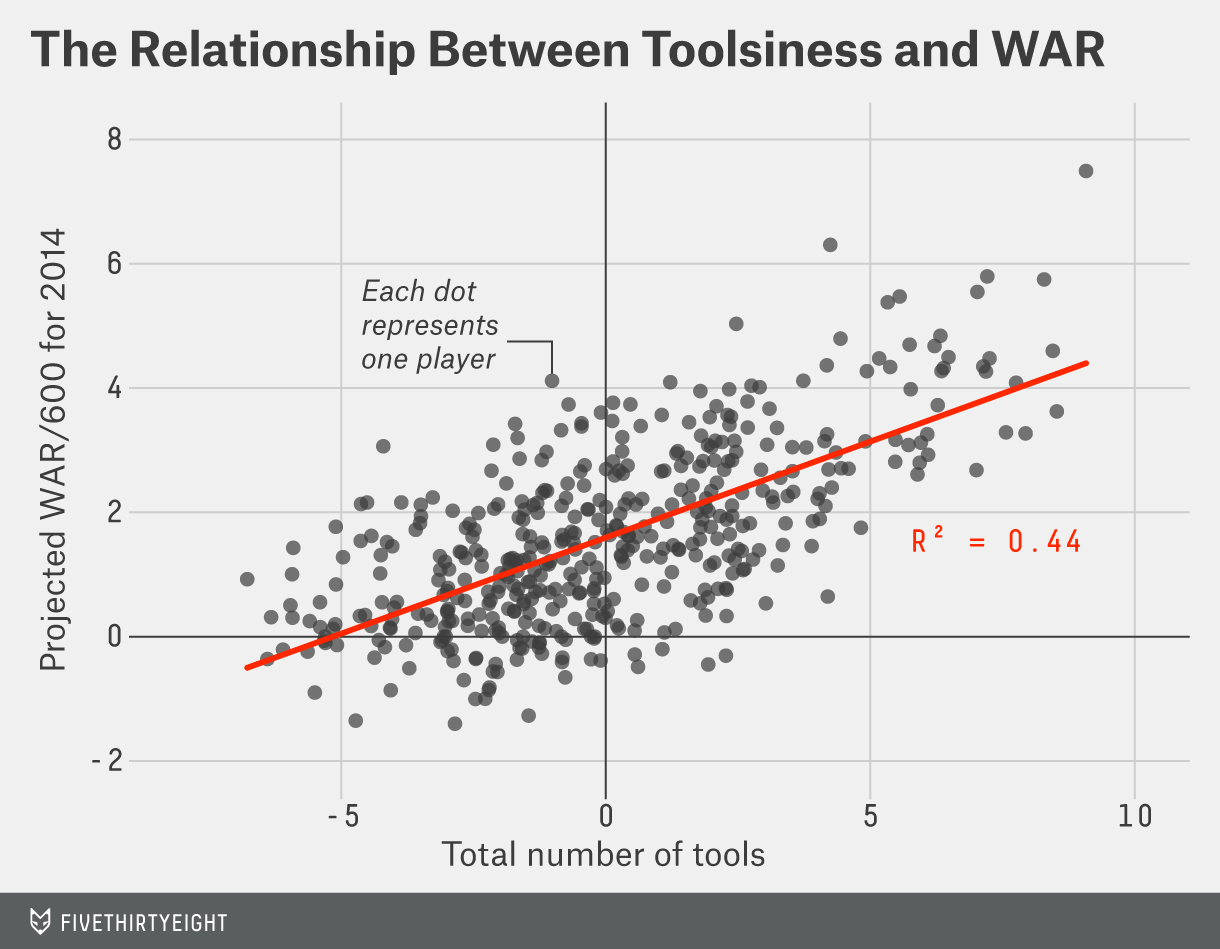 But that correlation is for aggregate toolsiness. Each tool also has its own relationship with WAR, which can tell us how important a given tool is to a player’s value. The table shows the correlation coefficient for each tool against projected WAR/600:

The two most valuable tools are hitting for average and hitting for power, with throwing and fielding close behind. Speed, it appears, is important but not necessary. A player can be successful if he lacks any one tool, but a player who lacks speed is likely to be better than a player who lacks, say, power, if all else was equal.

Intuitively, the breakdown makes sense — hitting is the biggest part of the game, for a position player, and while defense is important as well, speed makes only limited contributions to both. A player who only has speed won’t fit anywhere. A player who only has one of the other skills might be able to find a home.

Taking a look at projected WAR, you can see how the tools hierarchy manifests. Miguel Cabrera is projected to be one of the best players in baseball this year, but he’s below-average in combined speed, arm and fielding. The same can be said for Joey Votto. Giancarlo Stanton projects well almost entirely because of his power. Yadier Molina and Buster Posey are well below average in speed, but they’re MVP candidates because they can hit while playing an important position.

All this makes one wonder more about Billy Hamilton, the young leadoff hitter for the Cincinnati Reds. Hamilton has already broken some base-stealing records, and it’s been said he’s a 90 on the 20-80 scouting scale for foot speed. When it comes to running, there might not be anyone quicker. But Hamilton’s strength is also baseball’s least important tool, and the rest of his skill set is thought to be relatively unimpressive. He doesn’t hit for power, he hasn’t hit for much average, and though he can move around in the outfield, he hasn’t been blessed with a strong arm. Hamilton can make the most of his running, but it’s an open question whether it will allow him to be a quality regular.

Jeff Sullivan is an editor and analyst at FanGraphs and a Seattle Mariners supporter. @based_ball