Even though the United States is a bit insecure about its place in the world’s most popular sport, the U.S. women’s national soccer team has been dominant on the world stage for nearly a quarter-century. Tonight it will face off in the semifinals of the Women’s World Cup against Germany, with nothing less than the title of “greatest of all time” at stake. Each team has two World Cup championships, and they’ve been the two top-ranked teams in the world since FIFA’s rankings began in 2003. The winner will take the lead in World Cup finals appearances and will have the inside track to finish atop 2015’s rankings.

So how did we get here? Basically, it boils down to two things: 1) Women’s soccer has been on a great run for the past 30-plus years in the U.S., to the point where it’s poised to become our most popular women’s sport, and 2) the rest of the world has been relatively apathetic and/or hostile to the women’s game.

U.S. women’s soccer truly seemed to arrive in the public’s attention after the 1999 World Cup. If you’re old enough to have experienced the excitement and drama of it, there’s no way you could ever forget: 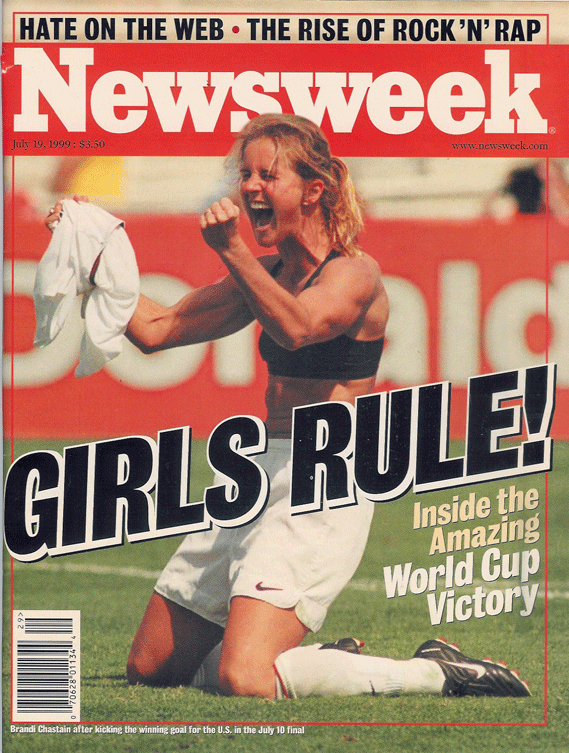 This success didn’t come from nowhere. Since almost immediately after the implementation of Title IX (which became law in 1972, with compliance required by 1978) U.S. women’s soccer has grown like crazy. Probably the cleanest and easiest venue to see how this has played out is at the high school level; the National Federation of State High School Associations (NFHS) has high school athletics participation data going back to the ’70s: 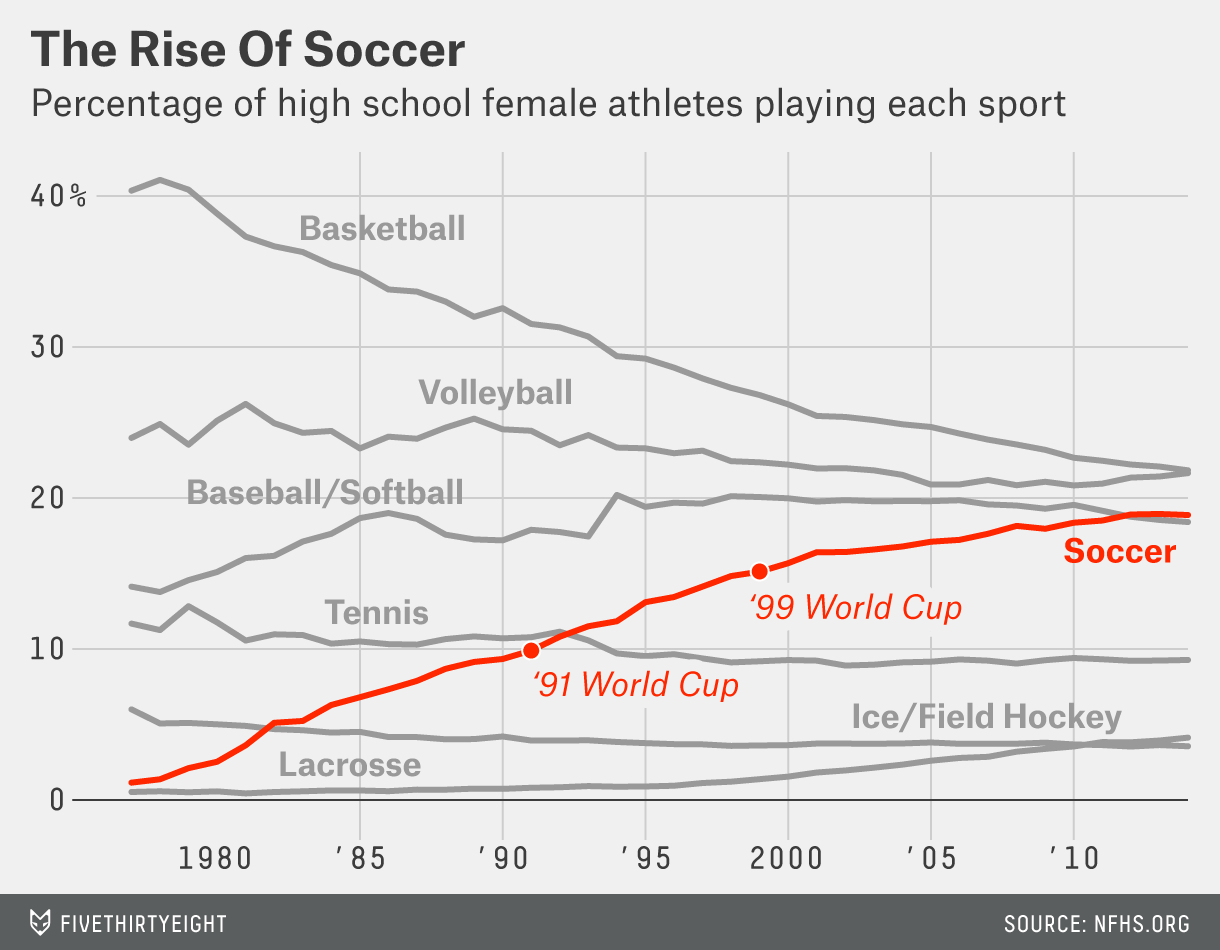 In the late ’70s, the number of high school women playing soccer was in the low five figures. By the time America won the World Cup in 1991, there were more than 120,000. By the time it won in 1999, there were more than 250,000. Now it is approaching 20 percent of all high school female athletes — about 375,000 — and has surpassed baseball/softball as the third-most-played team sport.

Soccer has grown both by taking women from other sports and by capturing a disproportionate share of “new” female athletes as more young women began to play sports. Note that the percentage decline for basketball — by far the most mature women’s sport in the country — looks steep, but the change in total number of players is fairly small (there were more women playing high school basketball in 2013-14 than in 1976-77.) Soccer, though, has still been adding numbers to its ranks rapidly, despite a bit of a slowdown in its growth shortly after 1999: 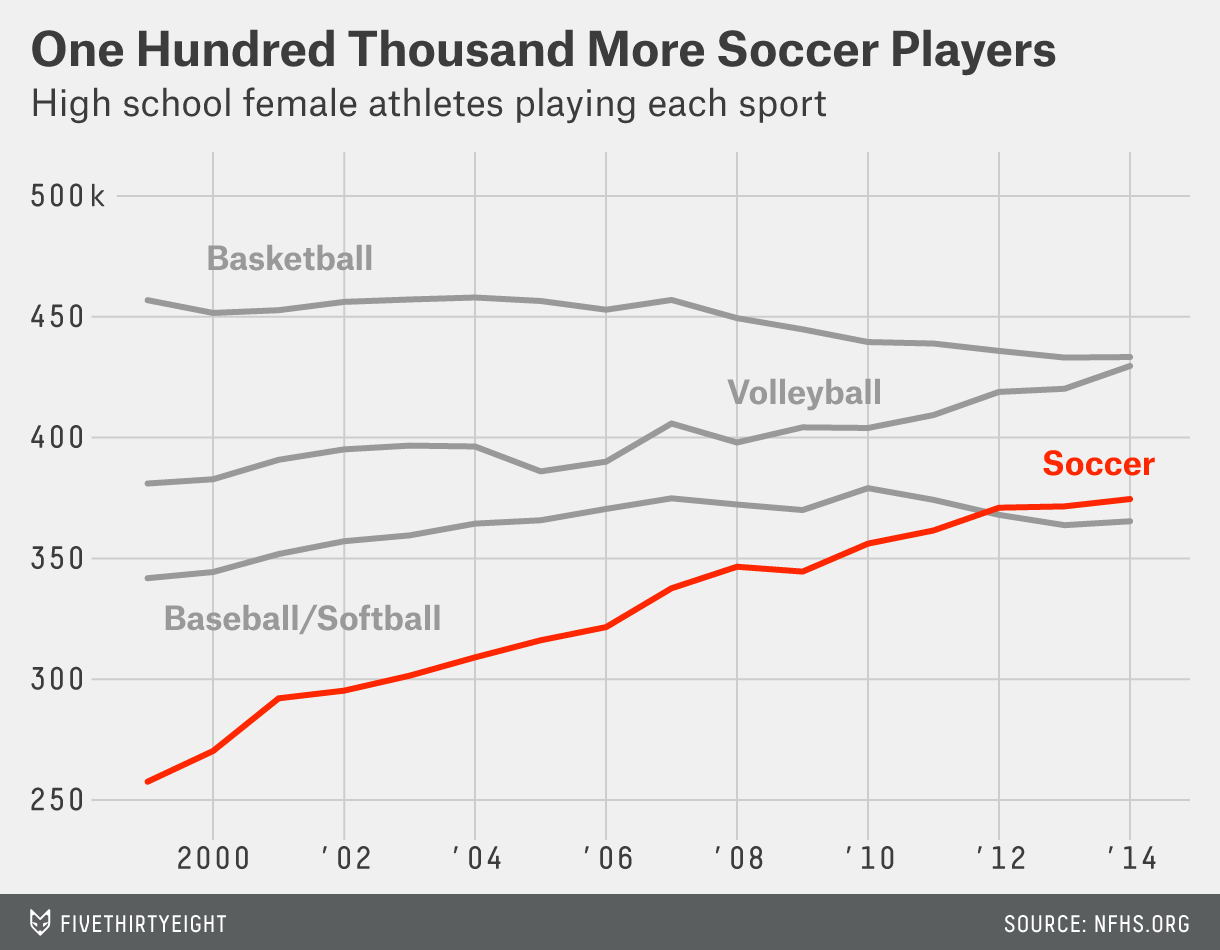 Soccer looks like it has a good chance of taking the top spot in the next 10-20 years. Yes, volleyball has been on a nice run of late, and looks likely to pass basketball as the most-played sport as early as this year. But volleyball is down from its peak (see chart above), and the upper limit for soccer is still unknown.

For as much as the rest of the world loves soccer, it has been much slower to embrace the women’s game than the U.S. In England, women playing soccer was effectively banned (at least at venues that hosted men’s teams) from 1921 to 1971, and in Germany it was banned from 1955 to 1970. At around the time Title IX was heating up in the United States, women’s international soccer basically didn’t exist. According to FIFA, there were only three national teams and two international matches played in 1971.

And while the women’s game is still growing worldwide, it has a long way to go. The latest comprehensive statistics from FIFA come from its “Big Count” in 2006. In it, women made up about 11 percent of registered soccer players worldwide, and just 13 percent of youths. While the Big Count hasn’t been updated, more recent studies haven’t suggested any major shifts, and FIFA still uses a figure of 12 percent in its literature.

What’s worse, even those numbers are being skewed — by the United States. In that same report, the U.S. had more than 1.5 million registered female youth players — more than half of the world’s total. Take all U.S. youth out of the equation, and just 8 percent of the young soccer players in the rest of the world were female in 2006.

Given that we pretty much started out on a similar playing field and have devoted more interest to women playing soccer in this country, I’m actually led to wonder why it is that we’re not even more dominant.

For example, Germany has probably the most robust network of young women playing soccer outside of the U.S. Per capita its network is about the same as America’s: The U.S. has about five times as many registered youth women’s players as Germany (based on the data in the FIFA country-by-country factbook), fitting well with a population difference of about 5x for 15-24-year-old females (judging by here and here).

If all else were equal, the U.S. should be smoking Germany: Both countries have similar youth participation rates, and we have five times more youths to draw on.

This isn’t the type of sports mystery that can be easily solved, but the best answer is probably something along the lines of “they take soccer more seriously.” And there are some pretty good hints of that in FIFA’s data: For example, 94 percent of all the FIFA-registered players in the U.S. are youths, compared with only 31 percent in Germany. In raw numbers, that means we have a little more than 100,000 relatively serious adult female players compared with Germany’s 650,000 plus. While I generally think youth or high school participation is a great proxy for potential talent pools, in this case I think the adult participation disparity tells you quite a bit about each country’s soccer culture. We may have the numbers advantage, but we don’t treat soccer as a national passion project.

At least not yet. Give us a couple more wins in Canada and we’ll see.

CLARIFICATION (July 1, 10:30 a.m.): The “rise of soccer” chart has been labeled to reflect that hockey includes both ice and field variants.