I didn’t care about the sweat pooling beneath my thighs in the 90 degree Pasadena sun; I hardly stayed seated anyway. We had woken up early to paint our faces and finish decorating our signs before loading into the family van to drive an hour north on the I-405 from my grandma’s house to the Rose Bowl. I trailed a few steps behind my older sister and her friends as we entered the stadium, marveling at the American flag popsicle vendors and 90,000-plus people chanting, ‘U-S-A! U-S-A!’

Tonight’s semifinal match between the United States and Germany is the greatest Women’s World Cup game of all time, according to our Women’s Soccer Power Index, which gives this game an average WSPI rating of 95.5. That’s the largest average WSPI of any two teams to ever play each other at a Women’s World Cup. By this measure, the 1999 final is only the eighth-greatest game of all time. 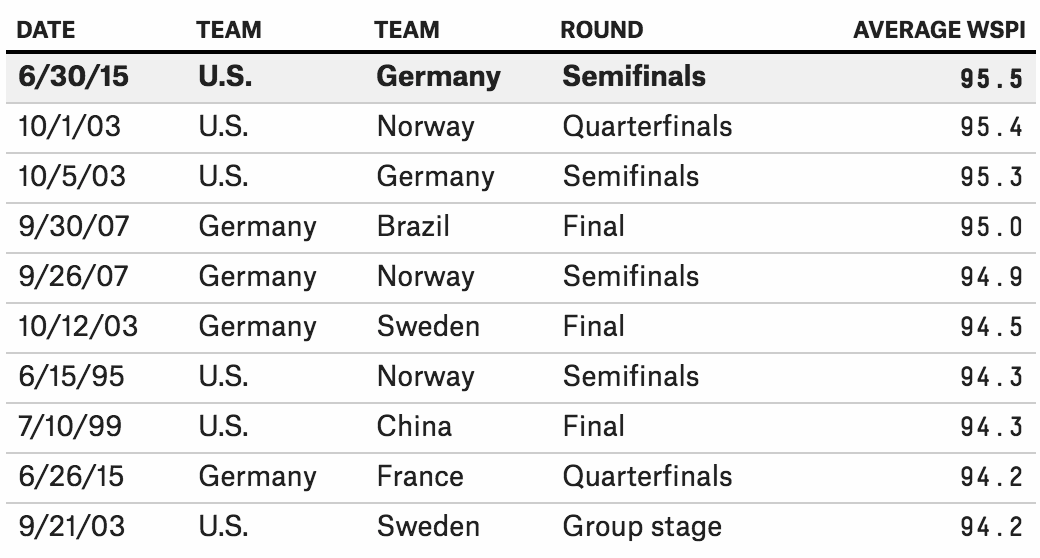 Either the U.S. or Germany — or both countries — has played in every one of the top 10 greatest Women’s World Cup games, and their 2003 World Cup semifinal encounter ranks third (Germany defeated the U.S. 3-0). Historically, when the U.S. and Germany have met at a World Cup, the winner has gone on to win the tournament. In both 1991 and 1999, the U.S. defeated Germany en route to its two championships, and in 2003, Germany routed the U.S. on its way to its first World Cup title. However, the two teams haven’t met at a World Cup in 12 years.

Germany is favored to win tonight’s game 57 percent to the Americans’ 43 percent, according to WSPI. As the Germans have advanced through the tournament, their chances of winning have risen to 43 percent, up 16 percentage points since the start of the World Cup. These odds come after a convincing Round of 16 win over Sweden and a quarterfinal victory against France, two of the tournament’s top teams. The U.S. has had a much easier (and less dominant) route to this semifinal match. The U.S. did not win very convincingly in either its Round of 16 game against Colombia or its quarterfinal game against China, and its chances of winning the World Cup are up only 2 percentage points since the tournament began.

Much of the criticism surrounding the U.S. team has been about its inability to create chances in the final third, but on Friday night against China, the U.S. created 13 chances — more than in any other of its games this tournament. The team was playing without two starting midfielders — Megan Rapinoe and Lauren Holiday, who were out because of accumulating yellow cards — and yet the team looked the sharpest it has all tournament, applying high pressure and winning the ball back immediately. The new players in the lineup provided fresh energy and offensive pressure; Amy Rodriguez made threatening runs forward and hustled all game, while Kelley O’Hara kept the width on the right side and got on the end of a few good crosses. But the question remains against Germany: Who and how will the U.S. decide to play?

Germany has been dominant all tournament long — especially in the final third, where the Americans have struggled. It has created almost double the number of chances as the U.S. — 94 compared with 50 — and its cohesive offensive power has been difficult for teams to contain. The tournament’s leading goal-scorers are two of Germany’s attackers, Célia Šašić and Anja Mittag, who have scored more goals apiece (six and five, respectively) than all the U.S. forwards combined. Together with attacking midfielder Dzsenifer Marozsan (who is questionable for tonight’s game because of an ankle injury), Germany has the tournament’s most indomitable, powerful attack.

But that doesn’t mean it will be easy for the Germans to score on the U.S., whose defense has also been the best of any team we’ve seen — allowing just one goal, in its first game against Australia. The center-back duo of Julie Johnston and Becky Sauerbrunn has been an impenetrable force field, shutting down most teams’ attacking flow before it can even begin. But the U.S. hasn’t faced an attack as balanced as Germany’s, and the Americans will have to rely on the midfield to help close gaps between the seams.

The midfield provides the biggest question mark for both the U.S. and Germany, and it’s likely that whoever has the better midfield organization will control the game and create more offensive opportunities. It’s doubtful that the U.S. will try to match up with Germany’s 4-2-3-1 formation and play with three central midfielders, but much of its success against China came from designating Morgan Brian as a holding mid, allowing Carli Lloyd to get forward and score the game winner. Rapinoe will likely return to the left side. But head coach Jill Ellis has started five different players at right midfield, and that spot could go to any of them, including Tobin Heath, Christen Press or O’Hara.

Both teams will be playing to keep the dream of a third World Cup title alive, and it’s bound to be an epic battle. Maybe there won’t be 90,000 people in the stands or 90 degree temperatures on the field, but you can bet there will be patriotic face paint and a 26-year-old in the crowd feeling like she’s 10 again.