Wal-Mart’s plan to raise its employees’ pay is the latest evidence that the improving U.S. economy may at last be trickling down to low-wage workers.

The retail giant announced Thursday that it would pay all its workers at least $9 an hour starting in April and that it would raise the wages of about a third of the company’s 1.4 million U.S. workers. The move follows similar announcements from Aetna, Starbucks and other big employers.

Individual announcements are only anecdotes. Companies have an incentive to publicize pay increases; they’re a lot less likely to make a big deal when they cut wages or leave them flat. That may be especially true at a time when members of both political parties are talking more about inequality, and when efforts to raise the minimum wage are gaining momentum across the country. It’s possible Wal-Mart and its peers are hoping that small, voluntary pay raises will dampen efforts to force the issue through legislation or unionization.

But government data provides at least preliminary evidence that low-wage workers really are making gains. According to the Bureau of Labor Statistics, the biggest wage gains over the past year have been in the lowest-paying industries, those with average earnings of $15 an hour or less for non-managers. In the last three months of 2014, hourly earnings in those sectors were up 2.5 percent from a year earlier, about the same rate of increase as for workers in high-paying industries and significantly better than the gains posted by industries in the middle.1 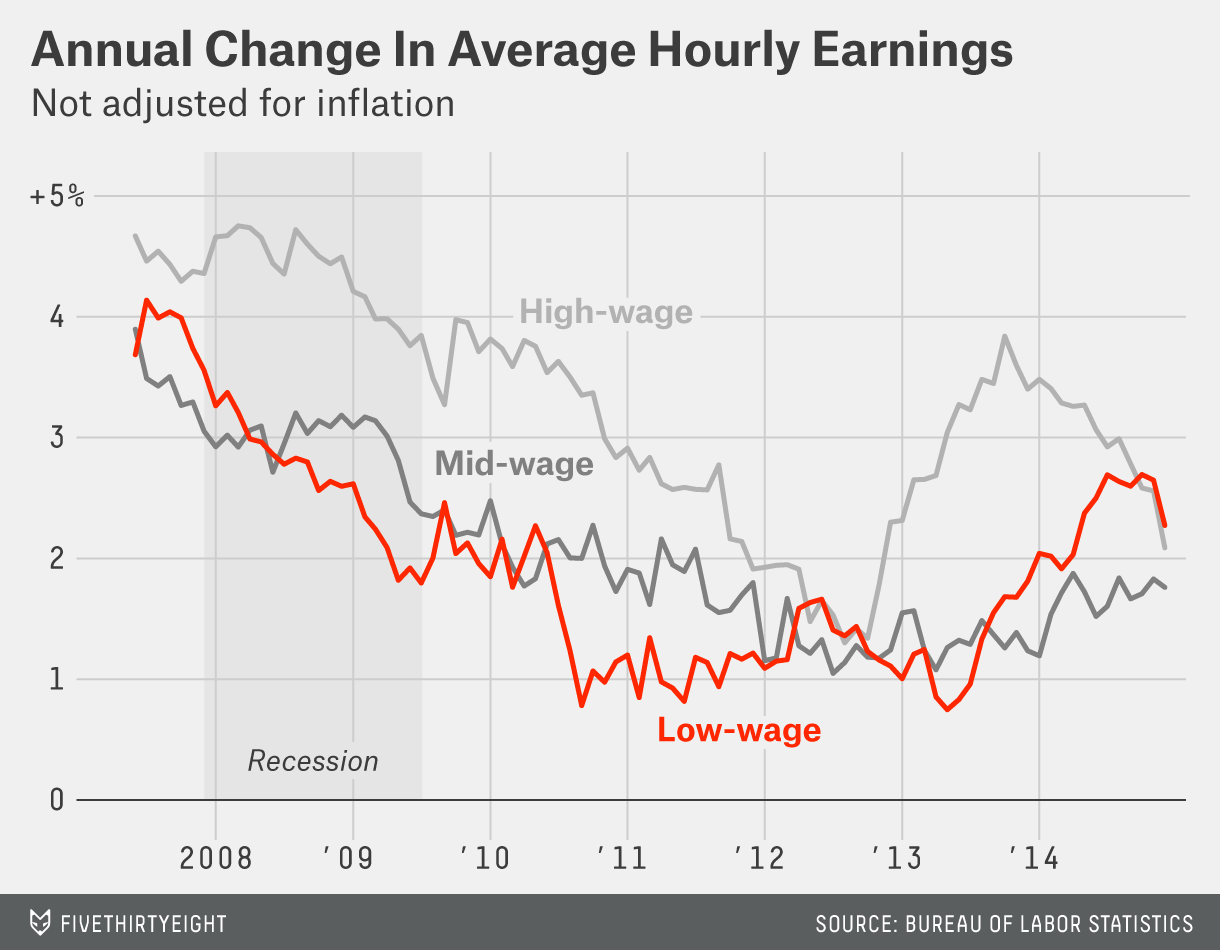 Other sources tell a similar story. A recent analysis of Current Population Survey data from the Federal Reserve Bank of Atlanta found that the fastest wage growth in 2014 came among groups that tend to be among the lowest paid: younger, less-educated and part-time workers, as well as those in service occupations. A separate analysis of the same data from the left-leaning Economic Policy Institute (EPI) released Thursday found that the lowest-earning workers were the only ones to see inflation-adjusted wage gains in 2014. (All these calculations are through December, before minimum-wage increases took effect in 20 states in January.) 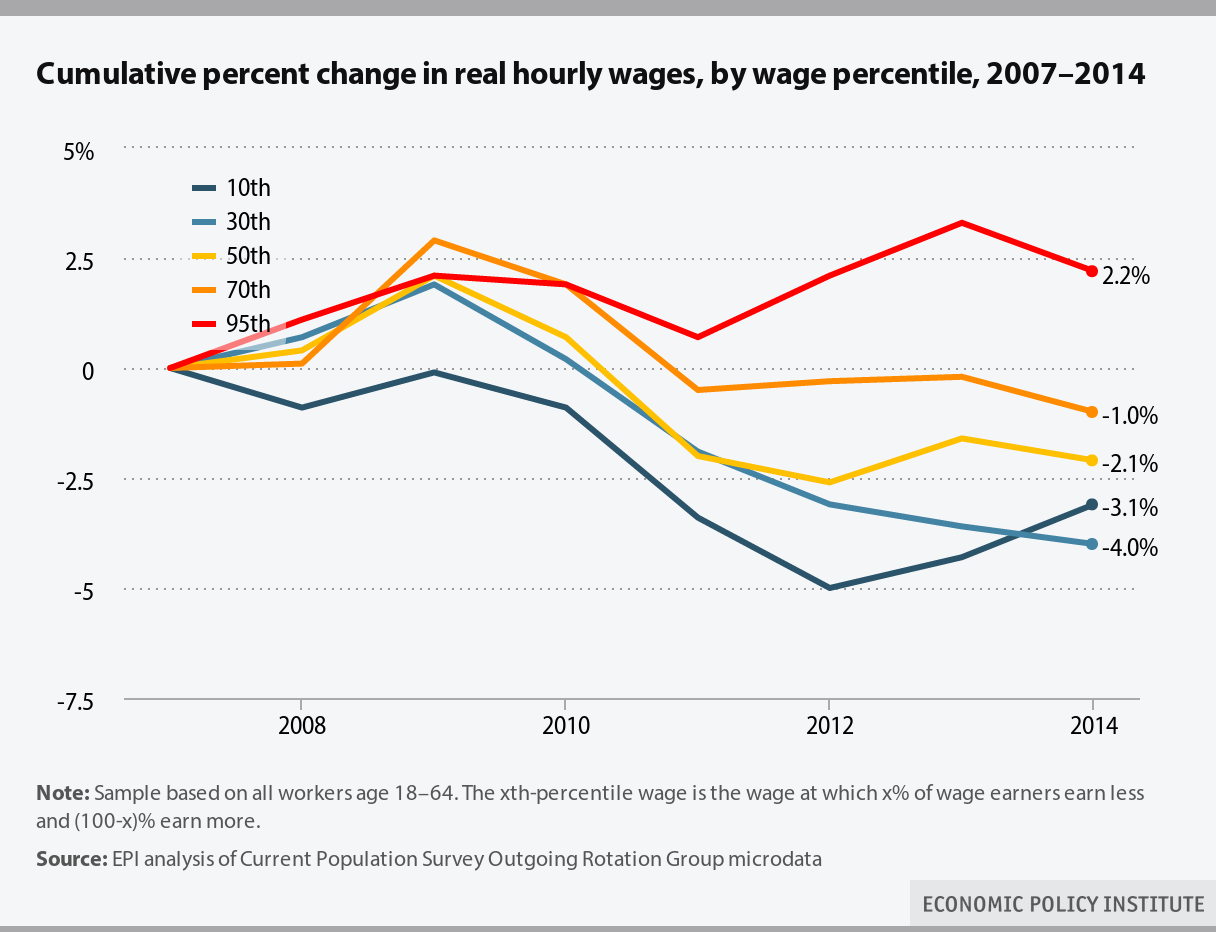 To be clear, low-wage workers are still struggling. They are earning less than they were before the recession, after adjusting for inflation — the only group that’s earning more, according to the EPI analysis, are the richest 5 percent of workers — and the raises they’re seeing now are small compared to the ones they were used to before the crisis. In other words, low-wage workers fell behind in the recession and still aren’t catching up. In a statement released Thursday, EPI Research Director Josh Bivens said the excitement over Wal-Mart’s announcement “shows just how far we have to go before we have an economy that is genuinely working for most Americans.”

Still, it’s significant that earnings are rising for low-wage workers at all, because their earnings are especially sensitive to the state of the economy: When unemployment is high, it’s easy for companies to replace low-skilled employees rather than offer them raises. Wal-Mart’s decision to offer higher wages could be a sign that the company is having trouble attracting workers now that the economy is gaining steam.

On the one hand, pay increases shouldn’t be surprising. The unemployment rate has fallen rapidly over the past year, and the ratio of job seekers to job openings is nearly back to its prerecession level. With more companies competing over fewer workers, we would expect to see wages rise. On the other hand, there’s been pretty much no meaningful acceleration in overall earnings, and middle-class workers don’t seem to be experiencing the same bump in earnings that low-wage workers are. In January, I argued that what happened to wages would be the true test of the recovery in 2015; it’s still much too soon to conclude the economy has passed that test. 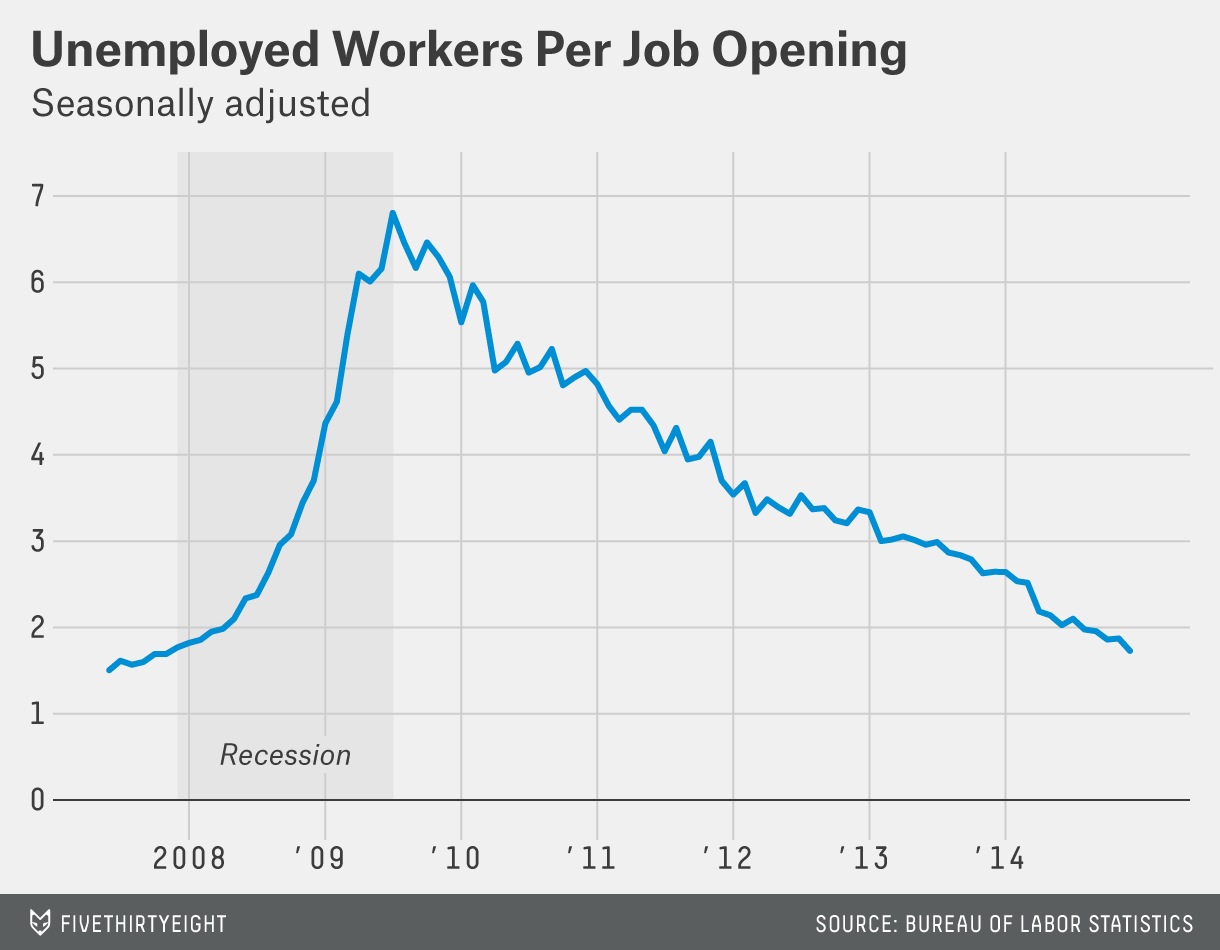