It’s official: Amy Coney Barrett will be the country’s next Supreme Court justice. She was confirmed by a 52 to 48 vote margin, and will be sworn in by Justice Clarence Thomas at the White House tonight — just in time for Election Day.

Barrett’s ascension to the court was incredibly swift — her confirmation hearings started less than a month after Justice Ruth Bader Ginsburg’s death, and this is the closest to an election a Supreme Court confirmation vote has been held. Notably, though, despite this accelerated timeline, Barrett emerged relatively unscathed from her confirmation hearings. This is quite a feat considering both the partisan nature of the hearings and the looming questions over whether the rush to confirm her jeopardizes the court’s legitimacy.

Barrett’s confirmation is incredibly consequential, too, as she will likely shift the center of gravity away from Chief Justice John Roberts and toward the right edge of the court’s conservative wing, which could potentially result in rulings that are significantly outside the mainstream of public opinion.

We won’t have to wait long to see how Barrett rules, either. She faces a slew of hot-button cases right off the bat, including a dispute over religious liberty exemptions, a challenge to the Affordable Care Act and several cases involving controversial Trump administration policies — not to mention any election-related fights that make their way to the court in the next few weeks, plus the fact that Mississippi recently asked the Supreme Court to consider its 15-week abortion ban, which directly challenges Roe v. Wade.

Why Barrett is poised to remake the Supreme Court

As we’ve written before, it’s hard to know exactly how a nominee to the Supreme Court will rule until they’re actually sworn in and begin weighing in on cases. But we do have data on Barrett’s three years as a judge on the 7th U.S. Circuit Court of Appeals, and as you can see in the chart below, she was very conservative. 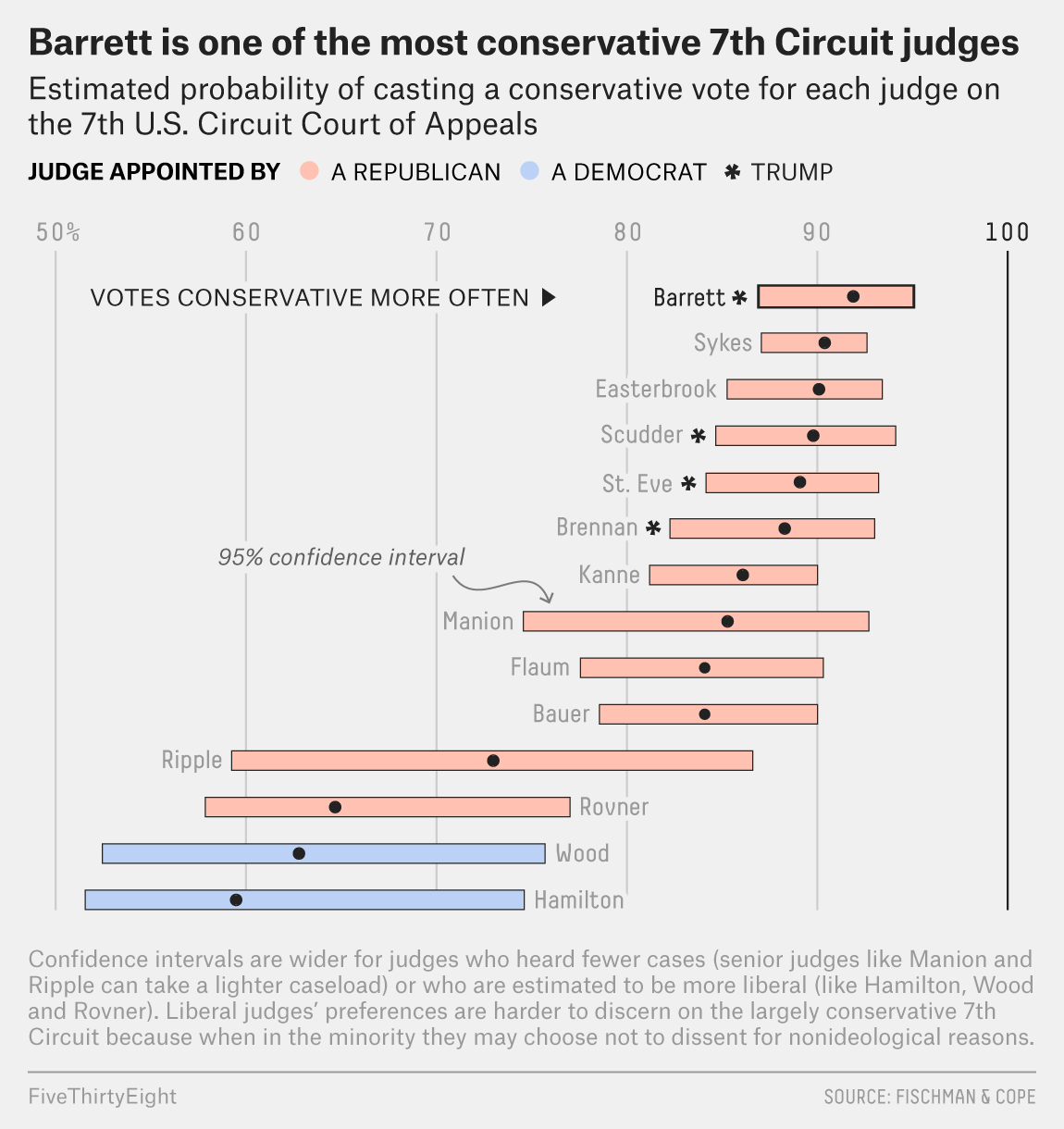 We looked at two separate analyses of her record on the court this month, and we found whether it was in regular opinions or in special en banc decisions in which the entire appeals court ruled together, she was consistently on the right-most edge — if not the most conservative judge on the bench. And she was especially likely to rule in a conservative direction on civil rights issues.

Those findings underscore the idea that Barrett is likely to be a reliable conservative vote on the court. And her confirmation is even more significant because she’s replacing one of the court’s stalwart liberals. If Barrett ends up being ideologically similar to Justice Samuel Alito, who is currently the second-most conservative justice on the Supreme Court, her replacement of Ginsburg could be one of the biggest ideological swings in modern court history.

In this scenario, Justice Brett Kavanaugh would replace Roberts as the court’s new median justice, which could lead to a significant rightward turn on the court, as Roberts is often the lone conservative justice to side with the liberals. He has cast several recent pivotal votes with the liberals, too, including a dispute in which the justices deadlocked 4-4 on whether to halt a Pennsylvania Supreme Court decision that allowed state officials to count ballots that arrive up to three days late. With Barrett on the court, though, Roberts would lose that “swing justice” role.

In the short term, that means election-related cases could have very different outcomes — even including a new iteration of the Pennsylvania case, which Republican officials recently brought back to the court. And in the long term, conservative legal advocates may respond by bringing even more ambitious cases, questioning long-held precedents.

The idea of confirming anyone to replace Ginsburg before the election was quite unpopular only a few weeks ago. While it’s true that most Supreme Court confirmation hearings are pretty partisan these days, around the time Barrett was named as the nominee, a majority of Americans said they wanted the winner of the election to choose the next justice. And polling by the Economist in mid-October also found that Barrett was the most unpopular nominee in Supreme Court history.

Now, though, Americans may actually have warmed to the idea of Barrett joining the court before Election Day. According to tracking polls by Morning Consult, support for confirming Barrett rose from 37 percent when she was nominated to 51 percent after the hearings were over and a Gallup poll conducted during Barrett’s confirmation hearings found a similar result. Notably, according to that Gallup poll, this was substantially higher than the share who wanted the Senate to confirm Justice Brett Kavanaugh in 2018 (41 percent), and is even slightly higher than the support previous nominees since 1987 have received on average (48 percent).

To be sure, this isn’t universal support for Barrett’s confirmation. Partisan opinion on her confirmation is really divided — according to Gallup, only 15 percent of Democrats wanted the Senate to vote to confirm her, for instance. A deep partisan divide in support isn’t a good sign for the court in general either, as it can reinforce perceptions that the court is itself a partisan institution. But Barrett could have emerged a lot less popular from her hearing — which is why the level of support she does enjoy is pretty notable, especially when you consider most Americans agreed that she’d push the court to the right (54 percent in that Morning Consult poll).

FiveThirtyEight Politics Podcast: How the electorate will be different in 2020

Barrett will be faced with highly controversial cases immediately

Barrett could be immediately faced with tough decisions, too, including voting on the fate of ballot deadlines in several states. There are a number of important or even precedent-altering cases at stake, too, and considering that the Roberts court has already been overturning more precedents with slim 5-4 majorities than any other court in modern history, that trend could further accelerate with Barrett on the court.

The day after the election, for instance, the justices will hear a case in which they’re being asked to reconsider a 30-year-old religious liberty precedent. In that case, the justices will consider whether that precedent makes it too hard for religious people to sue for exemptions. The majority opinion in that precedent-setting case, Employment Division v. Smith, was actually written by the late conservative Justice Antonin Scalia, but four of the current conservative justices have already signaled they may be willing to strike it down. Barrett could overrule it, and make it much easier for nondiscrimination provisions to be challenged by religious litigants.

And a week after the election, a case involving the constitutionality of the Affordable Care Act will come before the court, in which the justices could declare the entire law invalid. Another important signal will be whether Barrett’s presence on the court gives conservatives a fourth vote to hear a case involving Mississippi’s 15-week abortion ban, which the state attorney general described as an “ideal vehicle” for “clarifying” how the court’s precedents on abortion should be interpreted. There are also several important Trump administration policies on the docket a little later this term — including the administration’s attempt to exclude undocumented citizens from the census count used for redistricting, and whether Trump unconstitutionally commandeered Congress’s power when he diverted Defense Department funds to expand the border wall with Mexico. Given that several recent Supreme Court decisions on Trump administration policies — including an attempt to add a question about citizenship to the 2020 census — split 5-4, with Roberts casting a deciding vote with the liberals against the Trump administration, Barrett’s presence on the court could make a decision in favor of Trump more likely.1

Barrett made it through her confirmation hearings mostly without controversy, but we’ll see whether that lasts. It won’t take long to get a sense for just how far the Supreme Court’s conservatives are willing to go now that they hold a decisive majority for the first time in decades.