The death of Justice Ruth Bader Ginsburg opened up a rare vacancy on the U.S. Supreme Court, and Republicans are moving quickly to fill the seat. President Trump says he will nominate a replacement for Ginsburg on Saturday, and Senate Majority Leader Mitch McConnell has pledged a vote on the nominee this year. (And it looks as if he might have the votes to confirm her.) But polling conducted in the wake of Ginsburg’s death shows that this may be an unpopular decision.

We’ve identified 12 polls so far that have asked some version of the question, “Should Ginsburg’s seat be filled this year by Trump, or next year by the winner of the 2020 presidential election?” And on average, 52 percent of respondents have said to wait, while only 39 percent have said Trump should fill the seat now.

If that split sounds familiar, that’s because it closely echoes both polls of Trump’s approval rating (43 percent approval vs. 53 percent disapproval, on average) and national horse-race polls between Trump and Joe Biden (which average out to Biden 50 percent, Trump 43 percent).1

In other words, partisanship is probably driving people’s opinions of when the Supreme Court vacancy should be filled. You also saw this in the crosstabs of almost every poll this week: On average, 78 percent of Republican respondents said Trump should fill the vacancy now, while 84 percent of Democratic respondents said it should be up to the winner of the election. (This is a reversal from 2016, when Democrats generally believed then-President Obama should have been allowed to fill Justice Antonin Scalia’s seat, while Republicans supported having the winner of the election decide.)

But this issue is also a great example of when question wording can really affect the results of a poll. For example, Americans felt differently about whether Trump should appoint a replacement and whether the Senate should confirm her if he does. For example, registered voters told YouGov by a 51 percent to 42 percent margin that Trump should not appoint a new justice, but they were more divided when asked, “If President Donald Trump appoints a new Supreme Court Justice before the presidential inauguration in January 2021, do you think the U.S. Senate should confirm the nominee?”: 45 percent said yes, 48 percent said no. Similarly, Global Strategy Group/GBAO/Navigator found that registered voters thought 56 percent to 36 percent that the winner of the election should be responsible for nominating Ginsburg’s replacement — but when asked what they thought what should happen if Trump nominates someone anyway, 42 percent thought it would be right for the Senate to vote on the nominee, while 47 percent thought it would be wrong.

In addition, some polls asked if Ginsburg’s seat should be filled before Election Day (Nov. 3), while others asked if it should be filled before inauguration day (Jan. 20). And while many voters would prefer to wait until after the election, that doesn’t mean they necessarily oppose Trump naming a nominee. In the SurveyMonkey/Insider poll, 45 percent of registered voters agreed that “whoever wins the election should appoint the next justice, and the Senate should not vote until the election is decided,” while 28 percent said the Senate should confirm her “as soon as possible, before the 2020 election.” But another 13 percent said it should happen “after the 2020 election but before the next inauguration, regardless [of whether] President Trump wins or loses.” So that suggests that 58 percent of voters want to wait until after the election, but that 41 percent of voters want Trump to be the one to fill the seat.

Relatedly, Reuters/Ipsos returned two seemingly contradictory findings: First, 62 percent of adults (including 49 percent of Republicans) agreed with the statement, “The winner of the election should be able to appoint Ruth Bader Ginsburg’s replacement on the Supreme Court.” (Only 24 percent disagreed.) But the pollster also found that respondents agreed, 46 percent to 40 percent, with the statement, “President Donald Trump should nominate a replacement for Ruth Bader Ginsburg before his term ends.” It could be that Americans acknowledge Trump’s right to nominate a replacement but don’t want to see her confirmed until we know the results of the election. Or it could be that many Republicans believe Trump will be the winner of the election, so the two statements aren’t contradictory to them.

Another good example of how question wording might have affected people’s answers came from The Economist/YouGov, which asked, “Do you think Donald Trump should nominate someone to fill the vacancy, or should the seat remain vacant until a new president takes office in January 2021?” Referring to the seat as “remain[ing] vacant,” rather than saying that winner of the election would fill it, might have emphasized to respondents that the Supreme Court would be understaffed for at least four months in this scenario; the use of the phrase “new president” might also have implied “not Trump.” That could explain why this was one of the best polls for McConnell and Trump: Respondents supported waiting to fill the seat by only a 46 percent to 41 percent margin.

Overall, it seems clear that forging ahead with the confirmation process now is somewhere between a mildly unpopular decision and a very unpopular one. But it’s unclear whether it will actually hurt Republicans at the ballot box. As I wrote on Tuesday, only 5 percent of registered voters told SurveyMonkey/Insider that the Supreme Court vacancy made them less certain of their vote, and a plurality of respondents told Reuters/Ipsos that it would have no impact on their presidential vote.

And although the choice of who succeeds Ginsburg is important to many Americans — “very important” to 52 percent of them and “somewhat important” to 23 percent, according to The Economist/YouGov — it might not be as important as the other issues they were already basing their vote on. According to the HuffPost/YouGov survey, only 21 percent of voters said the Supreme Court is one of their top three issue priorities — well behind the economy (42 percent), the coronavirus (41 percent) and health care (34 percent). 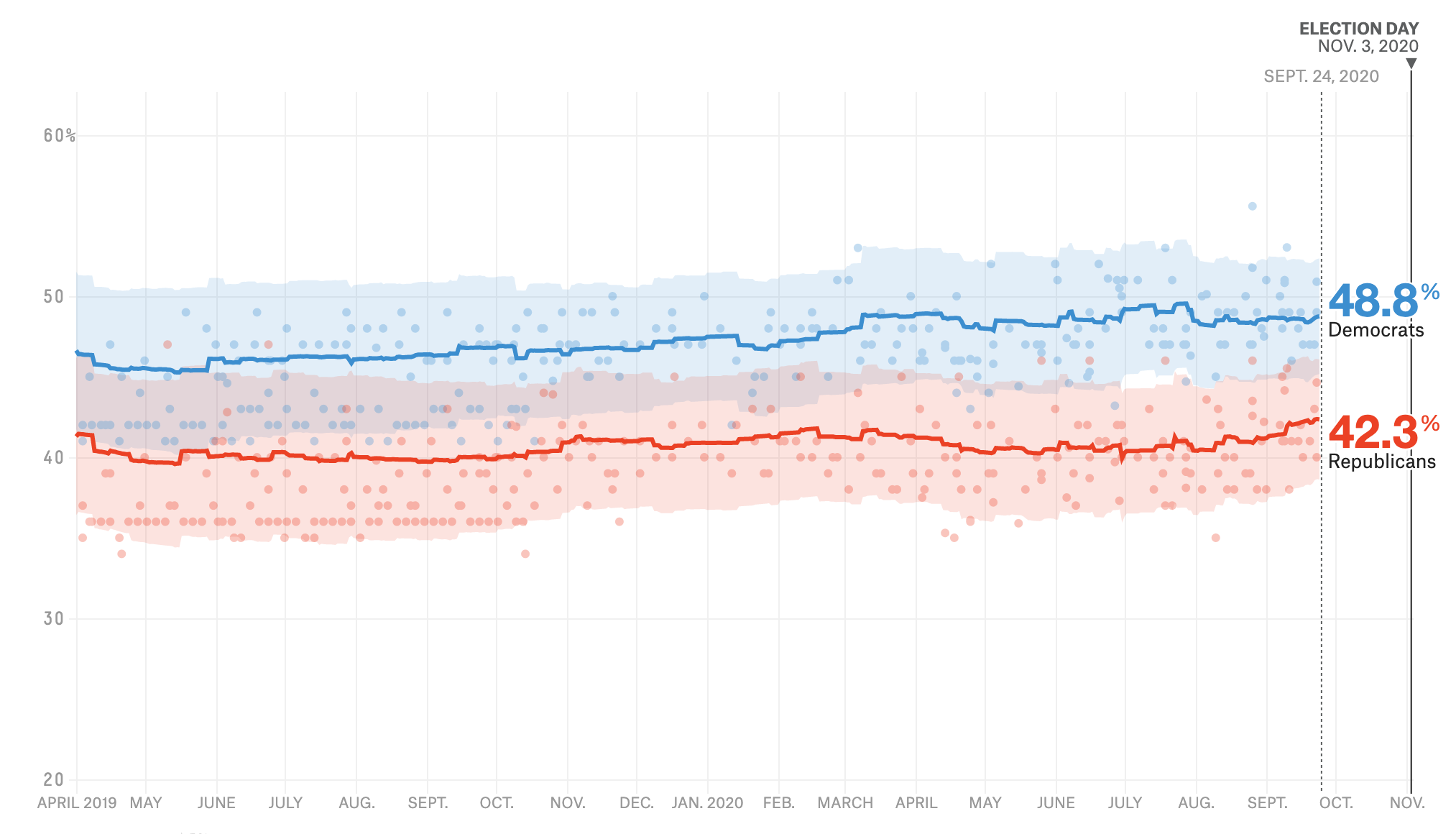