President Trump’s third nominee to the Supreme Court is Amy Coney Barrett. The nomination process is moving ahead at warp speed, and the court is that much closer to having a 6-3 conservative majority.

The historic nature of this nomination is abundantly clear. If Barrett is confirmed, the Supreme Court could be the most conservative it’s been in 70 years. But what does that mean for the way the justices rule going forward?

It’s hard to predict how any given nominee will rule once serving on the bench. But we do know that the chances of “a conservative revolution” on the court are high. It’s not just that the liberals are losing a key justice or that the conservative balance of power is about to lurch to the right. It’s that the types of cases the court will hear are about to dramatically change, too.

Ultimately, we don’t know whether the conservative majority will rush to strike down or hollow out long-standing liberal precedents like Roe v. Wade. But Supreme Court experts did stress that we’re likely to see the legal conservative movement seize this moment, and as such, we should brace for a wave of rulings that move the law fundamentally to the right — on everything from hot-button cultural issues like gun rights and abortion to more legalistic, but nevertheless important, topics like the power of the executive branch.

And, for the first time in decades, there won’t be a single swing justice with the power to tip a controversial decision one way or the other. Instead of Chief Justice John Roberts single-handedly deciding which way the court will swing on a given ruling, it will require two conservative justices to stop the court from taking a hard right turn on any given issue. And at this point, it’s not clear who that second conservative justice might be.

The liberals have lost their most powerful dissenter

The most immediate impact of Justice Ruth Bader Ginsburg’s death is that the liberal wing of the court has lost a seat, and the court’s left-leaning justices, who have spent the past 10 years trying to wield what power they can as a minority bloc, are now in an even weaker position. But Ginsburg also had a distinctive legal voice and long history as an advocate for gender equality, significantly reshaping this area of the law.

And among the four Democratic-appointed justices who have been on the court together since 2010, Ginsburg was one of the most reliable and prominent liberal voices. She already was a seasoned Supreme Court veteran by that point and had established herself as a solid liberal vote, particularly in cases involving civil rights, unions and the rights of criminal defendants.

But she became a liberal superstar in the last decade of her life for another reason: her dissents. Ginsburg’s dissenting opinion in Shelby County v. Holder, in which she wrote that the decision by five GOP-appointed justices to invalidate a key section of the Voting Rights Act of 1965 was like “throwing away your umbrella in a rainstorm because you are not getting wet,” earned her the moniker the Notorious RBG and with it, a place on tote bags and coffee mugs in liberal homes across the country.

That reputation as an ardent dissenter was well earned: By the time of her death, Ginsburg had the highest dissent rate in close cases of any Supreme Court justice since Thurgood Marshall. Although in a sign of just how conservative and polarized the court has already become, she is not that far ahead of the other liberal justices still on the court.

The symbolic power of Ginsburg’s dissents also served a practical purpose, according to Lee Epstein, a political scientist at Washington University in St. Louis who studies the Supreme Court. “Her dissents may have forced the majority to think hard about its decision and to respond to her dissents,” Epstein said. But more importantly, she said that they called attention to the majority’s decision and set a marker for a different outcome — either by a future court or Congress.

One of Ginsburg’s fieriest dissents was in 2007, when a five-justice, all-male majority ruled that Lilly Ledbetter, a female employee of Goodyear Tire & Rubber Company, couldn’t sue the company for 19 years of gender-based pay discrimination because she had filed her suit more than 180 days after the first instance of discrimination. Ginsburg delivered her dissent aloud from the bench, accusing her colleagues of either ignoring or failing to comprehend the “insidious” nature of pay discrimination, and called on Congress to act. It worked. Two years later, Congress passed the Lilly Ledbetter Fair Pay Act of 2009, which changed the statute of limitations so that fair-pay cases could be filed within 180 days of the last paycheck in which discrimination occurred.

“Dissents can be a powerful thing, particularly if you’re stuck in the minority for a long time, as Ginsburg was,” Epstein said. “It was her way of defending left-leaning legal regimes on a very conservative Republican court.”

With Ginsburg’s death, the other liberal justices — especially Sonia Sotomayor, the most left-leaning justice on the court — may feel the need to step into the role of dissenter in chief.

The conservative wing will no longer need Roberts

Ginsburg’s death also means a huge loss of power for Roberts. For the first time in decades, there will be no swing justice poised to decide whether the liberals or conservatives will prevail in close cases. According to our analysis from earlier this year, Justice Brett Kavanaugh will probably be the new median on the court, assuming the new justice falls to his right, and that means the center of gravity within the conservative wing will shift dramatically — especially if the new justice is closer ideologically to Samuel Alito and Clarence Thomas, the court’s two most right-leaning justices.

One way to think about what the court could look like is to revisit some of the recent 5-4 decisions in which Roberts cast a deciding vote with the liberals — decisions that presumably would have gone the other way with Kavanaugh as the new median. Just this past term, Roberts joined the liberals in a high-profile abortion case involving a Louisiana law that was nearly identical to a Texas restriction struck down by the court in 2016. Roberts wrote in his concurring opinion this summer that he still thinks the 2016 case was decided incorrectly, but, at the same time, he said he wasn’t willing to undo the precedent it set. The other four conservatives, on the other hand, were perfectly ready to start rethinking fundamental aspects of the court’s approach to abortion rights.

Tom Clark, a political scientist at Emory University, said that with any new Trump nominee on the court, he expects the conservatives to quickly start allowing a much wider range of restrictions on abortion. But he cautioned that even with a sixth conversative on the court, he wasn’t sure the Supreme Court would go as far as to say, “We’re throwing out the principle that you have the right to get an abortion,” adding “[T]hat would be an extremely radical move.” He thinks, however, that the court will permit Republican-controlled states to erode abortion access much more rapidly than Roberts was willing to tolerate.

If Trump wins a second term, his administration will also be free of a major roadblock in Roberts. Last year and this year, Roberts joined the liberals in two cases involving major Trump administration policies — the attempt to add a citizenship question to the 2020 census and the attempt to rescind Deferred Action for Childhood Arrivals, the Obama-era program that grants certain young undocumented immigrants temporary permission to remain in the country legally. Roberts wrote the majority opinion in both cases and drew on similar reasoning, arguing that while the Trump administration might have the power to include an extra question on the census or cancel a previous president’s executive order, they didn’t follow the laws governing executive agencies. The other conservatives didn’t see that as a violation of the law, though — which means that Trump policies might have an even friendlier audience at the Supreme Court in the future.

It’s possible, of course, that Roberts will continue his campaign of moderation and try to persuade one of the conservatives to join him and the liberals in cases where he thinks his fellow GOP appointees are going too far. Kavanaugh and Justice Neil Gorsuch are both possible candidates for that kind of defection — especially Gorsuch, who did vote with Roberts and the liberals this year in a case involving workplace discrimination against homosexual and transgender employees. 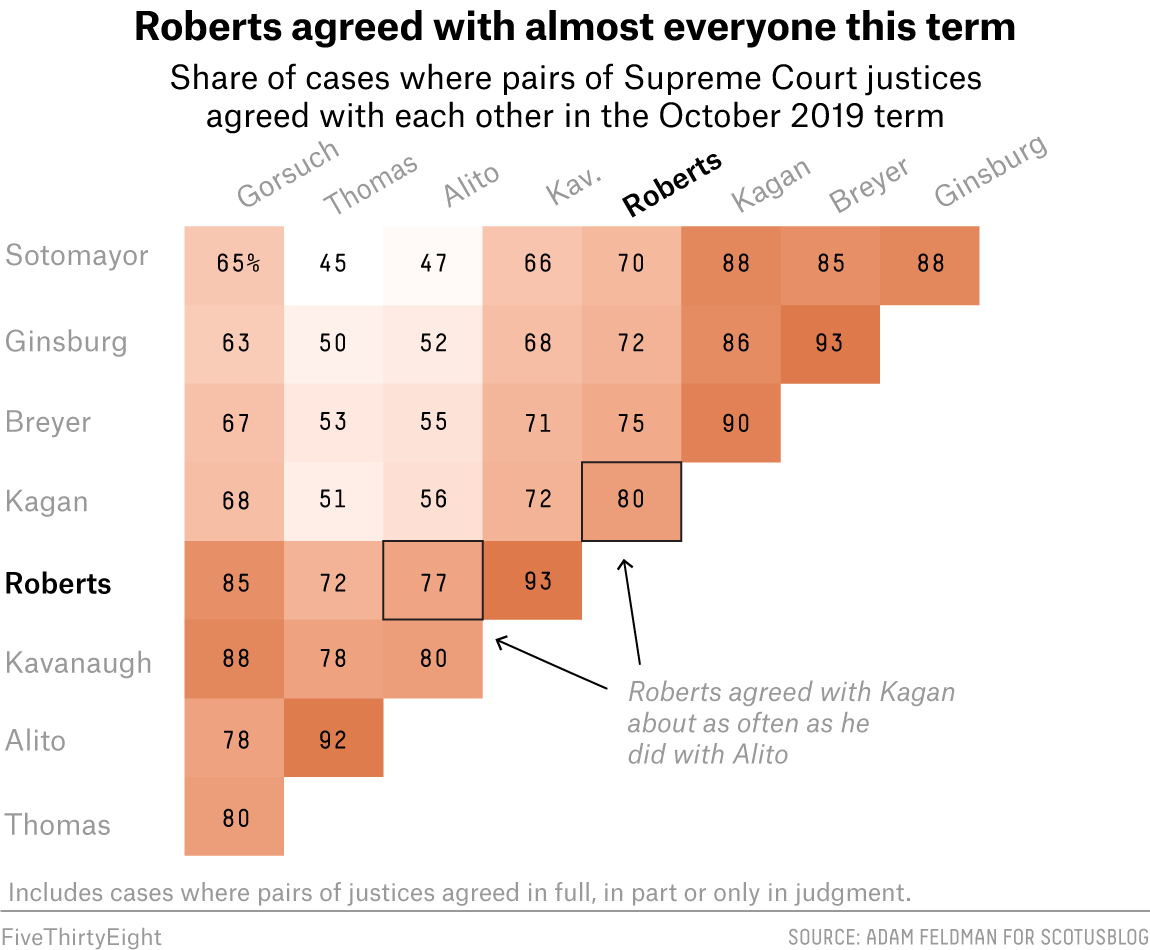 Roberts does retain one big, important power, though. As chief justice, he can assign who writes the opinion in any case where he’s in the majority. That might make for a change in strategy for him, however. Instead of trying to bridge the divide between the left and right, Roberts might side with his fellow conservatives more often, as it would enable him to claim the opinion in cases where he wants to rule as narrowly as possible.

Precedents could be in much greater danger

Even before Ginsburg’s death, the Roberts court was overturning precedents with more narrow 5-4 majorities than any other modern court in Supreme Court history — and those rulings usually went in a conservative direction.

Now, that seems likely to accelerate. And not just because the conservative majority may be open to overturning precedents. Lower courts, legal advocates, and state legislatures all calibrate their actions, at least to some extent, based on how far they think the Supreme Court is willing to go.

Some anti-abortion legal advocates, for example, have deliberately adopted a more incremental strategy up until now, in part because they thought it was unrealistic that the Supreme Court would overturn Roe v. Wade outright. “That kind of incrementalist thinking will be out the window,” said Leah Litman, a law professor at the University of Michigan.

Meanwhile, the Supreme Court largely responds to the arguments that are brought to its doorstep, and at least one study has indicated that the justices may be more likely to overturn precedent when they’ve been asked to do so explicitly.

This kind of pressure outside the court is hard to measure and quantify — after all, there’s no way of knowing what kinds of laws or cases would end up at the Supreme Court if Ginsburg weren’t being replaced, most likely by a conservative. But it’s important to understand, nonetheless. Because even before Ginsburg’s death, there were signs that Trump’s previous nominations had emboldened conservative advocates to challenge precedents that used to seem untouchable, like a case this term which asks the court to reconsider a 1990 decision about religious exemptions written by former Justice Antonin Scalia, which many conservatives now regard as flawed because it allows the government to impose some restrictions on religious practices.

However, we might be surprised by where the court goes next or where fissures emerge among the GOP-appointed justices. The legal landscape is about to change dramatically, so while some in the conservative legal movement might be eager to prioritize and move forward quickly on particular issues, others might disagree.

Finally, all Trump’s nominees could turn out to be wildcards, at least some of the time — even Barrett. “The conservative legal movement may be very eager to get a certain person on the court, but once that person is there, they can do what they want and the Federalist Society can’t fire them,” Epstein said. “So we’ll just have to see what happens. When the center of the court moves right, will the justices feel like, ‘You know what, there’s nothing stopping us, we’re going to plow ahead’? That might very well happen. But they might also get a little cautious.”