’Tis the season, apparently, for late entries into the presidential race. On Thursday, former Massachusetts Gov. Deval Patrick threw his hat into the ring after reportedly being underwhelmed by the current field. And former New York City Mayor Michael Bloomberg filed to run in the Alabama Democratic primary one week ago today, followed by the Arkansas primary on Tuesday (although he has still not made a final decision to enter the race).

Of course, both men’s last-minute entries mean they’ll face uphill climbs in a contest where many other contenders have struggled to break out, and they’ll have to play catch-up quickly in building relationships and campaign infrastructure, which other candidates have had almost a year to do. We’ll have to wait a few more days to get data on just how difficult this climb might be for Patrick, but a few polls released this week showed just how hard things might be for Bloomberg.

Shortly after news broke that Bloomberg might run, Morning Consult ran a quick poll that found he would pull 4 percent of the national primary vote. That’s about where he was polling before he initially said he wouldn’t run, back in March: not terrible, but hardly strong enough to pose a serious threat. And even though Bloomberg’s advisers have said he would actually skip the first four primary states if he runs — a truly unorthodox strategy — two early-state polls that also asked about him this week found that he barely registered there. Only 2 percent of likely Democratic primary voters in New Hampshire told Quinnipiac that they would “definitely vote” for Bloomberg, although an additional 37 percent did say they would “consider voting” for him. And in a Monmouth poll of Iowa, Bloomberg earned the support of less than 1 percent of likely Democratic caucusgoers.1

And it might be especially hard for Bloomberg to increase his support considering his lackluster favorability numbers. In that Morning Consult poll, his favorable rating was 31 percent and his unfavorable rating was 25 percent. That doesn’t sound bad at first, but that’s among Democrats, who normally love other Democratic politicians. (To take just one example, Sen. Cory Booker was at 43 percent favorable, 12 percent unfavorable in the same Morning Consult poll.) And two other polls don’t even have Bloomberg in positive territory with members of his own party. A YouGov/Economist poll this week gave him a 34 percent favorable rating and a 36 percent unfavorable rating among Democratic primary voters nationwide. And that Monmouth poll found that just 17 percent of Iowa Democrats viewed him favorably, while 48 percent viewed him unfavorably!

And while maybe some Iowa Democrats have a particularly unfavorable opinion of Bloomberg because his staff has said he would ignore early states if he runs, his national numbers aren’t all that different from when I looked at 2020 contenders’ favorability numbers back in February. According to an average of favorability polls from the first five weeks of the year, Bloomberg had a net favorability (favorable rating minus unfavorable rating) of just +11, which was the worst in the Democratic field once you accounted for name recognition. And as I wrote at the time, it’s really hard to win your party’s presidential nomination if you start off the campaign as well known and poorly liked as Bloomberg was (and is). Only one candidate has done so at least since 1980, according to our research, and that’s President Trump. But even Trump had turned his image around by this point in the campaign; according to ABC News/Washington Post polling, he went from a -42 net favorability among Republicans in May 2015 to +28 in September 2015. Bloomberg, on the other hand, has arguably missed his chance to improve his own numbers by sitting out most of the year, so he is in an even more difficult position. 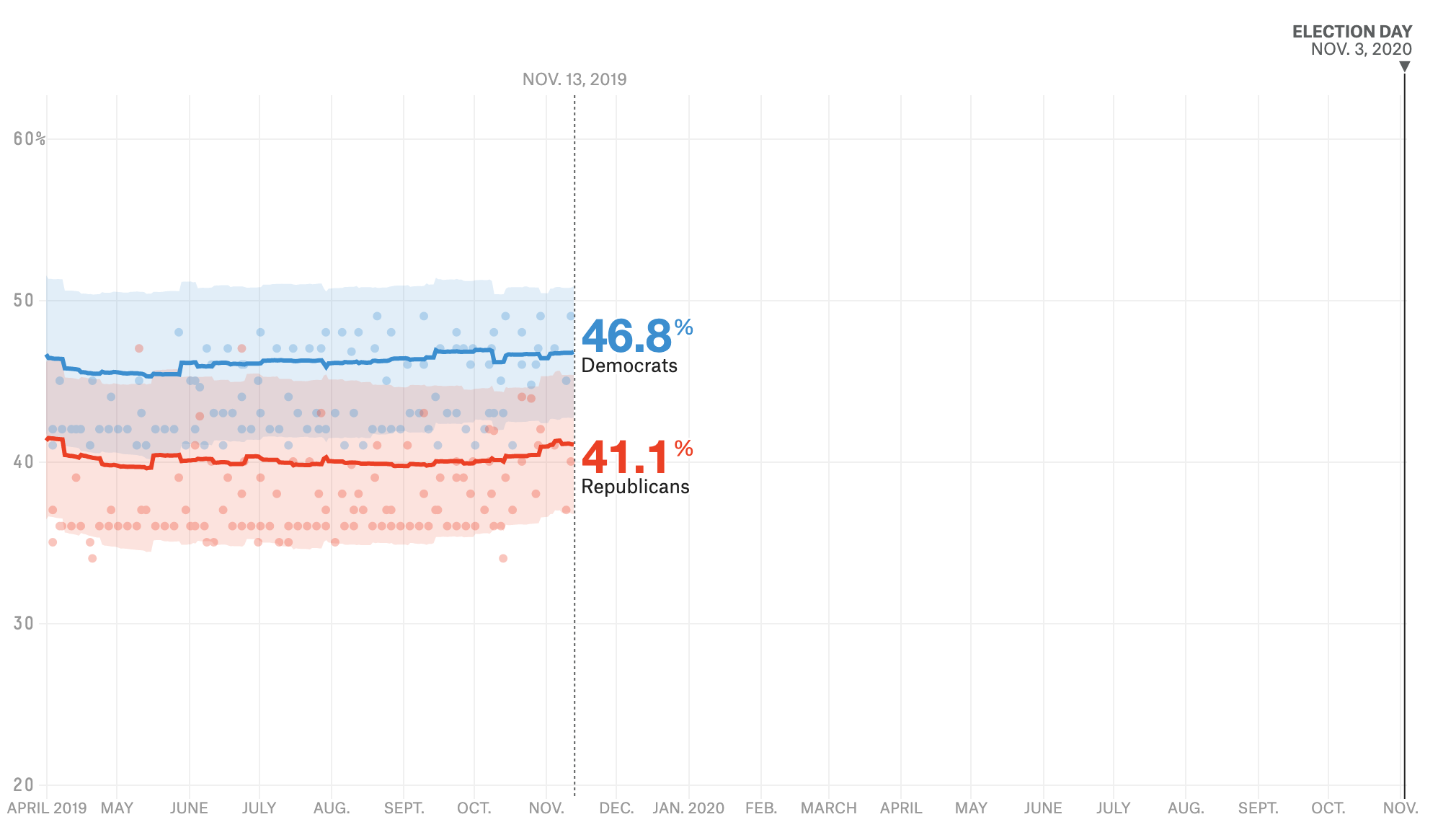