If you had walked into a Democratic party (that is, a social gathering of Democrats) back in May and asked, “What do you think of the 20+ Democrats running for president?” people may not have been prepared to answer the question. But it’s been a summer of education, as two debates have introduced the Democratic presidential candidates to a broader swath of the potential electorate. More Democrats than ever have an opinion of the 2020 hopefuls, so let’s check in once again on whether those opinions are positive or negative.

Since the beginning of the year, FiveThirtyEight has been tracking polls of the candidates’ favorable and unfavorable ratings. Those ratings are important because, unlike in general elections, primary voters are often considering several different candidates, even if they tell pollsters they have a first choice. (And at this point, only a small percentage of Democratic primary voters — 12 percent, according to a NBC News/Wall Street Journal poll from July — say they have made up their mind about whom to vote for.) Candidates who are well-liked are in a much better position to pick up support than those who are not.

By this measure, Democrats’ favorite candidate is not polling leader and former Vice President Joe Biden: It’s Sen. Elizabeth Warren, who sports the highest net favorability rating (+54 percentage points). Indeed, according to The Economist’s 2020 primary tracker, slightly more people are considering voting for Warren than are considering Biden, even though Biden is currently the most popular first choice. He leads in most (though not all) polls.

In fairness, Biden and Sen. Bernie Sanders aren’t far behind Warren, with +52 and +51 net favorability ratings, respectively. But Warren’s standing is still impressive because she is not as well-known as Biden or Sanders. While 90+ percent of Democrats have an opinion of the two men, only 83 percent offer one on Warren; in other words, a higher proportion of people who have an opinion of Warren like her. This could suggest that Warren has not yet reached her full potential and may eventually climb from third place to first in the horse-race polls.

In fourth for both net favorability and the share of Democrats with an opinion of her is Sen. Kamala Harris, who has remained in the top tier of candidates after a breakout performance in the first debate. South Bend, Indiana, Mayor Pete Buttigieg takes fifth place with a +34 net favorability rating despite relatively low name recognition, resembling Warren’s feat. Although Buttigieg’s polling surge has faded, he is still beloved among those who have gotten to know him, and he has the potential to grow, as more than a third of Democrats don’t have an opinion of him. By contrast, more Democratic voters have opinions of former Rep. Beto O’Rourke and Sen. Cory Booker (which means that, yes, Cory Booker is a household name), but they each have a lower net favorability rating than Buttigieg.

The other candidates are not as well-known, and only a few are actively disliked. New York City Mayor Bill de Blasio has managed to get 31 percent of Democrats to view him unfavorably — no small feat, given that only 56 percent can form an opinion of him. His -6 net favorability — among members of his own party, remember! — is the biggest anomaly in the field. And Marianne Williamson is only slightly better off. Her net favorability rating is -4 among the 47 percent of Democrats who have an opinion of her. Only one other candidate is underwater: former Rep. Joe Sestak, who has a -2 net favorability rating. But he has more of an excuse: He is the least well-known candidate in the race. And it isn’t unusual for low-name-recognition candidates to have roughly equivalent favorable and unfavorable ratings, as they are essentially blank slates. Many other 2020 candidates started at this point but became better-liked as they became better-known.

Indeed, much of that growth has happened in just the past few months, coinciding with the first two debates. Since we wrote about the candidates’ favorability numbers in May, every current Democratic aspirant for whom we have data3 has become better-known — many of them significantly so. (More than half boosted the share of Democrats with an opinion of them by double digits.) But this hasn’t necessarily translated to making a better impression on the electorate; 10 of the 18 have actually seen their net favorability ratings decline since May. 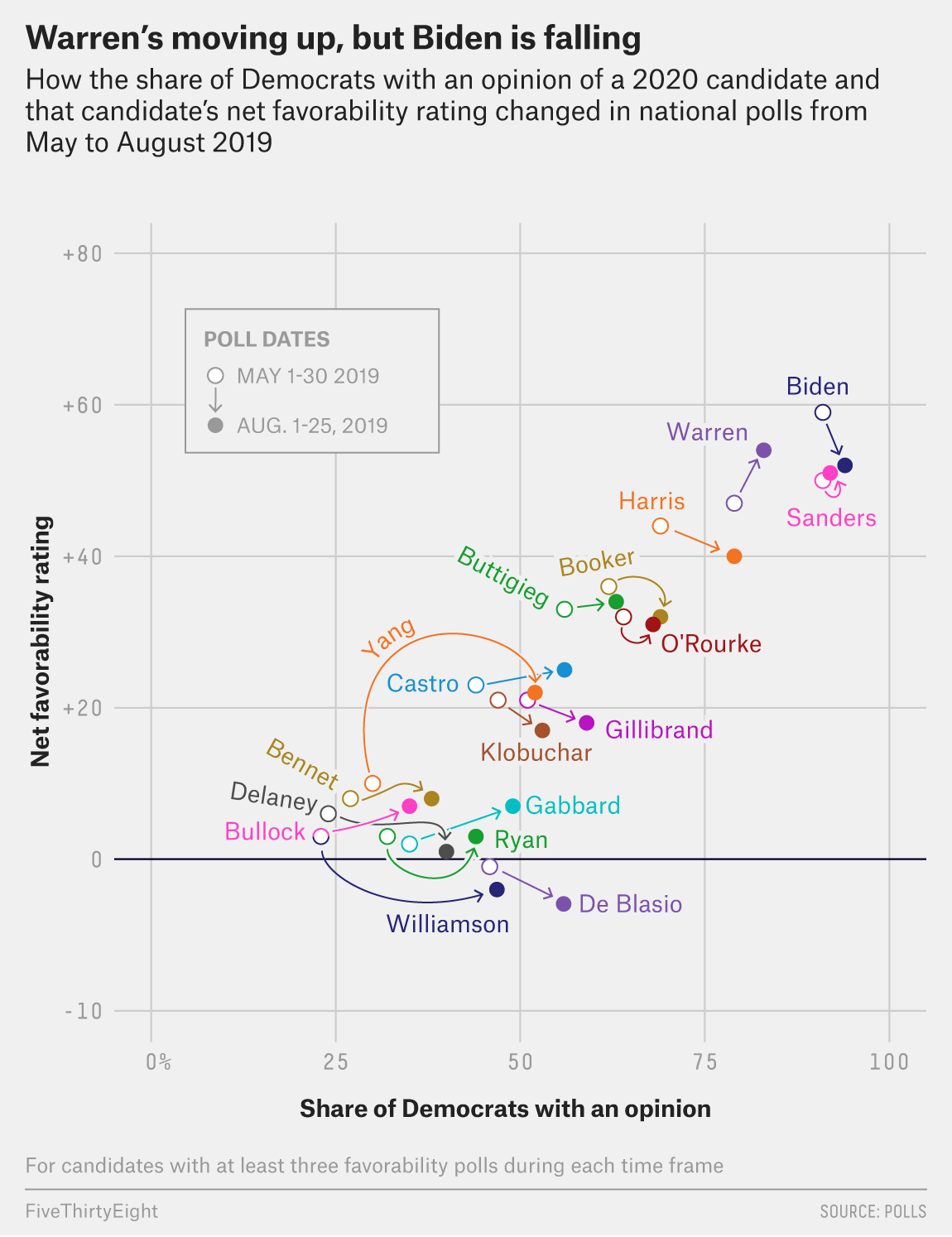 This is exactly what happened to Williamson. The share of Democrats who could form an opinion of her grew by 24 points (the biggest increase in the field), but her net favorability rating declined by 7 points. Another candidate who made big moves was former Rep. John Delaney, who greatly upped his name recognition after playing a starring role in the second debate. But audiences may not have liked what they heard, as his net favorability rating has also decreased by 5 points since May. But there were candidates who made the most of their moment in the sun. Andrew Yang’s net favorability rating rose by 12 points — around twice as much as any other candidate increased theirs — as he boosted the share of Democrats who were familiar with him from 30 percent to 52 percent.

And changes in candidates’ net favorability didn’t just come about because more people got to know them: The data suggests that some people who already had an opinion of Biden and Warren changed their minds. Warren’s net favorability rating increased by 6 points even as total opinions of her crept up by only 4. Meanwhile, the share of Democrats with an opinion of Biden barely changed (in fairness, it’s hard to increase your name recognition when almost everyone has already heard of you), but his net favorability fell by 8 points — the biggest drop of any candidate.

The debates — especially the first one — were rough on Biden (and good for Warren), but Biden’s declining popularity has actually been a trend we’ve observed since February. Comparing against an average of national favorability polls conducted from Jan. 1 through Feb. 5, Biden’s net favorability rating has plummeted 17 points so far this year. During this time period, of course, Biden went from above-the-fray party elder to active candidate under scrutiny for his interactions with women, his checkered record on civil rights and his advanced age. But so far, Biden has stayed on top of the polls, although his numbers have appeared soft at times. As the months wear on, something to watch is whether more Democrats will switch from liking to disliking Biden. If they do, then all bets are off.